A little surprise for Shanna ( @strawberry-metal ) I missed Jotanna a little much :“3 And they’re back, my motivation let me doing this lovely stuff! Also I haven’t made such cute gifts for my friends for long time~ I’m very sure she likes them :3
Credits:
Shanna by @kazekothestrange , belongs to @strawberry-metal​

Needless to say Frostbite was happy to see him!

Also fun fact she didn’t fully realize he was there yet because the dancers come in behind her, so when the crowd started screaming she had no idea why- They have been shaded uwuwu

Eos is very excited to finally meet the illusive boy on the mountain, and Zagreus is extremely confused by this excitable goddess literally glowing in front of him. hijinks ensue 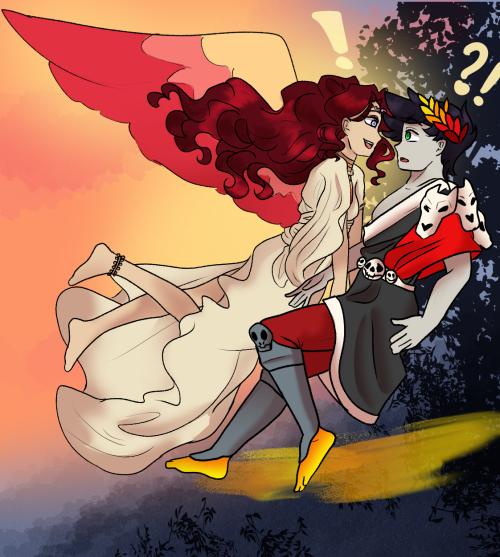 A/N: Hahahaaaa this is my first time doing something like this so pls don’t kill me <3 This is post BoTFA and everyone lives! I based this off of an animatic of my oc and fili I already made but with more emotions so here it is!!

Winter was slowly creeping in, the Battle of the Five armies had been won and the orcs had lost. Mithrandir had said the outcome was a miracle in and of itself, that the durins were fortunate they came out alive with only a few lasting scars. Kili had nearly been stabbed through his chest if it wasn’t for Tauriels impeccable timing when it came to the taller dwarf. The king only came out with a scar that adorned the right side of his temple cutting down across his eyebrow, while the blond dwarf Fili had the very unfortunate consequence of having the right side of his hair fully chopped off, coupled with a few new battle scars here and there.

Eithor propped himself up the guard wall of the balcony, eyes gazing down on Dale, it was mid-afternoon and yet the sun was setting, lights flickering on from the small window sills of the structures that sat atop the uneven landscape of the city. The half elf sighed, putting a knee up against his chest and putting his chin against the top. The elvenkings sudden announcement to the fact both he and Tauriel were banished came as more of a surprise than he thought it would have. He thought with Aeravas and Venishu on his council he would have made a more sound decision when it came to the banishment of the captain of his guards as well as his technically adopted son. He closed his eyes, taking in a deep breath and letting the cold breeze wash over him. “Enjoying the sight?”

His head snapped towards the voice beside him, seeing a blond dwarf leaning against the guard wall, sky blue eyes admiring the sight below, head against the palm of his hand, and the obviously lopsided locks that hung on his right were neatly tucked back behind his ear. Fili looked up at him, arching an eyebrow up at Eithors questioning look. “Am I not allowed to enjoy the view from my kingdom?”

The informant snorted at that, crossing his legs and reclining himself against his arms. “This is barely your kingdom, you may be the heir of it, yes. But in the end your uncle owns this view.”

Fili chuckled, absentmindedly stroking his beard, letting the air blow through the strands of his hair. Looking over at the elf currently perched next to him, looking more somber and sad than usual. Did all the elves of mirkwood brood this much or was it just those who were close to the Elvenking himself? The durin snorted, thinking of how much his brothers One seemed to sit by window sills and daydream, about what Kili wouldn’t tell him, there is only so much one can pry from anothers relative. And it appears this one was no different to the she-elf, eyes glazing over as he observed the now alight city of dale. Fili sighed, folding his arm over the other as he let out a warm breath of air, hoping to Mahal that the figure next to him wouldn’t ignore his coming question, “Why did you save me?”

It was silent, the gust whistling through dwarven ears, rustling the beads clasped tightly against the end of his braids, the halls of erebor only an echo of voices behind them, busy repairing the chaos that Smaug had left the once majestic kingdom in. Thorin’s kingly commands lost in the chasm deep within, only a whisper to the outside world, the moon shining down onto the balcony, stars and constellations decorated the night sky with an ever present glow that the elves had seemed to adore. Honestly, Fili would never have thought he’d be alive to see such a sight, maybe he’d tell Kili about this view… Maybe.

“You’re different.” The blond’s eyes widened, now his turn to look at the elf in surprise at the sudden response after a millennia of silence (or at least that’s what it felt like to him).

“And what’s that supposed to mean?” Eithor would only give him a shrug, looking up at the tiny dots that littered the dark horizon, reaching a hand up before clasping it tightly as if to catch fireflies. The elf opened his hand, and Fili could only catch a small glint of something shiny, he wasn’t sure what it was and he didn’t want to intrude. He furrowed his eyebrow as he studied the saviour that sat beside him, the elf was unbearable to be around, first he threatened him in mirkwood with his own blades. Second, instead of guarding the rest of the dwarves, the brunette had instead spent his time with the two heirs along with the she-elf. And third, he had the audacity to cut through the blonds majestic locks that his mother was sure to be proud of and had the gall to laugh at his new visage that the elf himself caused!

A battle of wit was the only thing that could describe their brief interactions with each other. The swordsman had a way with speaking, the prince himself couldn’t deny that. But Fili had his own tricks up his sleeve, he might be a reckless, foolhardy prankster at most times, but the eldest was well known to be the brains of the two brothers. Having had an interest in books at such a young age, coupled with the fact that he needed to grow up much quicker due to his fathers early demise, being thrusted upon the cruelties and hardships of the real world, needing to learn his way through it to be able to survive for the sake of both his mother and Kili. Because of this, Fili had to be sharp, thinking through each and every decision in his life, that these choices could be life and death for him along with his family.

But this was different, the two aren’t interacting the way Fili had known. If they were even at hearing range of each other, it wouldn’t take long for one to start jabbing at the other. ‘Like a lovely bonded couple’ as Balin would put it (to Filis’ very obvious dismay), and yet he couldn’t deny the older dwarf. Whenever they saw each other it would feel like clashing with a steel sword, forged with the very intent to kill you with words. From pointing out appearances, shoot downs, criticism, insults, the list would go on. Even Kili had begun to be annoyed, as they always managed to bother his attempts at woo-ing the she-elf with their incessant squabble, whether it was in the damp mirkwood cells, the hastily prepared healers tent or even his own uncles coronation ceremony, they would bicker without fail. And yet, this one lovely night, where the still atmosphere between the two was more defeaning than the sound of warg claws dragging against metal, the sound of his heartbeat present in his ear, his breathing louder than anything on the balcony. He wasn’t used to Eithor being like this, he always had something to say, he was never….. quiet.

As Fili sighed, Eithor turned to look at him, dark blue eyes looking curiously into lighter ones, searching for something, an answer, a reaction, whatever it may be, the prince could do nothing but stare into the elfs gaze. The reflection of the stars and mountains over the horizon was all Fili could stare into, he never noticed how deep the swordsmans eyes were, how they seemed to mimic the midnight skyline, only missing the bright moon. Before Fili could open his mouth to say anything, he felt himself being pulled in close to the elf, Eithors breath tickling the shell of his ear as his brows shot up. The informant hummed, slender fingers softly combing through the haphazard cut hair, two small braids woven in to hold his old clasps. He felt the figure pull himself back just slightly, and for the first time in his life, the prince felt his heart skip a beat. Eithor was smiling at him, the Eithor he’d known to be devoid of emotions other than sarcasm, the Eithor that managed to keep him on his toes, the Eithor that saved him from the clutches of the pale orc himself. it was a small smile, but even Fili himself could admit that it knocked the wind right out of his chest, he never noticed the small curves that shaped his smile, the wrinkles of his eyes as his cheeks pushed up, how his hair falls just right against his face and how he had a small dimple on the left side of his cheek.

“I’ve taken a liking to you, dwarf. It would be a shame to see you die just like that.” The brunette ruffled the dwarrows hair before he hopped off the guard wall, walking away towards where they once had come from, leather boots stopping just by the entrance as he turned to look at the dumbfounded durin, raising his eyebrow at the shocked expression on Fili’s face. “You should come down before Bombur manages to eat through all his leftover cooking and forget all about you.” And with that, he was gone, leaving Fili to stand there alone with the stars.

He sank back against the guard wall, combing his hair back as he realised just what kind of trouble he was in. “Mahal help me.”

he got Ian into plant protein, too

support me on Ko-Fi!

Lmao here’s a shitty first draft of my V, Viera, after having started a band. Screaming her pain into a mic with a cover of Never Fade Away because she misses Johnny so fucking much. I’ll finish this eventually lmao

I made a quick animated picture of din and ven kissing 😳👉🏼👈🏼

hiiii i used to @arinakaard​ but i decided to remake my blog!

Izzy: I have feelings for you.

To be completely honest, I like fics with ShowCharacter/OC because there is often a main ship of the fandom that I am usually on board for. But, in these stories the other half of the ship must reconcile or react to the fact that they’ve (sometimes only seemingly) lost their chance.

(Yes this is because I like sweet angst, hurt/comfort, and characters I recognize are assholes being even more asshole-ish and then getting reality checked by the person they’re pining for)

Totally not obsessing over this otp. Nooooo, never.

This is all I can think of rn but I’m sure more will pop up later. Hope yall liked em 😚

I was planning to work on a fic that’s been in my draft for a while, but the yearning’s for my f/o were too strong and I caved in…😔💕

A collaboration between me and @l3m0n-l4dy, a Spotify playlist of what Tyreen and Orisa would defo listen to. Hope y’all like it UwU