Ollie just wants a bromance with Bruce. He made Batman’s croutons. 😙😙😙😙

#dc kids fandome, #justice league action, #green arrow and batman bromance, #ollie queen, #bruce wayne, #batman, #christmas, #croutons, #Youtube, #why does all the heros in the jla can carry bruce like he weight nothing
1 notes · See All
momachanText

“-Oliver Queen… -Oh my God. -Will you marry me again? For the first time?”

You go, girl! These Two deserve all the happiness in the world. 🥰

“The Batman won and now he needs to rebuild, he needs to hold chaos at bay and make the world whole again. He needs you. Both of you.”

Dinah Lance did the celebrities reading hate tweets thing once, it didn’t end well for the people hate tweeting since Ollie, the birds of prey and the arrowfam decided to find these people who hated on her. 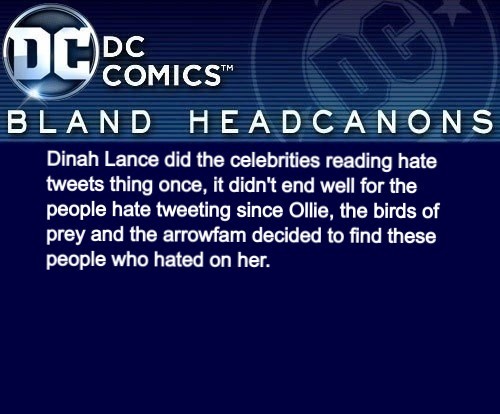 Injustice: God Among Us. Year One.

The quiver is actually a better name than the Arrowcave, Ollie. 😗

“This should hurt. I know it should. But I can’t feel anything. I’m trying to speak but my mouth doesn’t work anymore. I’m so sorry pretty bird. I thought we’d have more time. Dinah. The prettiest girl in the whole damn world. I was so lucky. ”

Injustice: God Among Us. Year One.

Take me out to the ballgame. 🎶🥳

i actually could see that going swimmingly well possibly better than ollie and roy even - go check out this post real quick for my reasoning there - the fallout that happened between ollie & roy, when ollie went off with hal, would likely not have happened with dick just because dick would have clocked ollie’s actual intention easily (he’s always been able to see past bruce’s bs and give him the benefit of the doubt, for crying out loud, ollie wouldve been an open book in comparison). that, and. the fact that ollie & dick already had so much in common. imagine the glee, if ollie had had a sidekick that wanted to go by robin. ollie’s total disregard for lax idea of discipline & rules & such, would have been interesting to apply to dick too… he probably would have turned out so different… a lot less hungry for approval, that’s for sure, considering how free ollie is w his praise for his kids.

agreed i think people that aren’t familiar w ollie don’t know that he’s just like that really he has a prickly personality (like bruce ironically, only ollie makes up for it w a sense of humour and lots of snark), so when he snipes at someone, people interpret that as him hating the other person. that’s not necessarily true, if ollies genuinely angry its a sort of quiet anger* not his default explosive kind. so yeah it can be hard to tell when ollie actually dislikes somebody, and when it’s just his typical carlinesque misanthropy showing through. esp when you compare it with how he behaves around his family, b/c he’s by contrast a very loving father and grandfather and husband

“hate”… is a strong word the animosity between ollie and bruce isn’t half as bad as the one between hal and bruce (pre-reboot i mean, ig the halbruce shippers must be drawing from somewhere in current continuity). i’m p sure hal’s actually banned from gotham lmao but don’t quote me on that, i’m no hal expert.

don’t get me wrong though ollie & bruce aren’t each other’s biggest fans either, but in life or death situations they will & have helped each other out (sniping the whole time but still). on bruce’s end it probably began with that time dinah kinda led him on only to bro-zone him in the end to date ollie instead, though that was silver age so if you don’t want to consider it canon ¯\_(ツ)_/¯

on ollie’s end, it’s a lot of things, he thinks bruce’s methods of fighting crime are a tad authoritarian (i’m talking maggin/o’neil era, not grell-era where ollie toys w authoritarian-leaning stances himself. not that that really counts b/c his title was isolated from the rest of dc continuity at the time so bats wasn’t relevant there + when ga was re-smushed w main continuity he stopped killing). but imo that was something that ollie was like willing to agree to disagree on, he never wasted an opportunity to drag bruce about it, but he never really took a hardline stance of refusing to work w bruce over it either.

the real split happened when hal… did a bunch of spoilery iffy things, and bruce stopped trusting him. like, before hal’s return ollie was defensive about him yes, but not in a way that ever really absolved him of his actions? so he wouldn’t get all up in arms if bruce and the league talked shit about hal, but he would be like “okay but consider… hal’s just misguided… hal’s just trying to help…” or similar? after hal’s return, though, ollie’s attitude shifts to “okay he’s back now and good again so let’s all just forget the whole thing happened and move on!”

which of course bruce refuses to, even when the others do (identity crisis didn’t exactly help endear hal to him either) sooo this is the point where you can like… clearly map out in canon when ollie turns, i would sell batman out for a dime 💀 he’s also probably mad about bruce disrespecting dinah’s authority when she’d been chairwoman of the jla. also also he often side-eyes bruce’s - questionable parenting

#meta, #dc, #ollie queen, #bruce wayne, #anon, #replies, #90% of the time. when, #ollie holds a grudge against someone, #like a serious one and not his usual snark, #it's over hal, #like w kyle or barry for instance, #hal's his only friend ok sue him
15 notes · See All
wei-smilerText

Ollie bought earplugs and invested in shatter-proof glass for his apartment. Dinah was very happy. 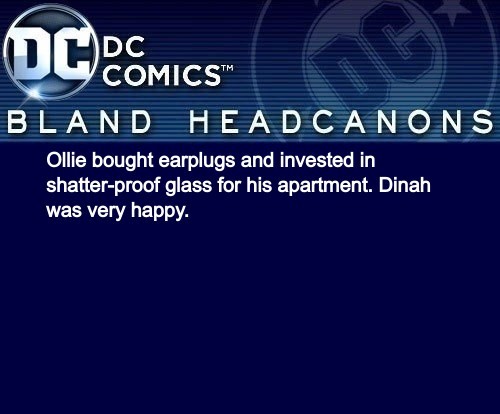 Lian Harper is autistic and uses stim toys that Oliver buys for her. 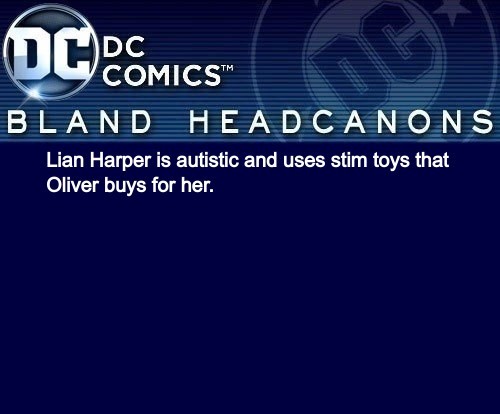 oh, ik that, i just think the idea is fun! i basically have it that during the time when ollie was drunk a lot of the time, he was at a gala or something and he and bonnie hooked up. bonnie realizes green arrow (who doesn’t appear for a good decade after this) is probably ollie pretty quickly because honestly green arrow being ollie is an open secret in star. she still has feelings for ollie and wants to be famous so she becomes miss arrowette and starts hinting that ollie might be cissie’s dad, especially after cissie becomes arrowette.

she is! it was hinted at for a while in young justice that she might be and you know what,, i like it. it’s fun. let ollie have a truly ridiculous amount of secret biological children.

“Why is Roy’s kid so sweet while Liv is a little hellion?” Ollie asked, massaging his temples.

“Sin can be a little brat too, don’t act like she isn’t. Also, she’s sixteen and I took her in when she was six, which is just a tad bit different from a five year old that is biologically ours,” Dinah interrupted, rolling her eyes.

Hal decided to interject here. “Livvy’s just…very much her parents’ kid. She has your guys’ fire.”

“And your stubbornness,” Dinah added, poking Hal in the chest. Next to her, Ollie was nodding emphatically. “You’re as much Livvy’s parent as we are!”

Hal held his hands up. “Hey, I’m not arguing with that,” he said. “You know I love her. She’s definitely my daughter.”

“Good,” Dinah said, as she leaned forward and brushed a lingering kiss against the corner of Hal’s mouth while wrapping an arm around Ollie’s waist and tugging him closer to them. Hal obligingly wrapped an arm around each of them, before returning Dinah’s kiss then pressing one to Ollie’s temple.

a week ago I could barely Ollie