A scene for two—originally written as Man (M) and Woman (W) but could be any gender with some textual adjustments. I wrote this years ago as an exercise to challenge myself to write conflict (I’m very bad with conflict. Writing it, or engaging in it) and I’m pretty proud of what came out. Enjoy!

#spray paint, #tech, #one act, #theatre, #I was painting a stool okay, #you gotta get all the angels, #ant rant
2 notes · See All
pawneecityschoolPhoto

On the Road Again!

It’s time to hit the road and drive north!!  The cast, crew, coaches, and parent sponsors have loaded everything onto their Windstar bus to make the trek to Norfolk, NE.  Tomorrow, December 12, they will be competing in the Class C2 State Play Production Competition in the Johnny Carson Theatre.  Other schools competing are Alma, Hartington-Newcastle, Sutherland, Cross County, and Loup City.

Updates on the team’s progress will be posted as pictures and information arrive back to Pawnee City.

We wish you all the best!!! 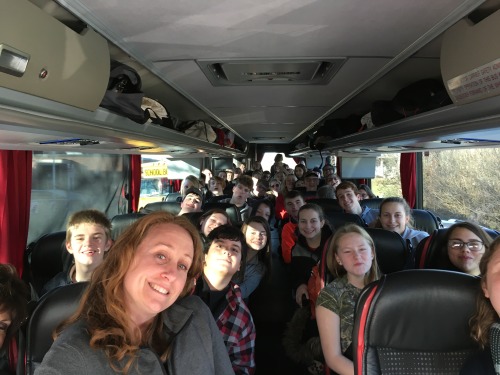 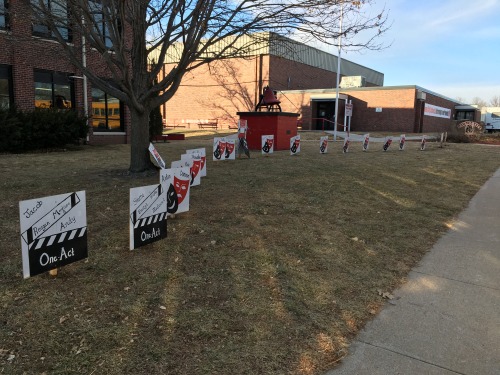 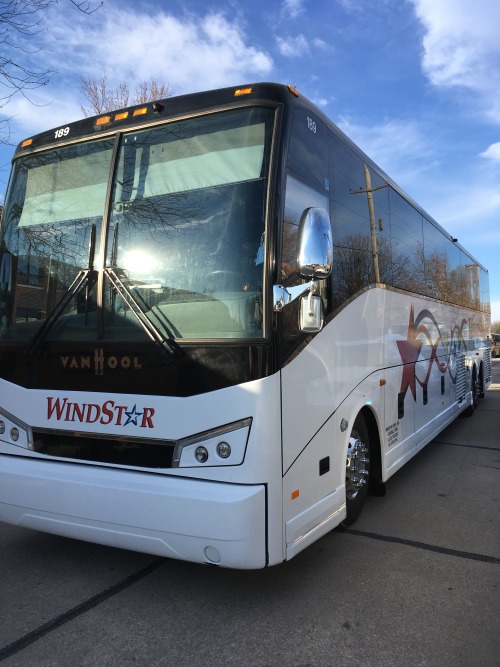 #One Act
2 notes · See All
pawneecityschoolPhoto

Send-Off for the One-Act Team

On Wednesday, December 11, a pep rally is held for the One-Act Team in the school gymnasium.  The entire student body, staff members, and people from the community watched as the One-Act cast, crew, and coaches competed in running obstacle courses, built towers out of Rolos, and played a game of charades.

Run by Ms. Kristi Robison, the pep rally served as a send-off for the team as they travel to Norfolk to compete in the State Play Production Competition. They will perform their show, “Dark Road,” at 6:00 p.m. on Thursday, Dec. 12 at the Johnny Carson Theatre.

Good luck to all!! 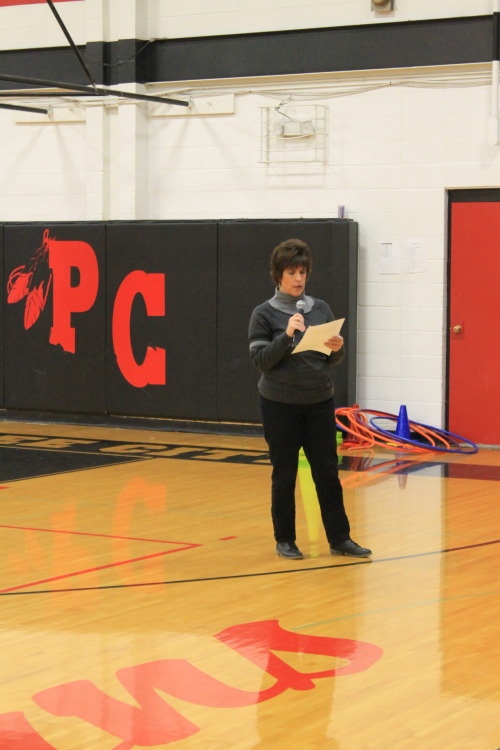 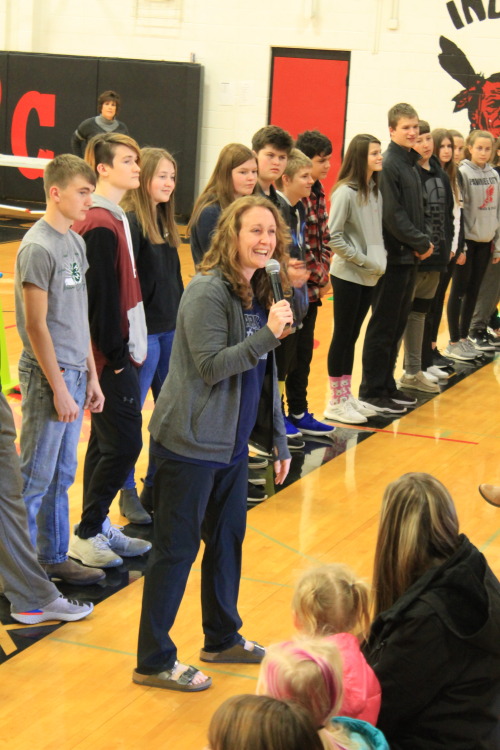 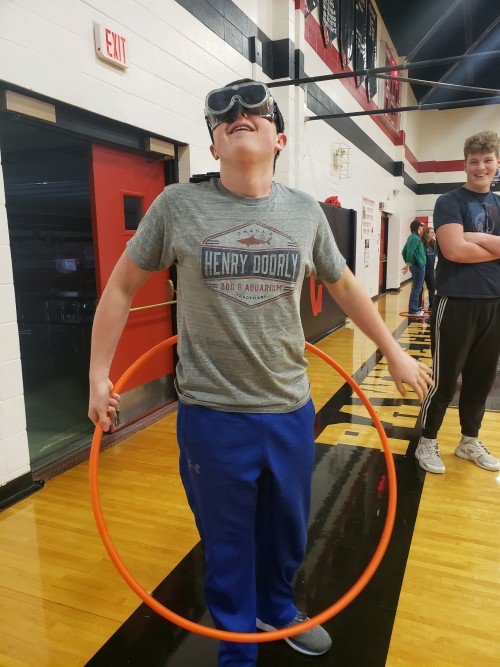 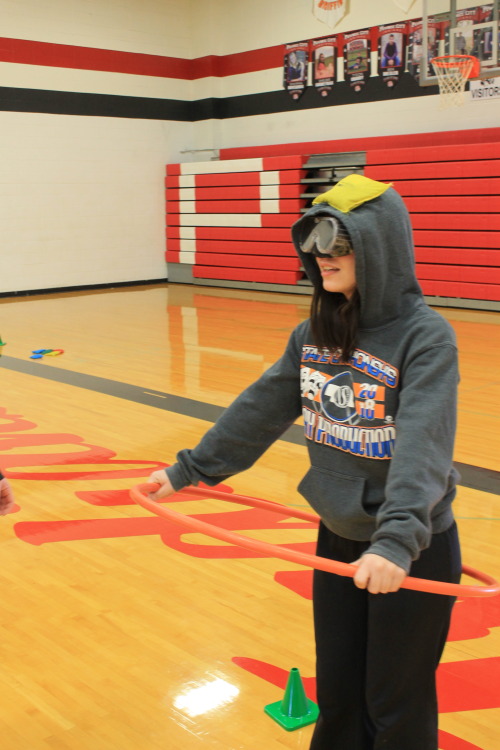 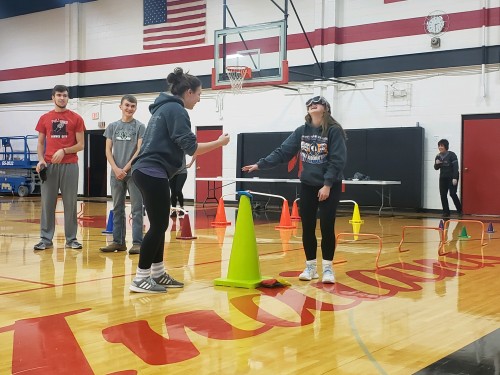 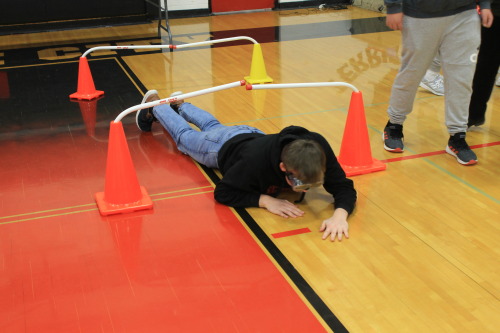 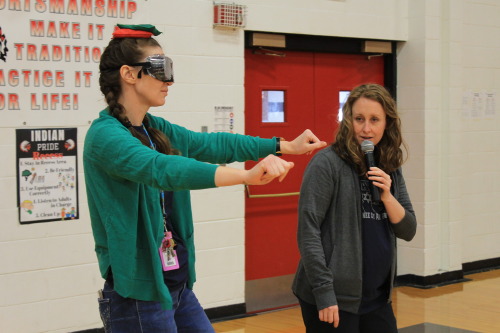 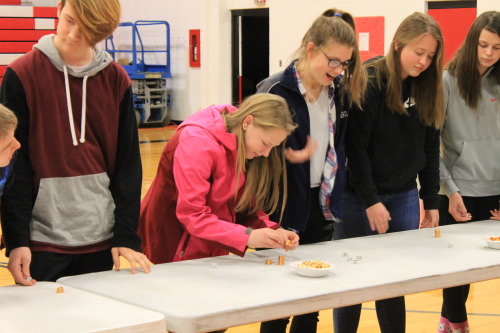 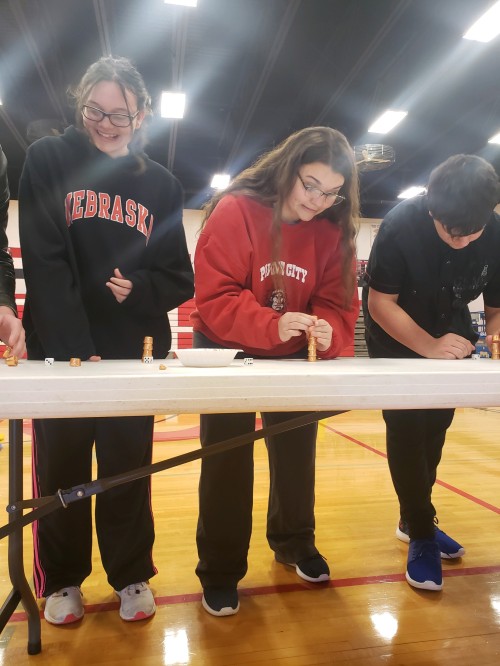 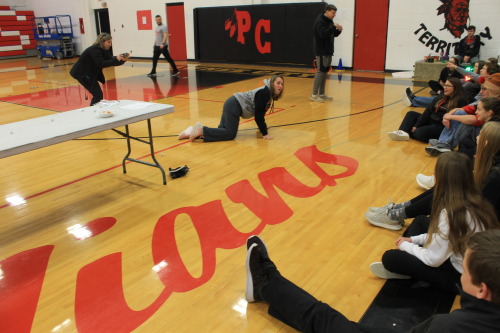 #One Act
2 notes · See All
pawneecityschoolPhoto

The Pawnee City One-Act team wins Districts at Palmyra on December 4. Their morning began with them leaving the school at 7:45 AM and heading to Palmyra, which is where Class C2-1 Districts were hosted. Once there, they watched a few plays, ate lunch, and began getting ready at 11:30. Pawnee City was the last school to perform, with their performance being at 2:45.

After their performance and critiques, the team waited anxiously for awards, which was around 4:15. They first announced awards for individuals on each team. Reyana Tegtmeier, Larissa Tegtmeier, Olivia Gottula, Tristen Bradbury, and Shawna Boverhuis were all given an Outstanding Performer award. Finally, it was time to reveal the runner-up and champion. In all classes, except for Class A, only the champion qualifies for State. The speaker announced Elmwood-Murdock as runner-up and Pawnee City as the winner!

Olivia Gottula told us about certain things she was working on for the performance, stating, “I was very nervous before Districts. I knew it could potentially be the last performance, and I wanted to do my best to get us to State. I really focused on my ‘cheat-outs’ and being loud. I wanted to make sure the audience could see me and hear me, especially because the stage was in a gym and it was hard to hear other people’s plays.”

Reyana Tegtmeier then expressed her thoughts about the team getting first, explaining, “I honestly thought I might cry if we got first or if we didn’t, but I actually just felt relief. I felt relief in the fact that I got the privilege to help carry the One-Act team as the lead to State, because I know I would have blamed myself if we would have lost. So honestly, once they announced  ‘Dark Road’ as the winner, I could finally let out a sigh I had been holding inside all season long, and it was so great.”

Pawnee City’s One-Act team will be traveling to Norfolk Wednesday afternoon for their state performance, which is on Thursday, December 12 at 6 PM. 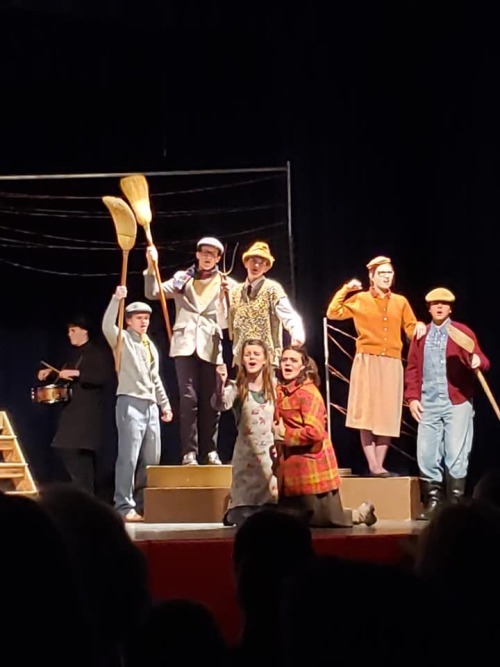 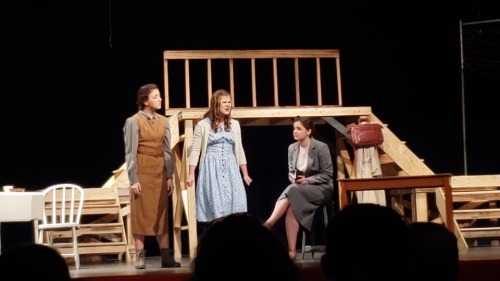 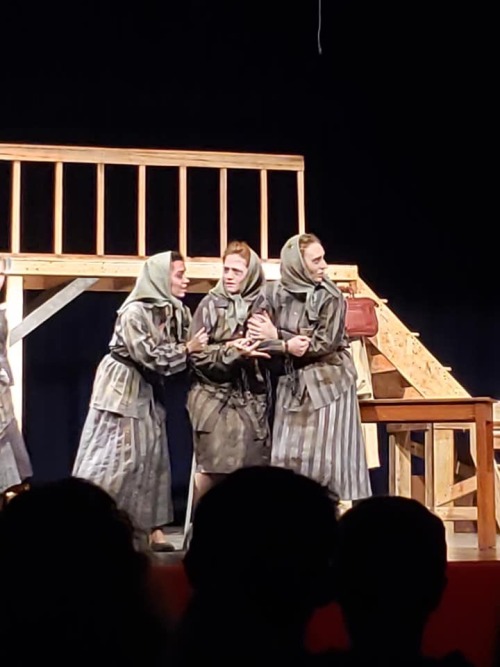 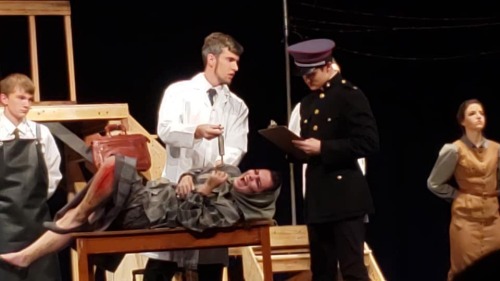 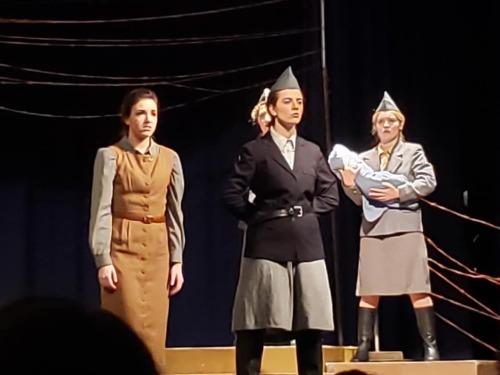 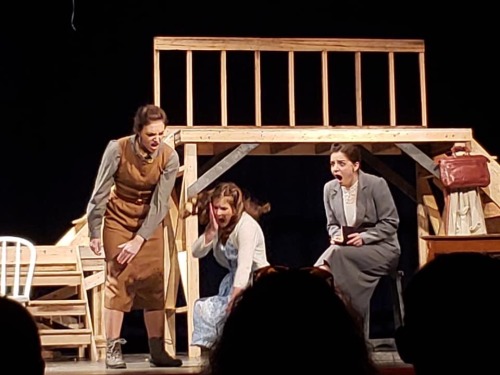 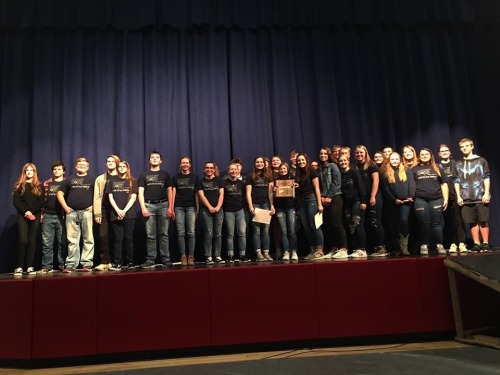 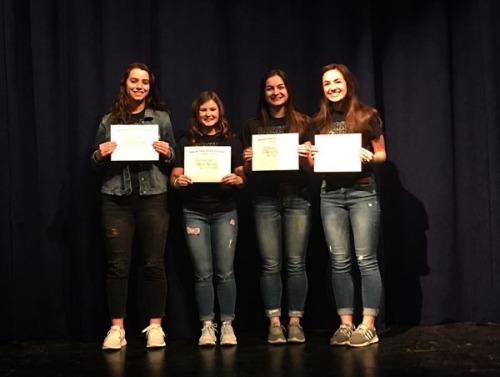 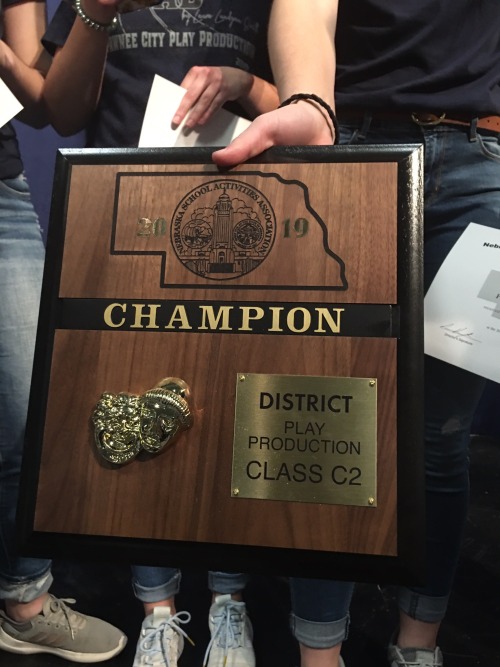 #One Act
2 notes · See All
phillipkwriterText

Screenplays are different from stage plays as their formatting and productions are very different. This is the one act that was one of the 5 winners picked to be produced by the Institute of the Arts.

Sadly, it was their first and last one act festival as their marketing dept kinda dropped the ball and we played to a near empty house. I’m still proud of the script and think it makes for a funny, little one act. And I still enjoyed the $50 prize… I spent it all on props for the show.

Oh my gosh you guys, I know not a lot of people follow me, and the ones who do most likely do not care, but I just finished writing my first play and it feels absolutely amazing! I’d write out the full plot, but that would be a long and annoying post, so instead just know

If you can’t tell, I worked really hard to get a good amount of diversity. If anyone actually wants to hear the plot (bc yes, there is an actual plot) I’d be happy to share!

Summary: Poppy Salem, teenage witch, has the unfortunate role of playing “babysitter” for the undead monsters living in her apartment building, ranging from a vampire who binges on garlic bread to a swamp monster who protests for environmental protection. Chaos reigns when Poppy’s thoroughly non-believing boyfriend stops by for a visit.

Warnings: Minor kidnapping joke and mentions of violence, but what can you expect with monsters?

Word Count: 6523 (on the doc; some information deleted here)

GIFs from ‘Teeth: The Musical?’ a one act play I wrote and directed at Tenafly High school in 2005.

hey so i mentioned this in a previous post BUT this past year (my senior year of high school), I wrote, designed, and directed a one act play for my school’s spring one-acts. i’d love to talk about it here, if anyone cares? or answer questions about it, because it was a very fun and rewarding experience and i have knowledge now to share haha.

#play writing, #one act, #pls interact with me i miss you guys.
4 notes · See All
1stutilityplayerText

Two years ago, I felt like they did. And we swore we would never become the way that made us feel like we did two years ago. But here we are, on the other side of history this time.

#personal, #sigh, #one act, #i wish i could talk to you, #but you would rather be talking to him, #alone
1 notes · See All
flamingerrsText

Never thought I would see the day I got to play a lesbian lover in my high school’s One Act Competition. I’ve finally reached peak gay.

#we had subsections today, #sadly we didn't make it, #but i'm still happy with our performance!, #a random flamingerr, #one act
5 notes · See All
horrific-spaceText

It’s competition day. Today is the last showing of Us and Them with the crew. I know we all go to the same school, but I’m gonna miss spending four days a week after school with them. I’ve grown to love them all, and I’m so proud of everything we’ve achieved, even if we don’t win today. I may only hang out with like two of them regularly, but I now think of them as family. and I’m going to miss this dysfunctional family of misfits. I’m getting emotional while typing this. Anyways, I hope we do great today. Wish us luck.

#richie.txt, #play practice has turned into play showing, #us and them, #competition, #one act
6 notes · See All
highschool-is-wackText

“Sophie, what size feet do you wear?”

“Watch where you’re putting your lips, it’s engaged to Caleb.”

when you have 3 co-directors and you get blocked (the movement for a scene) a certain way and then none of them communicate to each other so you get yelled at for not doing the right blocking :)))))

New OCs!!  They’re for a One Act I’m calling “Shore is Love” 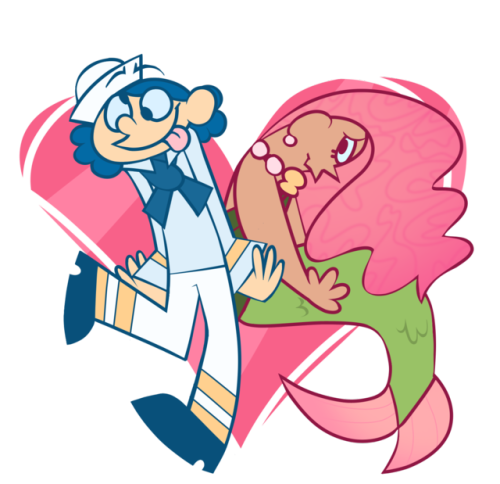 “Where I come from we stack pancakes higher than you!”

In waiting for tomorrow because callbacks for One Act will be posted and good lord I’m dying.

The title of the production in in right now!! I’ll be Ms. Wiley. Wish me luck!