Thank you! 💙 and GOD yeah Suiryu really just rejuvenated why I disliked his character so much. His manga counterpart is much better, a little misguided but he has the spirit. Then ONE is like “Mmh- no, needs more misogyny.” His webcomic self is definitely like nails on a chalkboard.

It was honestly really funny Bc I might not have Garou be my FAVORITE character, but this chapter alone really did point out something to me that made me put on the top: he matured.

If this was the same ol’ “hero hunter” garou, he would have done just about the same thing as Suiryu was trying to do and beat the enemy until they’re incapacitated (or dead, if you’re a Neo hero). So, after losing his job, getting his cargo destroyed and losing his friend, what does this lone wolf do?

Even when Suiryu ruined everything, he really didn’t try to throw more hands. The damage was already done, he knew it was finished, and so he left. I really do like how he took a beating and still intimidated Suiryu.

Here’s to hoping that they get a rematch. Suiryu REALLY needs a lesson in humility (hopefully by his sister)😤

Treat: Metal Bat loves. LOVES. LOOOOVES it whenever he’s out with his s/o and his little sister, and they’re all holding hands or even swinging his lil’ sister between them. Here is an artist’s rendition:

BEAT IT UNTIL IT DIES.

So, Chapter 133 was definitely a lot more action than I expected, but I want to bring up several aspects:

Number one: turns out that mail guy wasn’t as bad as anticipated !

For once, Garou actually made a friend who isn’t shorter than his hip

I genuinely liked this little sliver of interaction. While Garou seemed a lot more stiff and refuted the offer, I kinda interpreted it as him just being humble. That is- until trouble brews just around the corner based off of his identity.

That trouble being, of course, Suiryu and the Neo Heroes. This scene reminded me so much of when Garou fended off against 8 Class A heroes:

C) The consequence of his retaliation strains his established relationship.

As I’ve stated prior, ONE really does drive in the fact that being a hero is to be comprehend unnecessary destruction. The excuse Suiryu says honestly grates my nerves.

“This guy is extremely dangerous!”

Funny how Suiryu completely forgot who threw the first punch.

On the aspect of the barrages of blows, one thing I like to hypothesize on the Mech Suits is that it can enhance the nerves of the wearer and prompt them to, essentially, break their limiter. The limiter, in this case, is knowing when to cease—

Therefore, knowing when to give your opponent mercy.

The Neo Heroes truly do have a very similar ideology as Blast when it comes to the execution of the enemy: there are no exceptions. Be it that enemy is an 18 year old kid who’s just a delivery driver or a 600 foot monster.

concrete logic without abstract thinking can truly take the light from a hero’s eyes.

No, they’re not going to do multiple movies of Season 1, carefully adapting the manga 100% faithfully at the same pace as the anime, it’s pretty much guaranteed to be rushed to end the standard Hollywood movie with Saitama vs Boros. So if they DO try to adapt every single arc… each of them will be 10-20 minutes without much explanation, development, or any meaning at all.

But what if it DIDN’T try to adapt all the material? What if… it only adapted two arcs in full: the House of Evolution and the Alien Invasion? (Edit 2)

Why those two? Because…

While the other arcs..

#II. How the movie could work: 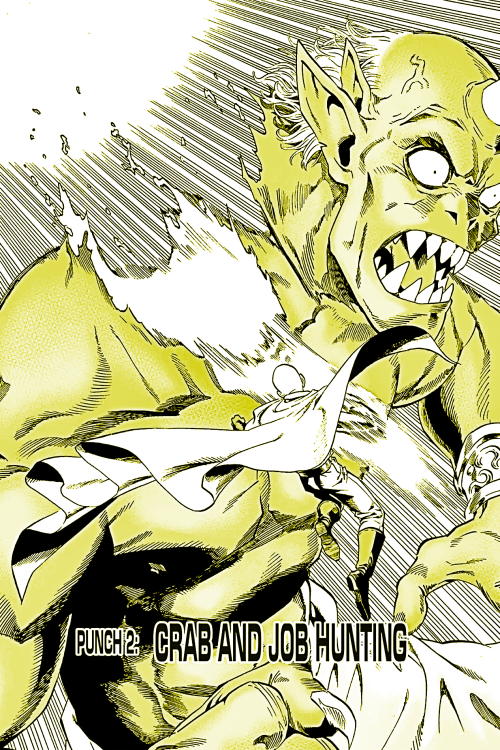 Genos is pretty fucking awesome, but needs to dial it down a bit towards Saitama 😆

I dug out my mic and decided to play around a little bit! Pls enjoy

I’ve decided to open my matchup request for OPM bc I need some more writing experience. I also will be using underrated characters and PEASE be specific such as gender, sexuality, hobbies etc, please send them in!

I gotcha, anon. Sorry this is so late! I took forever trying to gather these panels and despite my efforts, they are mostly potato quality. Thanks for your ask, though! ❤️

In no particular order:

1. Fubuki putting the fear of God into Do-S

It’s not often we get to see Fubuki tear shit up, and I think this is the one of only few times we’ve seen her use her signature move in the manga (not counting that one omake where she fucks up all those little spiders). It was up until this point that I thought of her to be super… weak? Like, I thought this whole time she was just using her status as Tatsumaki’s little sister to wrangle up a bunch of hooligans as her underlings but I’ve found that to be a fat fucking lie. She’s super badass in her own right. She even resisted Do-S’ love magic whip thingy because her will is just that strong.

Fubuki doesn’t need to be Tatsumaki’s little sister to be feared, she just needs to be pissed off.

Darkness Blade was also involved somewhere but this ain’t about him. Moving on:

2: Do-S would’ve straight up merked Amai Mask’s crackheaded ass had he not been an actual freak of nature

(Sorry for the microwave quality pictures but we’ve all read the manga right? Just use your imagination.)

So, prior to Murata reworking the entire “Amai Mask commits homicide via his own damn hands” segment with Do-S, we had Do-S basically surrendering herself to Amai at the sight of him dicing up her love slaves at the speed of light (the merc squad). I did not like this AT ALL. I thought Do-S was a kickass character and for her to have this stupid death scene was really disappointing.

Amai Mask pretty much slams her skull into the wall, gives her like 13 concussions, and when he thinks he’s in the clear—BAM! Elastigirl powers, bitch! Do-S wraps herself around Amai and utilizes her freaky ass Alien-esque snake tongue to drill into his eyeball as her last stand before death. And this is why I think it’s valid that Fubuki had such a hard time dealing with her, because if it were any other S/A-Class hero (besides Zombieman, Superalloy, Genos… and maybe even Metal Bat) that got their brains drilled into via snake tongue, they would’ve died. If it were Child Emperor, Puri Puri, or even Atomic Samurai at the other end of her attack, they would’ve been FADED, man! It’s only because Amai has those bullshit monster invulnerability powers that he survived.

In conclusion: Do-S got done dirty the first time around, but Murata has since redeemed himself by giving her some wicked elastic powers and nearly dealing the final blow to Amai before dying. She’s also rlly sexy uwu

3. It is written somewhere in the Geneva Conventions that using Captain Mizuki’s thighs as a means of destruction is considered a war crime

Second of all: UUUH??????? This is 100% just Murata’s death by snu-snu fetish in action but I’m not complaining. Mizuki is super badass. I’m not a fan of this trope that women in male-dominated media have to give up their femininity in order to be taken seriously, so I was expecting at least one female character in OPM to be a mirror reflection of this shitty trend (judging by ONE’s track record of being allergic to women). However, OPM is all about taking tropes and putting them in a meat grinder. Mizuki is super feminine, bubbly, and positive! And that doesn’t make her any less of a fearsome opponent to these monsters, which is something I can really appreciate.

Overall, OPM has very few female characters (which is bad), but the treatment of the few we have is very good when compared to other media of the same medium. I’ve said before how I enjoy the fact that both sexes are treated as equal opportunity fanservicing, and I think it’s fitting to reverberate that here.

Mizuki is hot as hell, but she’s also strong, fun, and a ray of fucking sunshine. Her and Mumen would be great friends, now that I think of it!

She’s so badass in the entirety of the surface strike sequence we get before the heroes enter the Monster Association base (take a shot every time I say badass. Try it, you’ll die).

I was super impressed by how strong she is?? And the whole time I’m reading this fight sequence I’m just like…. why aren’t we seeing more of her. She should have just as much screen time as Stinger! She was even noticed by Ninja Extraordinaire, Flash Flash; and she played a pretty big part in getting the S-Class to open their eyes to the combat prowess of the lower classes. If it weren’t for her, I fully believe the strike team would’ve had a much harder time penetrating the monsters’ defenses.

Also she’s cute as hell. All of the other female characters in OPM are over the top supermodel sexy (again, not complaining), so it’s refreshing to get someone that goes against the status quo (which as I’ve said before, OPM is kinda all about). Whenever we see her unmasked in those little volume extras Murata makes, I just want to squeeze her cheeks like an annoying aunt.

I forgot to mention this in the Mizuki section, but I think it also applies here: her teammates never point out the fact that she’s a woman. There’s no commentary on it, no snide “oh hurr hurr you’re a girl under the mask?” comments, just women kicking ass and male counterparts kicking ass alongside them, which is another thing I appreciate. It’s not often we get women in manga just…. existing. It seems there’s always gotta be a good reason for writers to insert female characters into their stories (WHY), but not here. Shadow Ring’s sole purpose in the story is to kill monsters and look cool while doing it. She gets the same treatment as all the other himbos around her.

5. Lily being 14 and always ready to murder

Lily stole my wallet and kicked my ass :( 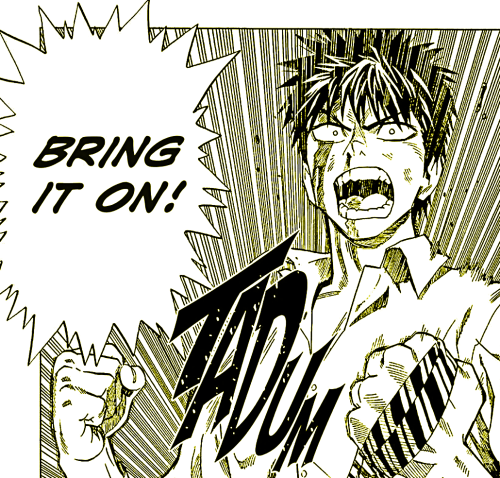 Which [3] animes would you most recommend? 🤔

Once Mob reaches 100% there is nothing from stopping him from reaching his full power!

Unleash the psychic within with this t-shirt before it’s too late! Get it today !

I have thoughts on the new webcomic update. Spoilers ahead

1. The fact that Garou was literally just working when the bro heroes attempted to attack him was just. So awkward for the neo heroes.

2. Idk how much time has passed in the webcomic from the monster association arc to present day, but Garou wasn’t doing anything since Saitama talked him out of his hero hunting.

3. Garou had nothing to do with the neo heroes, that was the hero associations battle

3b. If the monster association couldn’t turn Garou to their side, then the neo heroes won’t be able to use Garou as an asset either. Not that he would fall prey to them anyway.

4. If the neo heroes need the heroes to keep their brain and head safe so that even if they die they can turn them into a cyborg, then why don’t they all have helmets?

And I guess Suiryu got to fight the wolf man after all.

And One really does a good job at capturing emotions on his characters faces, like when Suiryu realizes he can’t control his actions, he gets this look of fear on his face. Fucking amazing

It’s not just SpongeBob down under the deep blue sea… 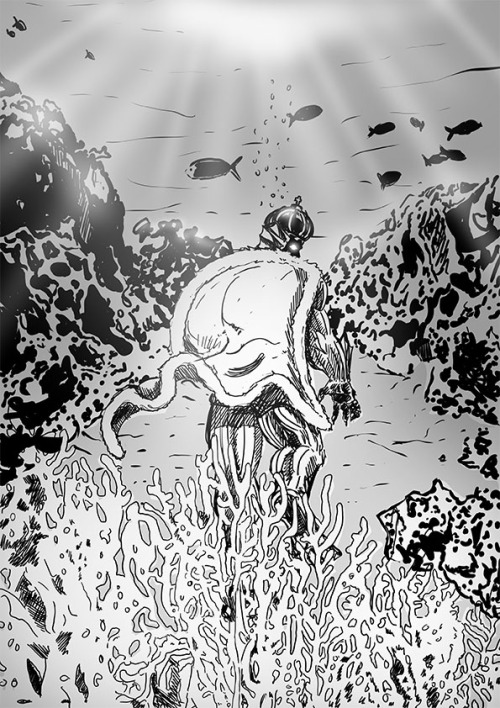 One punch man - ONE and Yusuke Murata

Nice to see Garou is back