Just for the lols.

Avitas: I’m proposing to the greatest woman in all the worlds.

Helene: I can’t believe you are stealing my husband!

Helene: The Empire is the greatest woman, man, son, and daughter in all the worlds. It is my whole damn family, including, but not limited to, my husband!

Avitas: Uh Helene, I was going to ask you to marry me.

Helene: ARE YOU TELLING ME TO CHEAT ON MY HUSBAND???

i need a new dom tony fanfic right now or i’m going to die, i can’t stand their lack of content anymore.

It’s not often that we see Hailey touching Jay’s table, it’s always been him on her table. So when I saw this I was taken aback because this is the scene when she gives him an ultimatum to been partners together or she finds a new partner.

*two hours before Character A and Character B’s wedding ceremony*

Character B: “Dude, I need your help, like, right now.”

Character B: “I’ve lost something important.”

Character C, facepalming and sighing: “What is it?”

Character B, anxious, whispering: “Character A!”

Character C: “What!? How on Earth did you lose A?”

Character B: “So you know Character D, the one I fight with sometimes? Well, one of his minions materialised in our bedroom this morning and swooped A away! Apparently D didn’t get the memo I sent to tell him that he couldn’t kidnap either of us today!”

Character C: “You send each other memos?”

Character B: “Yeah, of course we do. Can’t go interrupting the important stuff. We’re enemies, C, not dicks. My note must’ve gotten lost in transit.”

Character C: “O..kaaaay. So, what do we do? Do I tell the guests that the wedding’s canceled?”

Character B: “No! They don’t know that I’m not a normal person! We can’t do that!”

Character C: “Then what do you want me to do about it!?”

Character B, pulling out a piece of paper: “This is the address of D’a HQ. You have to go and explain what’s going on.”

Character B: “Yeah, sometimes, but he owes me a favour from the time I let him escape so he could go to his sister’s baby shower. Don’t worry, it’ll be fine… Just go now, please… I need time to convince A that marrying me is still a good idea.”

“It’s ok, You have nothing to be afraid of because

No matter what happens, I’m going to protect you”

I had to say, Harumichi is my ultimate otp, but I kind of dig the ot3 with Setsuna…

I used them as a ref:

I should have probably put Haruka in the middle, but Michiru snogging Setsuna was on my mind it seems…

I’m not sure if the 3 of them have a ship name outside of “Outers Family”? 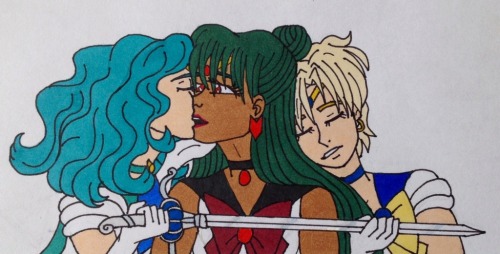 Are there any imagines/prompts/fic idea out there for the Scrubs fandom? I’m interested in writing a little something but I don’t have any ideas.

lmao this is too perfect

Love white and black gifs, so am sharing it with you all

My otp is grindeldore which is extremely tiring due to THE LACK OF CONTENT WHICH IS JUST BS BECAUSE IT’S LITERALLY CANON LIKE WTF, although I have come to the conclusion that the most popular ships are almost always not canon. Anyways, I love the fandom because of how much quality fan art there are but I also hate it due to the lack of quality fanfics. What makes it worse is that I’m very picky when it comes to fanfiction especially with grindeldore because I literally NEED fix-it fics and happy/alternate endings or else I physically cannot read it.