Captain Aviva of the Unreliable

Hi! So I am here to describe my captain for the first time on this thread!

Aviva is a natural red head with pale skin and orangish-brown eyes. She is extremely thin and lanky for a woman’s standard. What she lacks In her bodily strength she makes up for in her intelligence, wit, agility and persuasive abilities.

Aviva was never really a authority figure, so assuming the role of captain was a bit of an awkward transition for her and the crew. Thought new to the role, she wasn’t a pushover or naive in anyway.

Due to her background, she isn’t the most trusting of other people and harbors a lot of self doubt. She doesn’t hold herself in high regards and a lot of the time thinks she doesn’t deserve any happiness. She boarded the Hope in hopes of finding a better life for herself in Halcyon, only to get more problems (lol). Her personality is more of a laid back one. She is quick to mentally question people, but won’t judge. She enjoys the little moments more than the extreme. Though she hardly ever thinks if her own happiness, she loves to make others feel happy. She is extremely kind, compassionate and has the best intentions at heart, thought she wouldn’t admit it in a million years. She built her reputation on being a strong person who isn’t bothered by anything and never gets hurt.

So I’m, yea that’s my brief summary of my captain, I hope you enjoyed?

Sometimes when I use the Internet, I get adverts that say there’s hot singles in my area. I’m standing in the middle of a barren wasteland and the only thing nearby is a small feral canid pack. Are they what the Internet classes as hot singles? Am -I- the hot single? Is this Hiram’s way of telling me it’s over? These stupid questions keep me up at night, along with many more of the same depth :/

“You mean there’s an entire fish made out of Saltuna?!” Is the most himbo thing anyone has ever said and I challenge all of you to show me a more himbo line of dialog in video games.

#outer worlds#felix millstone#i have yet to make an outer worlds side blog already.#i should probably just get on with that
56 notes
askfelixmillstone
Text

Has anyone ever thought about Adjutant Akande’s name? What does it mean? Is it like adjustable? Or agitates? Did they throw a dictionary in the air and pick a word from whatever page it landed open on? I don’t suppose she’ll ever tell me, so all I have are my theories

note: these are unpaid- just doing this for fun and practice

alright guys i’ve been having a really difficult time forcing myself to write, so this is my way of giving myself some gotdam accountability. if you want a fanfic written, either reply to this post/send me a message with

ill write them in the order i see them & tag the requester in the post! here are the fandoms i’m comfortable enough w the lore to write for

if you have a request that doesn’t involve these fandoms let me know directly and i’ll let you know if i can do it!

“I am also planning to leave a lot of things undone. Part of life’s mystery depends on future possibilities, and mystery is an elusive quality which evaporates when sampled frequently, to be followed by boredom. For example, catching various types of fish is on my list of good things to do, but I would be reluctant to rush into it, even if i had the time. I want no part of destroying fishing as a mysterious sport.” – Michael Collins

Outer Worlds Headcanons I have pt 1

DLC where we watch Max and Felix play tossball together when

There’s a surprising amount of dust in my eyes right now, considering I closed them when I tripped over that rock and went face down in the dirt

I’m over the whole tossball card thing, I’ll buy people replacement cards or whatever they want but I have moved on emotionally because I have Fantastic News!

I am gonna go try and get rid of this giddiness by shooting my way through the nearest Rapt den, definitely taking actual weapons this time though :’)

Red hair is beautiful! I think all hair colours are nice really, though I do slightly prefer brown hair in it’s various shades. But yes, red hair is awesome and I think people with red hair look really nice!

repurposed my fallout 3 dude for the outer worlds, here’s He so far 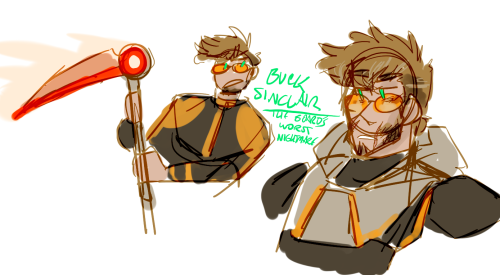 Did you know, the best way to escape any human enemy in Halcyon is to point behind them and yell “LOOK, A DISTRACTION!” then run away when they turn to look! This is a great strategy for if you run out of ammo or are injured and need to escape to safety! This helpful tip brought to you by Felix Facts! Written and presented by me, Felix “Kickass” Millstone!!

LET’S CHANGE THE SUBJECT!! Has anyone else noticed that when Max gets really mad and in your face yelling that his eyes pop and his nose flares so wide you think he’s going to inhale you? Just something I noticed when he was yelling at me for “reckless behaviour” a couple days ago

Next time I say I’m beating any monster to death with my bare hands I want someone to throw a gun at me and glue it to my hand so I have to take it. I won against the Mantiqueen, but I have many regrets. So many :’)

“To some this may look like a sunset. But it’s a new dawn.” – Chris Hadfield