the untamed as makeupaguy tweets (pt 2/?)

waking up in the middle night and not finding you

Ouyang Zizhen, to Jin Ling: you are my soulmate. The sun to my moon. The day to my night. I could not live without you. You complete me, a Ling. I love you.

Lan Jingyi, to Lan Sizhui: You’re the yee to my haw.

I’m working on an illustration for the second chapter ‘Beneath the Moon, Before the Steps’. Who do we have here… 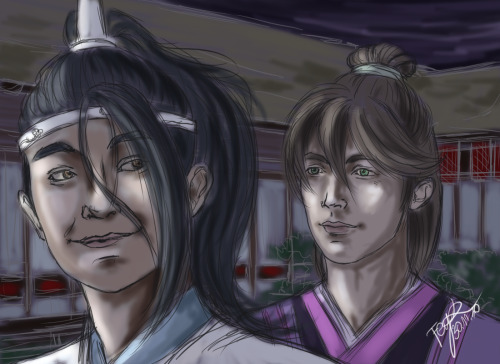 lsz : senior wei, are you alright?

jl: uncle told me that he used to do that all the time with my mother

Modern jin ling is an edgelord, jingyi is a memelord, zizhen is the cinnamon roll plant boi, and sizhui is the tired mom friend™

obsessed with wen ning taking the juniors out on a night hunts and becoming the strange, sweet uncle to all of them!! and yes i’m including ouyang zizhen 😤. somehow he’s always there to protect them, or brings things he’s grown or gifts he made.

it goes from just sizhui calling him uncle to all of them, even jin ling (who only ever does it sometimes, much like with wwx).

and wen ning slowly starts to tell them about e wen clan (the better, non horrible parts), like his sister and the people of the burial mounds.

just. give wen ning a family.

junior quartet reacting to you running and jumping into their arms

Ouyang Zizhen: So, why do you hate a Ling so much?

Lan Jingyi: What? Jin Ling and I are friends!

So I was thinking about a Harry Potter + Juniors au and in wich house they’ll probably be in:

Zizhen in Hufflepuff obviously or maybe Ravenclaw (bcus I hc him as a secret genius like NHS kind of, you know?).

Sizhui as either a Ravenclaw or Gryffindor (I think G goes well with his personality and sect color lol, but I lowkey think he goes better in R, since, y’know, he’s the only one with/with most brain cells, well at least more than one).

Ling I really wanted to pur him in Hufflepuff, because in the bottom he’s super soft and caring 🥺, obviously not because of his sect colours, what makes you think that? But I think he goes better with Gryffindor, or maybe even with Slytherin.

So… when I got to Jingyi I was like “Yes my boy is definitely a Gryffindor *realization* Oh my boy’s a G” and honestly(? it doesn’t surprise me at all, his personality is totally of a Gryffindor (or at least that’s what I think) or a Ravenclaw as well, mostly because of colours although he got some R trades, but no, yeah he’s an absolute G. And then I started thinking “What if Jingyi is like, the first Lan that isn’t a Ravenclaw?” God I love that idea idkw, not for nothing he’s the Lan most un-lan ever.

Now watch me do 〔write〕 the HC for this au, but tomorrow (or other day if I’m not to lazy) cus rn I’m tired 😗✌️

Slowly opening his eyes, the sunlight sneaking between the curtains, rolled a bit on the bed getting tangled up in the sheets and then he stretched. Jiang Cheng took a deep breath and then he finally got up, lazily making his way to the kitchen from where a delicious sweet smell came from, he put his hands around his boyfriend waist and stick to his body, still feeling sleepy

—Good Morning— Wanyin greeted after a yawn escaped from his mouth

It wasn’t until Lan Zhan finished the pancakes that Wanyin finally started to move but refusing to release him from his embrace. Once he settled the table, Wangji mildly removed his boyfriend’s hands and guided him to sit in his chair before going to his.

They eat in silence, the Lan out of an old habit and the Jiang still trying to not fall asleep. After the breakfast ended, Wanyin felt more energized, his intense coffee made his job, he definitely wasn’t a morning person but today he was way tired than usual. Yesterday he made his brother a favor and took care of A-Yuan while Wuxian made a quick trip for the day due to his job. It wouldn’t have been a problem since the kid, unlike his father, knew how to behave, the problem was when his brother-in-law asked him to take care of the living tornado he had as a son, Lan Jingyi, since he was coming home late from the hospital and the babysitter wasn’t able to go. He loved them so much, he really did, but sometimes it was so hard to accomplish the task of making the little Lan boy to stay calm, and even if the other looked calmer, he still got some things from his father and with a such energetic and chaotic kid as Lan Jingyi, well, lets say it wasn´t the best combination.

He was currently working from his place since his office was being remodeled and his boyfriend was working at the hospital with his brother, so he wasn’t home to help him with the kids, but it was fine, Jiang Cheng was an expert at doing various things at once, so he worked while taking care of the seven and six year olds, even tho he succeeded, he ended up dead, he had to stay up until like 2 a.m.  finishing his presentation for the next week meeting, both parents and his boyfriend arrived really late too.

And Green the Ground Below by @bromeliaddreams

Constellations Traced in Summer by @shadaras

(NB: the focus of this fic is on NHS & LWJ’s friendship, though Wangxian is a b-plot)

Friendship Famous in Story and Song by @theleakypen

I Think the Knife Helps by @zylaa

🍵 postcanon conversations with someone who understands

and you could be my enemy by @ilgaksu

✒ sometimes overtures of friendship are hard to believe

An Unlikely Friendship by westiec (me!)

☁️ Jiang Cheng and Lan Wangji come to an understanding

Jin Ling: This cookie is too sweet, and it’s not even fully baked. If I have to rate this, I would give it three points-

Ouyang Zizhen: I made it myself.

Jin Ling: -out of three points. 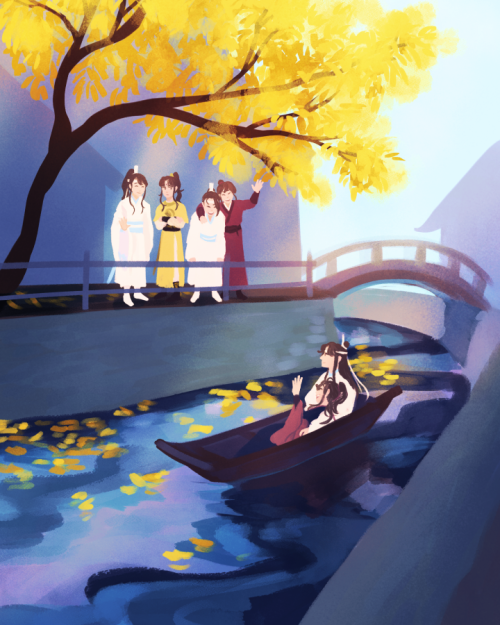 Random fic idea. Might do something with it, might not. This is actually mostly canon save for The Juniors being about 21 here. Due to some Demonic fuckery, Jin Ling, Ouyang Zizhen, Lan Jingyi and Lan Sizhui are all lost in the Gongzhi (not a real place) Mountains. Everyone is injured, starving and Lan Sizhui is in particularly bad shape forcing Ouyang, the most mobile to go find help in the rumored Siyi Temple (10 Points for anyone who gets that reference) to find Gong Er, a woman called The Reckless Abbess. Slight Blood warning.

The Ouyang Sect tried to stifle the rumors surrounding the Gongzhi Mountains for decades. Shrouded in fog and choked by thin air, it’s deep valleys hide a dark and cherished secret. It is said that centuries ago, the courtesan of a cruel emperor chose death over freedom, broke out of her wedding palanquin and started running. Braving arrows, dogs, and soldiers, she ran until her feet bled. When she reached the outside of the city, mortally wounded, she didn’t stop. Running into the mountains, through rivers and climbing into trees. They say you can still see her trail of blood weaving through the woods and splattered on the trees. As Ouyang Zizhen climbs his way through the valley, he knows that story is not entirely true.

The overgrown road is lightly packed with red clay. The leaves of trees lining it are all red, particularly uncommon in a mountain range known for its evergreens. The road is long, winding and marked with red hand prints on the trees. If you don’t pay attention, you’ll be hopelessly lost. Wounded and ruined with worry, Zizhen presses on, pain gnawing at his side. He shouldn’t have laughed at Lan Sizhui when he offered to bring herbs for minor injuries. It was supposed to be a routine trip, kids don’t need salve for every cut and scrape they get. Now he’s covered in bruises and bleeding through makeshift bandages. If he doesn’t keep going Lan Sizhen will die and the others have no way of getting back home unless someone finds them somewhere in that random shack with nothing but two canteens of water between them. Even as he stumbles face first into the dirt, he presses on fueled by desperation.

If the Lan Sect is about temperance, and the Jin Sect about decorum then the Ouyang Sect is all about resilience. He will prevail. Even against his own weakness. Sorrow is only something to be defeated. Exhaustion will be conquered. The fog gets thicker but the red handprints on the trees beckon him closer and closer. Until suddenly the trees stop. Instead of the massive wooden gate he’s heard so much about, he’s greeted with a wall. High and wide. No way to climb over, peppered with red hand prints.

There’s supposed to be a temple here! The Siyi Temple should be here! Confusion, dismay and rage tears at his wounds. All of it mixes into inky despair that wrenches a cry from his broken chest.

“No!” His voice breaks against the trees sending birds flying. “No, no no!” He pounds the stone with his fists. This is defeat. Jin Ling believed in him for nothing. His friends - his brothers beyond blood - are all going to die. There has to be someone here. This can’t have all been for nothing! “Someone!” His ragged voice echoes with no response. “Someone, anyone please help! My friends…! There’re all…!” He can’t breathe. The thin air never bothered him before but that fall from earlier must’ve shifted one of his broken ribs. “Please…!” He can’t shout anymore and his shaking legs finally give out. He rests his head against the stone wall, gasping for air. He clutches his chest. He has to get up! He has to keep going! Weakness is only something to be conquered. With one last shout, he forces himself back to his feet.

The world tilts. Suddenly he’s staring up at the red leaves above him. The shift and sway in the cold winds. The rustling sounds like Jingyi’s wheezy laughter. He won’t hear it again. He has no strength left, he can’t even roll over. Tears could his vision as a shadow passes over him. He mutters a prayer for his friend’s soon departed souls and darkness consumes him.

For a moment, all he knows is darkness and the feeling of floating. There’s no pain or failure. There’s nothing but the void. He supposes this is what he deserves; failures don’t deserve rewards in the afterlife. Only those who’ve achieved great things achieve enlightenment. What has he accomplished other than breaking Ouyang Zheng’s drinking record? When he’s reincarnated, he will dedicate his life to finding his old friends - whatever form they take - and begging their forgiveness. He lets the darkness consume him pulling him deeper and deeper.

Then he wakes up.

#He's fine., #Well...not really fine he's starving and badly injured., #but he'll get better!, #Lan Sizhui, #Lan Jingyi, #ouyang zizhen, #Jin Ling, #OC, #she's not seen here though., #She is in the scene., #she can hear him shouting but you never see her., #the untamed, #the juniors, #Jin Ling's arm and ankle are busted, #Lan Jingyi's sight and hearing have been affected and his balance has suffered as a result., #Lan Sizhui is broken. Like he's been FUCKED UP.
2 notes · See All
tangledinmdzsText