Parker: Do you guys wanna see a butterfly?

Parker: *yeets the butter across the room*

TBH, I miss the Yellow trend on TikTok so I’m doing it here with Peter (also I only have like 4 fluffy fics with him)I’m also writing this without my glasses because I lost them (My new ones are coming in tomorrow/today/the 25th)

Peter scrolled though TikTok, liking the ones he liked the most. Laughing at the ones he found funny. Rolling his eyes at the ones he hates. Most of his FYP was filled with people showing off what they loved with the Coldplay song Yellow. He smiled as he watched people show things off. He looked over at Y/N having a conversation with Natasha and smiled. They made him be at his happiest and be the most comfortable with himself.

Clicking the sound, Peter clicked to use it and filmed a little bit before turning the camera over to Y/N. “Y/N.”

They looked over and smiled while laughing, “What’re you doing Peter?”

“I don’t think it’s nothing, but alright.” He laughed at them before looking back at his phone, watching the video play out. He added the the CC in the corner and that this was his yellow. After posting it, he went back t his FYP and began scrolling through it again.

Peter sat on the top of a rooftop. Crime was slow today so he didn’t have much to do. He felt his phone go off and saw a text from Y/N.  It was something they posted as their face was on it. Opening the link he smiled softly as he heard the song. And when it ended, almost immediately after even, Y/N called him and he answered. “I saw your post so I had to do one of my own.”

“Sitting on a rooftop, no ones doing anything crime-related today so I might just head home early. You?”

“Sitting in bed while Star Wars plays in the back.”

“Always is.” He heard someone saying their name in the background, “I gotta go, mom’s calling for me. I love you.”

“I love you too.” They ended the call and he smiled. God he loved them.

so uh I’m reading grishaverse now. I started with Six of Crows (impulse buy). I didn’t actually know it was a heist book. It was a “uh heard it was good, might as well” blind buy. Now I’m halfway through Crooked Kingdom and I’m having a great time. Naturally, I was going to do what I do with literally EVERY story with a group dynamic: assign leverage archetypes.

So my Leverage fans- I’m going to suggest you stop reading this post and go read Six of Crows and come back when you do. Because I already know you love crime.

Now, dear fellow readers, if you don’t know Leverage, rectify that immediately. Its the best. But what you need to know to enjoy the rest of this fine post is that its a robin hood story. A group of thieves team up for a job for this seemingly decent guy, get screwed over (no pay and attempted murder- yay!), plan a complex revenge job (sound familiar?), then they team up together and like help people.

Anyway, there are five members of the Leverage crew: hitter, hacker, grifter, thief, mastermind. Leverage leans heavily into the roles of each crew member. I really like that about Leverage.

I like to assign the jobs to non-leverage characters in other media because: Its fun! Usually, it doesn’t work out perfectly. But like I said, fun. I also usually keep it to my head but uh. Its literally a heist book! I want it to match up perfectly and if you notice there 6 crows and 5 crew archetypes. But I figured I would try, so here you go.

Six of Crows as Leverage Roles

We’ll start with Mastermind because they’re the leader.

The mastermind is the planner. They can do a bit of everything, but their main job is putting the crew together and solving the puzzle that is the job. Usually a bit of an egomaniac, but like they really ARE that smart, that’s the point, so…

“you all know what you can do, I know what all you can do. That gives me edge, gives me the plan”  -Nate Ford, Leverage

Which is Kaz Brekker. Obviously. I’m not going to explain why. Next question.

Hitter is just like it sounds. They hit people. A hitter is a bruiser. Gunner. Fighter. Sniper. Etc. They are on the team because of their ability to fight. They can do other stuff sometimes. The hitter on Leverage knows about food and wine for example and is a decent conman. But if there is a fight, your hitter is in the middle of it. That’s their job.

“You want my job? I get punched and kicked!” -Eliot Spencer, Leverage

This was the hardest to place for me because honestly all 6 of them are good in a fight. But who is there exclusively to bust heads? I’m gonna go with Jesper. Jesper is my hitter because he’s a gunslinger type. He’s there to fight. That’s what he wants and arguably that’s why Kaz brings him along. So, anyway I’m going with Jesper.

Hacker is well…. They hack. But their role is more than typing in the computer. They are your all around tech guy. Information gatherer. Inventor type. Sometime forger. Tinkerer. Basically, the smartest guy in the room other than the mastermind. Arguably smarter, but in a different way.

I thought this one would be hard, but it was surprisingly easy to place. I thought Inej for like half a second (info gathering), but I quickly realized it was Wylan. Wylan is a smart inventor sort. Out of the box thinker. (I said I wasn’t using relationships for the placement- just skills and personalities, but uh the dynamic between a hitter and hacker is ALWAYS top tier and it continues here, I’m going to just say.) Wylan is the hacker. Moving on.

Your grifter is your conman, or con-woman as the case may be. Seductress, gain your trust type. The roper. The girl in the pretty dress sitting on your lap being a bit too flirty. The man in the nice suit offering you an opportunity too good to be true.

“If I’m doing my job right, the mark just… turns off the alarm for me.” -Sophie Deveraux, Leverage

So, we have three characters left- Inej, Matthias, and Nina. Anyway, its Nina. Look at all of them (even the ones we already placed). She’s the only one that does this sort of charm-the-mark routine. She’s the heart. She speaks multiple languages like a native. Knows a lot about different cultures. She can be a spy. Nina is the grifter, trust me.

So everyone here is a thief. What they mean by thief is more cat burglar. This is the character that crawls in the airducts and does gymnastics over some lasers. The one that sees a skylight as a good entrance. Sneaks into the vault and cleans is out with no one the wiser that they were even in the building. Classic thief.

“Quick and light. That’s how I survive. You slow me down, you kill me.” -Parker, Leverage

I know. Again. They’re all thieves. But our thief in this context is Inej. Get in to hard to reach places. My girl Inej. Obviously. Inej. An amazing thief. Next.

Okay so we are out of roles. We got one crow left. Matthias. Looking back over everyone and Matthias could maybe work as hitter. Hitters are often ex-military. He can fight. But I’m not doubling up. Besides, let’s remember the mastermind hires everyone. So its best to look at why they’re there. Why is Matthias there? Not to be a hitter, or a grifter, or a thief, or hacker.

Matthias is the ringer.

Now, Leverage doesn’t spend nearly as much time on a ringers because they don’t recur. You are only a ringer for the one job. Ringers are not always necessary if your crew can do a good enough job of casing. But a ringer is critical if, like the Ice Court crew, you are robbing a place you can’t possibly case properly. You need a ringer, an inside man, whatever you want to call it, to share enough intel to help you. That’s Matthias.

Now we still have problem because I do want to match everyone up to a character which brings me to my amazing revelation. For which we need to watch The Second David Job- the season one finale of Leverage.

The Second David Job is great because its one of the few jobs that’s more of a heist than a con which is great for our purposes. It also has Maggie. Maggie is one of the characters ex-wives. Works for the museum they intend to rob. She likes them, but they’re criminals and she likes the people she works with, too. However, she gets some information and starts to realize things aren’t so black and white. Also that the people they are stealing from are murderous pieces of shit so. She helps the team. But she still retains a sort of moral stance. Which interesting. And similar to Matthias. She ends up recurring as a character if not a ringer everytime. They even rescue her from jail, so like, yeah.

Anyway, my fellow Leverage friends will understand why this is hysterical to me but Matthias is Maggie and I’m dying about it tbh.   Like he’s Maggie. Maggie.

“you can’t just make people do what you want them to do!” -Maggie Collins, Leverage

Anyway, I had a great time sharing this. I have a lot more reading to do before I’ll feel comfortable hanging out on the grishaverse tag, but until then. Bye for now.

Go watch Leverage. Its on IMDb. You’ll love it. Read Six of Crows. Its awesome.

Well, after a long string of very strong episodes, I felt as if the D. B Cooper Job gel a bit flat. Like, it was a good episode, but I had every “twist” pegged. Pretty predictable. BUT, it was still an enjoyable, good quality, episode. Just don’t try and figure out the twists because it’s predictable.

I just realized that I hadn’t done this, so

im back. could someone please explain why im not allowed to go on the instagram

TRANSPARENT OF PARKER FROM COMBO CREW CUZ I DIDNT SEE ANY 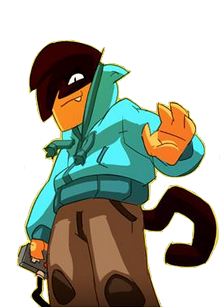 Our lead is amazing.

#it’s about the celebration of fictional characters birthdays#happy birthday dean winchester!!!#I want hardison hacking to look up eliots birthday and tricking him into thinking he’s gonna do something huge but really they do something#small and intimate and eliot is soft for it#give me parker not knowing her own birthday so she chooses her own and they love her and her birthday#leverage ot3#eliot spencer#alec hardison#parker#leverage#parker x hardison x eliot#meta in the tags#nate ford#sophie deveraux#shitposts#leverage shitposts#mine#headcanons in the tags#making that a tag too
69 notes
taylorry
Answer

is this an insult or a compliment

Sophie: As your favorite teammate, I think–

Sophie: As your least annoying teammate–

Sophie: As your most beautiful teammate…

Sophie: I dare you to finish that sentence, Nate. I dare you.

Nate: If it’s any consolation, you’re the one that scares me the most.