So now that we’ve gotten the full details of the virus hack Watts put in Penny iterated to us a few times, and thus narratively ‘set up’, I think we can actually get a pretty good idea as to how this will play out:

Despite Team RWBY and co.’s efforts, Penny will fully succumb to the virus. She will go to the academy. She will descend to the vault, likely accompanied by Watts and/or Ironwood. She will raise her hand to open the Vault…

…and nothing will happen.

Because as we’ve seen multiple times, Hacked!Penny cannot use the Maiden Powers. Subverting her free will seals the powers away, and the Vault will not recognize Hacked!Penny as the Winter Maiden.

This is where we’ll get Watts’ true villainous breakdown, and possibly one for Ironwood too. Because for all of his supposed genius, there has always been one thing that was simply inconceivable to Watts: That Penny is a person and cannot truly be controlled through her mechanical body, and by extension neither can the Maiden Powers. And for Ironwood, all of his precious ‘control’ fizzles out into nothing. Because at the end of the day, he can’t actually force Penny to open the vault. She is not under his control. It provides the most fitting conclusion to Watts’ villain roll and further sets up Ironwood’s downfall.

Oh, and then maybe Ruby drops in, shoots Watts in the face and kicks Jimmy’s ass for all the shit they put her maybe-girlfriend though. Maybe Weiss joins in too. Don’t really really have any evidence for that one, I just think it’d be awesome.

Looking back at Ruby’s silver eye memory montages from v6 and like, why are the memories with Penny the only ones with a significant amount of added blush in the redrawn screencaps, crwby explain yourselves

(ik there are a couple others with added blush, but they pale in comparison)

Ruby proposes a plan that poses great risk to her to protect Penny, only for Penny to reject it outright, obviously fearing the loss of her friend. After some shouting and crying, Ruby shouts “Why can’t you just let me do this for you, Pyrrha!” and catches herself immediately after, everyone realizing she has some repressed-emotional problems (barring the possibility of Ren seeing thru her immediately).

honestly it would have been better writing if penny and weiss already knew each other. it would show how influential her family is and it would also explain some of the conflicts between Ruby and Weiss. Weiss being used to her other socially awkward friend differing to her do to there gap in social and life experience and penny’s trusting nature

Penny stepped a little closer to Ruby.  The corridor was dark, save for a subtle red light at the far end.  It had been Yang’s idea to visit the haunted house, but now she and the rest of their friends were – naturally - nowhere to be seen.

When Penny bumped into Ruby, they both shrieked.

“What was that!?” Ruby yelled.

“It was me.  Sorry…”  Penny replied sheepishly, though she still scanned the hallway ahead for any spooky threats.  “Can I hold your hand?  I’m scared.”

Ruby instantly reached out to find Penny’s hand in the dark, fumbling slightly, but then holding it tight.

“Ready?  Let’s get out of here.  Let’s just walk as fast as we can and leave all this scary stuff behind,” Ruby suggested.

“And then we can go get milkshakes?”

Even in the dim light, Penny could see Ruby smile.  “And then we can definitely go get milkshakes.”

Hand in hand, the pair walked as fast as possible down the hallway and toward the red light that signaled the end of the haunted house and the start of their freedom.

They both expected something to jump out at them.  Penny’s hand squeezed Ruby’s tighter in anticipation for the scare.

It came in the form of a prop Grimm that swung out from a doorway and barred their path.  After the initial shock of its appearance, Ruby and Penny laughed.

“Please, we deal with Grimm all the time.”

Before Penny could reply and offer some quip about how they’d been worked up for nothing, even after the far spookier frights they’d faced earlier in the haunted house, another jumpscare appeared, dropping down from above.  The faux Grimm’s claws scratched at their heads and the beast let out a terrifyingly realistic hiss.

“Okay, that’s enough of this,” Ruby cried.  She wrapped her arms around Penny from behind, and then activated her semblance.  In a swoosh of rose petals, they sped through the remaining scares without them even activating, and the actors could only wonder what that weird red flash was.

Past the exit, Ruby and Penny returned to their more corporeal states, but Ruby still held onto Penny from behind as they caught their breath.

“Are you alright?” Penny asked.

She nodded.  “I don’t think I like haunted houses very much, though.”

Ruby laughed, then shifted around so that she could hold Penny from the front.  “We’ll avoid them from here on out, okay?”

“I would like that.” Penny buried her face into Ruby’s shoulder; despite her stature, Penny was suddenly very small from the fear she’d felt inside, and she was desperate for comfort.

After a little bit, Ruby suggested, “Milkshakes?”  But she still held Penny tight.

“You got it.  You know I always like hug time.”

Two weeks later and still in awe how much Nuts and Dolts content this volume has provided. I am once again asking if we’re doing this because it seriously feels like it’s got a chance. So many parallels and intimate moments…

remember when they were happy like this? yeah yeah good times lkjdsfsdj

You may support the artist via commission (at 30% off!) or Ko-fi donations! Link to Tumblr post here. 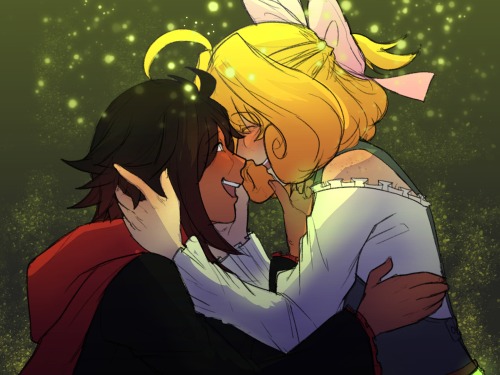 #penny polendina#ruby rose#nuts and dolts#mechanical rose#rwby#i just had he strong need to draw V1 dolts#i love Penny 1.0's design ngl#it's just so innocent and classy at the same time#this is what i doodled to pass time while waiting or the new ep
418 notes
nov4-rocket5
Text

Penny? Where ever you and your friends are I need you to listen.

I spent all of Atlas’ money on this oufit and now I’m broke. Be a real one and hand over the winter maiden and some bands or I will blow up Mantle with my drip bomb.

You have an hour to respond.

Okay, so since Team JNPR 2.0 will likely be going down to Mantle to hide Penny, you know that Emerald is going to be stuck going with Team RWBY, namely Ruby herself, on Operation: Tin Smelter…

…most likely with Emerald disguised as Penny.

That is going to be awkward.

I know the speculation about Emerald using her semblance to disguise Ruby as Penny to complete the ultimatum has a lot of dolts fans discouraged, because it would keep the two of them separate for the rest of the volume, but it’s just gotten me back on my bullshit of thinking up scenes that will absolutely never happen:

After they’ve all discussed and agreed on the plan, Ruby goes down to Nora and Penny’s room to check on the still unconscious Penny before leaving, and on her way out just gives her a little kiss on the forehead or something (and we all lose our minds) Then of course it cuts to Nora watching from the bed with the most smug ‘I knew it’ look on her face

Something something It’s Not Easy Being Green

Would anyone like a bad thought cuz I have one-

What if Penny decides that the only way to keep Ironwood from fully controlling her and the maiden power is to get Ruby to kill her or kill herself in order to give her the powers.

I DONT WANT IT TO HAPPEN BUT ITS PLAUSIBLE

I’m literally begging all I want is a flashback to the whole penny project and the paladin incident , I need to know what was going on there. I also have the suspension that perhaps Pietro and Arthur are going to be face to face at some point.

One amazing thing from this week’s RWBY was the “resolution” of the Penny hook from the earlier episode. I was worried that in all the chaos and confusion of the Hound’s attack, she’d just picked herself up and kept walking, and that we’d follow Ruby and the others as they tried forming human chains and tripping her and doing whatever else they could to slow down a super-strong robo-girl on autopilot…

They just took the sleeping beauty upstairs, set her down, and put Nora on bow-booping duty.

Everyone imagining a really dramatic Renora reunion for next weekend, but it would be hysterical if Ren declared his undying love for Nora and she was just like “sorry, Ren, I’ve got a magical robot girlfriend now.”

big reason why i really love the maiden: there’s no way for them to hide their feelings (try as some of them might) because their powers betray them.

wind picks up and there’s a cyclone? shit’s about to go down, and not the fun kind. crwby wants you to feel something and dammit you’re about to feel.