what fuckin HIGH ASS STANDARDS do y’all have where she isn’t the most gorgeous woman you’ve ever seen??

nothing hurts me more than knowing that s9 will be the last season of peraltiago. anyways enjoy thinking of them slowdancing to ‘fade into you’ in the middle of the precinct when everyones gone and its just them

I need a time turner. 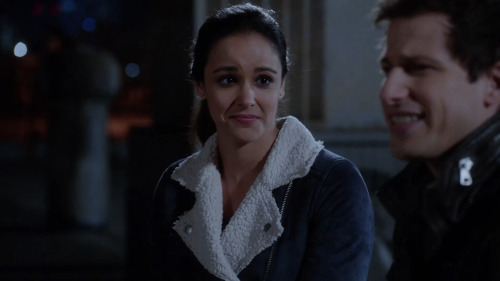 #he is SO LOUD

Summary: Jake and Amy spend their date night staking out a nightclub in Brooklyn. It’s safe to say that it doesn’t go exactly as planned.

Pink, blue, green, yellow, purple. Every color imaginable cuts through the dark venue like a knife, quick strokes of light appearing only to disappear just as fast, to the beat of loud techno music that definitely doesn’t strike a chord with the two young detectives, Jake Peralta and Amy Santiago.

See, they’re not exactly here to party - there are so many other places, places that aren’t Club Enzo, they’d much rather pay a visit on a Friday night - but rather to work. They’re here to stake out the location and hopefully gather evidence that can put their perp, Axel Manson, in jail for handling and dealing a new drug called ‘Kandy’ - yes, with a ‘k’. Very creative.

It isn’t exactly the date night they’d planned but Holt really needed their help and at least they’re spending time together - plus, there was no way Amy would ever deny their captain her help. The second the captain’s name flashed up on her phone screen, Jake knew date night was about to take a turn. 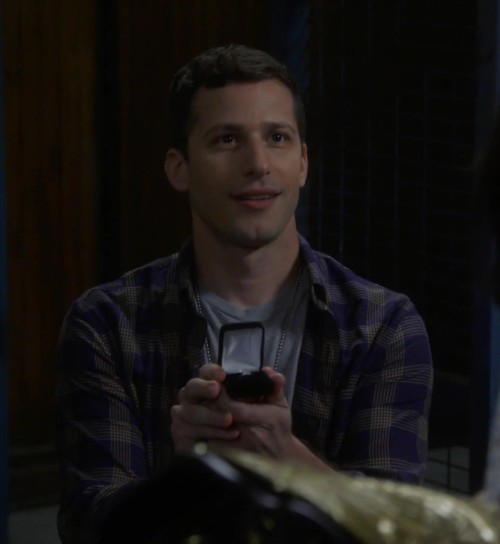 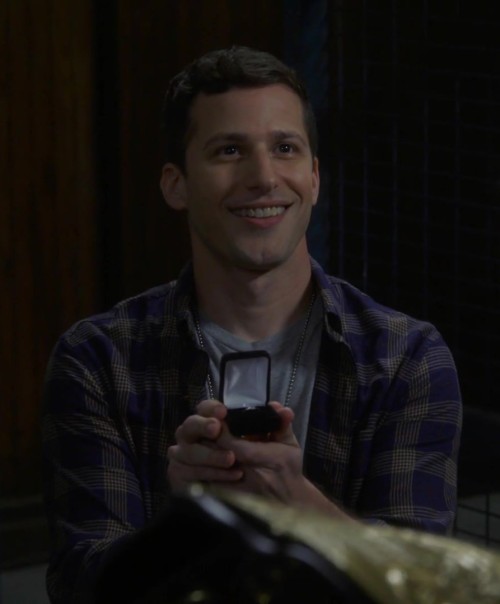 Jake: why are you smiling?

Rosa: what, am I not allowed to just be happy?

Gina: *walking past* Charles tripped and fell in the parking lot

Rosa: *trying not to laugh*

(they were meant to say interrupted)

He’s at Charles house as he’s closer to theirs than any other family/friends, During their Jake gets a call from Charles saying Mac is a bit unsettled, Charles says they can handle him & Amy tells Jake to say that if he’s still unsettled by the end of their meal they’ll come and collect him. Both Charles and Genevieve try their best to calm him by singing songs, distracting him and putting some baby tv shows on but none of that works.

Charles feels bad that Jake & Amy’s night will be ruined as Jake phones again informing him that they are leaving. Mac is still crying at this point which Jake can obviously hear so they decide it’s best for him to go home.

Jake collects Mac from Charles’ whilst Amy sits in the car, Mac still cried for the journey home and a bit whilst they are in the apartment. Amy sits him on her lap and manages to soothe him.

To get Mac into routine of staying over at someone’s house over night, Jake and Amy will stay until Mac goes to sleep or he is distracted and over time Mac grow out of that phase and is happy to go to someone’s house especially Charles’ as he gets to play with Nikolaj!

He’s just a few months off being two when Amy finds out she’s pregnant again, they don’t really tell Mac until the others know & he’s still a little bit confused on what is actually going on

After his 2nd birthday Jake and Amy find out they are having a baby girl, Mac is very excited over the thought of having a sister and that is all he tells his friends and teachers at daycare.

Amy’s hours are reduced and she’s back on desk duty meaning she’s off for a few days now, Mac sort of becomes a bit clingy to her and will follow her around even if Jake tries to distract them

This obviously puts Jake and Amy in worry mode thinking he’ll be like that when the baby arrives.

Jake buys a baby doll for Mac which can fit into some of his clothes he had when he was a baby, Mac warms up to this little doll and takes it everywhere he goes.

Once their daughter arrives, Mac is reluctant at first but quickly gets used to her being around as quite easy going which benefits Jake and Amy so so much

Amy: why are you thanking me? I insulted you

Jake: all I heard was “you’re pretty”

Cassian and Nesta, and Jake peralta and Amy Santiago give off the same energy both individually and as a couple

No I will not elaborate

ships that act coupley and married while they’re together ★★☆☆☆