I made a new group chat feel free to join!!

Welcome to the group be sure to read Description! Support group against cyberbullying and abuse etc. There are times in this day and age where support is deeply needed, Talk about your favorite topics and most of all is A safe space to vent and find emotional support and meet new people. If someone chooses to make hurtful comments or is generally nasty to one another you will immediately be removed from group and blacklisted/blocked. A beware post will be made by me personally. Cyberbullying is never okay and can leave a long lasting scar to individuals and ruin future relationships and break trust. I am no longer going to stand by and watch people get hurt especially online, based off differences and lies. Other than that Have fun. All is welcome.

Ishmael: When I said, “bring me back something from the beach,” I meant like a seashell.

Queequeg, struggling to hold a seagull: well you didn’t fucking say that

They both are giving me life, but gonna be the death of me too<3

#ask#anon ask#thanks for asking#BUT HEY I CAN'T CHOOSE.#MAYBE THEY SWITCH PLACE IN THE 1ST PLACE AND THE 2ND PLACE OCCASIONALLY BUT– both is good.#if you let me decide from the fandom... hm.. both fandom are kinda... not.. lively. so the fandom only giving minus point :)#not lively as in : not interacting with the content that others' made. that's very unfortunate...#*looking at both fandom*#pfft as if they read this#usually they just scroll pass me. mostly. not everyone. just mostly.#I am so unpopular if you can't tell already anon.#:)#sorry I lash it out on you. you only ask one thing but I'm telling you this rant instead *bow in sorry*
5 notes
izukuslittlecockslave
Text

you’re telling me that the whole episode was about whether or not a verbally abused woman is guilty of murdering her husband and carisi managed to read between the lines of the case on stand to make her not sound like a cold-blooded killer but benson can’t do the same? besides, after all they’ve told the jury, the fact that this woman didn’t feel remorse over killing her abusive husband (less than 5 hours after it happened) should not change anything?! what sort of jury suddenly thinks she’s not a victim anymore??

#i'm sorry but at least half of the victims of abuse don't feel sad when they're abuser is finally gone#not within such a short time frame anyways#and what we're just meant to believe stone was totally losing that case until this one fact is revealed and boom the poor woman is in jail?!#nah sorry not buying it#law and order svu#sorry i've spent 3 weeks watching all the old seasons and i come back to this?? pfft m'kay#s20 is clearly only worth watching for jacob pitts and sonny sorry not sorry
2 notes
jann-the-bean
Answer

I’m excited too, I’m also using some (similar) scenes that kotika used in her quick sketch and maybe strawberry nightmare will be mentioned in the story as well :3

Also I hope you’re able to get better rest today/tonight?

#ask#help i’m a gay fish#sorry just i forget everyone’s time zones#but I know it’s not too late for me#but it probably would be for you if you’re still up#poor nighty#he’ll never escape strawberry nightmare XD#wait.. omg what would night’s reaction be if someone like genuinely loved strawberry nightmare#like full on they try to dress like them and act like him#pfft#I feel like nm would be so appalled#but if the fan is a child he can’t really be rude to them#so he all like ‘awesomme I’m glad you like it.. him.. yeah... keep being.. awesome little dude’#like I feel he wanted to contact his representatives and be all like ‘are you sure we can’t delete that abomination from the internet?’
6 notes
yi-dashi
Text

#team huddles with fran!!#fran's off the wall#PFFT I'm sorry I'm never gonna let him live that down now#remember your humble beginnings folks 😂#but anyway yeah maki is a hard dom I do not take criticism#maybe she could be nicer?? but she's def the kinda person who will not take shit
8 notes
racecrack-higgins
Text

who would win in a fight between jack and juck.

Fighting at a New Year’s Eve party was not on Sasuke’s list of things to do. Then again coming to a party like this wasn’t on high on his list either. All the blame falls on Naruto and his incessant begging and those fucking unfair blue eyes. It’s fair that he gets the blame for this too right?

#ramenthings#answered#a hand touch is the equal to a kiss in sasuke's book so it counts! pfft lamo#lmao*#i honestly don't know what verse this is but it was fun to write#sorry for no kiss but sasuke just wasn't budging bc naruto is scary that way =p#don't tell him tho can't have him knowing that ;D#pls excuse the grammar i was being called away
3 notes
mythsofmodern
Text

Okay I thought I’m chill now, but nope. So CAOS spoilers ahead.

THE AUDACITY!!! Of them recreating of that Harvey and Sabrina scene from the first episode with Nick and Sabrina?! THE AUDACITY OF TAKING THEIR MOMENT AND TURNING IT INTO ANOTHER SHIPS MOMENT?! GET THE HELL OUT!

#( i have no self control // ooc. )#yeah i am still mad and i am sorry but like the heck?! give them their original moment and don't steal it from another ship pfft PFFT!!
1 notes
buruuhan
Photo

I’ve only seen few clips of Zane acting like a detective and uhh after I saw that art I said in the WIP, an image of him as an okappiki popped into my mind (particularly Zenigata Heiji, a fictional Edo Period detective who arrests criminals by throwing coins)

Bonus: PIXAL as Hachigorou/Garappachi (Heiji’s sidekick) soon after she got the same jutte as above in her hand 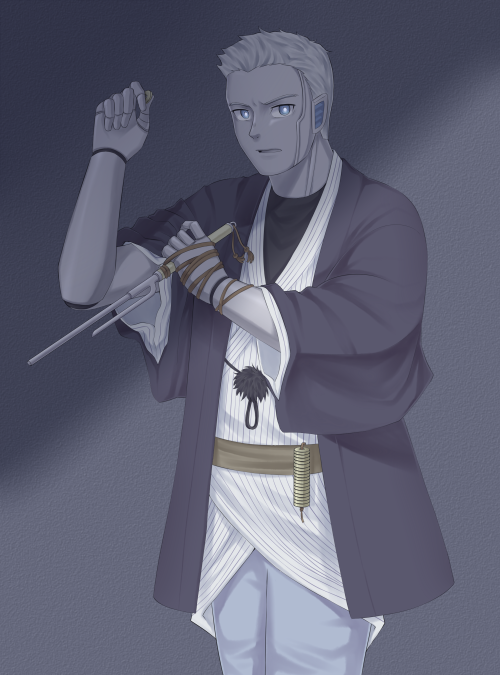 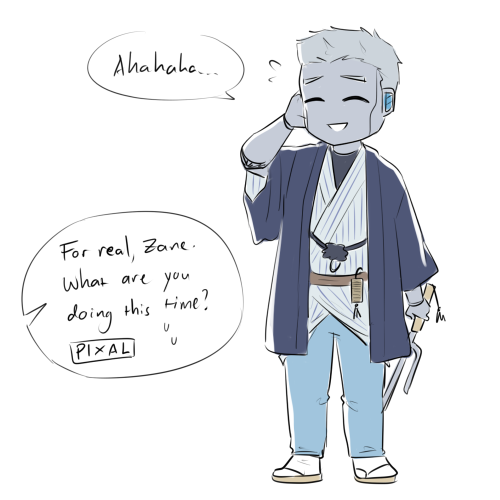 If anyone is ever wondered what all the code looks like after his system crashes in the Claptastic Voyage, it’s almost exactly what you would expect! Poor guy. He lost all his cat photos.

I do find it a bit concerning that he had 85.3TB of “unauthorized warez”..what the hell does that mean? And the first thing that starts is his dance routine, it initiates and cancels itself like three times. Lol.

He’s getting errors in Common sense, Tact filter, Smooth talk, and Visual maintenance. And then his subroutines almost immediately start his crying subroutine. I checked the number for the time until his birthday, and it’s just amounts to a year, so it doesn’t really reveal anything special.

Man, I think I would die to see more of this, pfft.