Uncovered, untrue
A derelict pair
In search of the truth

And I was told about this torture, that it was the Hell of carnal sins when reasons give way to desire.

with you by my side,

I could conquer the world

and I just hope,

for the life of me,

that you never want

to let go of my hand

“I want to get you out of my head and get you into my bed..”

Mmmmmm, I could use a little of you covered in honey - eUë

Meeting you was like finding something I never knew was lost. There was an emptiness and my heart was always yearning, but for what, I never knew. Then I met you and discovered that it was you who held that missing part of my heart all along.

And now, I don’t know how to live without it.

‘She’ - James McInerney. Poet & Author of ‘Bloom’, ‘In between the lines’, ‘Red’, ‘The Pieces that Collide’ & ‘Everything I Write is About You’ OUT NOW on Amazon/Kindle. 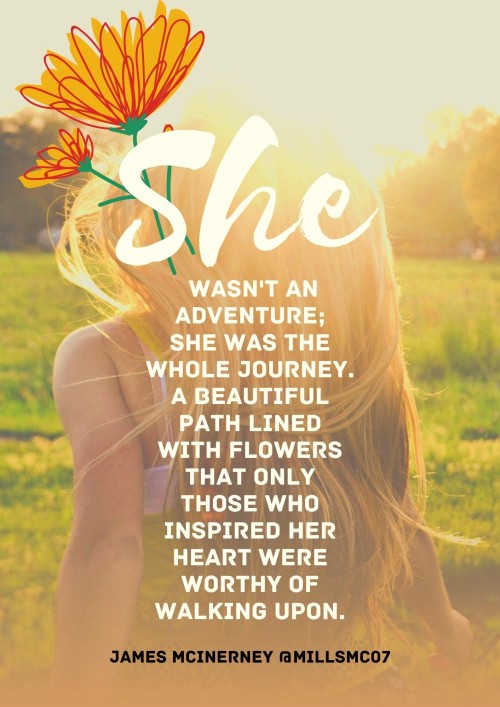 We had the stars, You and I. And this is given once only.

- André Aciman, Call me by your name.

Who can explain such things? How this world stretches over the horizon, teeming with life, can feel so cold, so lonely when one soul departs from another. In truth, I do wish we could have left together. For now my heart is torn, ripped, and I have no more to give this place, no more to offer. Without you, I’m left with nothing but words upon a page and an emptiness where you once rested. ~ B.T.

broken, crumbling, i’m grasping
at the edges to keep myself from
falling; hollow, haunting, left in
the dust, i’m trying to make sense
of how it was you who left me

there was a word
he held it tight
it guided him
through endless nights
was just a word
would set days free
but as they’d break
well, so would he

there was a word
it was his world
a tattered book
with pages curled
lost to the day
broken, disturbed
without his world
without a word

Over two decades I’ve been living in her mind

Afraid of a world outside that hates my kind

Afraid to be true to just be real

I sit alone in the darkness pretending I don’t feel

Another form walks about he takes control

Directs this minion and she does as she’s told

A phony a fake, they dance this masquerade

They put on a smile as they march their cis parade

But my form is too weak so I just succumb

To the darkness that surrounds me here inside this void

I have no shape, I have no face

I have no life I feel displaced

Dysphoric is the only state I know

Perhaps anger is the answere, angst is the key

I’ll take him down with rage and claim victory

His control will be broken and mine to take

Free of his vision, free from this mold

Or I’ll die trying it’s worth a shot

I cannot help but think of your sweet smile, and the ache that follows in the knowing I shall never see it again, the warm embrace you would always greet me with, I am now left without, the touch no longer felt, your shy smiles and soft voice has now left this world cold and lonely, your gentle heart and kindness felt no more but in dreams, my memories, and this place left far too hollow without you. ~ B.T.

I’ve tried
to become someone else for a while,
only to discover that he, too, was me.

“Look at you and your black self. What’s important to you should and will show up in the art you make” - #drmargaretburroughs to a 16-year old #averyryoung #blkhistorymonth #365blk