The rosary pea aka Abrus precatorius, also known as crab’s eye, jequirity bean, or jumbie bead, is a perennial climbing vine whose small pretty seeds are surprisingly deadly: they contain a toxic protein (called toxalbumins) called abrin that is so poisonous, a single seed can kill you within 36 hours. Actually, the entire plant is toxic, but the seeds especially so,which are known for being woven into bracelets and necklaces.

Someone who swallows a significant amount of abrin would develop vomiting and diarrhea that may become bloody. Severe dehydration may result, followed by low blood pressure. Other signs or symptoms may include hallucinations, seizures, and blood in the urine. Within several days, the person’s liver, spleen, and kidneys will stop working, and the person dies. However, the detoxified rosary peas exert stimulatory and strengthening actions on nerves. Because of this, it is used to treat paralysis and other similar conditions; However, it can be used as a sedative when used in high dosage.

This is the peyote cactus. Cute, isn’t it?

And, like all small, cute things, (I’m looking at you, short people) it’s also quite dangerous. It contains a chemical called mescaline, which causes hallucinations. It doesn’t sound like much, but it’s banned in USA for a reason, since there have been more than a few cases of homicidal, psychotic and suicidal tendencies, courtesy of good old peyote. It also causes dizziness, drooling, drowsiness, nausea, paranoia, anxiety, fear and emotional instability. It also increases heart rate, blood pressure and respiration rate, leading to its use as a stimulant. Despite being banned in USA, it is used by Native Americans.

Ricinus communis or castor oil plant, ( I know what you’re thinking- no nicknames? 😱) is infamous for its use in the attempted assasination of Bill Clinton, and the fact that it was considered as a biochemical weapon in World War 1 (the idea was dropped due to over sensitivity and no known cure). It’s toxic properties have been known ever since the plant was used as food, however, it was only in 1888, that its use as a war weapon became possible, due to the efforts of Peter Hermann Stillmark. It’s method of killing can be described as morbidly fascinating. It affects certain cells and disables it’s ability to produce proteins, killing it. Since it only kills certain cells, it is sometimes used as an anti cancer. There is no known cure. However, the only poisonous part of the plant are the inner parts of the seeds, which contain ricin, a deadly chemical.

Aaand now it’s Aconitum napella aka aconite aka wolf’s bane, leopard’s bane, women’s bane, mouse bane, devil’s helmet, queen of poisons, and blue rocket. It’s mostly known for its effects on the heart and nervous system. As little as 1 gram of raw aconite (raw because it will have higher content of aconitine) kills within 2 to 6 hours. Common symptoms of aconite poisoning include stomach pains, nausea, vomiting, a burning sensation in your mouth, difficulty breathing and an irregular heartbeat. Some people also report a sensation that feels like ants crawling over your body. 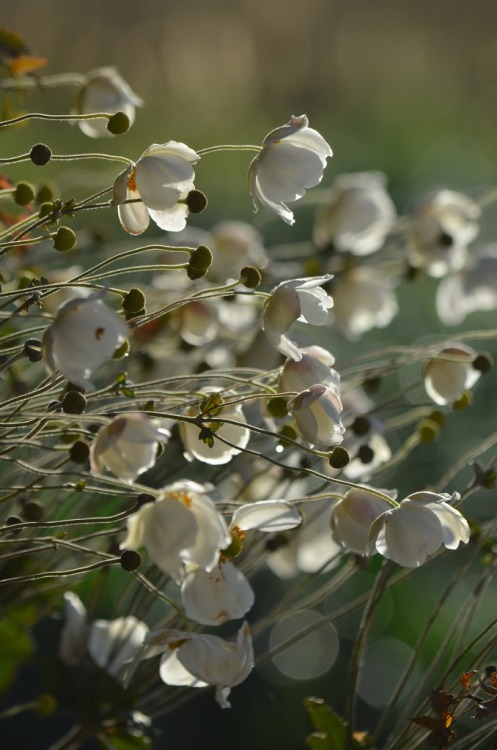 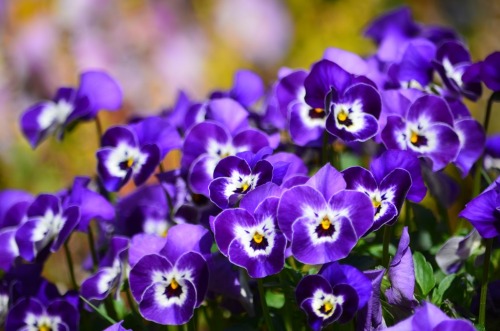 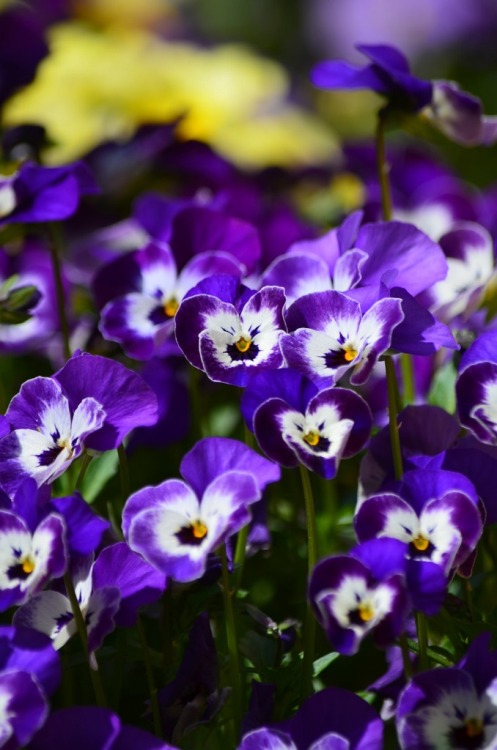 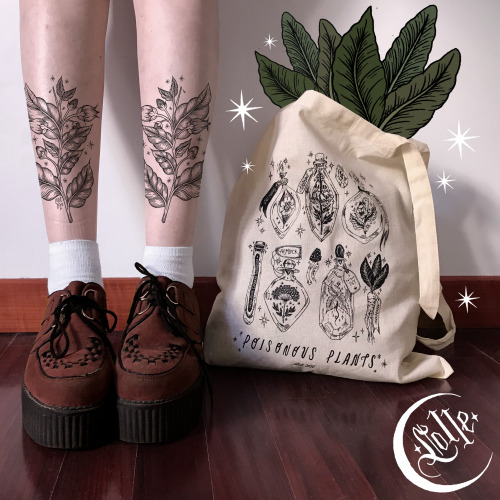 The poisonous plant for this week is…..Cerbera odollam! It’s a tree native to South India, especially regions around Kerala and Tamil Nadu. Every part of it is poisonous and it’s also called suicide tree, pong-pong (it means smelly), mintolla and othollam. It bears a fruit called othalanga, which is so poisonous that it’s downright famous there for its use in suicide and murder. So much that it makes up for 10 percent of the poisoning cases there and up to 50 percent of the plant poisoning cases in Kerala, mostly due to the fact that despite being so common, many people don’t know about its properties. Even with its deadly reputation among natives, it is sometimes used as a laxative.

This week’s Jimsonweed, one of my favourites! It’s also called Datura stramonium, devil’s trumpet, devil’s snare, thorn-apple, and many other quite flattering names. Surprise surprise, it’s also in the nightshade family, including mandrake, belladonna, hemlock, tobacco and tomatoes ( yes, tomatoes). Respiratory depression, arrhythmias, fever, delirium, hallucinations, psychosis, death are just a few side effects when taken internally.(Such a cheerful bunch, aren’t they?) As aforementioned, all poisonous plants have medicinal properties, and Jimsonweed are no exception. Despite serious safety concerns, jimson weed is used to treat asthma, cough, influenza, swine flu, and nerve diseases. And because people can be crazy, it’s also sometimes used as a recreational drug, to induce hallucinations and euphoria. As for where they are from….It’s hard to tell because it’s an aggressively invasive weed and is found almost all over the world, but it’s origins can be traced to central America.

Anyway, Manchineel aka Hippomane mancinella aka ‘The little apple of death’ is native to the Floridian Everglades but has been introduced to many other areas. As to why I have no idea, since the plant itself is sooo poisonous that just standing under the tree during storms can cause rashes and blisters (no kidding!)The fruit is toxic, and the sap from the leaves and stems is too, due to its phorbol content. If touched, the irritants found in manchineel sap can produce inflammation and painful blisters on the skin. Even the smoke produced from burning the wood injures the eyes. It’s not all grey though. As the principles of Ayurvedic medicine state, “There is no plant on earth, that, in fair doses, cannot be a lifesaving medicine, or, in unfair doses, be the deadliest venom’. As such, native people have used Manchineel as medicine, gum made from the bark can reportedly treat edema, and dried fruits have even been used as diuretics. And for some reason, the fruit (one of the most toxic parts) is reported to taste delicious, like a ripe plum, making it attractive to small children.

Another Christmas gift… This one features poisonous plants. ☠️🌿

Foxglove, though it may look pretty, has a secret dark side. All parts of of it can trigger allergic reactions, even the stem, which has minute needle like crystals which, if imbedded, can irritate the skin.

The most poisonous parts are the berries, which are at their most poisonous just before ripening. It’s not all black though. Foxglove is also used to create a prescription drug called digoxin, used to treat heart failure.

A boxed set of four 8”x10” mezzotints in an edition of 5. Signed on verso. 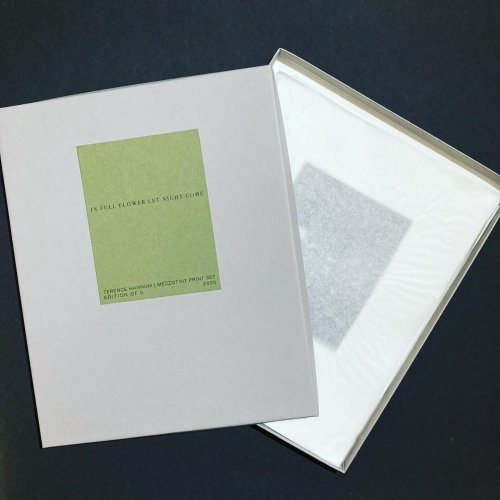 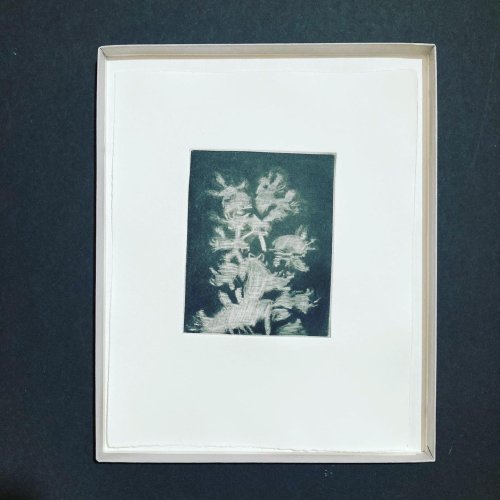 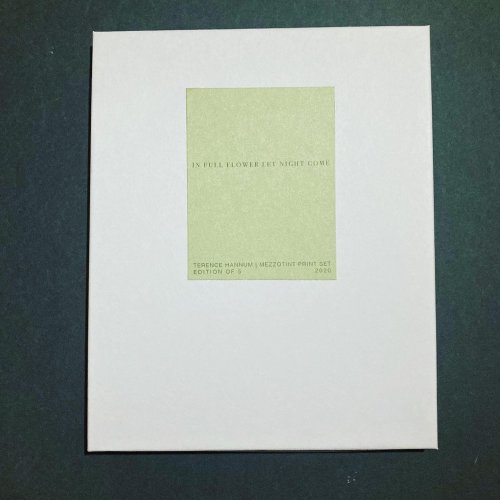 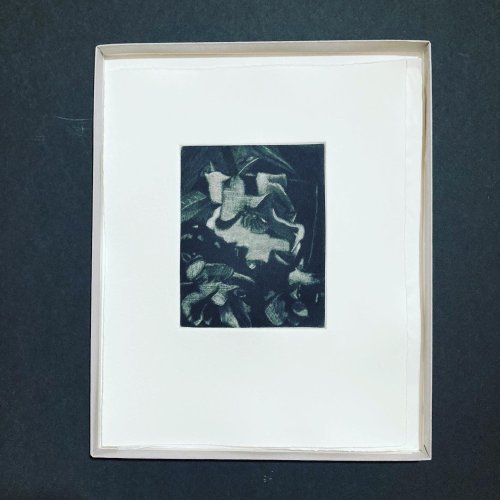 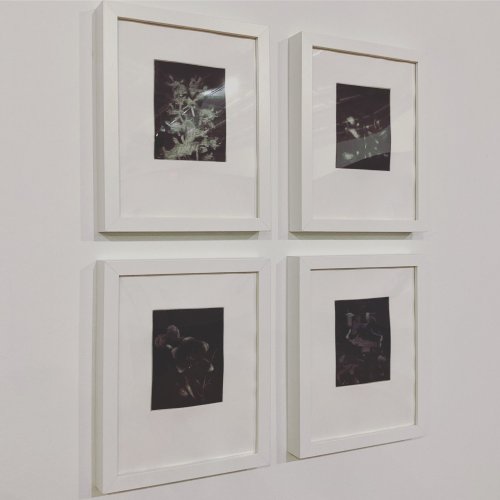 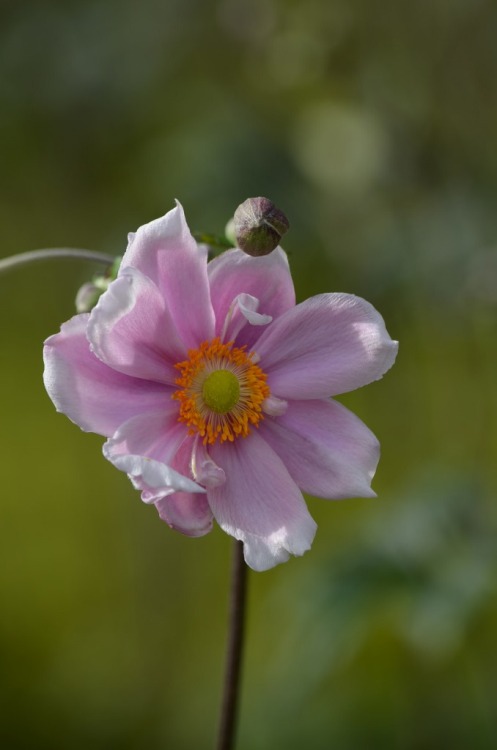 I was absolutely thrilled to find these Columbia monkshoods, Aconitum columbianum, at Beckler Peak, WA! I almost never see monkshoods - they’re uncommon on the west side of the Cascades. Monkshoods are, of course, very toxic due to the presence of aconitine. They’re featured in everything from Agatha Christie novels to Assassin’s Creed for how deadly they are, were used traditionally to hunt wild animals (this is where the common names “wolfsbane” and “leopard’s bane” come from) and they’re sometime called “the queen of poisons.” Even picking the leaves without gloves can cause heart problems in some people, but monkshoods are common garden plants nonetheless.  Aconitum columbianum has a tendency to take several years to flower and inhibits growth of plants around it, complicating its use as a garden ornamental. 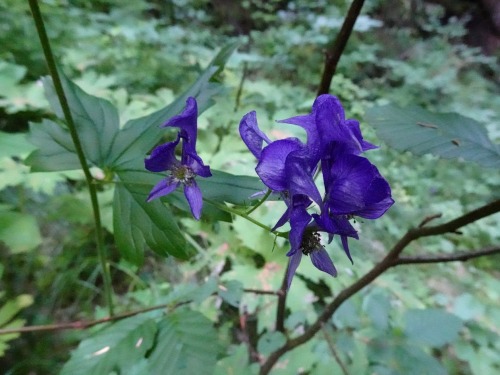 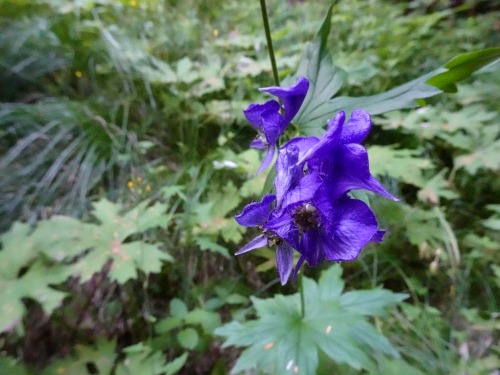 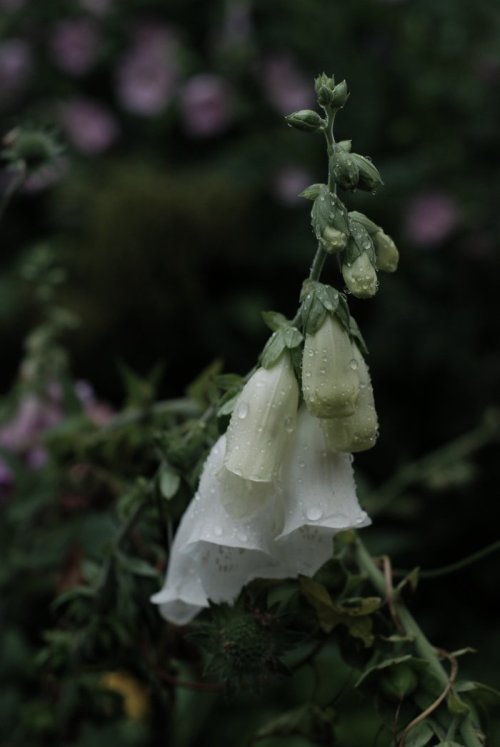 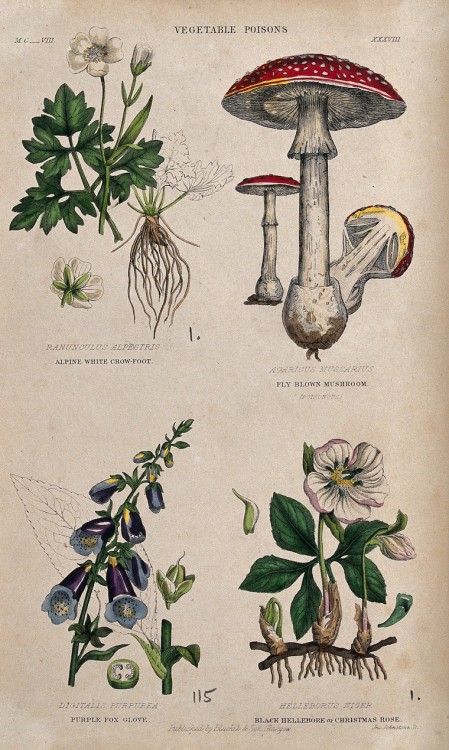 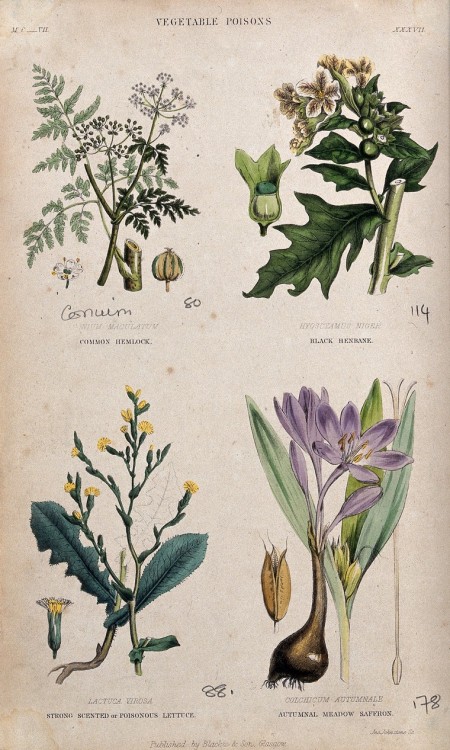 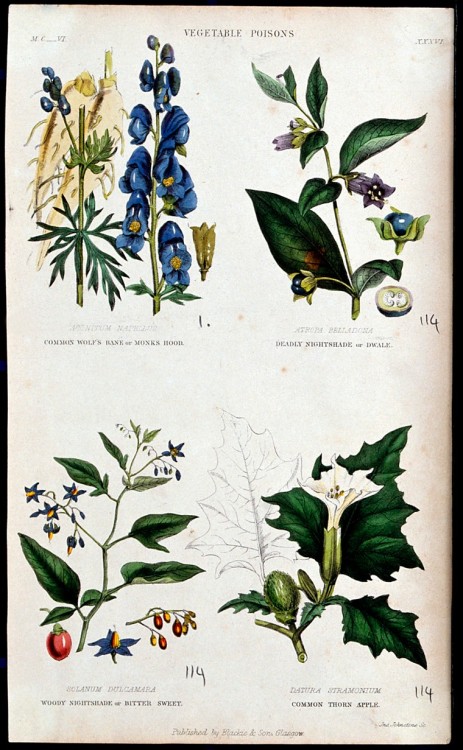 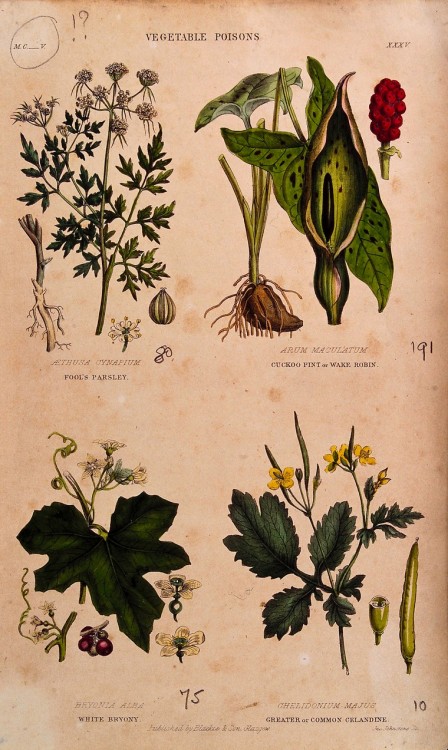