Out with her girlfriend, so I guess it’s just gonna be us answering asks today

Oh! Well things are going great between us! I mean just last week Hop and I went to the new pizza place in Wedgehurst! Overall it’s been pretty good! Thanks for asking!

I see a character with long hair and my mind immediately goes warmth!!! Blanket!!! Scarf!!!!

#pokemon swsh, #pokemom sword and shield, #kbnz, #pokemon piers, #pokemon raihan, #myart, #this ship is currently the thing that has me by the throat
441 notes · See All
feathers-and-fisticuffsText

Bede: I have no say in the matter.

Hop: (already walking away) die then

#hop, #bede, #pokemom sword and shield, #swsh, #one last shitpost before bed
53 notes · See All
feathers-and-fisticuffsAnswer
When I read your Piers HC (which is really good btw) for a second I though MC stood for Marie Condo and I like got confused

But she’s definitely have a Minccino as her partner Pokemon, and I think probably also a Mr. Mime who can help her with sorting things. And a Chansey because it’s cute? And she’s sweet and helps people heal their souls through organizing? Ugh I need someone to draw this I love it…

#ask, #anon, #pokemom sword and shield, #marie condo, #would be the most amazing pokemon trainer, #shed take one look at my pokemon boxes and fuckin vibe check the hell out of me, #they do not spark joy, #they are filled with level one zigzagoon i cant get rid of
2 notes · See All
localtransgrapeText

Hey! I know I haven’t written here in a while but I’ve been suffering some writers block. Here’s a kinda person writing based on my Pokemon Sword playthrough.

It begins post-Championship and after the Post-Game battle with Hop. So he has already become Sonia’s assistant. In which both are 18-20.

Watcher soon exited the train car that lead him from Wyndon to Wedgehurst, he takes off his wool cap in order to pull back his hair before putting it into his bag. He was so used to the snowy Wyndon weather that he forgot how hot the other areas of the region could get.

As he stepped outside of the train station and tried to ignore the cry of fans who recongized him as he sent his Cinderace, Willow, towards the lab to let them know he was approaching.

Watcher hadn’t visited in a good while- at least a year. He was worried that Hop would dislike him from the long-distance contact, despite the fact that they video-chatted almost daily.

Willow’s cry from the other side of the lab’s door shocked Hop, as he accidently smacked his head against a board. He brought a hand up to rub his now sore scalp as he moved towards the door.

“Was that a cry of a Cinderace?” Sonia called from one of the upstairs rooms, having been interrupted from her studies.

“Yeah! Pretty sure it’s Willow!” Hop called towards his mentor, as if at the mention of the other pokemon, Hop’s Rillaboom escaped from it’s Pokeball and stood beside him.

Hop laughed, “Even Rillaboom’s excited!”, he called to Sonia.

“Then open that door.” Sonia spoke, leaning over the railing of the upstairs floor. She watched as Hop opened the door, Willow’s cry sounding again before Watcher was seen from the outside of the door.

“Watcher!” Hop greeted and took Watcher’s hand as the other extended it, before pulling him into a hug.

“It’s so good to see you. How have you been?” Hop was excited. He hadn’t seen Watcher in so long- well, in person that is.

Watcher laughed as Willow stood to his side. “I’m good Hop, we literally chatted this morning.”

“You know it’s different seeing you in person! You’re the Champion!”

“Fair point. Come in then” Hop spoke, moving aside to let Watcher into the lab. The other trainer returned his Cinderace to her pokeball before heading in.

After greetings were all said and done. Hop and Watcher began to catch up.

Sonia let Hop have the day off, no work was really needed at the time, and since Watcher came in, she could handle it herself.

So Hop, with Watcher in tow, began to walk home- towards Postwick. As they walked home, they began to catch up- but it was different this time.

This wasn’t a quick video-chat at 5am before a Champion battle, this wasn’t a six minute chat while Hop had a break. This wasn’t distant.

The two got to Hop’s house and headed inside. They headed upstairs and into Hop’s room.

Hop sat on his bed and Watcher in a chair near the computer and they just talked.

They talked about everything that they could think of. Their fears, their insecurites and how lucky they were to experience what they wanted in life.

They spoke highly of one another, a fond appercation shared between them, and Watcher wanted to do it. He wanted to confess right here and right now, but he couldn’t.

As the day turned to night, Watcher shifted to sit on the floor with his back to Hop’s bed. A comfortable silence hung overhead as both- now adults- were on their phones.

A sound alerted Watcher to a text he had recieved from ‘Hop- Crush’ in which it read.

“I wonder what you have me saved as.”

Watcher turned around and looked up, only to see Hop having been looking over his shoulder the entire time- but his expression couldn’t look more surprised.

“Hop- It’s.. it'a not what you thi-” Watcher was cut off, Hop soon moving to stand as Watcher did as well.

“Say it. Please don’t let this be a dream.” Hop looked down to him (in which, Hop is taller than Watcher) and cupped his cheek with his hand.

“You, love me?” Watcher asked, glancing into Hop’s golden eyes. They sparked with a mischevous glint.

“Of course I do. You are the best thing that’s ever happen to me, Watcher” Hop leaned in, and Watcher leaned up to close the gap. The kiss that they shared was full of passion, one held back and the other being fully on display.

When they woke up together the next morning, Watcher’s body curled into Hop’s protective grasp, he pulled out his phone to notify Leon that he was taken a couple of weeks off.

Hop soon awoke, burshing some of Watcher’s hair out of his face.

I hc that piers has video logs of marnie growing up. He recorded every single milestone, and even the most mundane of things. He just loves his baby sis a lot

Pokémon Sword & Shield shifted over 16 million units worldwide despite a significant amount of pre-release controversy. Angry older fans may have promised a boycott, but the game’s success has rendered much of the backlash over “Dexit” rather toothless.

This is because Gamer Boycotts don’t really work, and the concept has been so thoroughly discredited after years of failed attempts that it invites mockery and overshadows any legitimate complaints or grievances.

From Modern Warfare 2 to The Wind Waker, whenever The Gamers™ decide not to buy something, that thing gets bought. A lot. So let’s not use the rather poisonous “B” word, eh? 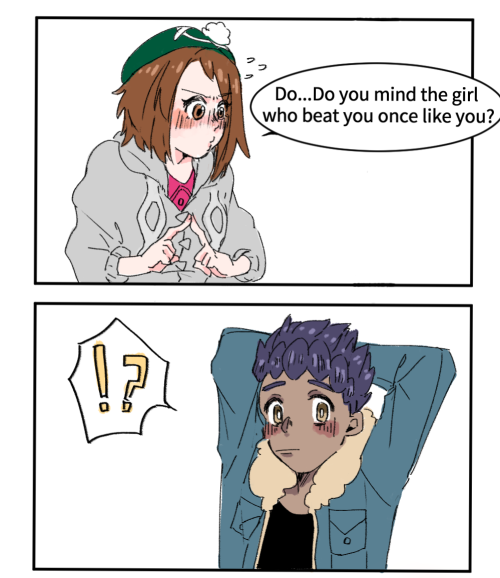 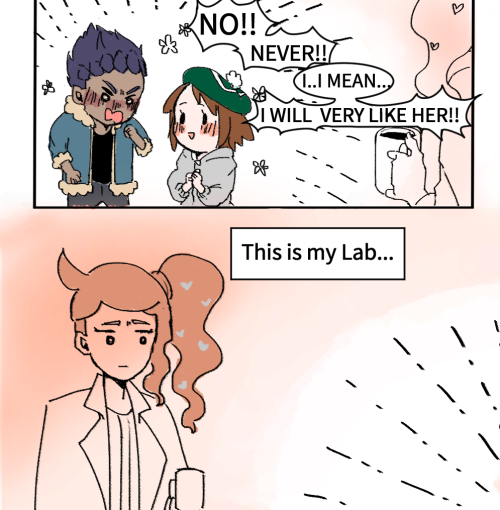 I can be or I can be

Current Level: Level 100! Thanks to exp candy from raids.

My original,pokemon, I like to think she’s super protective of me and the rest of the team.

“Lax Nature, likes to thrash about.”

I got him from my first proper raid battle. He thinks highly of himself because of it.

“Quiet nature, likes to thrash about.”

She’s totally the awkward teen of the group. She mostly ignores the others like the moody 14 year old she is on the inside.

“Jolly nature, has a sturdy body.”

The obvious underdog, I see her being a hard worker to prove she’s useful. She still loves to play fetch though!

Playful pokemon, it always want to play (and eat.) I would totally go to “play date” with hop so they can be with it’s brother.

Cranky that it was woken up from it’s nap tbh. He’s a sweetheart, but he doesn’t really understand the other pokemon.

These poor babys were either the weakest or didn’t have a type coverage I needed. I still take them out to play with the rest.

So yeah, that’s my current team! Sorry, I just wanted to brag.

Moderator Applications are officially open! We’re looking for several positions, so make sure to apply before February 15th!

Please read the guidelines (linked in the google forms), and best of luck! 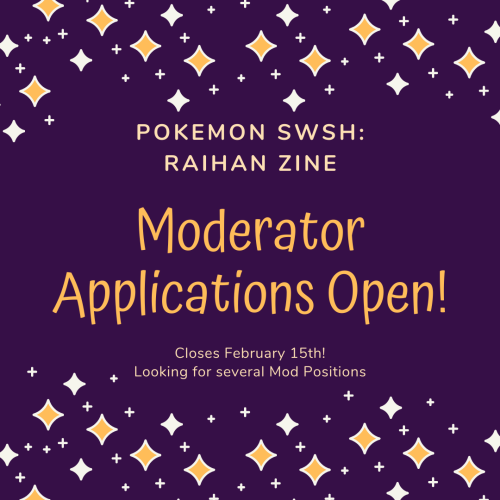 Dat 25 is Charizard! I’m trying to hatch a shiny but it’s taking forever

Today felt stiff and unmotivating, but a cute shiny Axew made it out on day 22

I recently got Pokemon Shield (my first pokemon game), and it sure is something. One of the things I noticed so far from the story was how much potential there was to make Hop more than just the typical “rival”. I already know how this story ends but I always wondered how things would’ve been if Hop had more character into him.

In this AU, it starts off as the canon story. However, we focus and push Hop’s emotions a bit more. What if Hop did notice the special attention everyone (Leon, Sonia, The Chairman, the people) seems to be giving you? What if Hop slowly grew more fustrated each time he lost against you? This was supposed to be his moment, his story, his legend. But how come you come -so nonchalant about everything- and take his spotlight?

If he can’t be the hero of this tale, then he’ll just have to settle for the bad guy.

So, yeah! In the Villain! Hop AU, most of the beginning is the same as the canon story, then starts to diverse to more au territory. Hop is a lot more aware about himself and the protagonist and eventually grows jealous and bitter over his old childhood friend (whom seems very blind about this).

Things change after the Bede loss, where in this au, Hop actually quits the challange, much to the shock and confusion from the Protagonist and Leon. It isn’t until Bede is forced out of the challange that Rose and Oleanda need a new errand boy and a new endorsed champion. Rose offers Hop to join him and with his search of the wishing stars, he can help him become even stronger, stronger than he can imagine.

Of course, Hop accepts, bent on helping Rose if it means being able to fight in the challange and become champion. Of course, the usually energetic kid grows reckless and much more troublesome against the rest of the challangers and it would be him, along with Eternatus, who the Protagonist will need to fight to save the day.

I have most (?) of the story planned out. Feel free to ask questions and stuff!