Hop is So Excited about Everything Ever and I love him. (also I love the prof’s cane a lot) 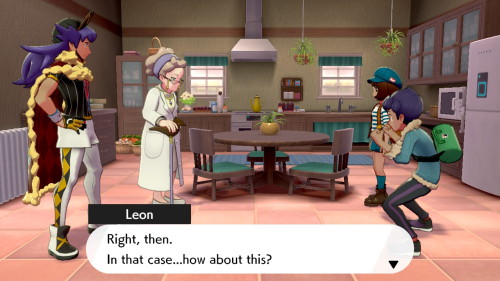 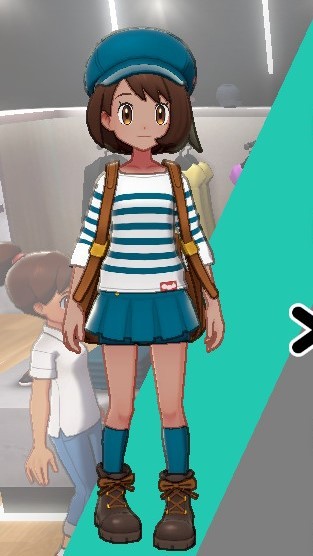 Y’all his cape is ridiculous, I love it 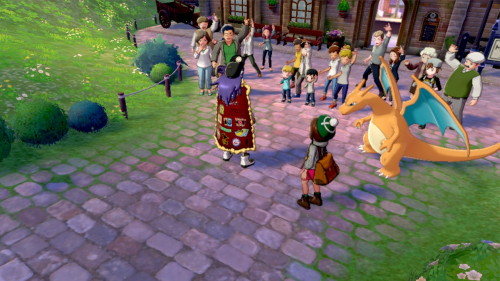 hey s/o to Gamefreak for making the Haxorus line so OP in sword and shield. i have one and it’s only Lax but holy f uc k is it a monster and it’s only lv 41.

“Where the hell is she?” Gordie grumbled. “It’s like the Opening Ceremony all over again!”

Waiting in the locker rooms, the Gym Leaders began to become restless. The Finals are just moments away from starting and Y/n is nowhere to be seen.

Leon and Raihan have gone out to look for her yet neither have said anything.

The PA overhead crackled and an announcement rang out.

Ladies and gentlemen, boys and girls; you have been waiting for this moment for the longest time. Allow me to introduce our beloved Champion!

The screen in the locker rooms flickered on and Y/n stood in the pitch. Standing in front of her was a Gym Challenger, eager to take the title from Y/n.

“So, do you think you have what it takes to take the title as Champion from me?” Y/n scoffed, flipping her cape off. “Then battle me, Challenger, and we shall see if you have the wits to take it!”

“And our Champion continues her reign!” Raihan cheered, raising a glass.

Glasses were raised, joining in Raihan’s cheering. Y/n sat at the head of the table, sinking down in her seat.

Finals ended and the Challenger barely lasted three minutes before Y/n blasted his team down.

While the Gym Leaders started to speak, Y/n slipped out of the restaurant to get some fresh air.

“You okay?” Y/n looked up to see Leon and Raihan.

“So, you two made up or something?” Leon and Raihan glanced at each other then back at Y/n.

“We wanted to talk to you without any drama,” said Raihan. “About, well, all of us.”

Y/n sighed and turned to face them.

“I’ve thought about this for a long, long time,” said Y/n. “And I’ve decided that I don’t want to go into a relationship. Not now, at least. Just…..give me time, okay?”

This isn’t exactly how I planned. Due to short term memory loss, I’ve completely forgotten how I originally planned to end this series. Thank you to those who’ve read, liked, and reblogged this mini-series! I doubt I’ll continue this series again. Ciao!

Happy birthday to the best Pokemon ♡♡

This was a fun challenge run. Dweeble, Sizzilipede, Cutiefly, and Dewpider were my main four, taking down most of the gyms without too much difficulty. Skorupi and Joltik had some good showings too.

Hardest fights were the first fight against Marnie (no moves available to easily deal with Croagunk, and her Morpeko was fast and hit hard), Bea’s gym (Cutiefly could handle most of her team but couldn’t eat a Bullet Punch from Pangoro), and Raihan (it being a double battle and his pokemon being hard hitters meant really needing to be careful about the order I took them out), and of course Leon.

Dwebble was my ace in the final battle. After a shell smash (Aegislash lead with King’s Shield), he was able to OHKO Aegis with a Dig. Rock Slide against Haxorus flinched it, then another Dig finished it off. Rhyperior came in, so I sacrificed Joltik to give me a safe switch. I should have gone with Sizzilipede to hit it with a couple lunges but went with Cutiefly instead. The Energy Ball didn’t do enough and it fainted then Rhy got healed next turn.

Rhyperior took down my Sizzilipede and Skorupi after that but was at low enough health that a Dig from Dwebble finished it off. I setup another Shell Smash against Rillaboom and proceeded to dynamax. After that, it was OHKOs against Rillaboom, Dragapult, and Charizard thanks to Max Rockfall.

(Edit: Forgot to mention, battle mode was on Set, I didn’t use non-held items in battle, and none of my Pokemon were above 67 when I faced Leon.)

STOP LOOKING AT HER LIKE THAT AND JUST FUCKING

Absol is coming back for Isle of Armor if the trailer is correct, I’m hype!