the world of remnant if poly str was canon

#unfortunately we can’t get a confirmation bc if we did salem would just die and we wouldn’t have a show, #raven branwen, #summer rose, #taiyang xiao long, #team strq, #poly str, #str crossed lovers, #IS THAT THE SHIP NAME???, #IDK
2 notes · See All
drunkscythmasterText

“It’s okay, Raven, you’re safe,” Tai told her. “We’ve got you.” He held one hand, Summer held the other.
“And we’re not letting go,” Summer added softly. “Whatever happens.
It took a while, but Raven let the armour around her heart fall, let them see her.
They didn’t let go.

Sometimes I forget poly str isn’t a canon concept and I just, cry.

Im reading fanfic rn and for some reason 3 in a row involved either Ruby or Yang bringing up who gave them “the talk” and most of them have Yang giving Ruby the talk but honestly i see it going down like this: Tai doesnt want to do it and asks Qrow to but Qrow says no so Tai tries and it goes badly so he asks one of their female neighbors and she gives the puberty talk and then later on in school health class covers the sex talk and STDs and he thinks the girls know all they need to know but somewhere along the trip across Anima Qrow finds out that Tai left the things out he thought was obvious and Qrow knows he needs to intervine before the newly dating orphans Nora and Ren do something stupid so Qrow has to give the talk and this time around is the first time Yang and Ruby find out their dad was in a polyam relationship with both of their moms and nobody ever brought it up to them bc they thought they knew

#hinacu rwby, #rwby, #Yang got armpit hair and Tai is like oh no puberty i dont know anything about female puberty, #i totally see Tai going ''please Qrow you have a twin sister and you lived with her for your first 25 years you HAVE to know more than i do', #and Qrow is like ''youre their dad you get the honor of this mortifing experience'', #''also i grew up in a bandit tribe you think we got sex ed?'', #poly strq, #poly str, #what is the ship name, #yang xiao long, #ruby rose, #qrow branwen, #taiyang xiao long, #taiyang x raven, #taiyang x summer, #summer x raven, #summer x taiyang x raven, #this is what happens when you dont talk about and wont let Qrow talk about the women in ur life Tai, #Ruby also discovers shes aroace this time
4 notes · See All
monochrome-gayText

Hi I love the poly parents

Taiyang pulled the girls close to his chest as Qrow searched for an umbrella in the bag they’d brought with them.

“I thought you said the forecast called for sunshine all week, Tai!” Qrow shouted over the sound of the quickly picking up rain.

“It did! That’s the only reason we chose today to hold the funeral, remember?” he snapped back. Ruby whimpered and huddled closer to Yang, trying hard to stay out of the rain. He scooped her up and plopped Yang in Qrow’s arms. “Fuck the umbrella, we’re gonna make a run for it!” he yelled. Ruby buried her face in his neck as he adjusted his grip on her.

Qrow plastered Yang to his left side. “Hold on tight, firecracker,” he murmured. Yang nodded and locked her arms around his neck.

As they started their sprint into the treeline, Taiyang spotted a large raven take flight.

He turned his head and focused on the forest.

what makes him think that? 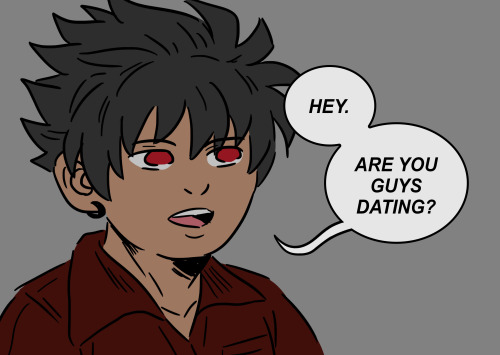 #rwby, #poly str, #my art, #this is funny in my head, #i have recently been very entertained by drawing characters with minimal effort
324 notes · See All
artbyfujiPhoto 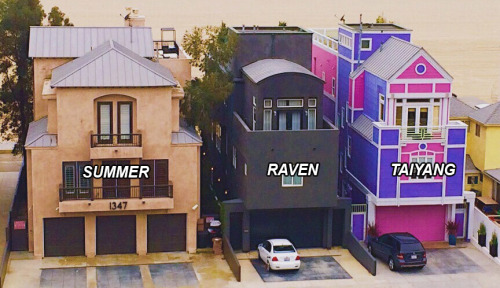 #i have spoken, #poly str, #rights, #b a b e y, #taiyang would be like hell yeah barbie dream house time boys
165 notes · See All
jamesbranwenText

If anyone wants to join my Poly STR group chat message me.

Poly STR! It is and always will be!

I’m not going to lie I got two requests back to back and both of you said please and I am just so dang happy that you both said please. Thank you!

Okay so obviously, Raven runs the tattoo parlour. I’m gonna make Taiyang run the flower shop because he’s so soft, and Summer is the customer that goes between them. Let’s go.

Wow. Okay, I’ve never had so much trouble uploading a chapter in my life. lol Hope you all won’t be disappointed.

#rwby7, #rwby, #Ironqrow, #poly str, #fanfiction, #I hate myself and how nervewracking this is, #to upload chapters for people to read and decide if they like or not
5 notes · See All
lacependragonText

Here have a snippet from Chapter 13 of Silver Rings, no context.

He popped open the jewellery box and stared down at all the little bits and barbells. Eyebrow, nose, even a pair of nipple piercings he’d gotten when he was feeling adventurous, in his mid-twenties. Those had long since healed, and he had no interest in getting them back. He was a little old for those.

Although, remembering the night he got those piercings was always entertaining. He and Summer had gotten their nipples pierced, Raven had gotten a bridge barbell, and Taiyang had gotten a line of barbells up the underside of his dick. The piercer had told Taiyang it would be three months before he could have sex “with his penis”. Taiyang had said it wouldn’t be a problem. The piercer had looked at Raven and said, “somehow, I don’t doubt that.”

If Qrow thought about it, he could still hear the three of them laughing and Taiyang’s sheepish chuckle. See the way he’d shrugged with his hands and said, “yeah, that’s fair. I do look the type.”

When Summer suggests a bit of a role reversal, Taiyang is taken off-guard. And while it’s the first time he’s done something like this, he’s curious as to where it’ll end up.

LooRaising one feisty little girl is terrifying enough when your partners are a naive, silver-eyed ray of sunshine and a pillar of strength wrapped in puns and bad fashion sense. Raising two was worse. But when the girls leave for Beacon, Raven wonders if she shouldn’t do the same. After all, what good is a mother bird when the nest goes empty? (Poly STR, background cloqwork, Summer Lives! AU)

#rwby, #taiqrow, #poly str, #poly cfvy, #team cfvy, #team strq
34 notes · See All
actually-good-rwbyaus-movedAnswer
Qrow finds out about STR becoming a thing while they're still at Beacon (how he finds out I'll leave up to you)

He guessed he always sort of knew. The lingering looks, Tai’s hand on Raven’s back, the way Summer and Raven looked at each other during sparring, Tai and Summer disappearing for hours…

So yeah, he always sort of knew.

He just wasn’t expecting to walk in on all of them curled up together in Raven’s bed. Maybe he screamed. Raven’s head snapped up from wear it was laid on Tai’s chest, almost dislodging Summer from where she was napping on Raven’s chest. Qrow’s eyes were wide with horror, staring at his team.

Raven started pushing at the other two, gently. They disentangled themselves and she rushed over to Qrow. Before she could reach him he took off, racing through the winding halls of Beacon. He found himself in the garden, hiding from his team.

All of them? Dating? Why would…why would Raven even…she didn’t want to get close. She was the one who told me…not to get close…

He scrubbed his sleeve over his face.

A shadow passed over head and he sighed, knowing it was Raven. She touched down in front of him and settled down in the grass. She gently tugged him over to her and started whispering.

“I’m so sorry, little bird,” she began, stroking his hair. He felt like a child again, even though he was twenty years old. He shrugged.

“It doesn’t matter, Rae, I was just surprised -”

“No, Rae, really, it’s fine. I just really didn’t expect you to go for Tai,” he snickered. He felt better now that he’d had a bit to calm down and think about it. She shoved him over.

“You have no room to talk about taste, Qrow. I seem to remember you ogling one of those Atlas kids. James Ironwood was it?” she teased. He gasped in mock indignation.

This was one part Qrow finding out about Poly STR and like 3 parts Wholesome Twin Interactions (and of course one part IronQrow bc I have a bias). 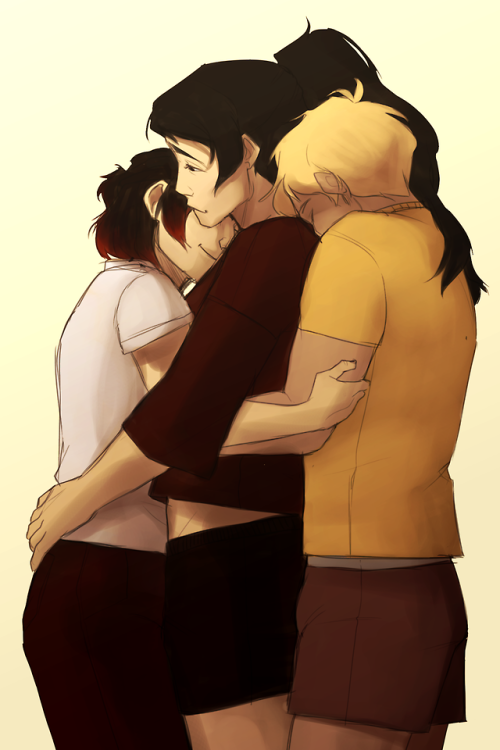