I have been trying to remember some kanjis so i made this little exercise where i write all the kanjis i can remember without looking my notes and see if i remember their sounds.

This is all i got, i know is not to much but this is only my first week learning my TL

delito means crime, not delight. your dinner with a new friend in guatemala has been a deleite, not tax fraud.

grapa means staple, not grape. unless you plan on eating office supplies with your breakfast, make sure to ask for a side of uvas.

embarazada means pregnant, NOT embarrassed. if you mess this up abroad, you might want to know the real word for embarrassed, which is avergonzado.

culto means educated, not cult. using an unrelated verb in place of a noun could cause some confusion. the term for cult is de culto. important distinction.

preservativo means condom, NOT preservative. (same goes for french.) mcdonald’s food is pumped full of conservantes. you’ll only get a preservativo in your big mac if you’re really unlucky.

tuna means prickly pear (or a group of student musicians, oddly enough), not tuna. in order to avoid ordering three teenage clarinetists in your sandwich, you’ll need to employ the word atún instead.

rapista means barber, NOT r*pist. if you’re trying to talk about woody allen in argentina, you want to use the word violador (or violadora if the perpetrator is a woman).

real means royal, not real. you can properly convey the existence of something not a part of the aristocracy with the word verdadero.

grosería means rudeness, not groceries. i’m running out of quippy transitions. the spanish word for groceries is la despensa.

♫ This Is Halloween (Finnish)

So I was feeling anxious so I took a walk outside and on my way back there was a group of Arabic speaking men walking on the other side of the road and one of them yelled what sounded like أين, أين which I think meant “where where?” at a car slowly driving past them and then he jumped on the car and the car drove off. Happy to get some unexpected listening practice and understand something!

Last week I wrote a bit about my hobbies which included Monster Hunter and language learning, I didn’t write about cooking which is also one of my favourite hobbies. Cooking channels make up over half this list.

This channel focuses around making dioramas for Monster Hunter figurines. Even if you have no interest in Monster Hunter, I highly recommend this channel. The videos are laid out in an almost tutorial like fashion, with the creator explaining what they’re doing for each step and the materials being used. I enjoy watching these videos to unwind as the music is very relaxing and I love seeing each diorama come to life and the attention to detail is exceptional!  The subtitles are all handwritten by Shibainu Oimo, and I feel that adds a very warm and personal feel to the videos as well.

Kimagure Cook which in English translates to Whimsical Cook is a channel run by Kaneko. His channel’s focuses on the preparation (including cleaning and cooking) of unusual fish and seafood with some jokes sprinkled in. I’m a big lover of seafood and Japanese cooking, so this channel has taught me a great deal of vocabulary relating to seafood as well as the cooking culture in Japan. However, this channel is not for everyone as some people may find the preparation of the seafood quite graphic.

Delish kitchen is a Japanese cooking channel that has adopted the popular first-person cooking video style. They cover a variety of both savoury and sweet recipes, so there’s something for everyone. I’ve tried a few recipes from this channel and they’ve come out great! I highly recommend this channel because of their high quality videos and easy to follow recipes!

Nigiricco is a Japanese housewife who uploads regular videos about the bento boxes she makes for her husband and son. The videos have calming music with no voiceover making this a great channel to unwind to. The video contains both Japanese and English hard subtitles making it a great way to quickly learn new words. Nigiricco also adds the recipes found in the video in the description (only in Japanese). I really enjoy this channel and it’s given me inspiration on how to prepare my own bento!

This is the only channel on this list that is actually aimed at Japanese learners. I only found this channel recently and I really enjoy it! Shino-Sensei makes a lot of content about Japanese culture, onomatopoeia and vocabulary. I particularly enjoy her story videos, as the videos are beautifully presented with a clear voice-over and I’ve learnt a lot about Japanese legends and culture. New or difficult words that have been introduced in the video are translated into English,  however there are no full English subtitles as Shino-Sensei believes they are not useful for Japanese learners. This channel is not aimed at complete beginners but at learners who are N5 and above.

Hello! It’s time for a new langblr challenge! This time the challenge is called Langblr Picture Describing Challenge and the purpose of it is to improve your language skills by describing pictures in your target language!

To participate in this challenge you must pick a random picture from Flickr, Pinterest, We♥It or other website and then describe it in your target language! You can either make a vocabulary list of the things you find in the picture or write full sentences. If you want, you can post about your progress and show which pictures you chose and how you described them. If you do, please tag your post as #picturedescribingchallenge so that I and others can see what you’re working on and learn something new as well! 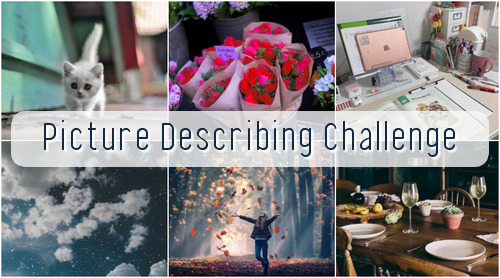 Hi! Yes, I was talking about the original post. I found your addition interesting and agree with it. Thank you for messaging me!

Hi everybody, this is my first languageblr!

축구 할래? = Do you want to play football? (informal)

The formula for the comparison is relatively simple. Noun A is more [adjective] than Noun B. Where Noun A is the reference point for comparison.

Today is hotter than yesterday

Yesterday was colder than today.

You are taller than your dad.

更 can be added to the formula above, where 更 means “even more”. This sentence structure implies that Noun B is [adjective] however, Noun A is even more so.

Cantonese is even more difficult than Mandarin.

Tigers are even bigger than lions.

Russia’s winters are even colder than Poland’s (winters).

Is your mum the same age as your dad?

My mum is not the same age as my dad.

Is this book as expensive as that book?

This book is as expensive as that book.

This form of comparison builds on the formula explained above. However, the difference is that this formula compares Noun A to Noun B, where Noun B is a reference point, to compare whether Noun A has reached the state of Noun B. In this instance 这么 means “this” and 那么 means “that”.

This orange is as sour as a lemon.

Germany is not as big as France.

My car is not a fast as his car.

This is not an exhaustive list of comparisons in Chinese, I may continue this grammar topic in a future post.

I used “Chiński - Gramatyka z ćwiczeniami” (a Chinese grammar book in Polish) to deepen my understanding on this topic before making this post.

Э is the real letter though so it’s in mirror… And I’m nice cuz I keep B as the french letter and not the Russian в which is our v. Also lil kudo for not using я instead of R.

Anyway just another day in “plz don’t use letters from another alphabet to give a foreign style to your title, it doesn’t work”

Hi! Currently only Finnish and English.

All words are taken from Magoosh vocabulary builder!

Antipathy - a feeling of strong dislike, opposition, or anger
Gambit - something that you do or say that is intended to achieve an advantage and usually involves taking a risk
Ingenuity - someone’s ability to think of clever new ways of doing something
Pariah -  a person who is not accepted by a social group, especially because he or she is not liked, respected, or trusted
To enumerate -  to name things separately, one by one
To conciliate -  to end a disagreement or someone’s anger by acting in a friendly way or slightly changing your opinions, or to satisfy someone who disagrees with you by acting in this way
To ossify - to become fixed and unable to change
To unnerve - to make someone feel less confident and slightly frightened
Effervescent - active, positive and full of energy
Copious - in large amounts, more than enough
Nettlesome - annoying, and causing problems or difficulties
Puerile - behaving in a silly way, not like an adult

Does anyone else get annoyed when someone finds out you speak another language (fluently or semi fluent) and immediately asks you to teach them curse words in that language? I don’t know how much this bothers other people here but it feels insensitive to me when it happens because it seems like they don’t respect how hard it can be and is to learn another language.