“So this is is the place you used to hide your stuff” Emilia asked looking at the huge tree in front of her.

While going back home after saving Luffy and taking the crocodile as dinner, Sabo had suggested that he wanted to go check something.

They were current hiding behind a bush using leaves and flowers for disguise.Looking at the men who were searching for their pirate savings.

“Did you find it?” One of the men asked.The other shook his head saying no.

“Its good that we moved those savings.” Sabo who was beside Emilia said softly.

"You’ve never been there, have you? For now just follow us.” Sabo said looking at Emilia.

When they reached the place,Emilia was kind of shocked at how ‘un kept’ the place was.There were garbage everywhere also the people who lived there didn’t look very friendly.

“Damn.” Sabo cursed. “Bluejam’s people are everywhere.They must be serious on killing us”

“They must be very frustrated at us.” Ace commented.

Emilia just sweat dropped looking at the boys who were sitting on top of each other, with Luffy,who was the youngest and shortest supporting the other two.

“Oh! Aren’t you the kids everyone is looking for?” A man suddenly asked.

This made the other men notice them and start chasing them.

“Should we fight them,Sabo?” Emilia asked as she ran.She was quite confident that they would win.

After a while of running,they had finally been able to out run them and were currently resting.

“Can’t believe they bought the guys at the terminal at their side.” Sabo said disappointed.

"No…For now lets not do anything.” Sabo objected.

“I agree with Sabo.” Luffy who was currently hanging on a branch commented.

“Huh? You shut up” Ace fought.

“I also agree with Sabo.” Emilia said looking at Ace. “ The reason why I asked if we could fight those guys before was because they didn’t have any weapon. And also it seemed that Bluejam wasn’t around.”

“Yeah…If he were around we would have been dead.” Sabo said agreeing with Emilia.

“No matter how strong you guys are right now,you are small.I don’t think that you guys will be able to beat those experienced pirates in strength or in number.” Emilia said. “ Especially Ace and Luffy. If you guys come across them, for now run.”

Ace looked at the girl who was staring right in his eyes, as if daring him to oppose her decision.

They were currently home and were eating the crocodile they had brought home that time.

While eating Sabo looked at Emilia and notice how she looked elegant.

“Emilia.” Sabo called out. “Were you a noble or something?”

“Huh?” Emilia looked confused of a second and then started giggling. “No,I’m not. Why are you asking that?”

“You always have that soft, formal tone you use while talking and also while you eat you always seem to maintain table manners.” Sabo replied. “And also your face is very….pleasant to look at.”

Not that all the nobles he met were pretty but they were always clean and dolled up.And this Emilia quite similar to them.

After that Ace and Luffy looked really confused. What were these two even talking about? More importantly what were table manners.

“It must be under the influence of my mother.She was always quite strict on those.” Emilia said smiling. “But Sabo,it seems that you’ve met some nobles.”

After that comment, Sabo got nervous. “Staying in Grey Terminal made me see the nobles when I entered the town…hahah….”

“Let’s forget about that.” Sabo said trying to change the topic. “Do you want to become a doctor or somthing,Emilia?”

“Uh..Not really.” Emilia said .“ I don’t really know what I want to be in the future,honestly.”

“Then join my crew,Emilia!” Luffy suddenly jumped in the conversation. “You can be vice captain and I’ll be the captain!Sabo can be my navigator and Ace can be errand boy.Hehehe.”

“Huh?! Why would we be errand boys?!” Ace shouted. “Instead you come under my crew.”

“No way!” Sabo along with Luffy objected.

This led to the three boys to start fighting while Emilia just watched them.

“Why don’t you all be captains?” Emilia suggested. “You can be captains of your own crew but you’ll have to be separated from each other.”

Emilia didn’t want that,of course.What she was doing was trying to make them realise that having each other by their sides was much better and fun. And that they shouldn’t fight.

“But…” Luffy said saddened by the fact they might have to be separated.

“Then let’s get along for now.When the time comes we’ll decide.” Sabo said as Ace also nodded his head,agreeing.

After some time Emilia stood up and started walking toward the door.They boys were currently having a bath and she decided that she would take her bath later and that she should train for now.

“Where are you going?” A voice behind her said.Emilia noticed who he was without looking.She had been training herself to always have her observational haki activated.

“I was thinking of going out to train.” Emilia said opening the door. “What about you,Ace? Weren’t you guys taking a bath?”

“Okay…Then I’ll get going.” Emilia said opening the door.And just as she was about to walk out Ace started talking again.

“I can help you with your training if you want.We could spar or something.” Ace suggested looking away.

Emilia was shocked.This was the first time Ace initiated a conversation with her and along with that he was trying to help her.

“Come on.” Ace walked past her not even letting Emilia complete her sentence.

“Damn it!” Ace shouted who was currently on the ground groaning.

“Why are you so strong?!” Ace asked.Looking at how small and skinny the girl was, along with her pure and innocent looking face; It didn’t look like she could even hurt a fly.

No matter how hard he tried the girl always seemed to read his movement and throw him away with monstrous strength.

“Wow! Emilia is so strong!” A small voice suddenly shouted.

“Shut up,Luffy!” Another voice was heard along with the rustling of leaves.

“What are guys doing here?” Ace asked standing up ,dusting his clothes.

“When did you guys even get here?!” Ace questioned again.He was already embarrassed that a girl beat him several times and on top of that he now knows that Sabo and Luffy saw that.

“They were here during the second round of our spar,Ace.” Emilia said. “How about we go home now? It’s getting quite late.”

“For what?” Ace replied staring at the duo in front of him.

“I couldn’t stop Luffy from disturbing your alone time with Emilia.”

“Is there something wrong Ace?” Emilia asked with a questioning face.

“No there was a bug.” Sabo said. After that Luffy and Emilia again started walking, Luffy talking about how strong Emilia was.

“There is no need to feel shy Ace.” Sabo said with a teasing expression on his face. “She is quite a pretty girl, you know.”

“Shut up!” Ace said walking faster trying to run away from the conversation with a noticeable red face.

Sabo just laughed at Ace. And also started running trying to catch up to the trio. “Wait up!”

HEY GUYS~! HOW ARE YOU LIKING THE STORY SO FAR?
SORRY THIS IS MY FIRST TIME WRITING SO IT’S KINDA HARD.

Just like Ace, I refuse to tone down homoerotic pining when it comes to Sanji

Absolutely! I’ll do much better coordinating this year as well! I’ll try to start setting up for prompts maybe in August, finalize as September starts! That way we have all of September.

I’m still extending AceLu week to AceLu month, so prompts will be weekly for all of October too!

Bless you Anon. I love Ace so much, and him having a crush is the cutest fluff I could ever hope to write. Also I hope this isn’t too OOC for him OTL

Ace told luffy that the tattoo on his back was his pride and joy yet when it came to saving his little brother he threw all of that aside and got punched through the back, right through that tattoo like it meant nothing.

I cant stop thinking about that tiny detail and its driving me insane.

Why cant anyone love me like those damn brothers love each other?

“Sometimes the blood rushes to my head and I feel like, if I run I’ll lose something important.”

Birthplace: an island in the West Blue

Weapon of choice: kunai and katana.

Fighting Style: Combination of martial arts/hand to hand combat with the use of her kunai, and sword fighting

Identifying Marks: Mostly her emerald green eyes are her giveaway, but she also sports a spade tattoo that has orange/red flames on her left shoulder blade

Most Likely to be Wearing: Shorts and a tank top, or a tiny black bikini

Personality: Serious and goal-oriented, but she can be playful and silly around those she is comfortable with

Dream/Goal: Change the world, see the end of the Celestial Dragons and corrupt World Government

another day at being disappointed that 2D men aren’t real

The Origin of the Mera Mera No Mi

Deuce: Could it have been a Devil Fruit..?

Ace: That was a Devil Fruit?

Ace: Wait- does that mean I can’t swim anymore!?!?

*Ace leaps into the water*

Ace: Check it out Deuce, I’m just fine. It’s not a Devil Fruit.

-Within a matter of seconds-

*Ace walks father into the sea*

You have no idea how much I love this boy

I haven’t written any of this down yet so I’m just throwing it out into the open for the people who follow me who’ve read the Silmarillion. Dismantle and drag it as you please.

there are mentions of physical/emotional abuse but nothing graphic in any way. 95% of the fic is fluff, laughter and pining. 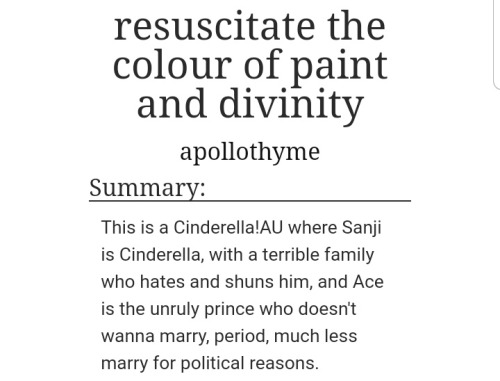 might go interrupt my roomates movie to make some toast

#one piece, #portgas d ace, #i just had some fun drawing this, #my art
7 notes · See All
freckledtilikumText

Fuck it. Trans (FtM) Ace, & Deuce did his top surgery.