Trump is getting to be like a comatose goldfish. Just when I think he cannot top one piece of sheer, honest-to-God bit of  stupidity….he swan dives off the cliffs of  stupefaction straight into the seas of asininity.

Now Trump says that he’s refusing to wear a face mask because he ‘meets presidents.’

Yeah, riiiiiggghhht. He likely just can’t stand the idea of the public not seeing his ugly bloated red-faced mug…either that, or he can’t figure out how to put one on.

#Donald J Trump, #Donald Trump, #president trump, #coronavirus
0 notes · See All
sarcasticcynicChat
Remarks by President Trump in Press Briefing, March 30, 2020
Q: I would also like to ask you about some comments you made on Friday. You were talking about governors of different states, and you said, “I want them to be appreciative.” You also said, “If they don’t treat you right, I don’t call.”
THE PRESIDENT: But I didn’t say that. I didn’t say that.
Q: These are direct — direct quotes, sir.
THE PRESIDENT: No, it’s such a — excuse me. Ready? Ready? Ready? Take a look at what I said. I want them to be appreciative of me — okay? — and then you cut it off, because it’s fake-news CNN.
Q: (Inaudible) of you and of your administration. Absolutely.
THE PRESIDENT: Listen. Just, please, let me just finish. You just said it again, and you know the answer is a lie.
Q: I could read you your full comments, sir, if that would be easier.
THE PRESIDENT: You know that your statement is a lie. Let me just say — look, your statement and your response and your answer is a lie, because here’s the story. Are you ready? I said, “I want you to be appreciative of me,” and then you go on, and then I go on, and you cut it off. But it says, because when you’re not —
Q: You said, “I want them to be appreciative. I don’t want them to say things that aren’t true. I want them to be appreciative. We’ve done a great job. And I’m not talking about me, I’m talking about Mike Pence, the task force. I’m talking about FEMA…” —
THE PRESIDENT: Thank you.
Q: — “…and the Army Corps of Engineers.”
THE PRESIDENT: Thank you.
Q: But then you went on to say, “If they don’t treat you right, I don’t call. He’s a different type of person,” you said —
THE PRESIDENT: I don’t call.
Q: — referring to the Vice President.
THE PRESIDENT: No, I don’t call. No, I don’t call the governor of Washington now.
Q: But why in this time of —
THE PRESIDENT: But Mike Pence calls, and the head of FEMA calls. I don’t stop them. ... No, I don’t have to call because I’m probably better off not, because we don’t get — he’s a failed presidential candidate. He’s a nasty person. I don’t like the governor of Washington. So you know who calls? I get Mike Pence to call. I get the head of FEMA to call. I get the Admiral to call. But what you didn’t say — see, you started it off and you talked about “I have to be appreciated,” but then, when you read the rest, it said: Because if you don’t appreciate, you’re not respecting these incredible people — the two admirals. You’re not appreciating FEMA and the Army Corps of Engineers who built 2,900 beds in three and a half days, and you’re not appreciating all of the work that’s been done, and you’re not appreciating these incredible people from private enterprise that are delivering things in numbers that nobody has ever seen. See, and that’s why people aren’t watching CNN very much anymore. That’s why they don’t like it. That’s why your ratings are no good, because you even — after knowing the truth for days now, you bring up the old lie. Read the read — the rest of your question, the rest of your statement, you didn’t put in. You have to put that in. And it said in there “FEMA,” and it said in there “Army Corps of Engineers.” Because when they disrespect me, they’re disrespecting our government.
#Trump, #Donald Trump, #President Trump, #quote, #Trump quote, #Donald Trump quote, #Trump lies, #appreciation, #respect, #narcissism, #NarcissistInChief, #press conference, #fake news, #coronavirus, #novel coronavirus, #COVID19, #pandemic, #Pence, #Mike Pence, #Vice President Pence, #FEMA, #Federal Emergency Management Agency, #Army Corps of Engineers
37 notes · See All
elborracho1Text

In other words, it’s a CHINESE virus! Please advise the lunatic left!

Putin is Trump’s john, all he has to do is tell Trump to pull down his underpants and bend over. But it’s America who’ll end up taking up the backsides.

Trust me, Putin will want some sort of anti-American repayment from Trump, cos’ Putin’s much more of a slimy snake-eyed mobster than a politician.

Putin is a heartless no good power-mad cockroach of a dictator—he’s NEVER done anything nice for anyone. He HATES America and everything we stand for.

i KEEP TRYING TO EDIT THIS, BUT TUMBLR EDIT NO LONGER WORKS—-Tumblr really has broken their own website—tho’ the trash can icon is FINALLY working.

Niedel is a member of the Rhode Island Democratic State Committee.

#ivanka trump, #trump, #donald trump, #president trump, #obama, #politics, #cnn, #rhode island, #democratic party, #democrat, #democracy, #democrats
38 notes · See All
sarcasticcynicChat
Remarks by President Trump in Press Briefing, March 28, 2020
Q: What more, specifically, do you want the governor of Washington and the governor of Michigan to be doing?
THE PRESIDENT: All I want them to do — very simple — I want them to be appreciative. I don’t want them to say things that aren’t true. I want them to be appreciative. We’ve done a great job. ... Because we have done — we have done a job, the likes of which nobody has seen.
Q: So it’s the words they’re saying that you’re concerned about? It’s not that they’re —
THE PRESIDENT: I think they should be appreciative because you know what? When they’re not appreciative to me, they’re not appreciative to the Army Corps. They’re not appreciative to FEMA. It’s not right. These people are incredible. They’re working 24 hours a day. Mike Pence — I mean, Mike Pence, I don’t think he sleeps anymore. These — these are people that should be appreciated. He calls all the governors. I tell him — I mean, I’m a different type of person — I say, “Mike, don’t call the governor of Washington. You’re wasting your time with him. Don’t call the woman in Michigan.” All — it doesn’t make any difference what happens —
Q: You don’t want him to call the governor of Washington?
THE PRESIDENT: No, no. You know what I say? If they don’t treat you right, I don’t call. He’s a different type of person. He’ll call quietly anyway. Okay? But he’s done a great job. He should be appreciated for the job he’s done.
#Trump, #Donald Trump, #President Trump, #quote, #Trump quote, #Donald Trump quote, #appreciation, #NarcissistInChief, #Trump bullying
1 notes · See All
suzysheartLink
Best Sister Donald Trump Mug 12ozhttps://posh.mk/2Q2mBzGfl5

and I thought, what better way to spend it than to make fun of the biggest Fool of them all? I present to you: The Chump Check.

Available in numerous forms via RedBubble. (I recommend the small sticker!) Any potential profits will be donated to COVID-19 relief.

THIS WAS CREATED FOR SATIRICAL PURPOSES, ONLY.

While the financial help is appreciated, The Chump thinks he can buy us out of this entire situation with one measly check while masses of us are sitting at home, unemployed, on reduced hours, etc., while those who aren’t have to face potential exposure on the front lines. I don’t know about you, but this is a pretty weak solution. 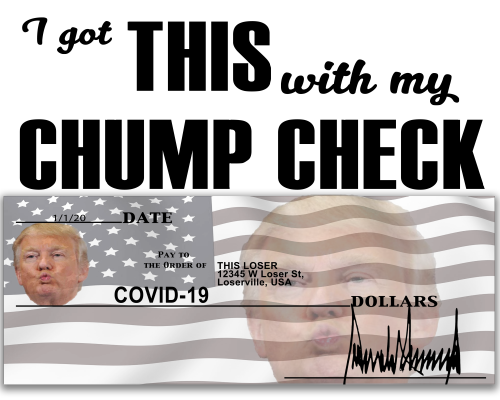 President Trump is not a leader, so much as a scared little worm crawling through the dirt of life, vainly hoping he’ll be overlooked by the fishermen and women of the REAL NEWS media

And, since he can’t run away and hide on his golf course, Trump is pitching baby tantrums, calling the news ‘fake’ and calling reporters names like a playground bully, and refusing to answer perfectly normal questions that would be asked of any leader. Rather than reassure the public, Trump freaks out and tells them lies, focuses on his poll numbers and tells us not to trust the media. At a time when we need to depend on the media the most.

In a nation full of Fox News watching Pro-Trump sheeple, telling them not to trust the news, telling them outright lies, is like telling them to go out and and cross a four-line Interstate highway without looking both ways. People are going to die. President Trump is not only a loser–he’s a murderer.

In times of struggle, we see the true greatness of the American character.

Americans from all walks of life are rallying together to defeat this unseen enemy!

A Republican Chairwoman claims that Trump is ‘working around the clock.’ to combat the Coronavirus. Hence she’s not afraid of God or her nose getting longer.

Trump NEVER actually worked a day in his life—he’s a lazy illiterate spoiled brat with the attention span of a goldfish, whom has never had to pick up after himself, take out the trash, wash his clothes, shopped for groceries, did odd jobs around the home,  mow a lawn, cook food, put gas in the car or plunge a toilet.

He’s never been to a gym, walked a golf course, visited a library or museum, read a book, driven a car, done volunteer work, or ridden a horse or a bicycle.

Trump is a habitual, life-long do-nothing.