I’m arguing with Snaters even on Pinterest, idk if this is tiring or amusing lol

snape: look, if we’re going to make it work between us, one of us should really take on the more sensible role here.

sirius: dibs not it.

snape, with feeling: damn it.

i don’t see it. there are a few similarities- anakin and padme knew each other as children just like lily and severus, anakin was from a lower class (he was a slave) and padme was part of the elite- severus was born in a slum and lily seems to be middle class. anakin went to the dark side, severus joined the death eaters. anakin and severus indirectly caused padme and lily’s deaths, anakin because of the whole ‘will to live,’ thing and severus because he gave the prophecy to voldemort.

but there are many differences. for one, anakin and padme were in love but lily and severus were best friends. there’s debate about severus’ feelings and jkr seems to think lily would have been receptive but in canon, they’re only friends. anakin’s great power allowed him to escape slavery and gain acclaim as a general. severus’ great power only allowed him to seem useful to purebloods and he hoped to use that to get out of poverty. ironically that only happened when severus defected.

anakin turned to the dark side in order to have enough power to save padme, severus turned to the light side in order to protect lily. padme was not willing to give up on the relationship despite signs of anakin deteriorating ( like when he killed women and children out of grief). lily saw signs of where severus was heading and she ended their friendship.

anakin remained with palpatine after padme’s deaths and he only redeemed himself before his death. severus continued working with dumbledore to protect lily’s only child. padme died before the rebellion was properly formed so we never got anakin and padme fighting on different sides of the war but we got that with lily, who joined the order, and severus.

(2) Do you know who has a big nose with an uneven bridge, a vitamin deficiency that causes my olive skin to appear sallow, dark “inscrutable” eyes, and crowded bottom teeth? ME. Do you know who got bullied mercilessly for those traits barring the entirety of the rest of me, chalked up as the ugliest creature to ever walk the earth and causing me to beg my mother for a rhinoplasty by the time I was 12? ME. Do you know the main reason why? Because those traits were, are, at least where I

(3) live, considered a signifier of *Jewishness*. It’s spouted over and over and OVER since the 1000s as antisemitic propaganda. I’m half (my mother is goy), and my sister, barring her hair, looks goy. Button nose. Rosy skin when pale, rather than yellowish. Her dark eyes are warm and her slightly crowded teeth quirky because people don’t know what she is. I am visibly, and now actively, Jewish. It’s gone so far as people saying my “inscrutable” dark eyes were empty-looking (like Sev’s)

(4) because, as insert-slur-here, as a non-Christian, as a half-blood (yes, REALLY) I had NO SOUL. Please imagine my face taking up a new book at like age 6 and finding the most unlikeable ugly horrid etc etc character described exactly, EXACTLY, as I was, except my hair was curly. Please imagine my face NOW with people making the same bloody argument 20 years later. Snape’s “ugly” traits are inherently antisemitic, and I’m very, very tired. Sorry for the rant ugh

don’t apologise. i’m sorry that you went through that. i feel like snape hate that focuses on his features and clothes esp before he worked in hogwarts is classist. i can’t speak on behalf of jewish fans but you’re not the first person to point out the antisemitism of it all. 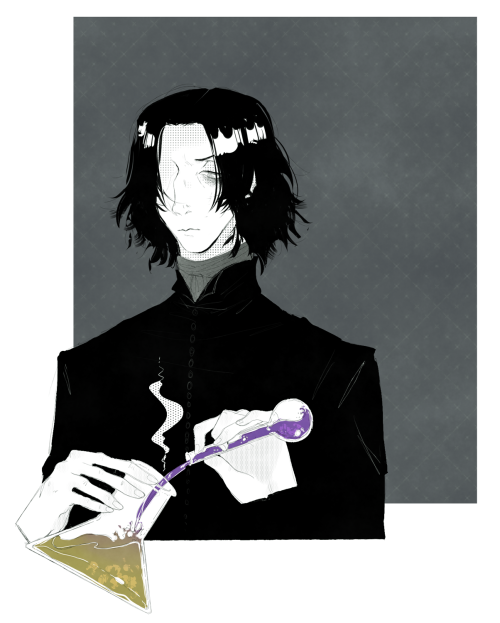 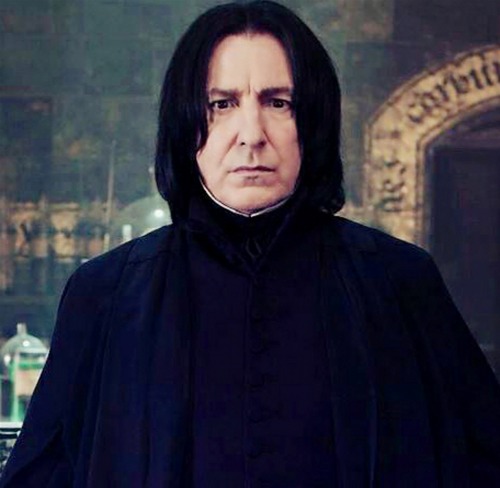 A teenage Severus finds a quiet spot in the Slytherin common room to watch the Hogwarts new years fireworks reflect and shine on the black lake.

Some light can reach even the darkest depths 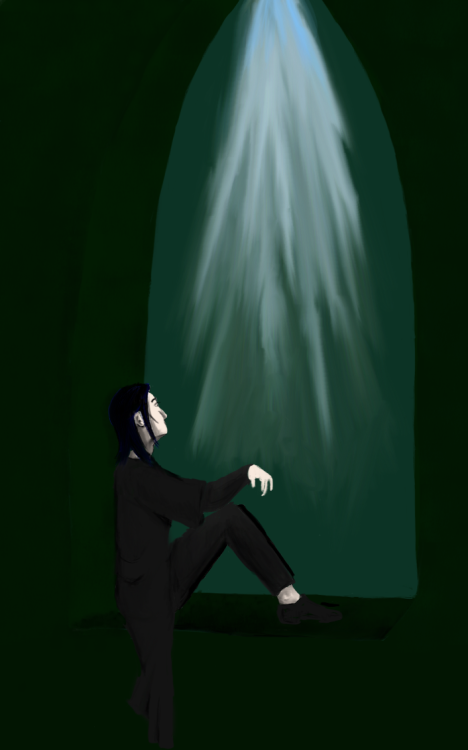 I see a lot odd people comparing blood status to race when it comes to SWM and dynamics between Snape, Lily, and James as a whole.

Firstly, that is a flawed comparison. But Jesus, if it’s a comparison you’re gonna make then at least make it well!

It wouldn’t be a case of a white boy calling a black girl a racial slur and lusting after her, while another white boy fights the racist to protect people of colour everywhere.

What it would actually be comparable to is an impoverished mixed race boy being bullied by a rich white jock “because he exists.”

The mixed race kid, in a highly stressful situation, calls his best friend, a black girl, a racial slur that applies to him too.

The rich white boy harasses the black girl because he feels entitled to her: he should be applauded for being willing to shag a black girl.

The mixed race kid is taken in by a group of white supremacists, they are the only people in the school to accept him, they look past his tainted skin because he can be useful, he is likely afraid of what they will do to him if he doesn’t play along, they know where he sleeps.

The whole world seems to be against the mixed race kid and in favour of the group of bullying white boys.

To the mixed race boy, it eventually feels like the only people who care are members of a white supremacy cult.

He can live with that.

Only one black person is ever been nice to him, clearly she was an exception.

The so-called ‘Light’ never did anything for him - was cruel, in fact - so clearly they are not the people you want to stand with.

We know this feeling, so let’s see if someone recognises the fic:

Nonny, we don’t know this fic, but let’s see if someone recognises these details:

I’m new here, y'all. Please accept this quality meme my dude made after I ranted to him about my current WIP. 😂

it’s not a band-aid that you need. 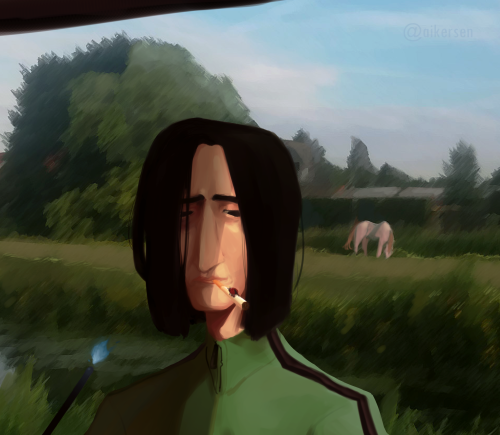 #if you cover one side of his face the other will be the exact opposite#Severus Snape#pro snape#harry potter#art#dont repost#my hc is that severus snape wears muggle tracksuits as they got popular in the time that he was born - around the 60's and the 70's#he thinks he's cool wearing them (he's not)#((another note: perhaps he does it just to be uncool#then fine - that would make him cool))#you know what -- painting is cuckin hard mate#雞雞#snape: wants to smoke --- ladybug: APPEARS CONVENIENTLY#second painting in my life now we're finally going places *menacingly rubs hands*#it's fun slipping hehe fanart hehehe into schoolwork#tw abuse#just to be safe for u fam -- for that blue eye he got#good day to you
22 notes
dionysus-lover-ao3
Text

I said it. Thank you.

Summary: Andrea seems to be just another Slytherin pureblood, young woman, ready to face her senior year at Hogwarts. She would have never expected the Goblet of Fire to choose her, among all the others. What Andrea will need during this amazing year will be her closest friends, new and unexpected antagonists and the help of a mysterious, dark and fascinating professor.

Hey guys! The amazing @ottogatto wants to make a series of videos debunking claims of Snaters, and she made a Discord server for anyone who wants to be a part of the project!

We need people who can edit, film, write scripts, and be great on camera among other things! Join if you want to be a part of something great!

Can someone write a fanfic or something on Snape actually facing his fandom?

Like… He would go from alone and neglected to billions of strangers caring about his health and happiness.