haha, thank you! writing is the one thing that consistently gives me joy & confidence so it’s a good feeling knowing that i can share some of that happiness. to be honest ive never really been this efficient/fast a writer before, in any fandom ive been in? the gg kids just really bring it out of me.

right now my workload at uni is so much that im not actively accepting requests (maybe one day) but suggestions are always fun, and it’s funny that you say that, because i actually….had a plan for a one shot like that, a few months ago, that i never got round to writing.

it went along the lines of: once dan is untied from the statue, nate gives him his sweater so that he doesn’t have to walk around in his boxers. he can see that dan’s still a bit rattled and shaken up by everything, so he asks dan if dan would want to spend the night at [ whatever single dorm nate is staying in. ] dan looks grateful while looking like he is trying not to look grateful. he says yes.

they have a great time together. talking, playing card games. watching movies, discussing sports and comics. it feels like they’ve been friends forever, and nate can see dan start to relax, bit by bit.

and then….. of course: there is only one bed.

you see where this is going! wow, i might actually write this at some point. but it would take a while to get into boyfriend territory, because they’re both pretty repressed, albeit in different ways.

also, for now, when it comes to gay S2 AUs, im working on a canon divergent thing from 2x05, which will go the chuck/dan route. there was something really intriguing there that i want to explore, but it’s going to be pretty tragic in places, of course. it IS endgame nate/dan, and!!! there is no catherine!!! the fact that there is no catherine makes me very happy, at least.

[WP] The villain scoffed “You really think you can win? The prophecy was very clear that no-one can defeat me.” The hero replied “Exactly.” before their voice shifted to sound like a completely different person “We are not… one.” | | Want to submit a writing or a prompt? Read the rules here

Hello everyone, and welcome!

I did this because I wanted to, okay? X’D

Anyway, Mastermind AU time, let’s goooo! Tag your work with #mastermind march 2021 so I can see it! <3 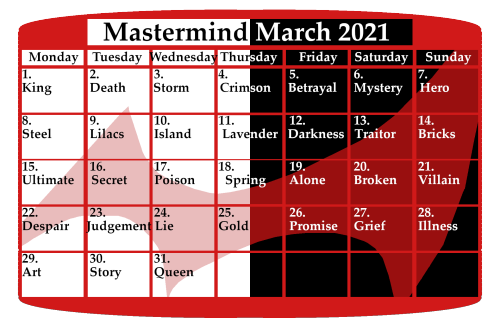 [WP] The witch gave you the spellbook as a prank. The magic works, but all of the spells are mislabeled. | | Want to submit a writing or a prompt? Read the rules here

Ooh not many people pay attention to that teensy little turning point, I hope you like these!

“I thought you hated me.”

“I despise of you, but uh…I’d rather you don’t die in the cold.”

“Yeah, I guess. I got this sticker handmade. You read?”

“Obsessively. Holy shit, have you read the new chapter?”

“Oh my god, yes! That cliffhanger, I swear.”

“Did…you just compliment me? Woah, and I didn’t throw up!”

“What are we now, friends?”

“Look, I’m only hanging out with you because you know good restaurants here.”

“Suuuure, definitely not because you enjoy my company.”

“You know what? I always thought you were a prick. Turns out you’re just a twit.”

If you join in, please do tag your posts with #30DaysOfDoodles and #30DaysOfDoodles2021 so everyone can find and support them! I look forward to seeing what you create! :)

Today’s prompt: doodle a familiar character with a new hairstyle 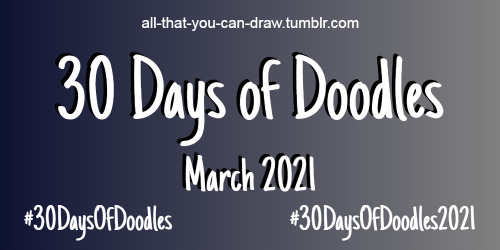 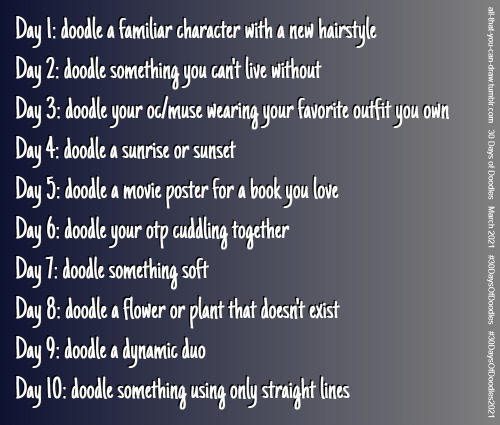 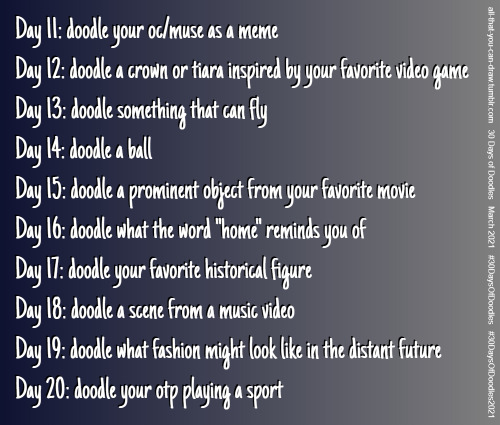 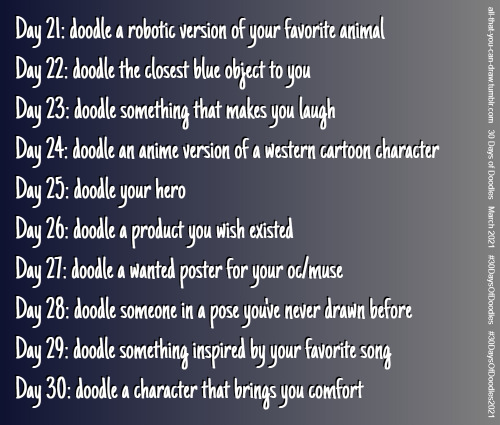 “Quick! Back under the shelter!”

“Urgh, I don’t think I’ll ever get used to this. No more swimming, no more puddle jumping, no more singing in the rain… all because of this stupid curse where I can’t touch water without getting hurt.”

“Sucks, doesn’t it. Wait ‘till you’re me and you phase through stairs when you try to go up them because you didn’t realize you’ve gone intangible-mode.”

“I put the die in dihydrogen monoxide.”

“I’ll work on it. I’m stuck under here until it stops raining anyway, so you go get supplies while I think. Just… don’t get stuck through a tree again. It was a pain waiting for you to go intangible so we could get you out of the bark.”

Tiny streams of water flowed down the cave walls like miniature waterfalls. Overhead, geo-dotted stalactites lit up the ceiling, glowing in a cascading constellation of sparkles. The gentle sound of dripping water echoed. And at the centre of the cavern, lying in the scuffed-up dirt, were a pair of broken shackles.

“what if kinkshamming is my kink?”

I’ve been sitting on this one for awhile, trying to figure out what would have happened to have made Hermione do such a thing.

Then I got a prompt in my inbox reminding me about a drabble i wrote about an implied rape.

It is not a happy ending.

There will be more to this story, so if you wrote me that prompt, don’t fret, justice will be served.

i was hoping someone would ask this

i really want to write it but i don’t have the energy XD that and it’s such a god idea, i want to do it right you know?

only if someone else does it too

i’m looking at u but it could be anyone

Also a possibility if I find an in—there’s a very particular feel that that one has and it’s not necessarily easy to conjure.

Hero hauls Villain up by the front of their shirt with ease, holding them above the ground by several feet. Villain’s gun lays crumpled in Hero’s other hand, twisted around their fingers like warm putty.

The muscles in Hero’s jaw are prominent as they crush a still-smoking bullet between their teeth.

“Oh,” Villain whispers, a flush on their cheeks, “You are strong.”

(If you use this prompt, reblog and/or tag me for credit.)

[WP] Everyone pictures the evil empire as a bleak dystopia. You, however, live in the evil suburbs and aside from… a few things… life is pretty normal. | | Want to submit a writing or a prompt? Read the rules here

A serial arsonist but he only starts fires with a flint and bacon grease.