Type - Fire/Psychic
Height - 5'3"
Weight - 167 lbs.
Ability - Insomnia/Forewarn (Hidden: Fluffy)
Pokédex Entry - Hypno in this region have developed a soft, fluffy ruffle that is highly prized for the production of scarves. Not only is it soft, but also flame-resistant!

I feel like drowzee and hypno often get overshadowed by the abra line… But they can really hold their own on a team. (Not to mention, you don’t need to rely on a trade to evolve them!) 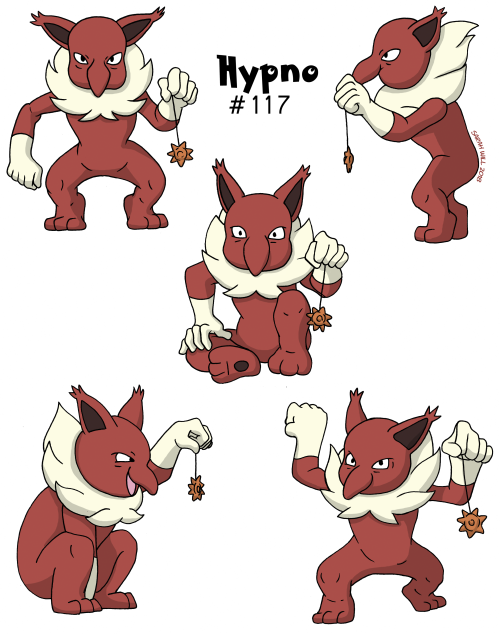 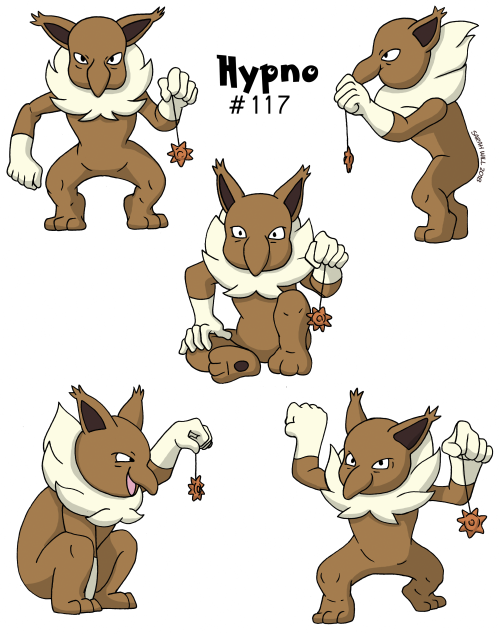 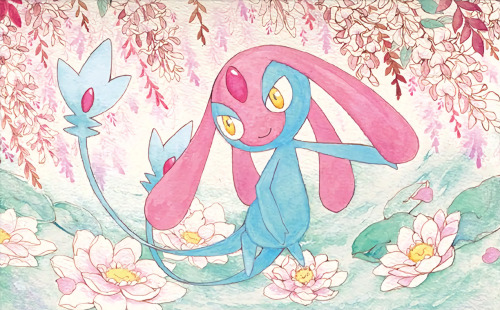 This not-terrible shiny exeggcute was actually an auto catch! Pretty cool to evolve it to exeggutor! 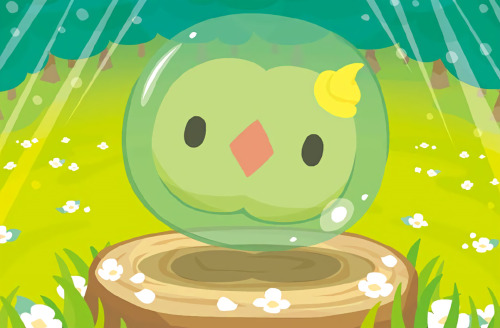 Ah, Espeon, a pokemon near and dear to my heart. While my love for psychic types often got me laughed at by other hex maniacs in my youth, given how we were supposed to be devoted to ghost types, I would never leave home without dear Sphynx at my side.

I was something of a… clumsy child, to be honest, constantly falling over or walking into things, and back when Sphynx was an Eevee, she got quite good at predicting when I was about to do so, alerting me to things before I could hit or trip on them. This, along with the love I poured into her (and something of a fear of the dark that limited my nocturnal activities, don’t laugh!) likely resulted in her eventual evolution into an Espeon, the desire to protect their trainer that and their precognitive abilities made her quite adept at predicting when I might injure myself. While I have grown out of that clumsiness (mostly), her precognition has come in useful a number of times, preventing criminals like Team Rocket from getting the drop on the lab, helping us head off the occasional rock slides we experience here at Mt Rosewood, and predicting issues that arise among the other pokemon at the lab.

The intriguing thing about this trait is that, rather than using their psychic abilities to predict things, instead they use their forked tails to read air currents, and make predictions based on that. While we are still studying the full ramifications of this particular ability, we have discovered that it synchronises well with abilities that heighten evasion, such as Double Team or particular applications of Accupressure. Even blindfolded, this ability can be usef quite effectively. While pokemon breeding is far from my speciality, I theorise that an Espeon crossbred with a pokemon that makes predictions based on psychic techniques will find their precognition boosted to quite extraordinary levels, making them excellent as both helper pokemon, assisting those who suffer from seizures and other such problems, and in battles, where an opponent will have a very hard time hitting something that knows what they’re going to do before they do.

Mew as a horse! I decided to make its mane with the shiny color.

Well, there are several different types of Pokémon I could suggest, but I’m not a therapist or psychologist, so I’m not sure what sort of Pokémon you’d be looking for. However, I do know what types of Pokémon would help with certain situations!

Fighting type Pokémon are good for doing physical tasks if need be, should you become overwhelmed or overstimulated and unable to perform tasks.

Psychic types are good at telling when someone is close to a breakdown or an episode, and they can figure out what the best course of action would be to either stop it or to make it easier on the person.

Normal types excel at having super soft and plush coats, so they could help with sensory issues that revolve around touch, or in some cases, even hearing.

Every type has some sort of way of helping people, but those are just a few options!

Inhaling Munna’s mist will allow you to experience the last dream it had eaten. You may be having that same dream for several nights though.

Reuniclus is a tiny baby encased in a blob of green gelatinous stuff. A Psychic-type, it’s seemingly a reference to cells, with the green stuff resembling cytoplasm and the objects inside it resembling organelles. The split down its head evokes the split at which some cells begin dividing, known as a cleavage furrow. I’m not a biologist so I don’t really know a lot about what all this means, but it sounds interesting!

Anyways, the most striking part of Reuniclus’s silhouette is probably its arms, which outsize the rest of it by quite a lot. Reuniclus apparently controls its arms using its psychic powers, which imbues them with boulder-crushing strength. Apparently it also prefers to fight in battle by swinging its arms to “beat opponents into submission”, despite its ability to fight with psychic powers, which is hilarious. It’s not often a Psychic-type’s physical capabilities are emphasised, and Reuniclus does so in a rad way! Ironically, though, its attack stat is still far lower than its special attack.

Reuniclus is also said to be able to amplify its psychic powers by shaking hands, forming a network between their brains, which is reflected by some TCG attacks such as Net Force here. It’s subtle, but this amplification aspect is also showcased by the design quite well. The coloured objects in the arms progress from green to red, increasing in size – similar to the gradiants commonly used to denote sound intensity with volume control.

Reuniclus has also had a historic association with a very cool attack called Trick Room, and though there are better users of it now, I consider Reuniclus to probably be its most emblematic user. Trick Room is a move that warps the dimensions to reverse the order that pokemon attack: slower pokemon move earlier and faster pokemon move later. For a pokemon with a mere 30 base speed like Reuniclus, this is hugely beneficial. It’s a strategy most potent in doubles, allowing the user to set it up whilst its partner is free to attack, and can be incredibly hard for most teams to contend against because most teams try so hard to go as fast as possible.

Shiny Reuniclus swaps the green jelly for blue jelly, which is a cool shift, but the arm objects terminate in cyan which has a lot less contrast and doesn’t fit the amplification theme nearly as well. The body is also a yellowish colour, which is more distinct from the jelly, and a pale blue may have been more cohesive. Still a good shiny overall, though.

Reuniclus is rad, and probably one of the most creative Psychic-types in existence – high praise, given how creative that type often gets. I love it quite a lot, and its design feels hugely iconic even if it’s not one of the “big” pokemon.

Type - Fire/Psychic
Height - 3'3"
Weight - 72 lbs..
Ability - Insomnia/Forewarn (Hidden: Fluffy)
Pokédex Entry - When the steel mills were constructed, the temperature in the immediate area increased. The Drowzee in the area evolved the Fire-Typing to cope with this change.

Of course I also made some Pittsburgh variants of some of my favorite Pokémon!

I have a special place in my heart for Drowzee and Hypno after using one in my Sun playthrough. 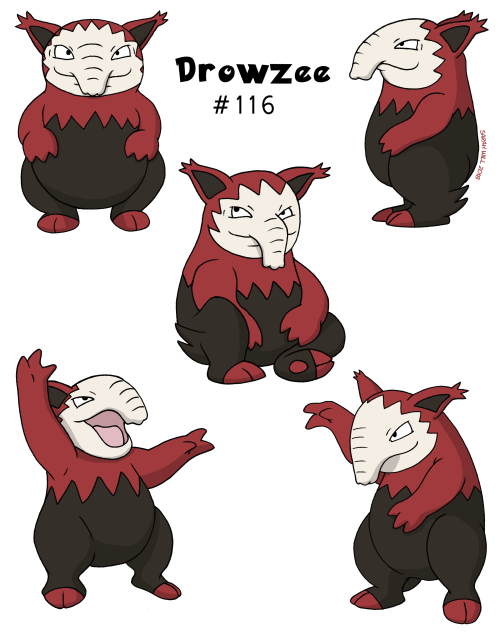 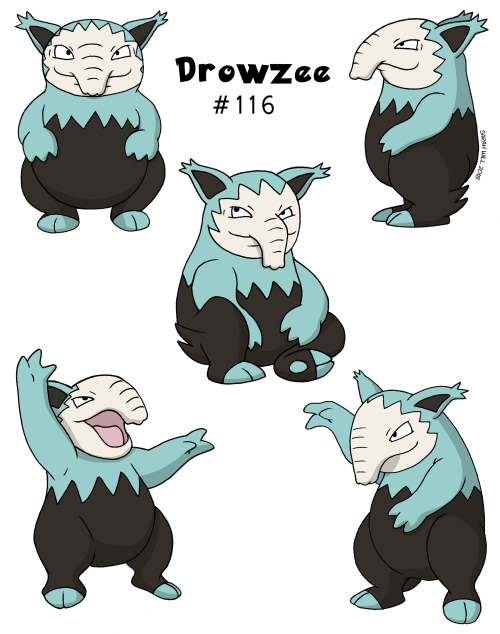 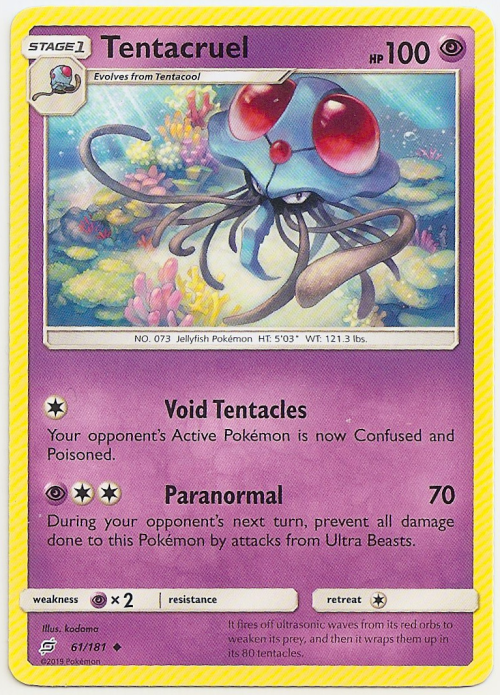 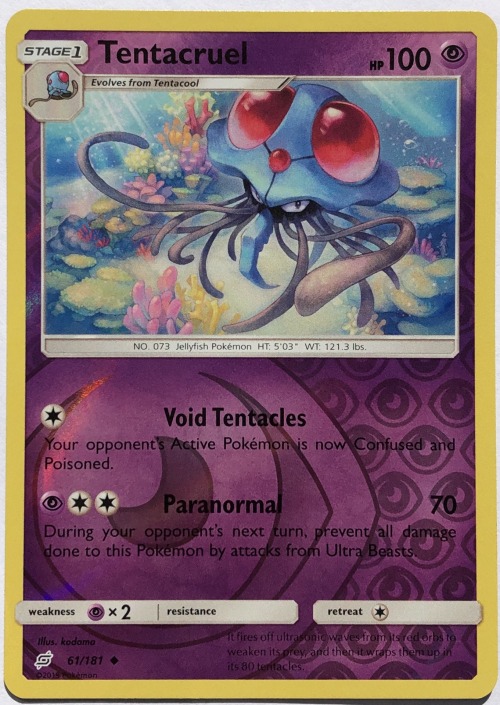 You traitor! I thought you were a new evolution line in Pearl, but you turned out to evolve into Chimecho!

Both Meowstic have such pretty designs; I had to go back and catch an Espurr to evolve after I first saw them! I don’t typically go out of my way to have both gender differences when it comes to Pokémon, but I need to get both Meowstics! I already have the female, and I’ll work on getting the male after I work on my Pokédex some more. 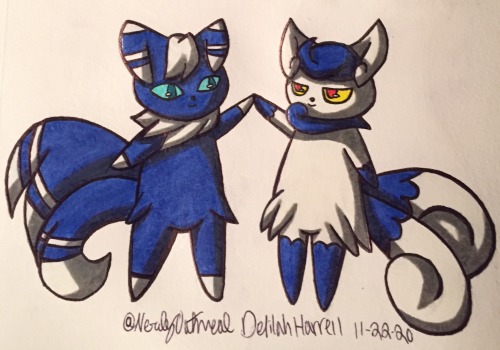 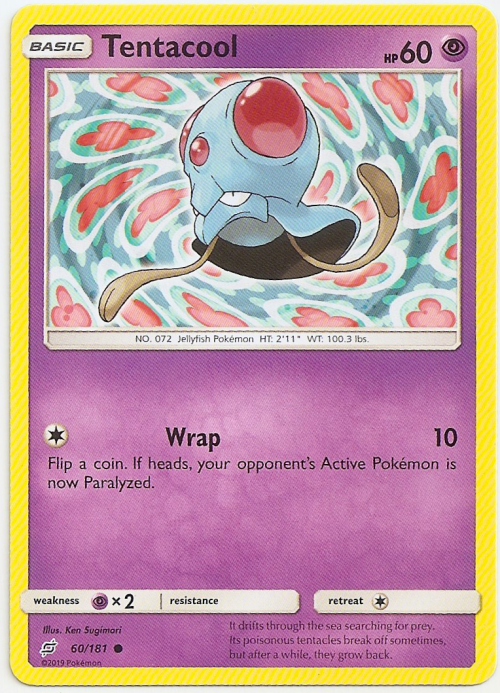 Evolving Abra to Kadabra to Alakazam!

Two more commissions from my ko-fi ! 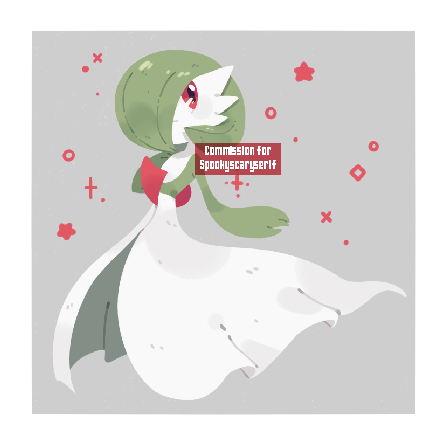 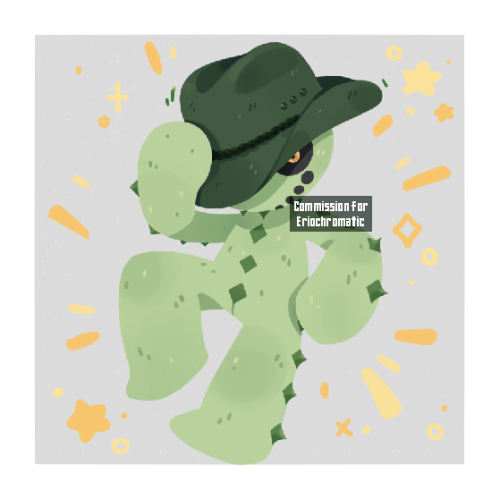 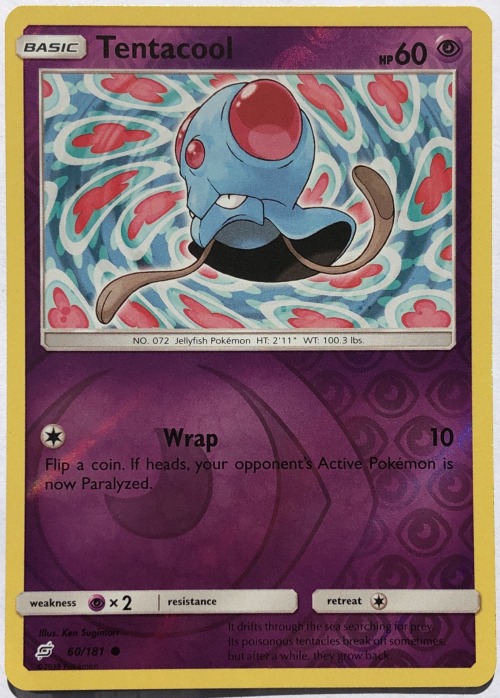 request for @hellolgbtcommunityeee
- with glitter mixing and shiny things!