I have illustrated the first 5 animals of the Chinese Zodiac (Sheng Xiao) for my project. I couldn’t complete all 12 as it was only a short project, but I do plan on completing all 12 after I finish University! 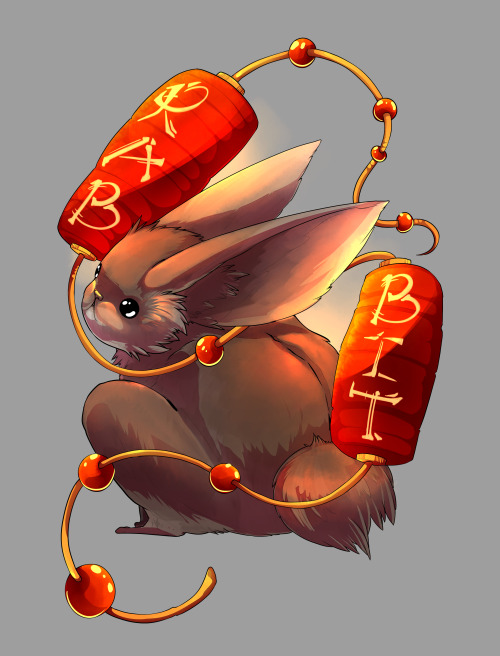 Headcanon: When it comes to children, the person who is cursed by the rabbit zodiac has a higher chance to get twins or triplets. They have more children in general and they love them all. 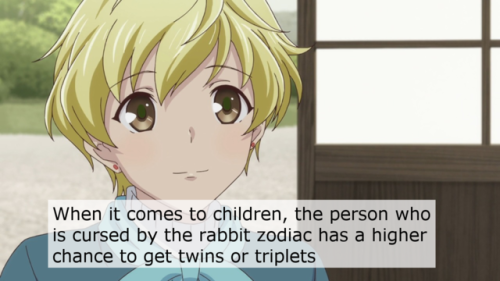 Happy Lunar New Year!
Here’s a piece I did for @fishhling‘s Zodiac Zine!

I gave it as a gift to my mom, who was born on the Year of the Rabbit. I made it while thinking of my mom’s childhood in Taiwan and the stories she told me of playing outside and the rabbits that her family owned.

To anyone else celebrating the new year, I hope you all spend time with loved ones and fill your stomachs with delicious and warm food!! 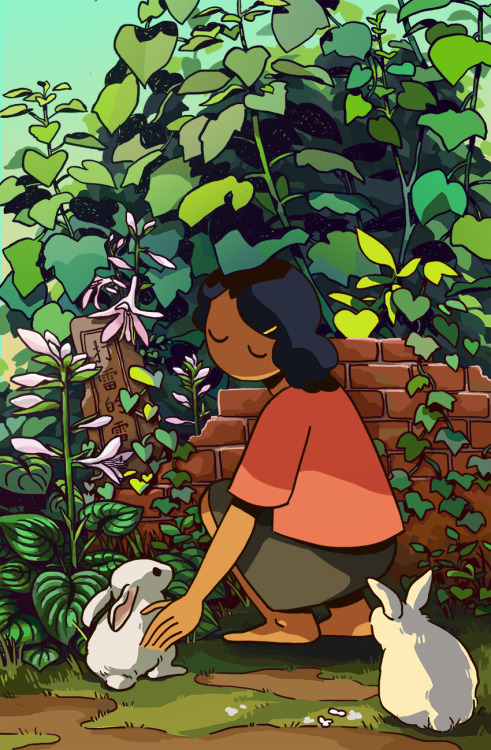 The Sheep (Male & Female) has Life Star/Kua No. of either 3, 6 or 9, whereas the Rabbit’s Kua No. is 1, 4 or 7 (if Male) and 2, 5 or 8 (if Female). It is interesting to note that the Rabbit’s set of Kua numbers are exactly the same as the Horse’s, except that the numbers relate to different year of birth and different elements.

Let us look at which Pair of Kua numbers are most compatible with a mutually beneficial relationship:

❤HO-TU 3/8.
MALE/FEMALE Earth Sheep (1979 Kua#3 Yang Wood) with FEMALE Wood Rabbit (1975 Kua#8 Yang Earth).
This Female Rabbit, despite being 4 years older, has a high possibility of a good relationship as a friend or business partner of either the Male or Female Sheep, especially if the Sheep happens to be the Senior Mentor. A romantic relationship is hard to call, since the commitment-phobic Rabbit, despite being Single at 40, may be put off by the Sheep’s tendency to come on too fast and too strong for her liking.
❤HO-TU 6/1.
FEMALE Metal Sheep (1991 Kua#6 Yang Metal) with Male Metal Rabbit (1963 Kua#1 Yin/Yang Water).
The Senior Male Rabbit is most likely the Father/Mentor of this young Female Sheep and both enjoy a close relationship. As Kua Metal produces Water, this young lady is a great source of pride and joy to Senior Mentor/Dad.
❤Sum-of-Ten 3/7.
MALE/FEMALE Earth Sheep (1979 Kua#3 Yang Wood) with MALE Wood Rabbit (1975 Kua#7 Yin Metal).
As Kua Metal controls Wood, the 40 year old Rabbit, being more arrogant and full of self-pride, is the one calling the shots in any relationship. Despite this, this combination is ideal for both friendship and business partnership, as the Sheep and Rabbit interact well together and should be able to keep the lines of communication open to resolve any problems. The Female Sheep, in particular, is naturally drawn, like most people, to the sociable, sweet-talking Male Rabbit and any romantic pairing could be mutually beneficial as the down-to-earth, straight-talking Sheep would help keep the Rabbit’s over-inflated ego in check.
❤Sum-of-Ten 6/4.
FEMALE Metal Sheep (1991 Kua#6 Yang Metal) with MALE Fire Rabbit (1987 Kua#4 Yin Wood).
As Kua Metal controls Wood, the younger 24 year old Female Sheep may just be the ideal person to guide and nurture the ambitious but impractical Male Rabbit to better things in terms of personal growth, ie, provided the Rabbit is able to side-step from getting pushed around too much by the domineering Sheep. A romantic relationship may work only if the Sheep learns to loosen up and give in to the Rabbit’s gentle but passionate overtures.
***************

On the whole, a Sheep/Rabbit Pairing is mutually beneficial in terms of Kua Compatibility because of the basic affinity and mutual attraction of these two Allies. After the initial hiccups, the clichéd “Happy and Contented” defines the long-term romantic relationship of the Sheep/Rabbit Couple.

The SHEEP/RABBIT Pairing has a rating of 4 hearts ❤ ❤ ❤ ❤ out of 5. Both are Allies and Best Friends and together with the Boar, they belong to the Group of “Diplomats” meaning, they have natural affinity together and their dealings with one another are gentle and considerate, filled with mutual respect and admiration.

The intrinsic (“Earthly Branch”) element of the RABBIT is YIN WOOD while that of the SHEEP is YIN EARTH. Since Wood element controls Earth (according to the 5 Elements Theory), it is obvious that the seemingly gentle Rabbit is the dominant partner in a Sheep/Rabbit relationship. This is rather surprising seeing that the Sheep is generally notorious for being over-bearing and straight-talking. So what are the dynamics at play in this Pairing?

The Rabbit has his/her own subtle, charming and self-effacing ways of touching the heart of the seemingly distant and aloof Sheep. The Rabbit’s patience and persistence, together with good diplomatic and motivational skills, draws out the best out of the Sheep. The fact that they both have almost the same temperament helps a lot too. Hence, it is the Sheep who benefits more from this relationship.

As a Team, this Pair also work well together, understanding each other’s expectations and aptitudes, with the confident Rabbit being the one comforting and giving encouragement to the Sheep. This year of 2015 is particularly beneficial for this Sheep/Rabbit Pair, with the numbers of their respective Zodiac Compass directions making up the lucky Sum-of-Ten combination of 9 and 1 respectively. A web-based business is most suitable for the Rabbit since his/her forte is in seeking out truth and knowledge so who knows, a Sheep/Rabbit business partnership might take off in this area.

Some years ago I drew a similar piece where I merged my Zodiac Sign (Taurus) with my Chinese Zodiac (Rabbit).

Thought it was time for an update. 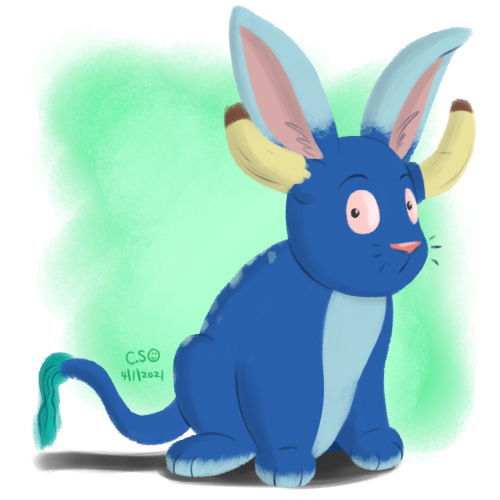 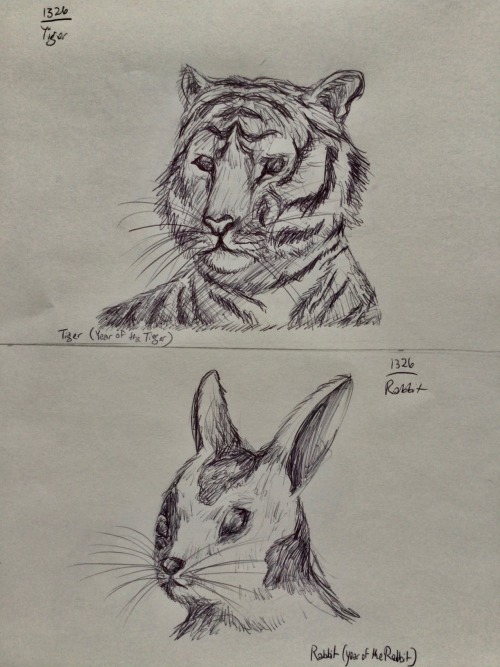 The second Wood element animal, the rabbit. Beyond being adaptable people being born in the year of the rabbit are known for being elegant and in control. They are intelligent people, often quick witted.