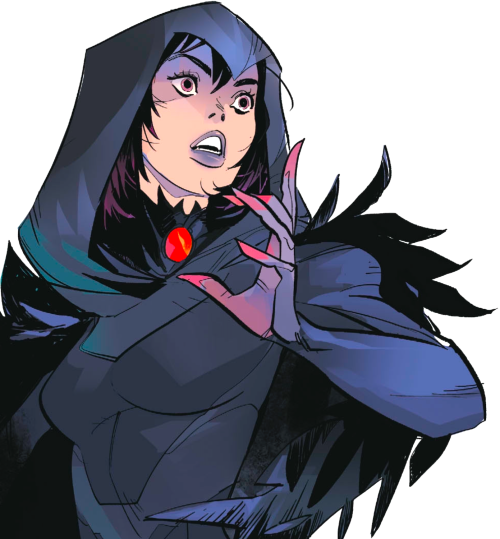 ‘As an empath, I spend my days devouring the emotions of others’

I also love Raven because I’m an empath, too. I mean, don’t imagine the empath as a witch, please. We absorb the energy of others unintentionally, we feel their own sensations, we know what emotions others are feeling. We’re very sensitive. I often understand Raven, and I’m often very afraid of me and who I am - guys, you can’t imagine what it’s like to be an empathetic and not know how to control yourself.

In fact, empaths are often different from each other, but they all absorb the energy of others, normally, unintentionally. Then you learn not to absorb energy, thankfully, but I’m still not capable of it, not quite, at least. I also meditate a lot and spend my days alone reading. Trigon to me is more of an abstract thing than real, but anyway, I thank Raven for existing. It makes me feel less lonely and weird. Every day people think I’m weird.

Imagine Kory flirting with you upon first meeting.

When you entered Dick’s motel room, you weren’t exactly expecting to see anyone but him there - yet, instead of him, there were three others. One was a teen girl, hair so dark blue that it was black, with a look of surprise and fear in her eyes. You’d seen that look before in the eyes of many kids while you worked your … night job with Dick. Another was a teen boy, hair an electric green like grass on steroids, who perked up almost like a startled puppy when he saw you. And then there was the woman. Magenta curls cascaded down to her shoulders, contrasting against the striking green of her vaguely mischievous eyes, and between her looks and her outfit alone, you knew she could catch the attention of everyone just by walking into a room. That, and with heels, she was about six foot, easily. Her purple-painted lips quirked in a slightly amused, cavalier smirk as she surveyed you, standing up in front of the teens in a subtly protective manner, one hand on her hip.

“So, you’re back-up? Dick didn’t tell us he was calling a supermodel.”

requests are open. let me know if you think i should make this into a longer one shot! :)

Ah, those dreaded words. Not the beginning of an argument, though Raven would rather the conversation to be heading that way.

No, those words, and more importantly that tone, meant something utterly inane was about to be proposed. And that nothing but over-the-top reactions would follow.

Gar, being woke up by the titans: jeez can’t a guy sleep-in??

Rachel: we all thought you died

Of course! I’m going to put the outlaws cast/ships here in a mini list since this au does mostly revolve around them, but I’ll have the actual list posed tonight when I have access to my computer. (Note this list does not include ships that happened in the past)

I’m old-school, and like the original NTT personality.  Quiet, somewhat aloof (though caring deeply and growing closer to others over time).  Valuing non-violent means, but not a  pacifist  - wiling to fight for herself and others.  And with a compassion not present in her upbringing.  I personally preferred the earlier stuff before the “I can’t allow myself emotions bit” but that was okay, too.

On the other hand, the Teen Titans animated series personality was very popular, and has indisputably impacted later versions of the character.

I can’t comment on the version on the TT with Damian. I’ve always been annoyed that Gar and Raven weren’t allowed to grow up, but this was more. My brain simply would not compute Dick’s peers on Damian’s teen team, regardless of age compression. So I’ve read like two issues of that.

Starfire Icons (with a bonus Raven) from Teen Titans Go! #15

“Todd, put my son down, right now.” Damian in his controlled voice as he recite his warning to his brother.

Jason turn his head toward the father of his nephew with both of his eyebrows knitted together. With the feeling that he shouldn’t get accused of doing something wrong, he open his mouth and in controlled voice he whispers to his brother. “ Look, D. Where were you just now? Raynor has been crying since you decided to disappear in front of us.”

“I went to the bathroom, for God sake.” Damian narrowed his eyes as he walked towards both of them.

Raynor patted on Jason’s hands and pointed at the screen. Jason with a long sighed he lift him up toward the cctv where the screen shown Raynor chubby face with his big ol’ heterochromia color eyes of green and violet.

“Are you kidding me?!” Damian arched a brow as he seen what happen.

“Don’t look at me like that, it’s your son. He wanted to see himself on the screen.” Jason sneered at him. “ It’s good enough that he’s not crying all day.”

i’m still a sucker for the bombshell designs 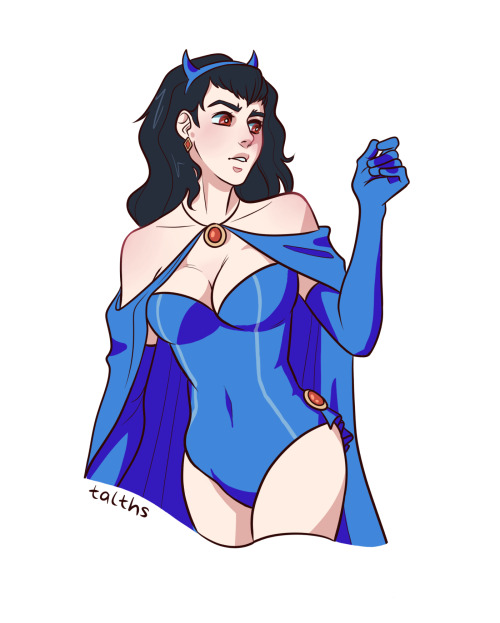 Sofia would do such a fantastic job playing Raven. She has a very engaging presence on screen and that would translate really well to Raven’s character. I can see getting at (what I think is) the essence of her character. When you first get to know her, she is not the easiest to get along with (mean, dangerous, closed-off). She comes across as very confident and prideful. But once you peel back the layers, you see a more vulnerable person who is driven by her desire to protect and care. Someone who wants to be with other people and doesn’t like being isolated, but has no idea how to even go about approaching others. I just think Sofia would really nail the many contradictions of Raven and she would just knock it out of the goddamn park. Also she would bring something new to the character and even a bit of fresh air.

Camila would be great as Raven. I think she could really nail the confident and severe side of Raven, as well as the more vulnerable sides to her. She could really pull off the witchy and occult vibe needed for Raven; but more importantly, even when she has a minor role, like in Palm Springs, she grabs my attention – and that’s a much-needed quality for any actress who would play Raven.

Dove would make for a great Raven. She’s an actress who can hold the audience’s attention and I think can easily play a character who has many layers and sides to them. Also, I love that smirky, smile of hers, it just screams Raven to me. I don’t have much more to say, other than, she looks great with purple hair.

I have not seen Amber in anything, but the second I saw her she shot to the top of my list. This is solely based on looks alone and usually that wouldn’t be such a huge factor, but she looks like Raven. The second I saw her I thought “Raven!” I just really want to see her play Raven. Overall, she looks like she could be a very good mix of OG Raven and the more gothic Raven from the 2000s and onward.

I haven’t seen her in a whole lot, but from what I’ve seen, Isabelle can definitely do Raven justice. I think she can easily play the eerie, creepy and intense parts of Raven’s character no problem. And I don’t have any reason to believe she wouldn’t be able to nail the softer sides to Raven as well.

While Adeline’s role in The Chilling Adventures of Sabrina is rather minor, from what I’ve seen I think she could be an amazing Raven. She has a very dynamic and engaging face. I simply kept coming back to her photos and she stayed at the top of my mind while I was looking at other actresses. I really think she would just nail the mysterious, alluring, and even dangerous aura of Raven. Also, she’s got the creepy witch aspect down pact.

I think Teagan is a very good actress. Is her Raven my favorite Raven of all time? No. But that’s not because of her. She does a great job in Titans and I think she could do an even better job, if the show itself wasn’t such a mess. I love Raven’s season two look. Overall, she does a great job of portraying this young, emotional and vulnerable Raven and her scenes (especially with Ryan and Anna) are some of my favorite.

While she is very pretty, Anya can easily (very easily) have a creepy look and atmosphere about her and if that’s not Raven, then I don’t know what is. I think she can definitely play the many facets of Raven, while never letting us forget that Raven is otherworldly.

I just think Naomi could do a really good job as Raven because she is such a talented actress. I don’t know, there is just something about Naomi playing Raven that intrigues me.

Is Elizabeth on my list because of Jade West from Victorious? Absolutely. 100% yes. Overall, Liz really has nailed down playing the mean, sarcastic character who you can’t help but like and enjoy – and I think that talent is very applicable to Raven.

Hey, so, you guys remember that brief stint in the 80s where Raven was lowkey drawn in Indian clothing, right? No? Well I’m bringing it back 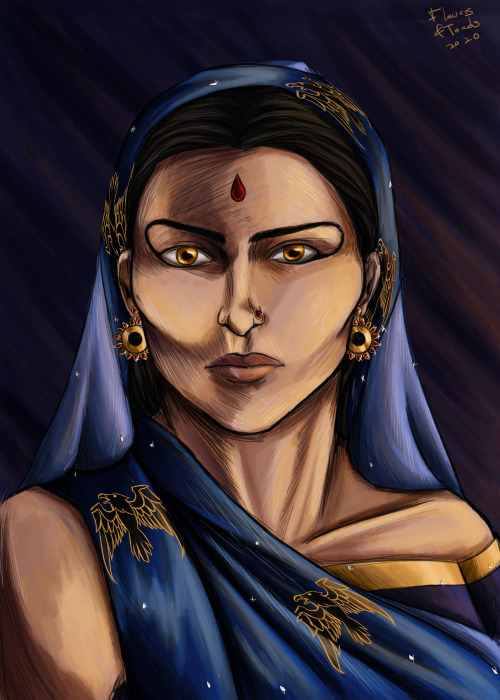 I don’t want to insult, I just want to clarify

okay guys, I’m a bbrae shipper. but that doesn’t mean I hate all the other ships. I respect them, except for their own toxic ones. I love Jinx and Raven. Or Raven and Starfire. or Cyborg and Bumblebee, etc.

Many Robstar and Bbrae shippers absolutely hate Robrae. but they’re so cute! And it’s not a toxic ship. I understand it might bother you - but stop insulting their fans. I’ll soon post about Robin and Raven, which I see more as best friends, but I have to say that sometimes I thought they were engaged, I admit. And yet I’m a bbrae shipper! Guys, the more insults other ships get, the more toxic they become, even if they weren’t actually. You may not like abusive or toxic ships, like Harley and Joker, or Terra and Beast boy (yes, they’re toxic. In the comics, well, let’s not talk about it, in the cartoon, Terra just wanted to save Beast boy. wanted to keep him like a pet - in fact she went out with him for it. Beast boy loved her sincerely, but Terra just wanted to be loved by someone).

now, however, returning to us, do not spoil the Robrae. Really, they don’t deserve it. Well, and of course, Robrae shippers don’t have to insulate us.

The picture I put in represents the situation: bbrae on the left, robstar on the right, and in the center robrae. please leave the other ships alone. Let’s stop destroying. Look, Robin, it’s like ‘sorry, what do you care if I’m a robrae shipper or something? Until the ship’s toxic, it’s okay. Do your own business’.

well, let’s take an example from them

reblog if u save