Storm and Red Hulk get zapped by the tiny Wasp-Men who work for H.A.M.M.E.R. 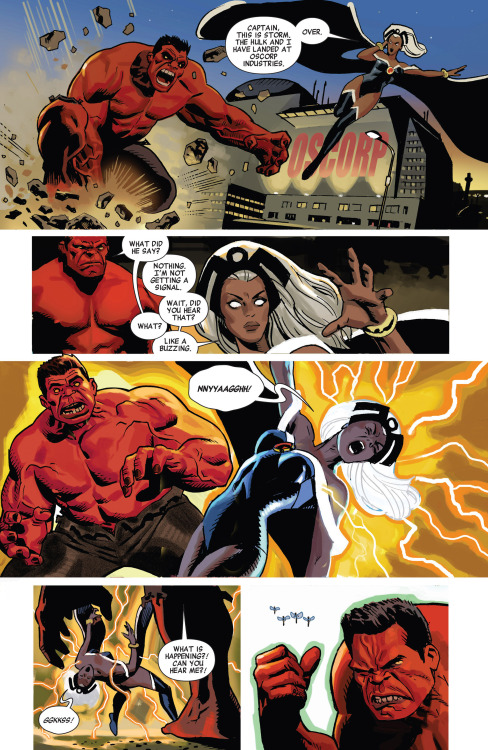 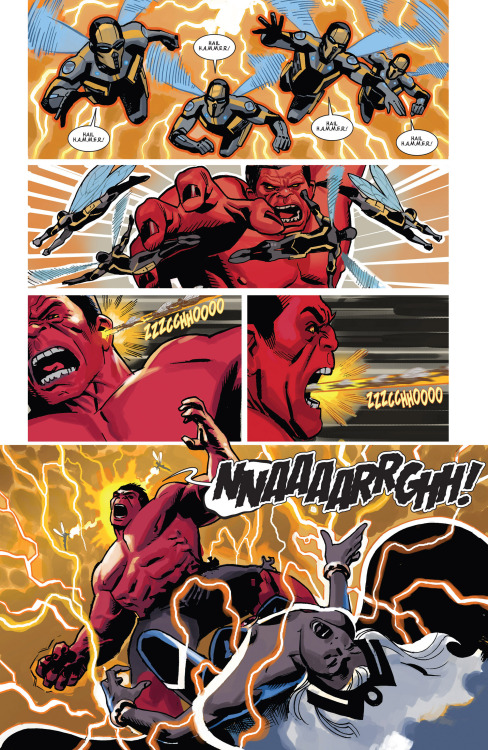 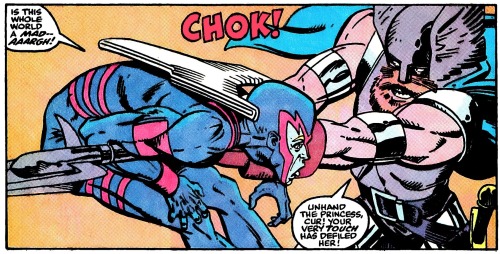 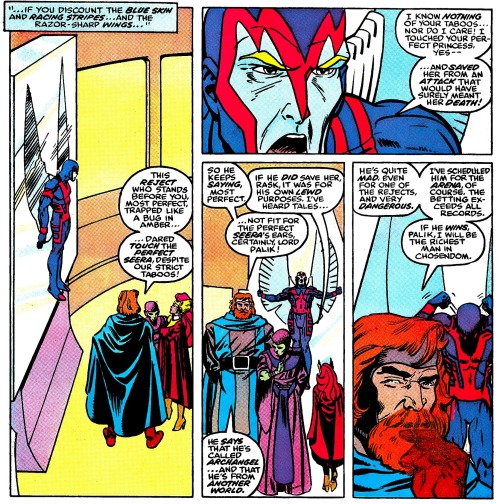 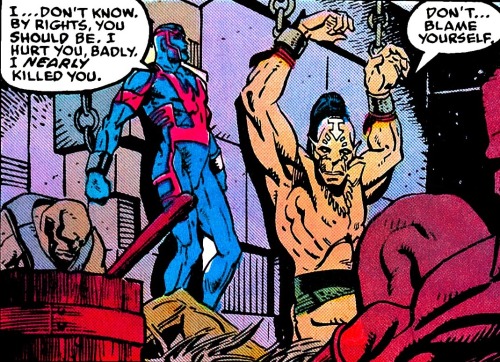 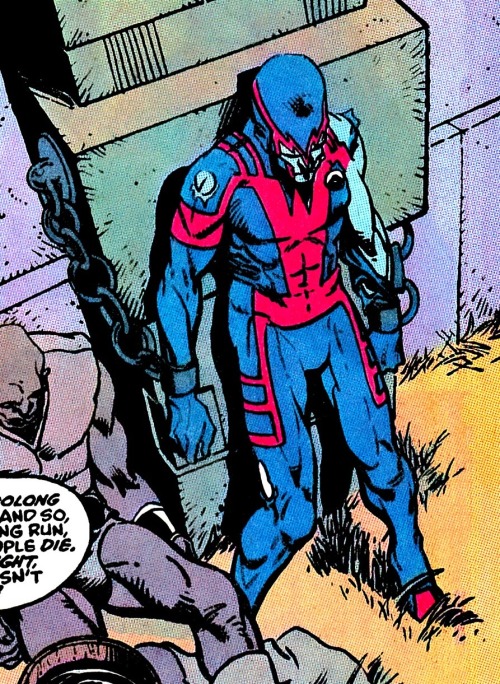 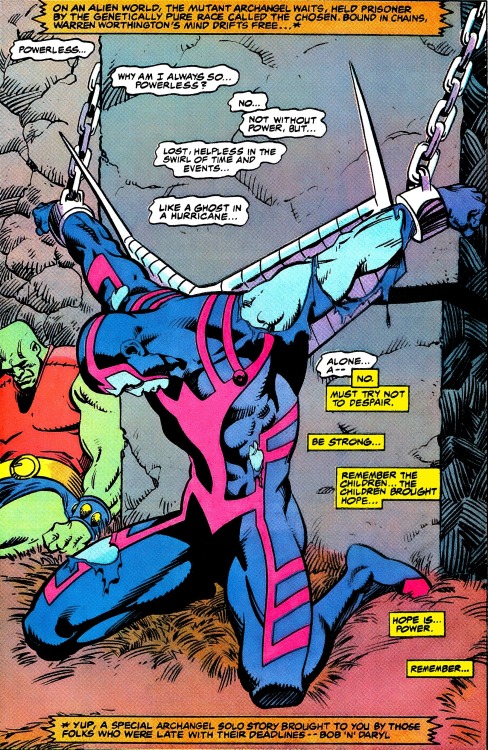 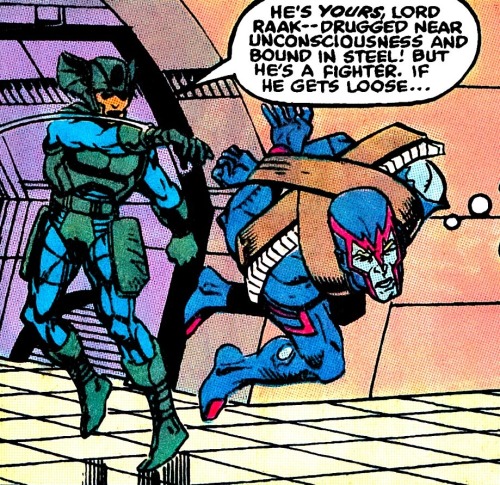 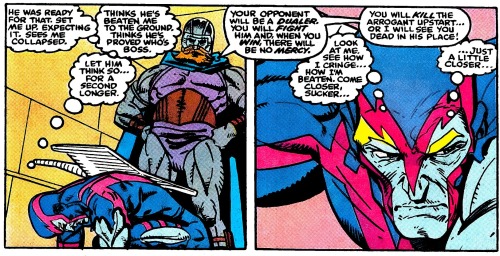 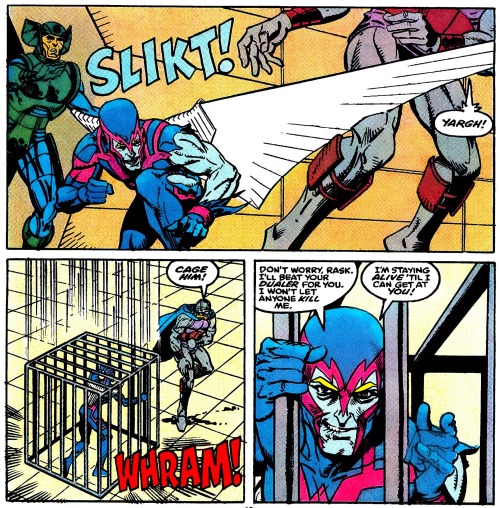 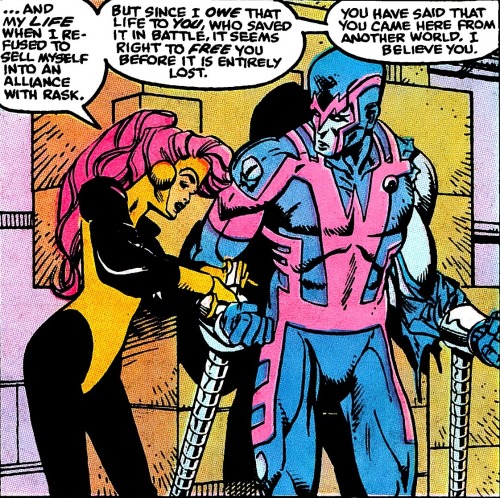 Wolverine gets caught by the Brothers Grimm 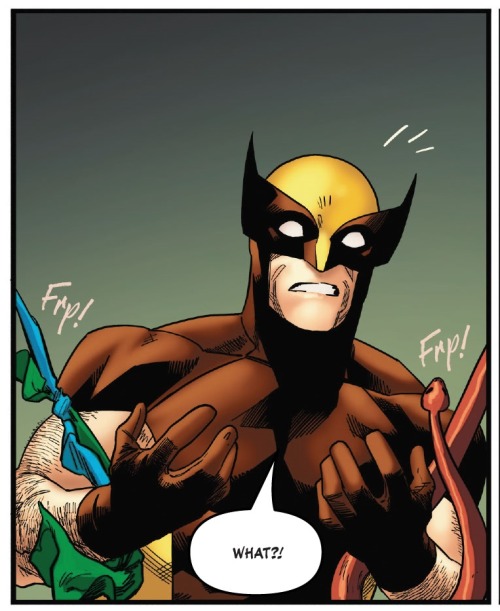 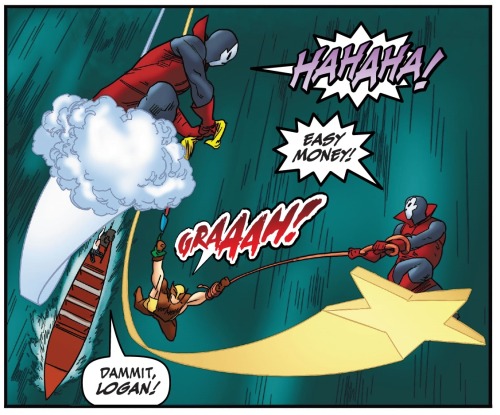 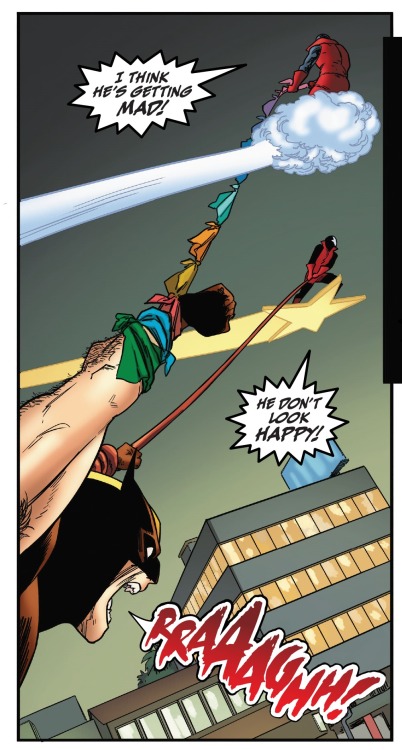 Spider-Man is captured by a random bad guy and his minions - Hammer and Anvil. 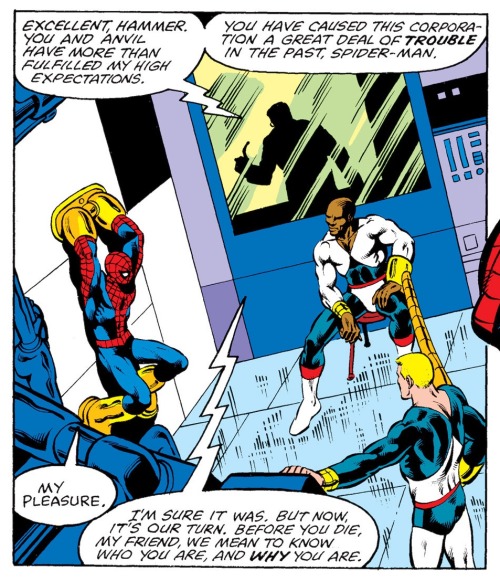 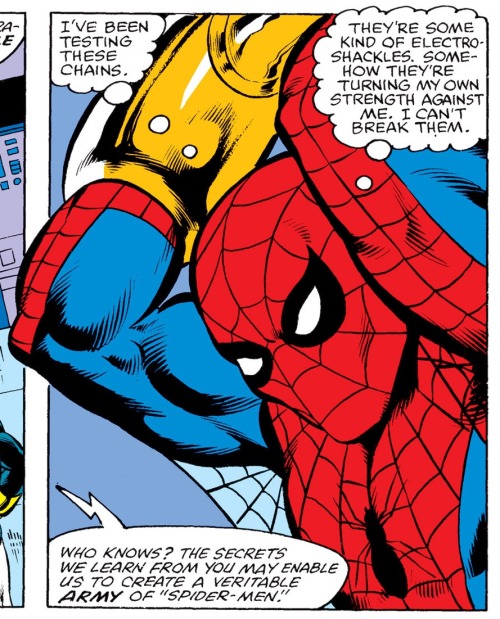 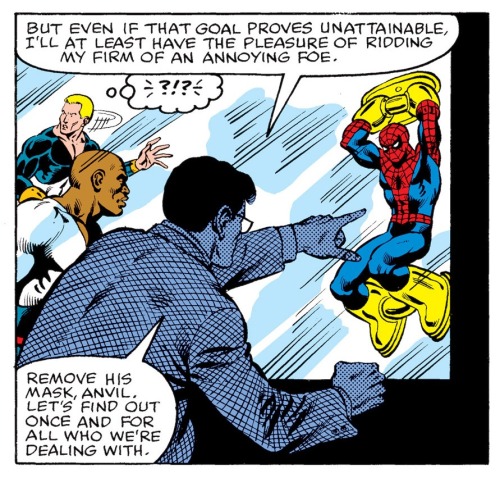 She was sat there, holding onto an half of brought sandwiches, ready to learn why, to be here, was needed.

At the very least, she was a tame villainess, not some big shot or very known for that matter. She didn’t mind assisting certain heroes, if its all for the safety of civilians.

‘‘And you need my help for?’‘, with all she has done, out of public eyes, Chiba has been quite peaceful, so being away from this particular prefecture, was not an issue to her.

Defending a criminal, lightly wounded & burnt at this point, how very heroic, however, she had no intention to accept someone getting in the way of things.

‘‘Come on now’‘, she smile, eyelids close to add this genuine feeling and hide the malice beneath.

‘‘I don’t need help to take care of the criminal’‘, as in kill but that didn’t need to be known.

#greenrabbitdeku, #it me from Dynamitem, #please accept this random starter, #ic, #Villain!Suzu, #v: Drowned in roses and ashes
0 notes · See All
n-ella-hText

Ok Nvmnd bout this Christmas post it took me 4 months. Lol but anyway. I haven’t seen a lot of people do this so might do. Some hairstyles of my two favourites <3. I hope you’re doing great during this epidemic! I know you heard this everywhere but…

And yes physical art. Why? Cuz I suck at digital colouring :P. Sketches are the best stress relievers in my opinion. Anyway have a great day/afternoon/night idk what time for u.

“Come over here and make me.”

Took me for ever because much as I love these two, they have a voice that doesn’t come to me easily. Many excuses if this is wildly ooc… as I fear it must be… orz

Liu Qingge might have considered murdering Shen Qingqiu if it hadn’t been clear that the man did not need any help getting himself killed. He couldn’t go two days without being attacked by demons, or fall into a monsters’ nest, or be hit by a curse or. In at least one occurence, all three had happened at once.

Not that Liu Qingge cared. The man had chosen to have rotten luck when he had decided to continue associating with Luo Binghe. Everything that had happened since then, Shen Qingqiu had earned. Besides, that same Luo Binghe always managed to swoop in at exactly the right moment to save his teacher and husband from the latest deadly peril he had fallen into.

Still, when Yue Qingyuan had heavily hinted around him that it might be good to have someone keep an eye on their fellow Peak Lord whenever his annoying husband had to leave him behind and deal with demonic business, Liu Qingge had not hesitated. Someone had to make sure that Shen Qingqiu stayed alive, and that someone wasn’t going to be Shen Qingqiu himself.

Who else but that aloof Peak Lord would have so carelessly drunk tea brought to him by someone who looked so little like the other staff of the inn they were staying at? For a man who could go on endless rants about monsters and poisons and how stupid the people falling for them… he sure was the first to make that sort of mistakes.

Of course the would-be poisoner was long gone by the time they realised something was wrong although, just from the odd aftertaste in the tea, Shen Qingqiu was able to determine not only what poison was used, but also who had used it. Luo Binghe had many enemies, and they had all figured out that his main weakness was his husband. Shen Qingqiu was, on the whole, more annoyed than concerned by that state of affair.

“It will make this Shixiong feverish for a few hours,” he complained to Liu Qingge as he was dragged to his room. “On a demon it would be fatal. It seems that killer was wrongly informed about my nature.”

#self care, #shit post, #stupid, #who am i thinking about, #me, #fuck everyone else, #random, #neato, #text post, #villain
1 notes · See All
lumilasiText

You know it’s kinda funny to me, when one of my favorite characters does something badass/awesome in the manga, there’s all these thirst posts and tags I see from a lot of other people (which is totally fine btw, you do you and have fun!) and I’m just sitting here going;

and then there’s AFO where I’m like “….You’re a fascinating evil force of nature. But also a bitch. I mean I enjoy your character within the frame of the role you have, but you’re still an awful bitch and please drop dead”

#I've just never really been one for character thirst, #random musings, #bnha, #also Afo is admittedly becoming one of my favorites too, #purely because I've always enjoyed pure bastard villains with mystery surrounding them, #though you also do want to throw them off a cliff, #As you should with all the evil they usually contain
16 notes · See All
just-a-fucking-camcorderText
#art, #my oc art, #artists on tumblr, #fan art, #my ocs, #oc art, #random art, #villain
4 notes · See All
locuas642Text

Or do you feel like explaining why they had to do it, how they had no choice at all or to somehow separate them entirely from those actions and/or group?

I believe you don’t condone their actions. But do you accept the character, out of their own choice, decided to do bad things to other people?

THEY   WERE   OVERWHELMED   ,   EXHAUSTED   ,   RUNNING   ON   FUMES   . shouto had warmed and cooled his body to the point where he was shaking, and his skin felt like rubber ; it couldn’t decide what temperature it wanted to be anymore. and still, they had to ENDURE, to fight on, because it was just them. no one was coming to save them, to his knowledge. his faith in midoriya was UNWAVERING, and midoriya’s faith that the heroes would always WIN gave him the strength he needed to keep going. whatever the cost.

midoriya looked worse for wear than him. the battle on whatever villain they were up against had not been KIND to him, and shouto’s heart thumped loudly in his ears. stay calm, he instructed to himself, focus. the villain’s quirk appeared to be able to summon any weapon of his choice and direct them through whistling, and shouto sensed a knife coming for him from behind. he side stepped it just before it could EMBED itself into his back.

It wasn’t hard to let your mind drift away in these sorts of situations, in fact, by this point, it was pretty much automatic. And though you knew it wasn’t a particularly good thing, nor a particularly healthy thing, it was helpful when it came to dealing with stuff like this. Especially since it allowed you to separate yourself from any amount of panic or fear you would otherwise be feeling.

To the villain before you right now, you almost seemed disinterested.

Somehow this behaviour always managed to unsettle whoever it was directed towards or whoever was unfortunate enough to witness it, and despite any amount of anger or hostility they held towards you, your bored and detached demeanour, always managed to leave them feeling off kilter and somewhat unnerved. Something that tended to show rather heavily in their performance, no matter how skilled they usually were.

Luckily, it generally offered you quite an advantage when it came to fighting or dealing with these people, thanks in part to how much it unsettled them, but also thanks in part to your ability to remain coldly calm whilst handling the situation.

Because when you smiled…. even the hardiest of souls was left with chills racing down their spine.

#write-it-motherfuckers, #writing prompt, #writing prompts, #writing, #prompt, #story prompt, #story prompts, #story, #prompts, #my prompt, #original, #random, #inspiration, #imagine, #story time motherfucker, #drama, #dramatic, #angst, #villain, #hero, #disassociation, #heroes and villains, #bnha, #mha, #creepy, #if you fuck with their heads you'll fuck with their skills, #writing this prompt is making me want to go hunting down similar bnha fics, #because I know there has to be SOME thanks to how many people have mentioned, #reading stuff like that in the past, #I need me some links! I love that shit
150 notes · See All
kitucanText

hm *gets emo abt ludo lagneía*

#kit.txt, #HOW DID HE END UP BEING WHAT HE IS NOW.......HE WASNT INTENDED TO BE A PROTAGONIST AT FIRST, #he was literally so underdeveloped when i first made him.., #i gave him a random trait like 'oh what if he had a secret identity as a killer or something', #bc he was originally intended to be a villain, #and that. that trait somehow caused him to become a protagonist, #and somehow go from one of my least developed to one of my most developed, #AND like my 2nd or 3rd fave oc out of somewhere around 90........, #i love him SO much my problem boy! hes a boy who causes problems and he makes me emo, #im genuinely really proud of myself for writing him hghjhgfdghj......, #but yeah he was initially just a minor villain in my original ideas!, #and now he is a main protagonist.............. Development
4 notes · See All
aleksiskaidanovskyText

all i know in this pokemon pacrim au im making is newton is a fairy/poison type, hermann is a steel/electric type,mako is fighting/fairy,raleigh is ground/rock, stacker is dragon, herc is fighting and tendo is electric

#literally so excited to start making their teams!!!, #stacker and herc are gym leaders, #newt and hermann are professors, #raleigh mako and chuck are trainers, #and tendo is that random scientist who pops up constantly and gives you weird shit, #hannibal chau is a villain and a dark/bug type, #pacific rim, #pokemon, #mumblings
12 notes · See All
Next Page