Lmao exactly 😂. I have no idea how they were expecting to feed Eren to anyone anyways. They can’t even threaten to injure him because then he can transform. And given how he was popping shifter lines during the confrontation with Hanji, I’m not sure he even needed the blood draw requirement anymore (unless he did cut himself beforehand??).

rant about stupid shit going on at twitter, among other places, and what happened to various artists recently.

I literally had lunch an hour ago. Why am I hungry again? Does my metabolism not realise how time consuming it is to cook?

Yeah I agree. It is very contrived. I can see why it was necessary (to the plot and themes of the story) but I think Isayama could have better executed it by creating more division between the 104th instead of having everyone who’s not Eren be conveniently on the same side.

And there should have still been more sympathy towards Eren/his cause I feel. Like, the 104th literally don’t give a shit about Paradis anymore and that’s a pretty weird development.

so for a while ive been working towards transitioning, and ive heard horror stories about wait times and the like, but for the most part everything has gone smoothly. talked to my doctor, got in touch with a counselor, got a letter of recommendation, all roughly within two weeks.

today i called the center i was recommended to for HRT… aaand its a 2 month wait PLUS no list you can be put on… “we dont have a waiting list; youll need to call back periodically to see if we have openings”

#personal#rant#trans#trans issues#probably delete this later#just needed to get this shit down in words cuz it seems a little ridiculous...
1 notes
kixforbreakfast
Text

but when some people recommend to get better, you HAVE to listen to happy and positive music or think happy or positive thoughts is the least useful advice, at least for me, that ive ever received due to the idea that if you just act happy, the depression with go away. i wish that’s how it worked.

some people jsut need to let out emotions and pain, and if that means listening to sad and depressive music, then let them be.

If you support jay whhhyyyy pee, then I have no use for you. Other companies have released statements regarding the false accusations of their idols. Why can’t that pompous idiot do the same thing? Instead, he threw Hyunjin under the bus and promised to be more diligent when picking trainees in the future. That man is a despicable human being. He deserves for Karma to come back and nail his coffin shit with him in it alive. I have no respect for him whatsoever. None. I love both Han and Hyunjin to death, they deserve way better treatment. They both apologized for their actions.

Omg I’m in a training for work and I feel like I’m back in high school. Half of the people in class are not paying attention to the point where the trainer has to repeat themselves. And there is this one guy that I’ve had training with before who is just so fucking annoying. He’s in his late 50s and just doesn’t use critical thinking or active listening. Like bro! Think about what you’re saying before you say it. You are literally answering your own question when you ask it!

its time to say it.

im too sensitive, i dont know how to harden up and even though sometimes i make vile jokes i cant take the jokes of others and im not an overall a very sturdy person, i need to get over my insecurities and understand that nobody fucking cares because im a goddamned snowflake. i cant accept changes and flaws and tend to shy away from them instead of embracing defeat and being all happy all the time. i dont know how to confront people about what they do, and when i do i start to overthink and be dramatic. i know that just because someone is right doesnt mean theyre invalidating, im just being sissy thats incapable of telling to myself directly that im wrong. i have to learn to admit to what ive done and improve because were all humans and we all make mistakes, and with those mistakes we improve

im not going to get anywhere by constantly thinking im right, im not gonna improve by just hoping. i have to look forward to doing good in this country if i truly want it to change, this shitty hellhole isnt in the best condition and it may never get better but it takes years to heal from wounds left by some people. if i want to go anywhere ill have to push myself into uncomfortable situations and tell myself to harden up a bit and ram myself through the pain.

for legal (and moral) reasons, the following is all meant to be taken as a joke.

happy first day of spring you miserable fuck. it’s been….alright these few weeks. when was my last post? early february? yeah. no major events (aside from spotify launching in my country, woo!) but i’ve been feeling…fine, surprisingly. it’s more i wanna kill someone else instead of myself.

lord the urge to murder someone is strong, especially right now, standing in the metro surrounded by a crowd of morons that don’t understand there’s a deadly virus circulating. how much more clear do they have to make it? this thing kills you. kills you dead. cuts your lifespan straight in half. i’m not going to tell them to wear a mask. no, i hope they all die slow, painful deaths. i hope all of them rot. there’s one in front me now. an idiotic look in his eyes and a clean slate of a face that’s basically a glass shell into his silk-smooth brain. what i’d give to just stab this man dead in the middle of the metro right now. maybe id carve his jaw apart. crack it into a horrifying, gory, open state. like the episode of hannibal. do you think he’d resist? cling on to his miserable life like it means anything? id love to make him feel it. id love to stare into his fear-filled eyes and watch them go blank. id love to know he could feel me ripping his face clean into two. maybe id break his legs. maybe id just kick him down the tracks and be done with it.

everyone outside yelling in the square right now is a moronic piece of shit. no self respecting person would go out into the main square of a city in a global pandemic and squeal about things that cant be changed. do you think hes gonna quit? say he does, what comes next? we elect another moron and overthrow him two years later? id rather shove a gun down my throat. id rather shove a gun down all their throats. is threats of mass homicide against tumblr policy?

theres a man on the escalator parallel to mine. i could beat him to death. a good hit to the right part of his skull and he’s gone. do you think anyone would think of him? do you think his darling mother would mourn her manchild? her failure of a son that never achieved anything? no one who achieved anything worth mentioning is stupid enough to go out without protection during a pandemic. at least for the sake of appearances, put the damn thing on. i dont care if you cant breathe. its a small city, everything’s a fifteen minute ride away. if fifteen minutes with a piece of tissue over your ugly mug seems like torture, dont go out. don’t leave the house. adapt or die. natural selection. how many more expressions does it take to get it through your thick skull that the mask isn’t uncomfortable, its just youre weak? its just youre a measly little mama’s boy thats never shut up and complied once in his miserable life? if you werent mentally weak you wouldn’t be out watching the minister make a fool of himself. but i guess the circus is having a public show today. come one, come all, is it? god i wish i could choke that fucker out. maybe id leave him bleeding in an alley within an inch of his life. maybe id finish the job and publicly hang him. make a show out of it. paint him in the blazing colors of the tricolor and put him in the high seat of the ministry. where is your god now?

its quiet in this street. im the sole person on this side of it. maybe some unsuspecting idiot could come down and never make it to the other side of the sidewalk. this feels like a good street to stab a man to death. id never hurt a woman, no, but the sheer thought of cisgender men disgusts me. im simply above them all. im just a more advanced human being. do cisgender men qualify as human beings? i dont think they should. i dont think cisgender men should qualify for anything except a laughingstock.

this is so ridiculous its almost funny. ive been considering it/its pronouns.

There are two laws when it comes to my sweet boy.

1: He loves the slide. Like, no, he LOVES the slide. Come rain, snow, hurricane, or nuclear fallout he will ask you to take him to the slide. If given the choice, I’m pretty sure he’d live on the slide. Just throw him some buttered toast and his water bottle every once in a while and call it good! 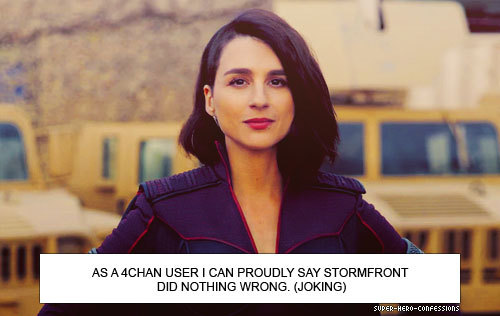 So about Identity V

I love the new hunter’s design. I hate how people on instagram are complaining about it.

My favorite thing about Identity V is how the characters are different from each other. I love how we have cute characters and serious ones, and sexy ones too! I won’t even talk about their vintage design because I’m gonna be here forever. And I love how varied they are, and how their ages are different and how we have disabled characters and how their backgrounds are. (Story wise, my favorite thing about this game is how everyone is miserable and hurt, and how real it feels when we read their stories).

I started playing this game in 2018, just as Seer was being released. And I never stopped playing since. I feel the community was alrighty before they started releasing all the pretty boys. And don’t get me wrong, I love them. I’m a hunter main and they all give me hell ingame but I love them. The only character I don’t love is Percy. sorry.

I hope they keep coming with new creative characters. Just we do have enough pretty boys so maybe something different. And of course new sad hunters too so I can suffer with them.

Edit: it just came to my mind that we need a muscular girl in this game. Hunter or survivor.

I love the selection at Medici TV, but I hate literally everything about the website. First of all, this thumbnail on the search results page tells me nothing. Second, once I click to go look at the details, like who the fuck is singing, the site adds it to my history as watched. Third, I started this and it’s Don Carlos not Don Carlo. Figure it out Medici TV. I’m paying you fucking money.

i would love 2 nap, but I think my nightmare marathon last night was plentiful enough, so I guess I will just be sleepy all day.

I am SO tired of Quantic Dreams pretending that their violent, abusive characters who make no effort to better themself in canon deserve to be forgiven and celebrated . It’s just not okay

OX really deserves to rest and pace the story however they want, but like, I’m honestly dying for another (plot) update