“I am the First Son of the United States, and I’m bisexual. History will remember us”

If we confess our sins, He is faithful and just to forgive us our sins and to cleanse us from all unrighteousness. (1 John 1:9)

The mandate of forgiveness is so central to our faith, that to ignore it is to ignore our very salvation.

i mean, i love reading classics i really do. but as someone who has no idea how different english accents/dialects sound like, this is absolute gibberish to me.

25.02.2021 - the break has extended! I’m having a great time doing f*ck all and it’s doing my mental health and anxiety some good! Honestly, the stress of studying during a pandemic is unreal and I’m so glad I went part time, especially with my caring commitments.

However, today has seen true chaos with fake ivy - safe to say it has gone EVERYWHERE, my room looks slightly mad (headboard, floor lamp, bookcases, wardrobe, and TV are all covered but I’m not sharing everything…) I’m missing the outdoors so I’m bringing the “outdoors” to me with fake ivy, flower garlands, and silk flowers. I would have gone with real plants but I’m dreadful with hay-fever and a dreadful plant-mum. This was safer. It’s a mess but it’s cheered me up for now, which is the important thing!

Otherwise, I’ve had a quiet day doing my embroidery and reading. It’s been nice and relaxing, so now I’m in a better head space I’ll probably do a morning of work tomorrow. I also have a quiz to write for tomorrow night because I’m hosting the early modernist quiz night, so lots to do!

I finished my book! How long did that take me? Way too long. In my defense I did go to Florida for a week. Plus I didn’t know if I was gonna like it or not. Anyway yeah

It was really good! And now I’m on the second book. Or we’ll technically it’s the first one because I just read the prequel. And thank goodness I did because I woulda been so confused if I hadn’t.

The guy I didn’t really like died. Which was kinda sad cause I grew to like him a teensy bit. But not really devastating you know. It had to happen. Then the mc went on a murder rampage and ooh I was here for it!!

Reading books about assassins makes me wanna kill somebody!!

But I would like to learn how. Like maybe some knife throwing. Or archery. I wanna be able to ride a horse and hit a target in a Merida-esque style. With like a princess dress on.

Ima make a moodboard for my fantasy life. Watch out for it my doods

The State of Us by Shaun David Hutchinson (YA F HUT)

You Say It First by Katie Cotugno (YA F COT)

Jane Against the World: Roe v. Wade and the Fight for Reproductive Rights by Karen Blumenthal (YA 362.198 BLU)

History vs. Women: The Defiant Lives that they Don’t Want You to Know by Anita Sarkeesian (YA 305.42 SAR)

A Pirate’s Life for She: Swashbuckling Women Through the Ages by Laura Sook Duncombe (YA 910.45 DUN) 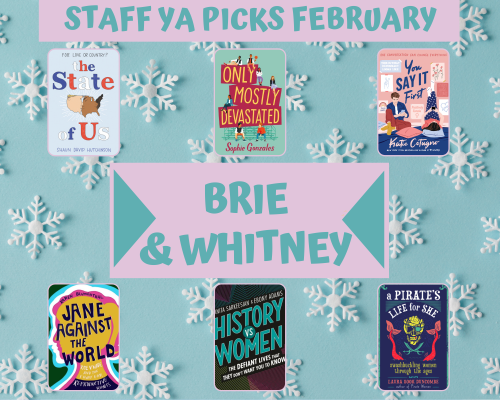 Dedication of the day

Today’s dedication comes from The Bridge by Bill Konigsberg.

This one is tough. I really hope there are not many people here who have felt like this. If there are any please know you are loved ❤️

What do you think of today’s dedication?

Check out more dedications in the tag #dedicationoftheday 🤗

It’s such a classic movie that I can’t remember not watching it. I’ve also figured out the recipe for CREME DE LA CREME DE LA EDGAR! 😂 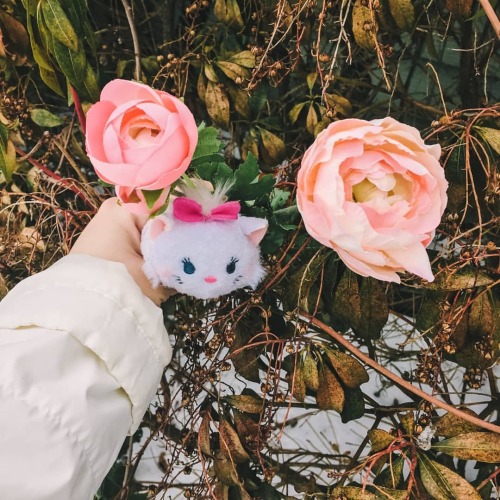 Since like most MCU fans I’m currently watching WandaVision, I also decided to reread Brian Michael Bendis‘s House of M

WARNING, spoilers ahead for both the 80’s west coast avengers series and Avengers disassembled.

I said it the first time I read this comic and I’ll say it again now, the House of M series is one of the best Marvel comics that I have read. Dealing largely with the aftermath and consequences of Avengers Disassembled and spanning over two parts, it focuses on the mental state of The Scarlet witch and her reality warping reaction to both dealing with the loss of children she manifested and the deaths of her fellow avengers. In a drastic measure to avoid her execution, Wanda, Pietro and Magneto alter reality, creating a new world where mutants are the majority and Magneto is the ruler.

It seems poor Wanda just can’t catch a break in the Marvel comics, the events of her entire arc are enough to send anyone insane, let alone someone who struggles to control her powers. Rather like Lena Luthor from the televised Supergirl series, The Scarlet Witch is neither a villain nor a hero and I think that’s why I like her so much. You just never know what she is going to do next. On a whole The Scarlet Witch has got to be one of the most complex and layered characters in the Marvel universe. Her arc is sometimes contradictory, but always interesting.

I love a good reality altering story, Bendis has penned a gripping, high stakes plot with some great world building. The new reality and its iconic characters feel very familiar and yet give a fresh and new dynamic at the same time. The standout moment of the whole series, and probably what it’s most famous for, has to be its cliffhanger ending, but I won’t say anything more on that other than I really hope that concept is what the MCU is heading towards. 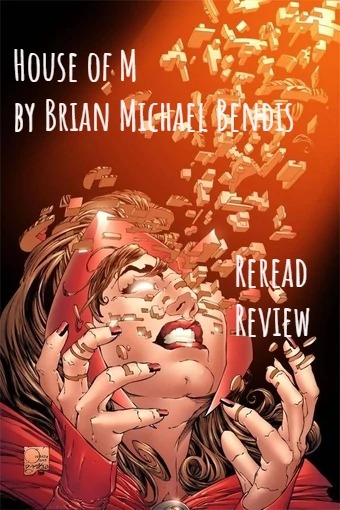 A series of unexplained and extreme events lead to disaster and devastation for the avengers. Meanwhile having remembered her past, Wanda struggles to deal with the loss of her husband and children.

Avengers Disassembled is a fast paced and action packed story which spans over one very unfortunate day for the Avengers. To quote spiderman “With great power comes great responsibility”. This comic definitely explores and showcases that concept, as many of the films in the MCU have.

Brian Michael Bendis shows a real grasp on the characters we know and love here and really showcases each unique ability and personality. However since I haven’t read the backstory of every single Marvel character as a Marvel fan I’m ashamed to say that there were a couple of less known characters that I couldn’t immediately identify. I would therefore say that this probably isn’t a comic you want to read when first getting into the Marvel Universe.

Much like in house of M the artwork is on point, penciled this time by David Finch with some rather dark but still striking inks by Danny Miki. That image with The vision’s almost zombified melting face is wonderfully creepy and particularly well drawn.

‘Avengers Disassembled’ also continues the complex story arc of The Scarlet witch and the events that lead to her mental breakdown. Avengers Disassembled is a prequel to another of Bendis’s works ‘House of M’ and although you don’t necessarily have to, you should probably read this one first, as it does briefly sum up some earlier connecting events in the timeline. 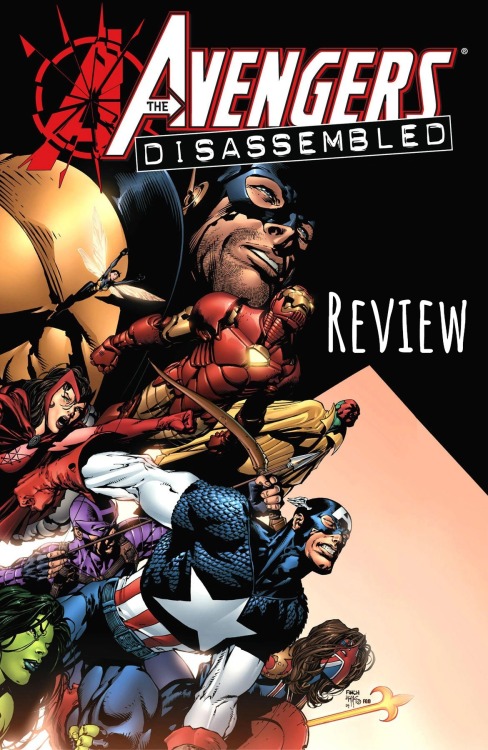 When I think of the Bible, the Quran or the like, I always imagine them being read in churches, mosques, or any place for spiritual congregation. Given that religion has been historically used to oppress people, a growing number of anti-religious views is not surprising. So in effect, these books are not always seen in the best light.

However, I’m curious whether any of you here who consider themselves outside of the religious spectrum read (or plans to read) texts and books mostly intended for prayer. [Personal aside: I’m baptized a Roman Catholic, but I view myself as agnostic.] Any of you here who are former theists? Or non-practicing? Grew up in a very religious household? Still practicing but not as devout as before?

For those who read, be it leisurely or for religious purposes, what values and stories struck out for you? How do you relate today with their religion of origin? Do you tend to go back reading it (as billions of people regularly do)? Do you access something in them that you think theists don’t usually see or espouse? What prompted you to read one?

As a controversial bonus, how do you rank them among other memorable books you previously read?

Hey, I am trying to write a chapter in my book which is almost entirely composed of two character’s arguing, and this happens after the first one barges in / forces a confrontation with the other.

I was wondering if there are any scenes like that in books I can read to get a sense of how to pull it off? effectively?

So yeah I’m basically just looking for any large-scale / intense, and impactful, argument scene between two character’s, the longer the better.

Thank you in advance :)