Things we don’t appreciate about Red Hood in Titans s3

1. Just the fact that he’s transitioned means he’ll be leaving the Titans for good soon.

2. Many people complained s2 of Titans was full of ‘actions without consequences’ scenarios e.g Dick escaping prison without cops going after him, or Gar mauling civillians yet seeming to heal from trauma too quick etc.

Red Hood coming after the Titans is thee perfect form of actions with consequences. It links s3 to the fallout of s2, and will test the Titans on how to handle their scruples more maturely, but more importantly, together.

3. If rumors are true, Red Hood is headed for a spin off series. And if y'all don’t know I’ll be booking in advance to watch it if it happens. We all loved Jason in s1 , and now we’re acting like he’s nothing because of the poor writing choices and character development Titans writers made last season with other characters? Those errors can be fixed (presently, there’s been lots of information that they’re correcting their story direction), but Jason is still a solid, well-portrayed character like most of the others.

Titans will reportedly be casting an African-American actor for the Tim Drake role. What will the Batfam/Jason haters say now?

#seriously what excuse will you have now for hating Titans so much, #tv: titans, #titans, #tim drake, #jason todd, #red hood, #robin
3 notes · See All
lumoscharlieText

Arkham Knight Jason let me talk to you

Batgirl is just perfect in Batman Three Jokers. This is from issue 3.

Them holding hands is just adorable 😍

Chapter Summary: Y/n deals with unexpected confessions, being saved by her family, and Dick is mopey. (He’s gonna get his moment in another chapter, I promise.) Damian is also soft.

Summary:  Dick Grayson leaves everything behind again to have his own life in Bludhaven. He leaves behind a heartbroken Y/n, who is unknowingly pregnant. With a broken heart, she finds solace in Jason. During Levi Grayson’s second birthday, his father returns, setting family tension high. and awakening Y/n’s old feelings. Can the Batfamily put everything aside for their beloved baby family member? What dangers lie ahead for Levi? With Y/n’s heart torn two different ways, can she make the right decision for not only her heart but for her baby boy too?

A/n: Again this chapter does deal with some heavy subject matter so please heed the warnings.

I am also very sorry for leaving Y’all for a long moment, college is wild lol. 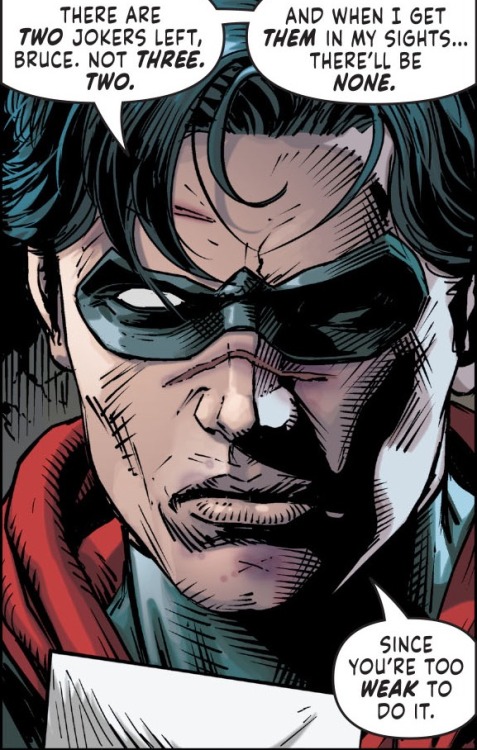 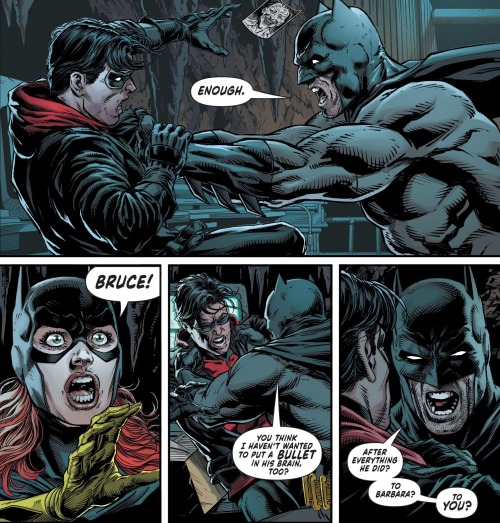 Jason: Babe has an insanely strong opinion on everything. Go on. Ask her something no one should have an opinion on.

Roy: What’s the worst multiple of 3?

Most satisfying thing to come out of Three Jokers is Barbara smashing the camera in his face, I could not be more proud of my girl 🖤

#dc, #Batman, #three jokers, #barbara gordon, #batgirl, #jason todd, #red hood, #look at my baby all grown up and smashing clowns, #I hate that clown so much my god
26 notes · See All
the-undead-robinText

I’ve seen a couple posts mentioning this so I figured I’d give my two cents on the situation. Long story short, yes and no.

Like the majority of readers, I think the Jaybabs kiss and “relationship” was disgusting. I appreciate them trying to delve deeper into Jason’s trauma, which is something I think RHATO fails to do well, they didn’t really go about it the right way. Having Jason throw himself at Babs, “flirting” with her by making self-deprecating statements, and wanting to change himself to get her to like him just sends a really bad message. Although his reasons are very clear to the readers, I think DC views this more as “Jason’s failed relationship with Babs” rather than “Jason is deeply traumatized and is only latching onto Babs because she showed him a sliver of support” which is why it’s problematic. That doesn’t even bring up the fact that she is the long-time love interest of his older brother and the implications of that are just uncomfortable.

Another aspect of the story that people are worried about becoming canon is Bruce and Jason’s dynamic. While Bruce shoving Jason and snapping at him (right after defending his actions in the last issue, remember that?) is out of character for the majority of Batman story lines, Bruce has been abusive to Jay before. The disaster that is RHATO #25 has Bruce beat Jason so badly that Roy has to come save him and he couldn’t get out of bed for days. That’s pretty f*cked up and sadly, it’s canon. So, when referencing the other depicts of their dynamic, it isn’t entirely off. I hate it with every fiber of my being, but as it stands in the current timeline, Bruce is a major asshole towards his kids- Dick, Tim, and Damian included. From the Babs side of things, she’s been written to be an asshole in the recent comics too. In the latest interaction she had with Dick, she blames him for a lot of stuff that isn’t his fault and basically tells him to get lost. While I would make the argument that that was out of character for her, just like with Bruce and Jay, it is unfortunately canon. Honestly wtf is going on at DC anymore….

In conclusion, I personally hope they carry some parts of the story over into the main continuity. If it does end up being ruled canon, I wouldn’t be majorly upset (mainly just pissed about the Jaybabs stuff then being canon). Jason’s abandonment issues, PTSD, lack of emotional support and the other aspects of his character explored in this comic I absolutely love. While RHATO does bring up some of this, it’s brief and not extensive enough. I’m sick of seeing the “he’s a bad boy, he’s a rebel” because he’s actually just traumatized and in need of support. Johns said he wanted to fix this, but after reading all 3 issues, he just made Jay latch onto Babs. I do love his mannerisms and overall personality in this comic though, I just wish they did a better job with the big picture if that makes sense.

From now on keep Barbara and Jason away from each other.

Since, the writers don’t know how to properly write them both, we can’t have a nice big sister little brother relationship. Honestly fuck Geoff Johns. 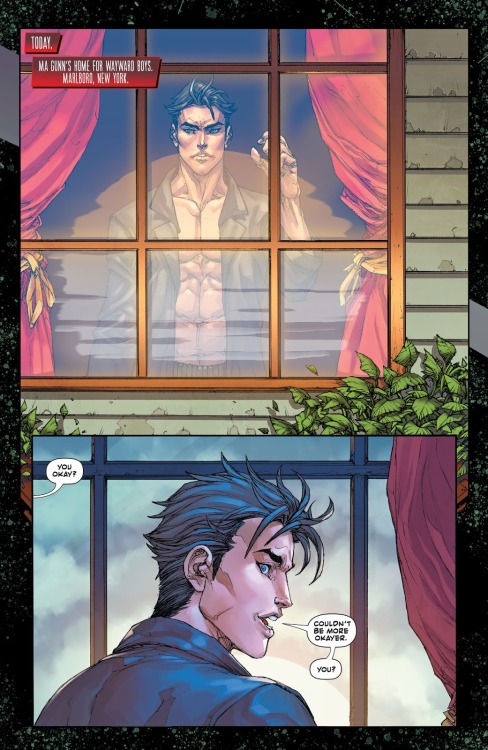 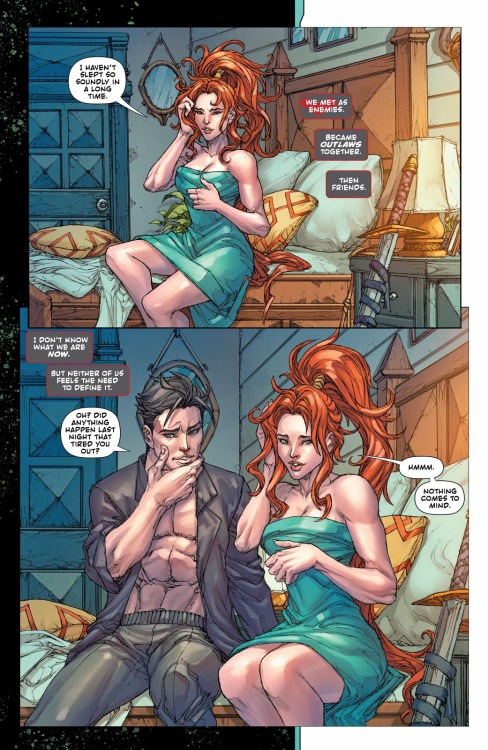 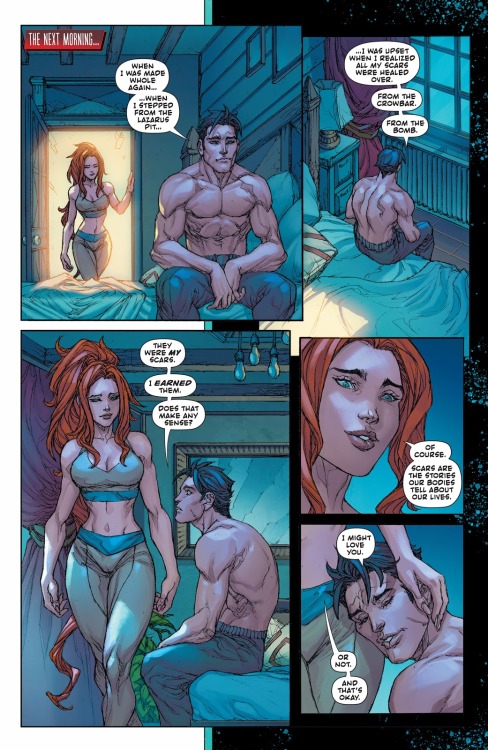