The father of all Simps

The dude is going to give you eight nights of ass whippings.  

I’ll have to try that

I’m not a religious person(or Christian for that matter), but I told a friend of mine who regularly attends church about how during a game of among us, we all voted for Jesus to be ejected, and she told me about Judas’s betrayal and I couldn’t help it

If you think about it, canonizing someone as a saint was the original form of stanning.

i had a realisation

@queersatanic is non-theist, not anti-theist

We don’t talk about negatively about “religion” because the problems we have with particular religions are not located in their beliefs in the supernatural or their rituals.

We oppose harmful superstitions, like gender essentialism and white supremacy, that people believe in and act on to hurt others. We oppose hierarchies, like patriarchy and capitalism, like ableism that says some people’s comforts are inherently worth more than others’ needs.

But we don’t oppose religion absent those things, and we do oppose those things absent religion.

Communities with shared beliefs and traditions that help them navigate the world now or have continuity with their ancestors are not the enemy or worth us being The Adversary toward. Materialism has space for how people really feel and what helps them achieve the ends they want, from mnemonic devices to prayer.

When someone says, “I hate religion” they agree with Dominionists about all religions except the last one.

This is why figures like Richard Dawkins and Sam Harris can be so popular among white nationalists who hate Muslim refugees or Mexican Catholic immigrants. It’s why animus toward “Abrahamic faiths” in societies that are overwhelmingly Christian does not threaten Christians but does help target already marginalized Jews and Muslims.

“I hate religion” stated universally or even “Abrahamic religions are bad because you just have to accept things on faith” is not only a statement of profound ignorance (e.g. “the Torah is not in heaven”), it makes you a tool of oppression rather than an enemy of it. 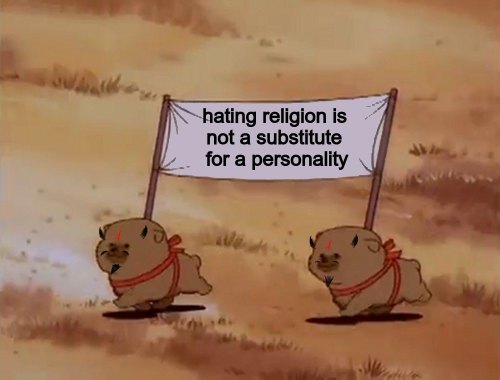 this is your daily reminder that M*hammad made adoption forbidden in Isl*m because he wanted to fuck his adoptive son’s ex-wife (he was the reason for their divorce) without criticism from his followers because pre-isl*mic Arab customs were against it so he rejected Zaid as his son and Zaiynab became just a regular divorced woman (she was also his first cousin but that’s a whole other can of worms) , what a self serving selfish horndog. and now millions of kids have to suffer because momo couldn’t keep it in his pants.

picture below is just a memed version of the thing 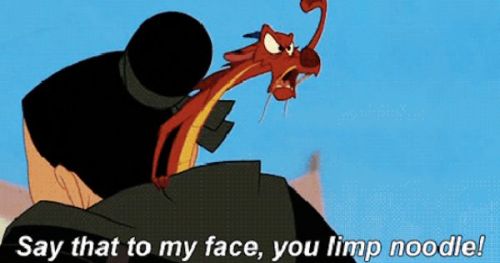 (ノಠ益ಠ)ノ Said The Lord Unto Man, But Man Just Smiled And Nodded As He Shat Upon Everything That Has Ever Been. Ever.

And God Sent A Great Plauge, And God Said Unto The Evil One Fine! You Were Right. Is What You Wanted To Hear?!

And The Evil One Said Yes, As He Sipped His Margarita.