Trending Blogs
#renee montoya
incorrectbatfamChat
Kate: If I could change the world, I'd make every person look like Renee Montoya.
Bruce: How would you tell which one was Renee?
Kate: They wouldn't all be named Renee, dumbass.
Dick: I wonder what I'd look like if I looked like Renee.
#source: 3rd rock from the sun, #kate kane, #batwoman, #bruce wayne, #batman, #dick grayson, #nightwing, #renee montoya, #question, #kanee, #batfamily, #incorrect batfamily quotes, #batfam, #batboys, #batbros, #batkids, #batsiblings, #batman family, #batclan, #birds of prey, #incorrect quotes, #incorrect dc quotes, #dc comics, #tw swearing
165 notes · See All
wordsoflittlewisdomAnswer
I loooove the Birds of Prey at the airport!!! Could u maybe do BoP proposing?? Thx!!❤️

So I’m going to use s/o for “significant other” and then you can decide who they’re proposing to (x reader, canon characters, ocs, whatever your vibe is)

Harley: She isn’t really one for getting married, but if she were to propose it wouldn’t really be premeditated. Her and her s/o just blew something up, or just managed to lose their pursurers after doing something illegal, and she would swing her arm around her s/o’s shoulders and be like “we should get married.” She didn’t have a ring so she just pulled off one of the ones she was wearing and was like “take this.” Absolutely nothing changes about their relationship. They still live together in a cluttered, maximalist flat. They never actually got *legally* married but one of the wedding gifts was a forged marriage certificate.

Helena: I could maybe see her getting proposed to, but if she was the proposer: Watched romance movies to prepare. Read a bunch of Buzzfeed lists about the perfect proposal. Bought a nice, classic ring. Practiced her proposal in the mirror. Wrote her proposal on her arm so she wouldn’t forget it. Washed her proposal off her arm so her s/o wouldn’t notice. she didn’t kneel when she proposed, she just sorta was like “hey I have something for you” and handed the ring in the box to her s/o who opened it and was like “is this…” and Helena was like “yea it’s a wedding ring.” They struggled with getting legally married, because according to the government refuses to believe Helena is alive.

Dinah: Went to an antique shop for a lamp, came out with a ring. And also the lamp. She’s responsible like that. She wound up carrying the ring around for a few weeks because the moment kept not feeling totally right, or something would come up. Anyway, her s/o was like “let’s go out to dinner” and Dinah was like “I am going to propose @ this dinner. I must.” They get there and Dinah’s s/o proposes to her. And Dinah’s like. What. How. Dinah pulls out her ring and does her proposal too, and her and her s/o then proceed to enjoy a lovely dinner together. The double proposal becomes one of their running in-jokes.

Renee: She isn’t really a romantic, but she’s willing to give it a try. I could see her doing some sort of living together arrangement without marriage? She has a ring that’s been in her family, and she’s going to do something nice and fancy for her s/o, but she realizes that isn’t really for either of them, and she winds up doing her proposal while they both eat alcoholic ice cream in pool chairs one hot summer day.

Asks are open! An ask is all I ask for!

Just trying to figure out wardrobes for my DCSHG customs. My eraser is so crappy. In order: Huntress, Renee Montoya, Batwoman, and Zatanna.

I found a few promising ebay listings for Barbie clothes, but I’m going to have to dig my mom’s childhood Barbie out of storage to do size comparisons, since I somehow didn’t bring a single Barbie with me when I came down here? Got one Barbie head, I think. 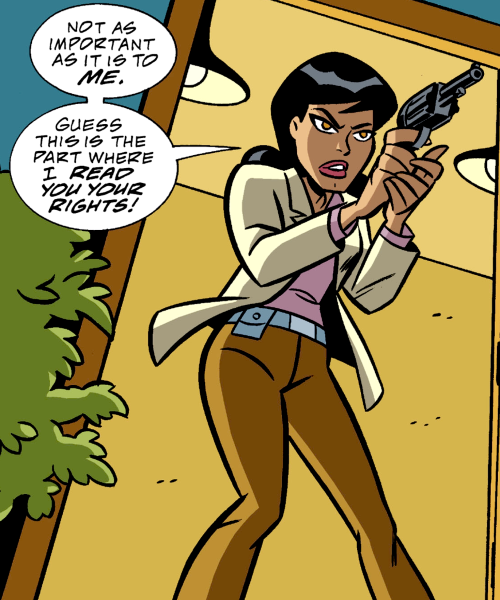 Harley: Buys herself a whole new outfit from the airport stores. Little do they know she also stole all the sparkly little things that caught her eye. Orders an alcohol, a cranberry juice, and a soda on the plane and mixes them all together. Has her name spray painted on her suitcase. Climbed onto the luggage conveyor belt and went through the flaps into the back area to find her bag and then rides the conveyor belt back out.

Helena: Gets to the airport so early. Will take flights that leave at 4am. Really overthinks her food and coffee order. Brings snacks. Gets tense in security because even though she double checked like six times she’s CONVINCED she still has a knife on her she forgot about. Will fight you for the exit row seat because she’s tall and needs space. Tried to tip the flight attendant who brought her drink.

Dinah: Buys lunch at Starbucks. Will Not check a bag if she can help it. Gets annoyed if the flight is delayed. Will talk to the people who she sits next to on the plane.

Renee: Literally wears pajamas. The flight leaves at 8am. If it gets delayed she will be Annoyed. Acts like she’s being inconvenienced. Orders alcohol on her 8am flights and feels no shame about it.

Cass: Steals from the airplane stores. The x-ray security machine reveals all the stolen stuff in her cast. Bought a movie, but stares out the window of the plane the whole time. Orders a soda on the plane, but Harley lets her take a sip of her soda-alcohol-cranberry-juice thing. Says she won’t sleep on the plane. Sleeps on the plane.

Roman: Usually charters a plane, but the one time he flew commercial was a Disaster and a Miserable Experience for All Involved. Nearly threw hands with the airport worker who said he could only check three bags. Was that one person who isn’t ready at security and holds up the line taking off his shoes and watch and stuff.

My asks are open! Send me an ask for more Birds of Prey! Please! An ask is all I ask for! 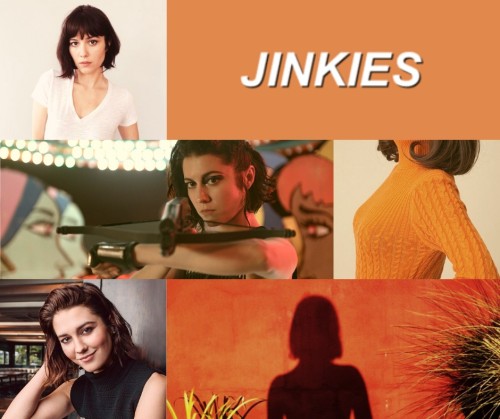 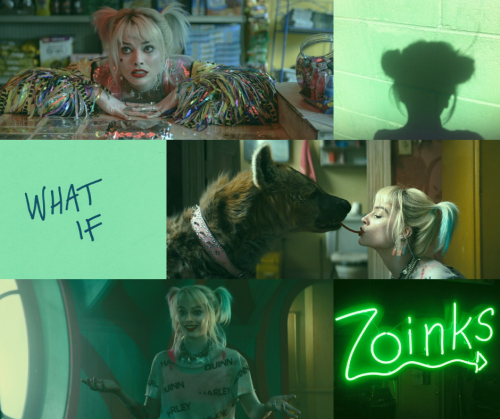 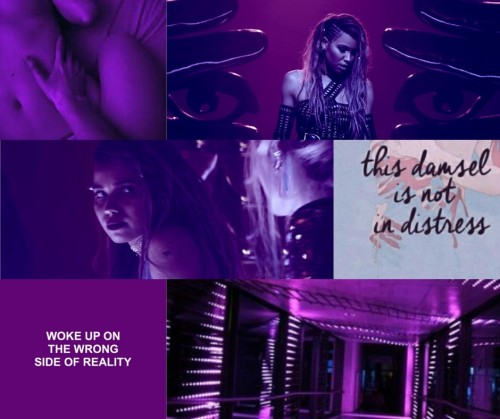 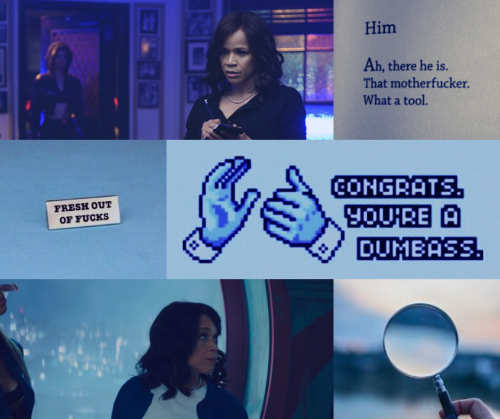 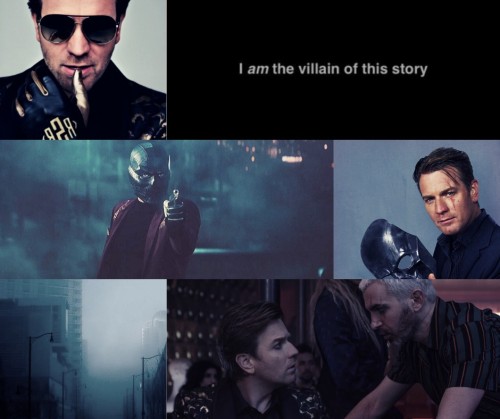 Had planned to have this done on the 21st, but whatever.

just a little thing to notice but at the beginning of BoP where Harley gets drinks for her “friends” but then she hears them talking shit about her and in the end she goes to get drinks for Helena, Dinah and Renee and they’re talking sweet things complementing each other and I think that’s the group she deserves

harley’s emotion over losing her egg sandwich >>>>> every mcu movie

#i finally saw bop and i would DIE for dinah and helena, #birds of prey, #into the spiderverse is the Only exception, #harley quinn, #black canary, #huntress, #cassandra cain, #renee montoya, #cressisqueen
59 notes · See All
johnfourmiText

montoya from a while ago. part of my ppl practice.. honestly not too satisfied with it but thats what practice is for i guess :-D

And now for something completely different! Renee Montoya agrees to have dinner with Harley Quinn. She’s sure that flaunting, DGAF Harley has some ulterior motive. And she’s right…

Fluff, femslash smut, a little spanking, and a dinner out for DC fans, for anyone else who enjoyed the Birds of Prey movie.

So it’s the middle of a pandemic and I need to Get Home, so I’m stuck in a twenty hour car trip. Luckily I don’t have to drive.

Harley: Would get distracted. Turns a two day trip in like four days because she keeps seeing signs for things she wants to do. Goes absolutely feral at Cracker Barrel.

Helena: no bathroom breaks. we will get there Soon. Wakes up at six am and drives for twelve hours straight. Road rage. Feels bad about not letting anyone have a bathroom break.

Dinah: Plans out stops in advance. Mostly takes the highway, but can occasionally be persuaded to take the scenic route. Tries to get Harley back on track.

Renee: If she isn’t backseat driving, she’s sleeping. Has no shame about swearing when someone misses the exit.

Cass: Headphones on, Cass out. Other than Harley, none of the Birds will let her drive. Reads brochures about the destination in the car and doesn’t get carsick.

Rosie Perez as Renee Montoya in Birds of Prey: And the Fantabulous Emancipation of One Harley (2020)

#rosie perez, #renee montoya, #birds of prey, #harley quinn, #dcedit, #dc, #birds of prey and the fantabulous emancipation of one harley quinn, #movieedit, #filmedit, #female directors, #dc characters, #gif*, #moviegif*, #i love this character in every reincarnation, #and i'm always such a sucker for the generational gap between new gotham and old gotham, #and any time that's utilized is amazing and i'm in love
361 notes · See All
janepetrasPhoto

(after birds of prey)

Poison Ivy: Harley what the fuck did I miss?

Poison Ivy: Harley what the FUCK did I miss?

Sometimes a family can be a cop, a pickpocket, a psycho, a songbird and a Mafia princess, and I think that’s beautiful.

#birds of prey, #dc, #Margot Robbie, #harley quinn, #dinah lance, #Cassandra Cain, #renee montoya, #the huntress, #i just watched this yesterday and i miss them already, #idk if i should use the word 'psycho', #but harley Quinn herself used it so, #idk, #mt
190 notes · See All
wordsoflittlewisdomText

Harley: Is very chaotic. She can swing between being super bored and being super engaged in something. Cuts up all her clothes to make new ones. Does really weird craft projects.

Dinah: Is worrying about money. “Club singer” isn’t a particularly high-paying job, and she doesn’t like taking money from Helena’s fortune, but she’s very responsible with her money. She takes the time to practice her hobbies and learn to cook better.

Helena: Is very disciplined. She has a schedule and she sticks to it. She misses going to work out, but she goes on lots of runs and has a grueling inside calisthenics routine. She takes an opportunity to try out sleeping in and being lazy (lots of things she missed out on when she was training to get her revenge)

Cass: Goes very stir crazy, but she’s living with Harley, who’s both entertaining and pretty good at coming up with stories and projects and weird shit to do that can be done inside. Gets very excited for trips to the grocery store.

Renee: Pulls all-nighters obsessively researching whatever person/event she thinks might be suspicious. Makes like four bulletin boards of pictures connected with red string, because she thinks they suit her vibe. She winds up keeping them as decor.