That’s the funny thing about death, it is so tragic to us, and yet so peaceful to the departed.

Just like the Calabazas our loved ones are met with the flowing spring, pumpkin seeds that are sprouted alongside the road… taking off their dual nature and fully becoming their unseen self.

While our hearts are filled with a gaping hole, that never fully heals, our loved ones meet perfection.

So thank you, to all the souls who have blessed us with the opportunity to once laugh with them, smile with them and love them.

The elderly who gave us the chance to bathe them in their moments of weakness, to feed them and dress them.

You are well now, like sickness and old age has never known you before.

You are now like the perfect day in Autumn -

We see you in our dreams, with the purest smiles, providing us the comfort we’ve been longing for, giving us a glimpse of hope. We hear you in times of despair and instantly get strength because we know we haven’t fully lost you. Your spiritual selves are alive. And they will be forever, and ever, and ever.

We thank the universe for once walking with you.

Rest in peace, you are loved and missed.Till we meet again..

(Inspired by tribute to Kobe and Gigi, performed by Jennifer Hudson)

#rip, #I’m getting too old for this site lmao
0 notes · See All
rapunzelsText

#rip, #the day is literally gone tf, #@ my brain: can you please let me sleep before 5 am this time, #hush elle
0 notes · See All
septic-dr-schneepAnswer

Magnum, a pirate from who-knows-what-time-in-history-because-the-AHWM-timeline-is-bonkers: What’s a spreadsheet?

u know that feeling when u wanna write— but you also dont wanna write— or rather, u can´t feel the words coming in together so you can only stare at the screen for an indefinite amount of time hoping the inspiration comes—

“Magnum? What are you doing?”

“Healer!” the captain called, Google limp and flopping in his hands like a stuffed toy. “Your mate’s lost his touch! Cold as a clam, eyes like a dead fish, speaking in tongues. I’ve seen nothin’ like it! Have ye a tonic for this?”

“Stop! Put him down, get away from him!”

“Why, is the touch contagious?! I only be askin’ if he was alright!”

“What words did you use exactly?! Did you say – ?” Edward bit his tongue. “N-Never mind! Captain, just stay back, stay silent and have the grace to look really, really sorry! Google, end Command Mode.”

As soon as Google’s eyes cleared, crimson light surged in them and he lunged, forcing Edward to catch him in a restraining embrace. “Google – Google, listen to me, he didn’t mean it! Please give him a chance, please don’t hurt him, he’s just – Let me explain it to him – Whoa!”

Google steered Edward aside like he weighed nothing, free to stare the startled captain down with loathing. “Use words of caring to manipulate me, put your hands on me again, and I’ll see that you need prosthetic arms as well,” he snarled.

“His eyes!” Magnum burst out, agape. “Red as the devil, he is bewitched!”

“I told you to stay quiet,” Edward half-hissed, half-pleaded as he grabbed Google’s arm. “Please…Please, don’t hurt him. Let’s take a walk.”

When I first heard the song, without looking at the album art nor the video, I thought it sounded so familiar and I couldn’t for the life of me remember why. But when I saw that it was titled flowers it reminded me instantly of the echo flowers in Undertale. The vibe of the song is very reflective and with the water drops and the repetition It was like it was a trip back in time. But I tried to keep with the image, the feeling of the echo flowers as I started to brainstorm. I had a rough idea of what I wanted. I think that there was definitely something inherently sad about the echo flowers so I wanted a child-like silhouette laying in fetal position and surrounded by blue. I had to practice leaves again so it’d feel more natural I also water colored asui from a manga cap;) I considered using her in the pattern but her hair was going to steal the focus. I drew a rough stitch template and used that to try and ground my design in reality, really plan out the stitches in the design. The last sketchbook page is my rough draft and below the transfer onto the cloth:) 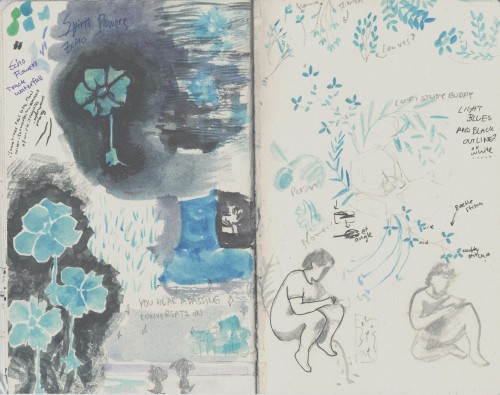 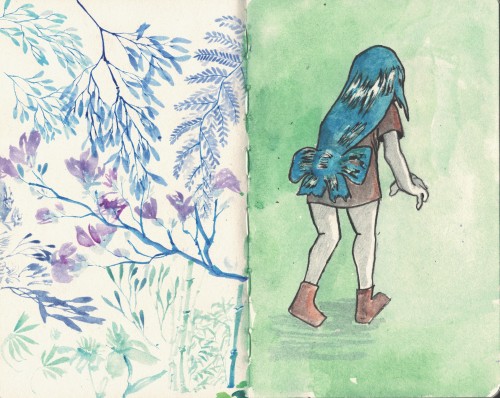 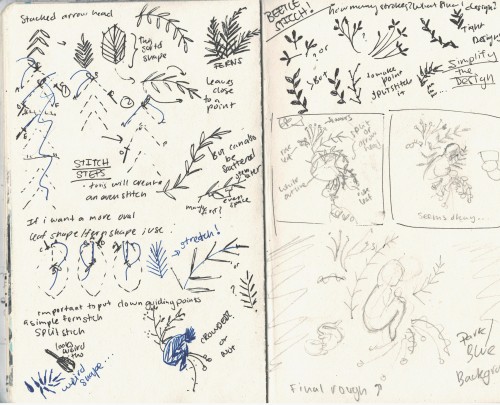 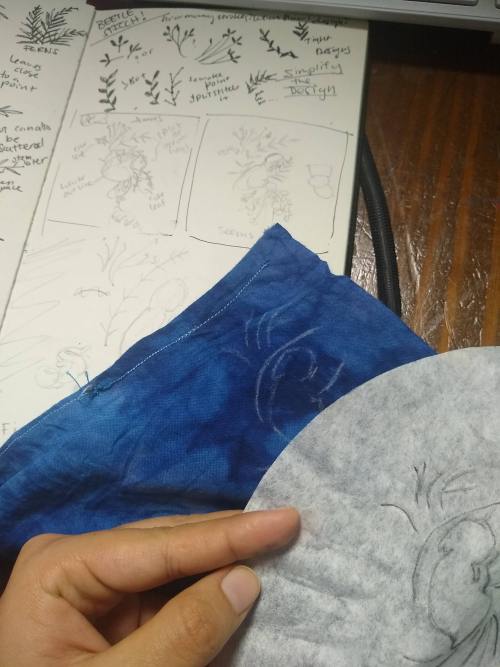 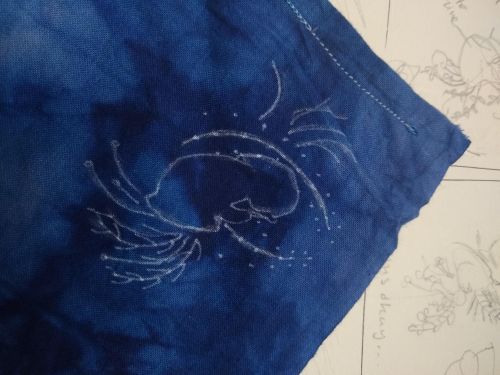 So uh, anyone else staying up to see Space Dad and his green son on tv tonight? 👀 Because same.

#don’t worry no spoilers, #ngl this is what’s gotten me through college at this point, #waiting for this moment, #as I simultaneously work on an essay due in 30 mins, #rip, #i’ve been working on a mandalorian drawing all day aight, #geez it’s like schools don’t even know S2 is coming out🙄
5 notes · See All
moth208Text

i hate the internet

#very few things on the internet actually induce dysph*ria with me but i just saw one of the things that does so, #rip
0 notes · See All
undeniablefearlessText

usually at a time like this, i’d say i hate change, but this time.. maybe nothing changed. maybe i just wasn’t looking at things from the right angle. 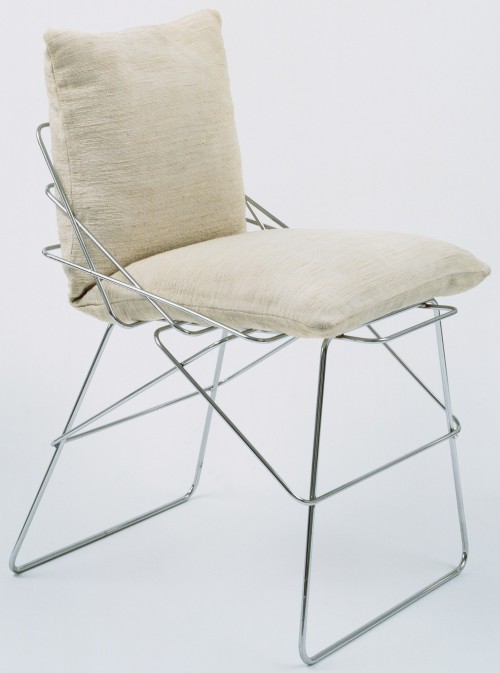 Holy shit break my heart why don’t you

YES,, I can definitely see the scenes with Ben hitting so hard and so sobering if he were shown as seventeen, because it would really hit home how he was just a kid. A kid who died horrifically, and then spent sixteen years powerless and unseen, and probably more lonely than we could even imagine. Much like how in the scenes with Five acting like an old man and reminding us just how old he really is, it would have hurt to be reminded just how young Ben was.

During Ben’s second death, maybe we could’ve seen Ethan Hwang for an extra kick. The hug where he dissolved into light– to make it more depressing, maybe Netflix could have pulled the season one time-travel scene (where the camera pans around Five and his siblings and they’re shown as thirteen again.) Ellen hugs Justin, camera cuts to show the light dissolving from his hands, and then it cuts back to their faces, and it’s Ethan and TJ. I feel like this would’ve made the punch that much harder. 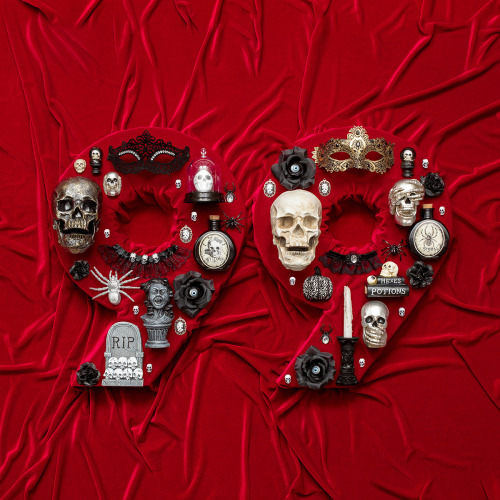 hades’ thots: now i am not so much into harems or gangbangs BUT there is this group of guys from dcmk that just make me … i mean look at them… c..can someone thirst avec moi ?

yes this is a screen shot from ig

#hades' thots, #Ughahahaw, #i wouldnt mind being in the middle of this, #rip, #maybe i just need to sleep
5 notes · See All
unkn0wn2-uText

My father passed away on October 30th unexpectedly. It hurts he didn’t get to see me enter my teen years. Never got to see me graduate. Won’t be there to walk me down the isle. I’m not over it.

My childhoodfriend, my soul mate who was all about Halloween has passed. Her depression took her. I tried so hard to be there. And once she was gone, I was completely alone. No one talked to me about it. It was like she was never there, never to be mentioned again. This one really hurt. I’m not over it.

I did have another, we meet in highschool and grew so close. I was in her wedding and when she was going through the toughest time in her life, I was by her side. She moved states away, got into a sticky situation and I offered for her to stay with me. She did, for one day and then disappeared in the middle of the night, never to be seen again. As much as I want to be, I’m not over it.

So yes, I have connection issues. I crave deep friendships yet can’t get there anymore. I want to, but don’t know how. That part of me has been so so gone for years and I don’t know what to do about it.

#loss, #frienship, #not over it, #hurt, #rip
0 notes · See All
mcthegirlVideo

It’s a little late, but happy birthday Bob Ross! Thank you for the good memories, and lots of smiles. Rip