i ABSOLUTELY am :3c

#i am BUZZING my dude!!, #also very very scared, #can’t wait to read all about riz’s deteriorating relationship with the one person he has in his life, #until high school anyways, #sklonda gukgak, #riz gukgak, #fantasy high, #answered ask, #nonbinarywithaknife
11 notes · See All
nonbinarywithaknifeText

gorgug is canonically 6′4. riz is “3-4′ tall”. this brings me an enormous amount of joy

I’m honestly so in love with the idea of Adaine and Riz starting a detective agency. Just yellin theories and making coffee. It’s what they deserve. 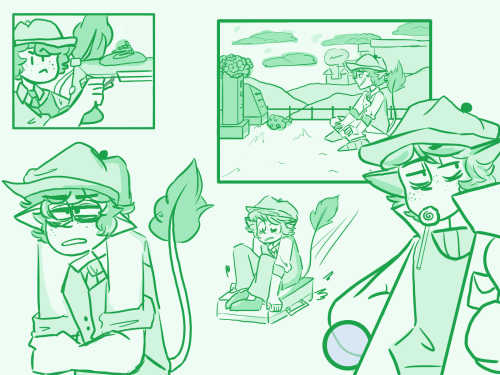 pixel art of some of the bad kids! 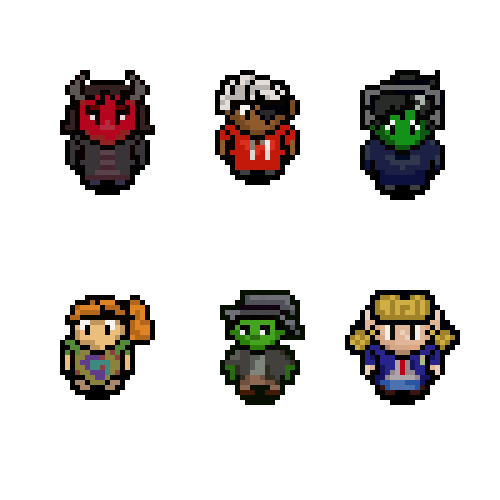 Don’t let the lack of background fool you, they’re on a date 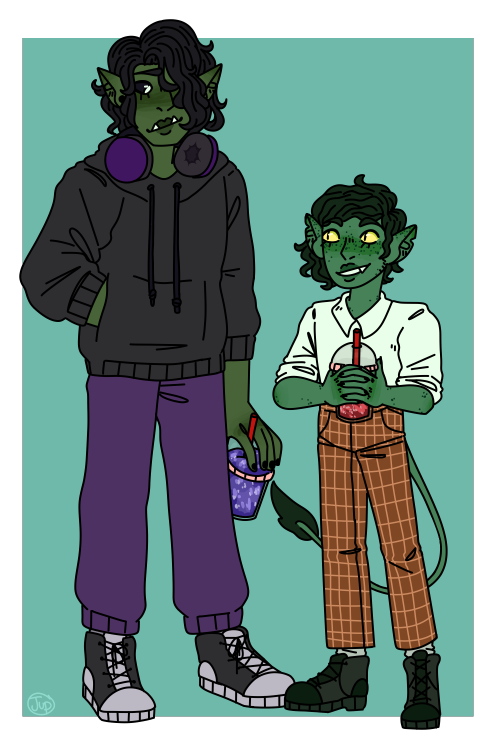 Goldenrod or whatever his name is pulls them apart and yells about detention, and Riz just focuses on not biting Goldrod’s hand to make him let go. It only makes him feel a little better that Fabian is in the same position. He hates feeling small.

He lets them go after some more yelling, and Riz shoulders his bag and huffs off. At least he’ll get to class on time. He’s sure his first impression will be bad enough without being late.

He finds Porter’s classroom easily enough, and he’s already inside at his desk. Riz starts to head to the back when Porter looks up and gestures toward the door.

“This is the barbarian classroom son, rogues are next hallway over.”

Riz clenches his fists but doesn’t say anything, and keeps moving toward the back.

“Hey, joker, I said this was the barbarian classroom. What are you trying to pull?”

Riz swallows a growl and turns to Porter. Pulls his axe from his back, and slams it into the floor. The clang echoes around them, and Porter’s eyes widen a little.

Riz can feel the eyes of the other students in the classroom on his back, and ignores them. Porter looks away and coughs awkwardly, says, “Ah. Well, take a seat, kid.”

Riz picks up his axe and makes a decision.

He turns back to the front of the room, and finds the desk closest to Porter’s. It’s empty, of course, and so are the seats around it. No one’s late enough to voluntarily sit there.

Riz trots up, drops his backpack in the seat, and sits directly on the desk. Porter looks up and Riz stares back at him. He can’t stop the grin from trying to form on his face, and he knows it’s obvious what he’s doing. Porter’s eye twitches. Riz flicks his tail, pleased.

The bell rings, and Riz is still sitting on his desk. Most of the other students had given him weird looks, or in Ragh’s case, glares, as they’d noticed him, but Riz is used to being the weird kid. It’s fine. (He notices that a circle of seats around him remain empty, and not just because they’re near Porter’s desk. That’s fine, too. Riz is fine by himself. Riz has always been fine by himself.)

Porter seems to have decided to solve the problem of Riz by ignoring him, and Riz can feel himself twitching in annoyance. Thirty minutes into the lecture and he hasn’t even glanced his way once.

Part of him wants to make himself be noticed. But he already has detention. He made his point. It’s only the first day. In the end, it’s the picture of his mom’s tired, disappointed face, and the arrival of someone new that stop him from doing something stupid.

The class is just beginning to wind down, when a tiefling girl walks in, eyes the classroom, and beelines straight for Riz.

“You seem cool, not that I care about that or anything,” she says, slumping into a seat next to him, completely ignoring Porter’s incredulous look.

The girl pulls out a- clove? cigarette?- and lights it, and Porter breaks himself out of his confusion.

Somehow, it works, despite class almost being over and the girl having no pass or anything, and Porter goes back into his lecture. Riz notices the guitar on her back and realizes she has to be a bard. Why she’s here, he doesn’t know, why she’s sitting by him, he couldn’t guess, but she hands a clove cigarette to him.

He eyes it. He’s never smoked before. His mom would almost certainly smell it on him. They’re in the middle of class.

It’s an offer. An olive branch, even, if he wants to be optimistic about it.

(Sitting alone on the bench outside the principal’s office. Alone in the nurse’s office with bloody knuckles. Alone on the playground, the other kids laughing together. A circle of empty seats separating him from everyone else.)

Riz takes the clove, and Fig smiles at him.

a list of favourite Murph Noises ™, as compiled by the D20 cast:

As promised, here are the alternate designs for the Ace Detectives logo!

Usually when I’m designing these I have a super clear idea of what colour scheme I want to use but I honestly struggled with this one.

I initially was taking inspiration from black and white noir films, and then looking along the lines of an old private investigator office door, with the cool gold lettering on the frosted glass. (I can’t help it, aesthetically noir does it for me)

Then a few different versions later, I realised I was an idiot and the obvious colour scheme should absolutely be inspired by the ace flag.  This then developed into the final version!

#myas stuff, #dimension 20, #fantasy high, #gorgug thistlespring, #riz gukgak, #fabian seacaster, #fantasy high is the reason im out of an art block tbh, #also idk if this pose makes sense, #it seems super stiff BUT oh well i love them boys, #riz is both being held and is holding, #ill be over here thinkin about the fantasy high kids n how much the story has got me through school
50 notes · See All
plutosfuryText

This spiraled so fast. It was just gonna be Riz in Gorgug’s hoodie than Gorgug happened, than I thought it looked to plain and needed a background so now they’re at the mall.

#dimension 20, #fantasy high, #riz gukgak, #gorgug thistlespring, #i wanna do a whole set of riz in his friends clothes, #he steals when he is comfortable with you, #Fabian would totally brag that riz wears his the most, #but we all know gorgug’s hoodie is the most stolen thing, #I’ve reached the point where it is harder to thing of what to draw, #it’s more sporatic right now, #art?!, #thistlegak, #maybe?
375 notes · See All
tinygalaxykidText

Kugrash redemption this, Riz sophomore year arc that, the real iconic Murph character arc is going from “YOU GOT IT!” to “Fuck! What?” Now THAT’S character development!

Night Yord, people, it’s all coming together. I felt like there was a distinct LACK of interpretations on what Riz’s tattos look like. I’m not all caught up yet, but if they never bring it up again Riz is canonically COVERED in clues/evidence about their second adventure. I got my fingers crosses lol I really want him to keep these. 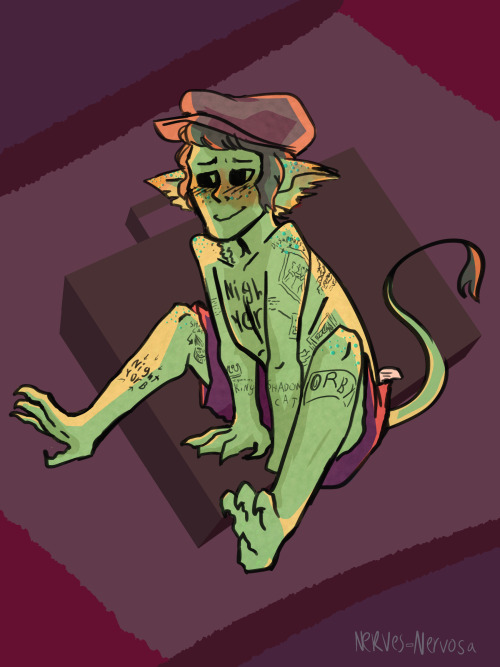 the thing about youth culture is, I don’t understand it. 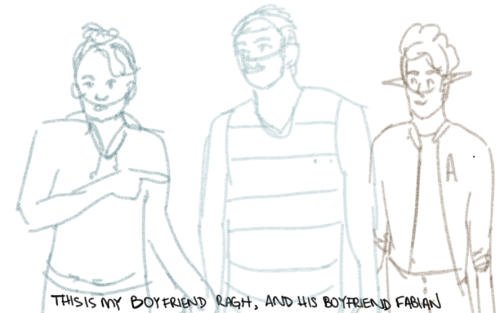 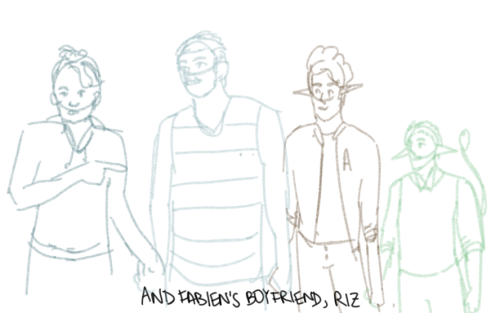 #a jennie original, #photo, #is this the dumbest thing I've drawn, #maybe not, #but its up there huh, #maybe I'll fully render this later, #fantasy high, #fabian seacaster, #gorgug thistlespring, #ragh barkrock, #riz gukgak, #my art
25 notes · See All
riz-gukgakPhoto 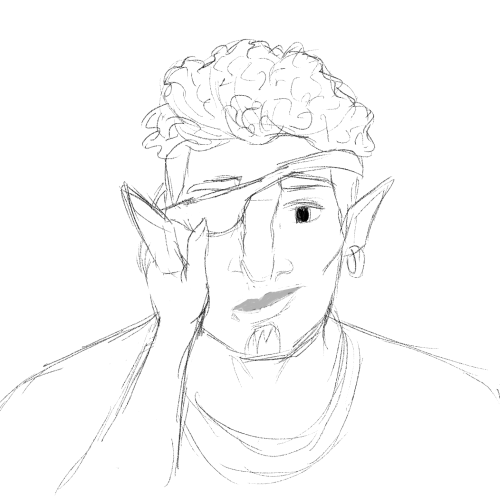 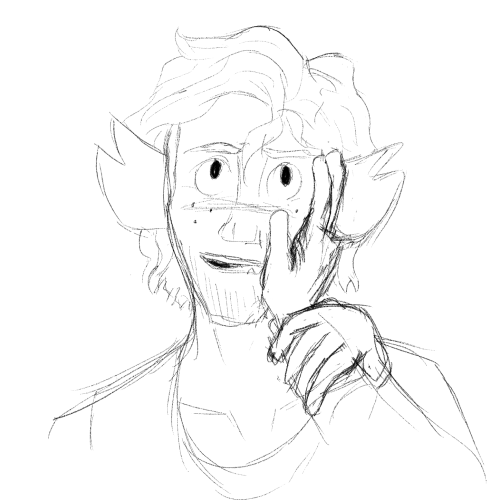