Qrow: I hate him.

Qrow: You have no idea who I’m talking about.

Obviously I’ve been thinking about this a lot cause I’m obsessed and just posted the shortest 5 paragraph fanfiction about it but anyways.

It not a coincidence that Robyn and Qrow had that talk about semblances interfering with personal relationships in the same episode when Ren snapped and Jaune was like ”dude it’s ok to let us in”.

Cause the boy literally suppresses emotions to keep people safe. That’s gonna mess ya up.

#lie Ren, #rwby, #rwby 8, #rwby volume 8, #rwby spoilers, #qrow branwen, #robyn hill, #jaune ark, #I am overly invested in both Ren and Nora, #and that may be a tidge of projection, #but I have been thinking about this in particular for at least one whole season, #just take some trauma and stack a bunch of repression on top of it, #having healthy coping mechanism or forming lasting bonds is gonna go real well, #also it's 1am and I'm posting about this now, #late night can't sleep only think about rwby
5 notes · See All
happy-huntressesText

If they ever bring rwby chibi back, imagine the happy huntresses in it omg

Robyn: Hugging is out.

Platonic scissoring is in.

She admires them both a lot! She wants to be a great leader just like Robyn, she’s kind of April’s role model!

Joanna is tol!aunt who gives the best advice and best hugs! She always goes to her for advice. Usually the first one April runs to when in trouble.

Honestly, Robyn’s naked fear and vulnerability when Watts gets dragged out–that visible realization of exactly how little protection they have anymore–adds a whole new layer to how fast she jumped on a grenade for Qrow the next time we see her.

Like, in our first check-in with Robyn, she’s pacing, she’s ranting, she’s scared but mostly furious. Pure, unfiltered Robyn Hill, no reason to hold anything back now.

And then Watts gets a rifle butt to the face and is dragged off without a word.

And then he’s brought back having visibly been tortured.

And in the interim, Robyn has shifted gears. In part to try to get through to Qrow, yes, but…it’s also a front that we’ve seen her use before in the face of the enemy. It’s the “Clover! Maybe you can help me understand…” voice. It’s “Are you lost?” “Now where’s the fun in that?” It’s a facade. A smirk and a taunt to hide what she’s really feeling, to get under her opponent’s skin, to help her wheedle out the truth while any external barbs just glance off that mask like water off a duck’s back. Banter rather than debate.

(We see her lower that mask intentionally, show Qrow the same earnestness and genuine vulnerability that she showed in her election-night address; very deliberately setting aside the front, just for a moment, to share her real feelings. The Robyn Hill Comedy Hour wasn’t just to keep morale up; it’s how she operates in the field. While she’s under threat.)

Watts gets brought back, clearly having been tortured…and without missing a beat, the first thing Harriet does is approach the next cell with intent, and start in on Qrow.

It’s not because she’s not afraid or, despite comments I’ve made in the past, because she doesn’t realize the danger. She knows. She’s known for a while.

She fires up the cocky smirk and the sarcasm and deliberately drags Harriet’s attention onto herself anyway.

#RWBY spoilers, #RWBY v8, #robyn hill, #am I saying Harriet intended to torture Qrow? nah, #I don't believe that for a minute, #doesn't change the significance of what ROBYN saw though
227 notes · See All
mylordshesacactusPhoto

Listen, I know we all make shitposts to cope and all–me too–but like.

THIS is Robyn’s immediate reaction to Watts getting pistolwipped and dragged out of his cell.

Joking aside–this is not the face of a woman who takes any pleasure or vindication in what she knows damn well is about to happen. This is a woman who’s been opposing Atlesian tyranny for years, who’s personally suffered (remember when Ironwood tried to kidnap her off the street without a warrant?) from the complete lack of real oversight with which the Atlas military operates.

That’s not just surprise, and it’s certainly not “well at least I got to see that bastard get the shit kicked out of him before I die,” not that any of us actually MEANT that when we said it. 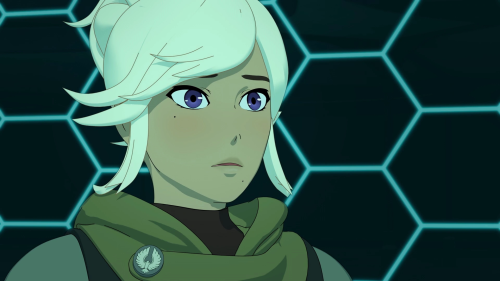 #RWBY spoilers, #RWBY v8, #robyn hill, #that's Robyn having had it confirmed that this is not an arrest, #they're being disappeared, #and they ARE going to be tortured, #and/or executed under the guise of the Grimm attacks, #this is like, #the moment Robyn has it confirmed that this facility is..., #less a military prison and more a CIA black site
205 notes · See All
issacthebraveandgayText
#raven branwen, #qrow branwen, #rwby, #rwby volume 7, #robyn hill, #duck the great western engine, #thomas the tank engine
27 notes · See All
flightofaqrowText

With all the color scheme discussion I saw going around yesterday, and playing around with colors between blogs, I realized and wanted to visit something:

Qrow and Raven did not necessarily have mementos of each other, but had exactly matching color schemes. Ruby eventually took these colors on, too, in her idolization of Qrow and some shared with her mother.

Qrow’s volume 7 outfit departs from this color scheme, though. He gains some more earthy neutrals instead of pure monochrome with the red accent. Perhaps illustrating some of the identity separation now present of himself from both Ruby and Raven?

…and, though unintentional for his part at the time, shares a lot more in common with someone else.

This also seems like a good place to comment on the sleeve designs. We see the organic looking swirls that seem to represent Ozpin? I haven’t noticed for all of the inner circle, but Harbinger has them. Due Process has them. Long Memory has them. Qrow’s now also have his own emblem as “leaves” within the spirals, though.

I think this shows that he hasn’t completely shunned Oz or his beliefs, but along with one of the themes of Volume 7 - he has made them his own.

Not even gonna lie if Harriet had accepted Robyn’s offer sure she would’ve seen Tyrian kill Clover, but she wouldn’t have seen that it was entirely Robyn’s fault in the first place lmao

One thing that a lot of viewers seem to forget is that Robyn knows Clover better than they do. They’re about the same age, so they were probably in Atlas Academy together. They address each other by their first names. Robyn is obviously familiar enough to actually bother asking him for information about Amity and to tag that he’s lying without needing her Semblance or any obvious tells. She had no issue with working with him when Tyrian is taken down, she avoided fighting him in the tundra when they first met onscreen, and she’s obviously not happy when he dies. They may get comparatively little screen time together, but what’s there and what’s implied gives the definite impression that they know each other and their relationship is more ambivalent than hostile.

So when she analyzes the situation and decides that the best course of action is to pull a bow on him, load it when he makes clear he is going to go along with Ironwood’s orders, and then fire when he pulls out his weapon, it’s not some hair trigger reaction. It’s her running the numbers on what she knows about Clover and concluding that he’s a threat to her and Qrow and she cannot trust his word that she’ll be safe in Atlas. Which isn’t even an implication, because (as the creator commentary notes) the first thing we see him do with Robyn is lie to her face.

And she was right to. Because for some reason, even though “only Qrow was under arrest”, the Atlas team sent out to rendezvous with them arrested her on sight.

#robyn hill, #rwby analysis, #clover ebi, #this was made in honor of that one comment that said robyn should have kneecapped him outright
318 notes · See All
assassinnumber9Text

Robyn: Have you been sulking in your room for the past two weeks???

Clover: What?! Excuse me, but I am the captain of the general’s hand picked Ace Operatives. What would make you even consider that I of all people would sit in my room sulking??!!

Qrow: Clover, you are literally watching daytime television on a Monday…while sitting naked in your bed.

Clover: …You may have a point.

#rwby, #qrow branwen, #clover ebi, #robyn hill, #i feel like clover is just like always offended when someone thinks he's doing something that's not useful, #qrow and robyn are just like please at least put on some underwear, #dont worry he has a blanket covering his goods, #but qrow be denying that he wants to join, #incorrect rwby quotes
10 notes · See All
fionathechaoticsheepText

Joanna, on two hours of sleep; The twins have a mix of mine and Fionas chaotic energy…

Robyn whispering to her baby daughter; Please stay calm for me….

I love how Team Birds In Bird Jail Which Is For Birds is literally the ONLY plotline where I have ANY idea what’s going to happen.

#rwby, #robyn hill, #qrow branwen, #rwby spoilers, #and even then it's only in the sense of ''marrow lets them out''
166 notes · See All
helionisPhoto

I am all here for Emo Qrow 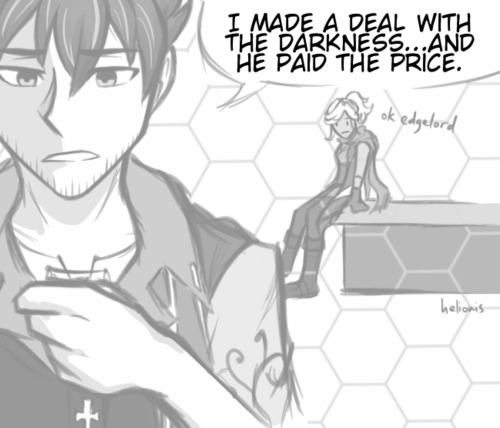 Robyn “started the fight” sure, because participating in a military coup by attempting to blackbag a potential threat who you know is innocent isn’t profoundly illegal. If Weiss can arrest her father on her authority as a Huntress, then Robyn can and should arrest Clover as an accomplice to Ironwood’s crime.

Robyn has yet to do anything truly illegal in the show and people just can’t accept that, because they think being lawful is just obeying people “better” than you, not adhering to law and justice.

#robyn hill, #ironwood has been repeatedly and consistantly abusing his power to break laws and get away with it, #that's the fucking point, #he's not lawful, #that should have been clear the moment robyn told us the supplies for Amity were stolen
256 notes · See All
5by5brittanaPhoto

#Robyn Hill, #RWBY, #*, #my real shit, #RWBY Spoilers, #She was talking about Winter, #Come clown with me 🤡
188 notes · See All
happy-huntressesText 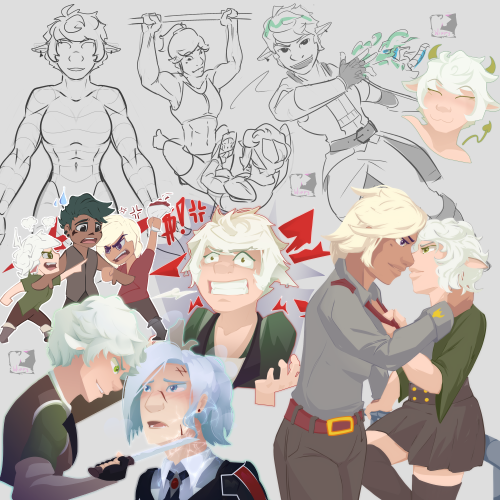 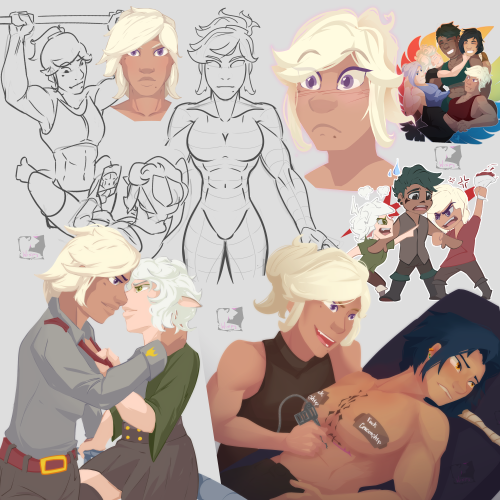 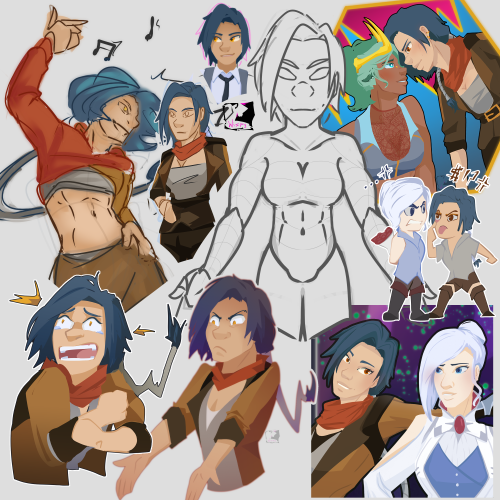 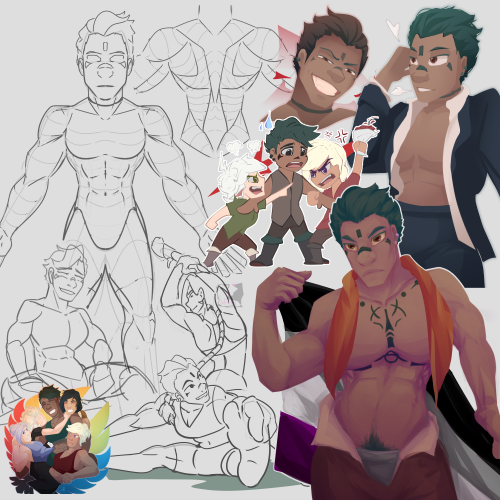 Robyn: I had an 87 year old lady threaten to “kick me in the pussy” and it was one of my greater achievements in this life.