simonf54: Queen on the set of Radio Ga Ga. BTS This shows you the epic size of what the boys did for their productions. That’s David Mallet behind the camera checking his shot before the DoP and focus puller shot the real take. Those cranes were huge and heavy a bit like a TRex might of bin🤣. You can just see John looking through the skates if you look carefully. 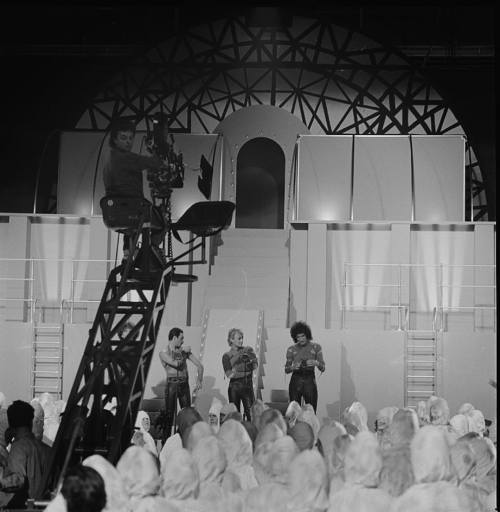 How normal kids discovered We Will Rock You

*just randomly listens to the song*

How German Kids discovered We Will Rock You

summary: you’re divorced with queen’s roger taylor due to constant cheating and irrational behaviour towards you. but u have one person in common: your daughter, Laura aka your favourite human on earth. Your marriage with roger had its ups and downs but laura was the happiness in it. Now that she’s 8 and starts to realise how your terms with roger are, you finally tell her that you’re seeing another man except her father and she took it really warmly. She seemed excited to meet the new man unlikely your ex husband who accidentally learns about it by Laura, the weekend you would leave her at his place: on weekends you had some cute getaways with R/N because the court decided that Laura could stay or visit her dad on weekends and stay with him for five days each Christmas and easter vacations. On summers he has the right to be with her for two weeks.

warnings: some tense in the middle hehe and woman talk.

It was around seven in the morning. Your head was dizzying and took you ages to get out of bed after blaming the wine for the headache you’re feeling now. Roger was a sleepy angel with his blonde messy hair and his back covering his bedside. You had to fix and prepare yourself for work. It’s nice going to work from Tuesday to Friday but the work you put in within these eight hours as an accountant in the bank, is exhausting.

“Roger, I have to go…” you knell next to him, softly playing with his hair. His face was turned against yours, you could see him sleeping deeply. What a cutie he was.

“Mmm?” He asked on his sleep, without being aware of what you said.

send me requests !! i write for queen, led zeppelin & some others! (message me or send an ask if you want a full list of everyone i write for!) requests for blurbs/oneshots are ALWAYS welcome and i’ll always take a look into them! send them my way, i’m in a mood to write :)

Sometimes I have to sit back and remember and appreciate just how strong Freddie Mercury was.

Just imagine having to come to terms with your own mortality. Knowing that you really don’t have much time left, and every second that goes by is another second gone of the little time that you have. Every day continues a steady march toward the finish line that is… uncomfortably close, to say the least.

But it seemed like he was okay with that. Or at least, he didn’t let it get to him all that much. He didn’t mope around, he never really complained about it. And he was never crushed under the pressure of it all, and I think most us probably would be. Instead, he decided to live the rest of his life to the fullest. To make every last moment count as much as it possibly could.

To have the sheer strength and bravery needed to literally cope with your own impending death. Others go through the same thing every day, he definitely wasn’t alone. And those people deserve all the respect the world can offer. Because just… wow.

And not only that, he was also brave enough to identify as homosexual in a world that wasn’t ready for it yet. You have to remember that this was a time when homosexuality was still listed as a mental disorder. A psychological defect. Even if he did keep it considerably hidden, (there is nothing wrong with being in the closet btw, it’s all about what the individual is comfortable with) you still have to give him IMMENSE credit for even stepping into that territory, which was a risky move.

Conclusion: Freddie was probably one of the strongest and bravest people who have ever existed.

Reblog if you agree. ❤️

Imagine the view from down there 🥵

Roger in a white jumpsuit ruined my life.

#roger taylor, #jumpsuit confirmed, #there’s no hem for a shirt and the curve of the zip goes around the crotch
39 notes · See All
bohemianbriText

Yo can anyone teach me how to make a masterlist?

is this kinda fucked up,

or is it just quarantine

caught in a face mask,

no escape from anxiety.

Even more DD because no one can stop me

omg!!! i did it, hope you like it!! thank you @johnricharddeacy for making a request, i hope i didn’t dissappoint!

“Love” he muttered. “y/n, baby, listen to me”, roger tried to reason with you. “it’s okay roggie, i understand if you don’t want to go” you replied. “it’s not that i don’t wanna go” he said, “it’s that i’m worried about the impression i leave on them. what if they don’t like me? what if they judge me by my past relationships and make you hate me?” he sighed.

“rog”, you said, “no friend, no person on this world would make me hate or leave you. you know that i love you, and nothing will change that!”

you were talking about making it official, after 2 months of dating, now you want rog to meet your friends. but he is worried, they might not like him, they might think he isn’t good enough for you. so many bad thoughts were running around his mind, but he remembered your words, that, no matter what, no friend could ever make you leave him. he knew you loved him. ofcourse you did. he was smart, kind, beautiful inside and out. what more could you ask for?

you were meeting your friends, jess, tasha and avelyn at the local restaurant. ofcourse, it was a fancy one, and roger paid for it, because he didn’t want you to feel bad.

“y/n!!!”, avelyn, the youngest of the three yelled. she ran up and hugged you. she was always the cheerful youghtful soul she still is. you had a feeling she would like roger.

“avelyn, hi!” you hugged her back, “guys, this is roger” you introduced him to her and the two girls that were sitting at the table. “rogah taylah” he put his arm out to greet them, but only avelyn greeted him back. jess and tasha ignored him and rolled their eyes in unison. “tash” you hissed.

“so what would you girls like to eat?” roger questioned, ignoring the awkwardness beetween the 3 of you. “i don’t know, y/n, is your lovely boyfriend paying for all of this?” “yes” “hm, i see, well, where does he work?” “tash-” you warned her. “oh right, he’s playing in some childish band, what was it called, prince?” “queen”, roger talked back, clearly offended by tasha’s meaniness. “so roger, how long have you two be seeing each other?” jess interrupted the awkward sielence. she obviously didn’t like roger too, but was willing to give him a chance.

“around 2 months” he replied. “around?! do you even love her, you bastard?” tasha interrupted. “hey, calm down!” avelyn said, but before she could finish tasha got up and said: “in these ”around“ 2 months, have you been seeing only her or have you been whoring around like the womanizer you are?” she snarled “because i remember seeing you with some other girl. what was her name, clover?” “clare” you said.

“y/n, for fuck’s sake, you know about this and let him do whatever he wants to?”

“yes tasha, i actually do. because clare is much nicer person and she is more of my friend than you will ever be. infact, she is rog’s sister.”

everyone gasped. a wave of awkward sielence passed, tasha got up, face red, ‘cause of anger or embarrassment? and she left without saying another word.

“well that was fun” jess stated. “roger, dear, i’m sorry for her behaviour, i don’t know why she’s like that”

“no worries, i got used to it already” “roggie, baby, i’m so so so sorry, now i understand why you didn’t want to go-” “no, y/n, don’t apologise. it’s not your fault she’s a bitch she is. i love you so much, no trish or tasha could ever question that” he whispered before kissing you

a/n: this is the shortest time i managed to write a chapter. there are some new characters introduced that will also be mentioned in future chapters. also there’s some drama in this that i think is going to be good. it’s a little shorter than what i originally had planned because i had to take some stuff out but i still hope it’s good

summary: when their two best friends die, it’s up to ben and y/n to take of their goddaughter and the challenges that come with it.

a month has passed and so far everything has gone smoothly. ben and y/n have figured out how to work around their schedules.  most of the time she had charlie because ben was filming but whenever he wasn’t, he was with her. they moved in and ben had brought frankie with him. at first they were a little hesitant about how she would act around charlie and vice versa but now frankie had become her protector. whenever charlie was napping, frankie would be with her. sean was another problem. he didn’t like the idea of y/n living with ben but he had managed to forget about it because he knew he had her wrapped around his finger by acting like the perfect gentleman and changing his attitude.

they had spent the next month planning the funeral and the only date they managed to get was one the 1 year anniversary of christian and lennon’s wedding or else they had to wait another few months until august and y/n didn’t want to wait that long because she didn’t know if ben would still be filming or if he were going to be taking break. ben advised her to go with it. she had never been more stressed in her life to the point where she falls asleep at random places. ben had noticed her behavior and advised her that she should go see a therapist. she didn’t want to. she didn’t want to talk to anyone about how she feels let alone a stranger, he understood where she was coming from but still encouraged her to go. he couldn’t say the same for him, he did have his bad days and did hide his emotions often.

now y/n was in her room putting finishing touches on charlie. they knew that taking a baby to see their own parents funeral wasn’t the best idea or the right one, but they had no choice. ben was in the bathroom fixing his tie, or at least trying to before getting frustrated and throwing it off and putting his hands on the sink counter. Knowing he needed to calm down, he went downstairs to get some water. on his way he saw her with charlie in her lap rocking her back and forth as charlie played with the ends of her dress. she felt someone staring at her and picked up her head to find ben staring at the both of them