Virgil: Are you alright, Ro?

Roman: Yes of course, thank you so much for the gift! But why?

Virgil: What do you mean why? It’s out anniversary.

Virgil: Did you forget?

Roman: Of course not! I’m just going to Target and Hot Topic ironically.

Janus: Why would you do it? You know the consequences.

Virgil: I guess you just don’t know people as well as you think you do. You miscalculated. I love Roman, more than I fear you.

Janus: …No, you miscalculated! You should have feared me more!

So, quick little description of this : The two - Roman and Virgil - are secretly dating. Not because the skateboarders and nerds don’t get along well - it’s the opposite really, they are all good friends - but because of the ‘I told you so’s they would be getting. Virgil with his friends (the skateboarders) who constantly tease him about the cute nerd being his 'type’ while Virgil just denies this even though he TOTALLY has a huge crush on the cute nerd. Roman on the other hand just gushes about the hot skateboarder in purple, telling his friends (the nerds) how the boy 'is super cute’ and 'his type in general’ but the thing is, Roman doesn’t believe that Virgil would like him back. His friends though say otherwise - that Virgil constantly stares at Roman and likes him back also - Roman is doubtful though so denies it every time. So when they are TOGETHER, they decided to mutually keep it a secret so that Virgil doesn’t have to face all the 'I told you so!’ and the 'see, dude?!’s he KNOWS he would be getting once he tells his friends and so that Roman doesn’t have to go through the teasing ALL OVER AGAIN and the practical embarrassment to have Virgil know about all his 'gushes’ he told his friends.

[WILL HOPEFULLY MAKE THIS A BOOK IN THE BEAR FUTURE! MAYBE THOUGH?? IF I EVER REMEMBER!!]

✨Return of the Jams✨ Spoilers!!

I ABSOLUTELY love the whole episode and it has given me motivation to do these!! I love them so much💕

Roman: great news. Be prepared to thank me big time

Virgil: what have you done now?

Virgil is a kiss thief. When he wants a kiss he wants one; with consent obviously.

If Roman is working on something at his desk Virgil will pull his chair out and sit on his lap int I’m he gets a kiss.

If they are watching a movie or just hanging out Virgil will kiss Roman’s hand.

Have a doodle dump cause I’m too sick to do anything else :))

So Virgil is Anxiety, we all know this. And Virgil has a crush on Roman (it’s Requited but he thinks that couldn’t ever be true). And what do people do when they have a crush on a good friend? Start acting totally weird. So everytime Virgil is near Roman, his eyeshadow like doubles, because he’s really nervous about acting really odd and creeping out Roman. And Roman (with, get this, lots of miscommunication) thinks the eyeshadow is because Virgil is scared of him or something. But they end up sorting everything out, being cute and yay they’ll have the beautiful relationship never destined to be experienced be me

I’m basic don’t hate me I love some miscommunication

So…. I heard you wanted more of Roman and his EMO-tional support?

Virgil, Remus, and Janus are really bad at remembering dates, why? It’s a dark side thing, I don’t know

It’s February 13th and they are hanging out on the couch with their boyfriends. Patton wanted to know what Janus got him, Roman was talking about how whatever anyone got it wouldn’t get as good as Virgil’s gift to him, and Logan was going on about how Valentine’s Day is stupid, meaning he loved it.

It’s now 10:03pm on February 13th and Virgil, Remus, and Janus are zooming to Target in hopes of not completely disappointing their boyfriends.

Janus got a bunch of Squishmallows for Patton to add to his collection.

Remus got a bunch of books and paint by numbers.

Also an engagement ring box because he was going to propose with Roman’s favorite candy. The ring he ordered was put on back order and he forgot so improv as needed, which he needed too.

I’m sick :)) but managed to pull through. So please, have this.

I can’t with line art so have another unfinished piece.

Soulmate/Highschool AU, interpret this as you wish :))

Was supposed to be some animation but,,, then nuh.

May I present: Prinxiety sleepy cuddles because yes.

Also: I have been inactive for a while because I’m working on an AU, featuring the sides, and I hope to get it out by the 13th of February, so stay tuned!! 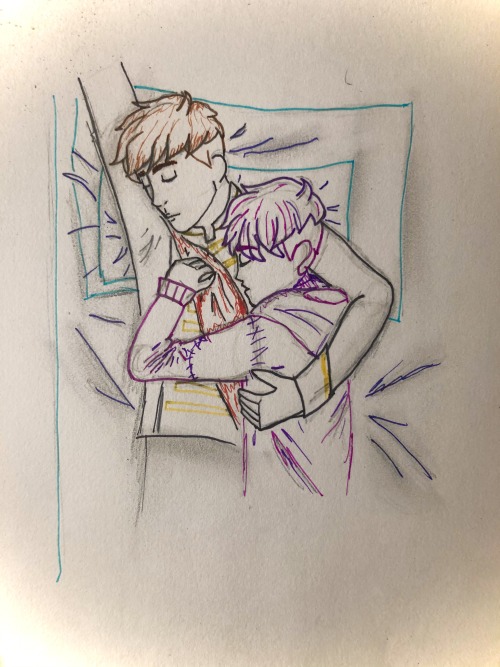 Sometimes I just want to grab you by the shirt and shout at your face how much I like you. Damnit.

I’m aliveeee and this is my second attempt at posting this :)) tumblr hate some apparently :P)) I’m doing a baby sides and babysitter virge piece, I am just waiting for my motivation to come back :))

*in Logan’s and Patton’s apartment*

Logan on his phone: *GASP* oh my god

Logan: no time to explain I have to go to Virgil

*At Virgil’s and Roman’s apartment*

Virgil: Roman I think someone is trying to break in

Roman: don’t worry just act like no ones here

Logan: they have it

Virgil while putting on two different shoes: no time to explain

*at the comic book store*

*Virgil and Logan fan girling about the new comic*

Roman: hello 911, yeah I think my boyfriend has been kidnapped