i know steve kloves didn’t do justice for hinny and romione, but think about the other canon ships like bleur, remadora, ginny and corner, etc. he was obsessed with making harmony canon that he completely ruined other ships, i don’t even think half the movie watchers know about ronks/remadora or micheal and ginny.

Ron took one last look in the bathroom mirror, hoping he was presentable enough for dinner tonight. It was stupid, really. He’d met the Grangers before. Spent loads of time with them in Australia, even. But this was the first time he’d been invited to Hermione’s childhood home, and he wanted to make a good ‘first’ impression.

His dad had helped him choose the outfit, mainly because Arthur wanted a chance to shop in a muggle clothing store. Harry was also there for moral support and to help with muggle money. Ron was dressed in khaki trousers and a light blue button-down that complimented his eyes. Knowing he needed to get going, he inhaled deeply in an attempt to settle his nerves and made his way down the stairs.

“Yeah, Mum. I won’t be out too late. Promise,” Ron reassured her.

She smiled lovingly at her youngest son. “I know. Before you go, I’ve been thinking about sweaters for the holidays this year. It’s about time Hermione receives one, don’t you think?”

Ron looked partially surprised, even though he should have known this was coming. “I’m sure she’ll appreciate not having to wear my old ones,” he agreed.

His mother chuckled. “I should have made one for her years ago, but money was—” she cut herself off as she shook her head. “That’s beside the point. What’s her favorite color?”

Ron opened his mouth to answer but froze. What was her favorite color? He knew what it wasn’t: no yellows, oranges, or reds. The question was bothering him. He’d known her for seven years. He could answer almost anything about her, yet he couldn’t answer this.

“I—I don’t know,” he said, completely perplexed. “I know she wears a lot of blue, but something tells me that’s not it. I’ll check tonight.”

Ron nodded as he walked out the door so he could apparate to her house. He turned on the spot and felt the familiar lurch in his stomach. Seconds later, he opened his eyes to find himself at the end of the lane near her home. He looked around, ensuring he wasn’t seen before making the short walk to her house.

He knocked on the front door, and Jean answered shortly thereafter. “Hi, Ron! Welcome!” she said cheerfully as she ushered him inside. “Hermione’s upstairs if you want to go get her. I believe she’s finishing up a letter. Second door on the right.”

Songfic based on “Paper” by LANY

She’d probably regret it for the rest of her life. But it was too late.

Hermione: So apparently I’m in love with Ron. I didn’t even realize it.

Hermione: I’m very offended that no one told me.

Ron: I mentioned it once or twice

Hermione: Absolutely no one, shocked and upset.

Hermione knows that there are very special in-between things, more than folklore, more than old wives’ tales. There are things that aren’t quite magic the way she knows magic, but certainly feel like it.

loosely inspired by a hilarious conversation I had with @skeptiquewrites where she said “it’s called Kinkuary, not Once a Week in the Dark with the Lights Off-uary” and I… kind of ran with that a little? anyway, Romione is v hard to write so I just went ahead and made it sweet

Rating some of the hp ships

- didn’t use to ship this

- too predictable and a bit boring tbh

- but all in all good vibes

- they are perfect for eachother

- bonus points because ron is a human croockshanks

- literally the moon and the stars

- yeah they are cute

- only happened because jk the terf rowling is a homophobe

- i love tonks and this ship just destroys them

- i would take a bullet in the head for teddy

- don’t hate them , but also not my fav ship

- WHY DO I SHIP THEM

- I STARTED IT AS A JOKE

- cute tho for some reason

- the only good thing that came out of cursed child

- they had more chemistry than any other canon hp  ship

Waking Up In Vegas
by Anonymous

Muggle!AU- Ron and Hermione wake up married in Vegas! Two parts for now, but it might turn into more ;).

Random headcannons I have about the next gen kids

Just a remainder to those dramione shippers who bash ron: It was Draco who called Hermione a mudblood and Ron who threw up slugs defending her💅🏻

Chapter 15, Love In A Time Of The Zombie Apocalypse by @andgladly 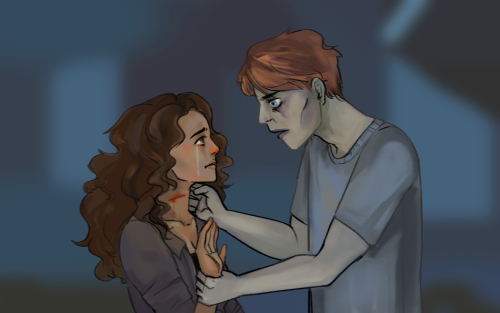 *ron and harry at grimmauld place after that piano moment*

Harry: I KNEW IT I KNEW YOU DIDNT NEED HER TO TEACH YOU

When did Ron and Hermione fall in love?

Thanks @folk-melody for the ask 💜

Oh wow, well I used to write fanfiction about 12 years ago for One Tree Hill (which I still adore!) And I definitely have a fic under an old penname that I never finished 😬

I’ve got lots of little plot bunnies running around in my head - all centered on Ron/Hermione from the HP universe - but the two I’m on track to post next are:

“Ten Years to You” (working title) - a “what-if” story that explores an alternate timeline of how Ron/Hermione might have found their way to each other following the Battle. Very angsty, but also quite a bit of fluff!

38). Weirdest story idea you’ve ever had.

Interesting question…I feel like I briefly considered writing a crackfic based on High School Musical waaaaay back in the day. That didn’t happen 🤣🤣🤣 nothing comes to mind recently though, but who knows what I’ll dream about in the future!

Oh man, that bloody haiku ask 😅 I’m surprised it took me this long to get a follow up ask. Or maybe I did get one and never wrote it. Or maybe I did write it? (Problems of writing so much that I can’t keep track anymore)

Regardless, here’s a Post War sequel for you! Hope you enjoy!

If anyone’s looking for part 1, you can find it here

“Hermione, look what I found!” Ginny came barging into Ron’s room with a paper in hand.

Ginny shoved the paper in her face, but refused to give it to her. As soon as she watched the realization dawn on Hermione’s face, she pulled the paper back and clutched it to her chest.

“No! Ginny, give it to me! I need to burn it!” Hermione pleaded desperately.

“What is it?” Ron asked, as he and Harry eyed them carefully.

“So, remember how I wrote Harry that Valentine’s poem back in first year that none of you will ever let me forget?” Ginny asked.

Both boys nodded as they erupted into fits of laughter. Hermione’s face had grown red.

“Well, I managed to get Hermione to write her own the summer before sixth year!” Ginny cackled.

Harry laughed even harder, but Ron froze and stared at Hermione. “What?”

“Haikus have three lines. The first and third lines have five syllables each, the second has seven. It doesn’t have to rhyme,” Harry clarified.

Ginny was impressed that Harry knew that. Noticing Ron’s curiosity, she turned her eyes back to the paper. “His smile’s perfection, red hair and freckles galore, matches his blue eyes.”

Ginny and Harry both dissolved into laughter once more. “Things—would have been—so much—easier—if you’d seen that—two years ago,” Harry wheezed.

“You are the worst,” Hermione groaned. She couldn’t bring herself to look at Ron.

Ron’s face was just as red as Hermione’s, though a goofy grin was playing at his lips. “I don’t know. I kinda like it.”

“I do. It’s bloody awful, but it’s still my very own love letter,” he laughed as Hermione reached for one of Harry’s pillows to throw at him.

Ron caught it with ease, thanks to his former skills as Keeper, and tossed it aside. He leaned forward and pulled her to him. “Who said I was lying?” he asked as he wrapped his arms around her and drew her in for a snog.

“Ew, gross!” Ginny said as she faked retching noises. “Let’s get out of here, Harry!”

“Right behind you!” Harry said as they left the new couple on their own.

“I’m gonna frame that,” Ron said against her lips.

“No, you will not!” Hermione protested.

“You can’t stop me,” he said mischievously.

Hermione rolled her eyes. “Well, it’s not like much has changed.”

“Just the fact we survived a bloody war and got things sorted,” Ron said as if it was an ordinary task. “And now my, er, what’d you call it? Oh, yeah! My smile, red hair, freckles, and blue eyes are all yours.”

Hermione couldn’t help but smile at his words. They sure were.

Ron: Why must you always attack me with words?

Hermione: Would you like me to start using rocks?

I feel like even without the movies there would be people especially harmione shippers who would hate on ron. Like, i know movies contributed to most of the hate but i think people also have that stupid mentality of ‘theres always that 1 useless guy in the group’ or ‘the main character ends up with girl bestie’.

Ron Weasley with eyeliner on, Hermione painting his nails while listening to music.

Seriously… What the legit FUCK