Ron Swanson in a tuxedo. He looks like he could be the next James Bond

When your friend asks you for relationship advice

Literally me at any given moment

I’ve now got two different villagers with the same name, but one is spelled Tammy and the other is spelled Tammi, completely by chance. I should dress up my character like Ron Swanson.

I was today year’s old when I found out that Megan Mullally and Nick Offerman are married in real life. It just makes me want to rewatch all Ron and Tammy 2 scenes.

Watching Parks & Rec now… I can’t decide if Ron Swanson or Jim Hopper would win in a ‘stache duel.

I feel Hop gets extra powers from that button-up while Swason gets it from his well-coiffed hair.

Has anyone written an analysis of these ‘staches? I feel like this would be the battle of the century.

When you are reminded to stay six feet away from others …

“It’s not that im a sore-loser it’s just that I prefer to win and when I don’t I get furious.” 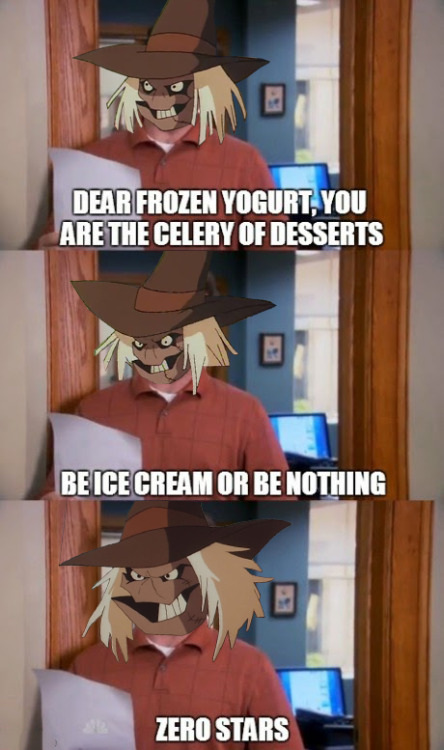 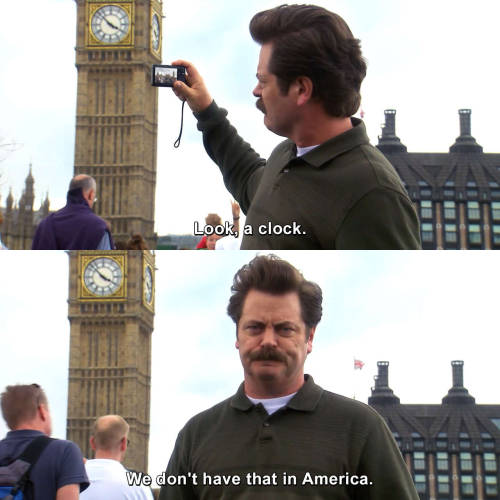 ‪Ron Swanson and Raymond Holt have such similar yet opposite energies‬

Ron is blunt, smart and emotionally detached He prefers to be alone and often finds the demands of others to be pointless, which is why he often ignores citizen requests and allows Leslie to jump in and solve their problems. He is reluctant to show his true feelings to others and as a way of avoiding personal conversations, stays hidden away in his own office.

At his best, Ron becomes more open and receptive of the feelings of others. His relationship with April shows growth as he appreciates her and in his own way tries to be supportive of her and Andy. At his worst, Ron is rude and aggressive. He makes it very clear to others that he thinks they are not worth his time.

Ron is extremely closed off and private, so he doesn’t readily share aspects of his personal life and upbringing with his coworkers. However, it can be seen that he had an interesting childhood and was expected to act maturely and work from a very young age. Due to this he has taken on a mentality that he needs to be self-sufficient and he doesn’t want to rely on anyone else for anything. He likes to be in control of himself and others as can be seen from his managerial style.

Ron has a number of strong qualities of type 5 including his introversion and need for privacy. However, I think that he is more concerned with being self-sufficient and strong than with finding knowledge and appearing useful and competent. It can be seen through his interactions with others that he is more of an 8 as he respects people who are self-made, despises weak people or entitled people and is not concerned with how others view how he does his job.

Ron has many hidden talents that he is reluctant to share with his coworkers as he feels this will make them see him differently. He is a relatively well-known Jazz artist (Duke Silver) but hides this from the people he works with as he thinks they will see him as being less masculine and strong. When April finds out about it, it becomes a secret that they share and strengthens the bond between the two of them.

Despite being very forthright and unafraid of telling people what he thinks of them, Ron has a very interesting dynamic with the women in his life. When his mother and Ex-wife Tammy are shown through the series, it can be seen that Ron seeks their approval, even though he knows they are unhealthy for him. This is because he reverts back to a time when he was a child and wasn’t in control.

Ron has a 9 wing as he is much more withdrawn, introspective and seeks the pleasures of comforts such as woodworking and food.

Some quotes to describe Ron’s motivation:

“Fishing relaxes me. It’s like yoga, except I still get to kill something.”

“The less I know about other people’s affairs, the happier I am. I’m not interested in caring about people. I once worked with a guy for three years and never learned his name. Best friend I ever had. We still never talk sometimes.”

“When I eat, it is the food that is scared.”

“Under my tutelage, you will grow from boys to men. From men into gladiators. And from gladiators into Swansons.”

“I’ve cried twice in my life. Once when I was 7 and hit by a school bus. And then again when I heard that Li’l Sebastian had passed.”

“When people get too chummy with me, I like to call them by the wrong name to let them know I don’t really care about them.”

“I’d wish you the best of luck but I believe luck is a concept created by the weak to explain their failures.”

“My idea of a perfect government is one guy who sits in a small room at a desk, and the only thing he’s allowed to decide is who to nuke. The man is chosen based on some kind of IQ test, and maybe also a physical tournament, like a decathlon. And women are brought to him, maybe… when he desires them.”