Toothless’ expressions in the background kill me - his offense at Snotlout’s suggestion that Hiccup might die, his smirk when Hiccup offers to be the one to rescue Fishlegs while Snotlout distracts the dragons instead of the other way around.

Hey! He did use Snotlout’s idea of just telling the leader that they’re friends of dragons, in the end!

Personally, would have preferred it if it was an Astrid/Ruffnut team up. Grrl power and all that, only unironically. Like, just do it all the same but switch the twins, no need to change anything else.

“Why does he always have to make such a production out of everything? I really hate that guy.” paired up with the quiet, to himself way he says it is hilarious.

No, seriously, why did they say they only had one flying dragon before? Is it because only Tuff was there?

Wanna play a game called “Explain Johann’s reaction in the context of the future reveal that he’s a spy even though it’s almost impossible”? In this case, he looks worried and afraid when he’s left alone at the Edge at the end of the ep. I’ll start: although it would be the perfect time to have a look around the Edge for weaknesses and secrets, he is surrounded by dragons who might attack him, included the wild pack, as far as he knows, if they see him do anything untoward, plus, he doesn’t know if the teens might be listening to him from somewhere he can’t see.

Moments Hiccup should have been allowed to say fuck, Edge of Disaster edition, special two-parter edition:

I don’t think he gets a “fuck” this ep. He’s either too chill or too focused. Even when they see Fishlegs with the wild dragons, I don’t get the impulse to say “fuck” from him.

Special Astrid and Ruffnut edition: They’d both say fuck you to each other. Ruff would probably also tell Astrid to fuck off. She and Tuff would call Astrid a fucker behind her back. Astrid might say “what the fuck” at the twins’ antics, either in frustration or confusion, but she seems too composed as a person to do that.

When Fishlegs yells and draws every dragon’s attention to them. When the dragons have him against the edge of the cliffside.

Moments Hiccup should have been allowed to say fuck, The Zippleback Experience edition:

You know the one I made about Gone Gustav Gone? Yeah.

When he saw the fish in his hut. When Barch knocked him off of Toothless. When they were found in the cave. When Gobber told him about the life-debt. Both times their plans didn’t work. Should have told “fuck off” to Snotlout. When he was kidnapped. When he saw who kidnapped him. You know what he was going to say when he was cut off when Barch appeared. When Ryker attacked him (although he may not have had the breath for it. When the twins and Toothless knocked him and Barch over. “Can you tell this fucking lunatic that it’s over?!”

Special twins edition: Every time a plan failed. Might have used it when talking about Hiccup as a noun, adjective… you know the drill.

Special Snotlout edition: You know when.

Moments Hiccup should have been allowed to say fuck, Snotlout Gets The Axe edition:

When he found out he’d have to go to the wedding. (Started early this ep.)

Special Snotlout edition: When he dropped the axe. Interestingly enough, while in most episodes he looks like he’d like to swear all the time, in this one, all of that “fuck” energy got concentrated into one big moment, with a few more scattered around there, like when he found out he was stepping on a dragon. Furthermore, he also didn’t have an opportunity to want to swear at one of Hiccup’s screwball plans, since he was too busy carrying out his own.

Special Astrid edition: When she found out she’d have to go to the wedding. Also, “fuck you” to Snotlout. At some point. Probably. I’m betting on it, I don’t even need to look at it.

Moments Hiccup should have been allowed to say fuck, Night of the Hunters edition, special edition for being a two parter:

When Ryker captured Astrid and Fishlegs. Meaning, that’s when he starts.

Special gang edition: when Heather says she’s with the Hunters.

When the Screaming Death caught them inside its cave.

Special Astrid edition: she’d say “fuck you” to Heather. And to Tuffnut. (That’s usually the “fuck” I give her.)

Special Tuffnut edition: when he stepped on the trap.

Special gang edition: “well, fuck” when Ruffnut tells them what she did.

[skipping stones on a pond]

Fishlegs: It’s such a beautiful evening.

Second chapter of my Dagcup Mermaid AU is out on AO3 and here’s an ilustration I made for it.

Hiccup took a few steps forward and was pretty surprised by what he saw. The tiny beach was full of small, round and colorful pebbles. The sea water was crystal clear, the waves were quietly washing the rocks on the beach and the whole place was really neat. In the middle of it all, there was a wooden pier coming out of the water. The whole place was surrounded by trees with loose branches full of leaves and together with the slightly orange and pink sky and the sun that was about to set, it created this great spectacle. -
“Wow…” Hiccup breathed in amazement and looked over his shoulder at the other guy. “I didn’t expect for it to look like this.”

Dagur chuckled with a pleased smile. “That’s why I took you here.” 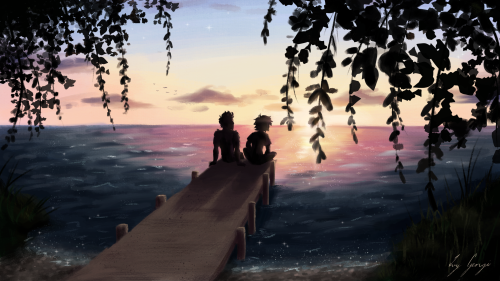 also rare pair bingo is still going!!! I’m so close to a bingo jsut gotta get my butt into gear. im stressing about influence, and appropriateness of how i write adult-esque topics!!!!

stranded in a storm together / tuffstrid, 2k words

That last scene with the Speed Stinger left me feeling like that gif where a woman holds out her hand while gesturing and a dog tries to give her its paw, but she moves it away at the last second so it falls down.

#rtte, #Race to the Edge, #httyd, #httyd liveblogging, #liveblogging, #Hiccup Haddock, #The Next Big Sting, #heartless hiccup, #give him a pet for the road
1 notes · See All
koalas-koalas-everywhereText

Moments Hiccup should have been allowed to say fuck, The Next Big Sting edition:

Special Ruffnut edition: during every interaction with the Speed Stinger.

#rtte, #Race to the Edge, #httyd, #httyd liveblogging, #liveblogging, #Hiccup Haddock, #Moments Hiccup should have been allowed to say fuck, #Ruffnut Thorston, #The Next Big Sting
3 notes · See All
koalas-koalas-everywhereText

Moments Hiccup should have been allowed to say fuck, Have Dragon Will Travel, double edition (one per ep):

When he saw that tree coming at him.

When he saw his dad’s seal on the horn might be a moment, although I think it would go more like “wtf”, which is the kind of thing I I said wouldn’t count. When he found out whose daughter (and whose sister) Heather was, definitely.

Heather, watching the news: Some idiot tried to fight a squid at an aquarium.

Dagur, covered in ink: Maybe the squid was being a dick.

Moments Hiccup should have been allowed to say fuck, Quake, Rattle and Roll edition:

When that boulder started rolling uphill.

I… don’t understand how or why that worked. In-universe. Like, clearly it worked because it had to work so the writers made it work, but I don’t understand how that worked in-universe. It’s implied the Gronckles were there first, so the Quaken went in expecting a fight. If not, then the Gronckles attacked because they saw it as a threat (unlikely, since they point out earlier that Gronckles are usually friendly, but let’s assume for a moment), but why did the Quaken not get scared when they came back, then? As far as it knew, everyone but Fishlegs and Meatlug were dangerous. And how did a stand-off with Meatlug make it assume she wasn’t a threat?

“Bring you face. And prepare to be rubbed.” Well, finding out what it actually was might have been either a relief or disappointing.

Also, pffffft, Snotlout’s disappointment in the background when Hiccup stopped the twins’ fight.

I think Grimmel was a larger threat than the Grimborn brothers, though he was hardly as impressive as them. I liked Viggo’s intelligence and ego, liked how he thought everything was a game. However, Grimmel was able to sneak onto Berk and into Hiccup’s house with no one noticing. Grimmel could have killed Hiccup then and there if he wanted to. His sneakiness reminds me of an assassin. The worst Viggo did to Berk was attempt (and nearly succeed) to starve them out. Grimmel made them completely up and leave their home!

So, hm, now that I think about it, I can’t say who was a bigger threat, as they were threats to Hiccup and Berk all in their own ways.

I liked Grimmel as a villain, much more than Drago. Grimmel has more backstory, more character and personality. It was definitely a huge help that he had scenes without the protagonists. That helped build him a lot.

Viggo, on the other hand, is even more fleshed out. His motives are clear, even if his methods of getting to them are not. In my opinion, Viggo was the better villain.

Fishlegs: Synonyms are weird because if you invite someone to your cottage in the forest, that sounds nice and cozy, but if I invite you to my cabin in the woods, you’re going to die.

Tuffnut: My favourite is “butt dial” vs “booty call”

Ruffnut: Mine is “forgive me father, for I have sinned” vs “sorry daddy, I’ve been naughty”