#bbc ghosts, #idiots assemble, #why would you ask about this i thought this was like the number one rj, #rule of fandom, #idiot post, #video
53 notes · See All
the-memoirsofa-madmanText

If you’re not prepared to lose a war, NEVER insult someone else’s  favorite character/OTP/headcanon.

Hello everyone! I’ve cleared up my to-do list (a little part of it), but I would like some new ideas that could give me some much needed inspiration (which dissolved as soon as school started)!

With this said, REQUESTS ARE OPEN!

You can find a prompt list in my description, you can request max.2 prompts per piece!

If you can’t find your fandom in the list, or just would like to know if I write for a specific character, just ask!

3. You respect the things we do canon.

4. We never NOT reblog the content of your d&d stans

5 and last: We reply the rants of the stans when someone replays d&d book 1 and yell at PB for the garbage they did with book 3.

He takes care of his drunk girls

His sisters are nosy AF

He will flirt with your OC/MC at some point

Has swoonworthy phrases for everything

Is Chanevi’s #1 stan I don’t make the rules

If it’s a modern!sinclaire he will lurk accompany you everywhere he can

He is a big bookworm

Modern! Annabelle is out and is always like “sigh, straight people are so complex. Ugh don’t kiss in front of me! My eyes” in a teasing manner

Flirty to the CORE but we love it ok?!

Can be an old-fashioned romantic

IF SHE HAS KIDS SHE’LL ALWAYS HAVE AT LEAST ONE GIRL!!!

100% swoons over guys like Harry Styles and moans “WHY DO ALL THE PRETTY BOYS BE GAY?!”

Will probable joke of your private life (especially the uncomfortable details)

He has at LEAST a few horses

In the modern world, he has a cool car

Flushy and sweet as fuck

Tol, but not as Ernest but still tol

Is gay, out of the closet, proud and obvious because he CAN, HE WANTS TO AND HE LIKES IT LIKE THAT

Is the cupid of the group alongside Briar

Will ship you and your LI

hi!! i didnt mention this earlier, but i just watched a few more animes and have decided to open requests for the ones i watched!!

i will now write for:

i’ll update my recently watched/watching/want to watch list with a reblog as frequently as i can!

#sorry sorry, #i put these new fandoms in the rules for requesting, #but nobody checks those, #and i really wanna write for kakegurui, #so i decided to just announce it, #sorry if this is annoying, #but it seems like a good way to organize my thoughts as of now
2 notes · See All
mantisslordPhoto 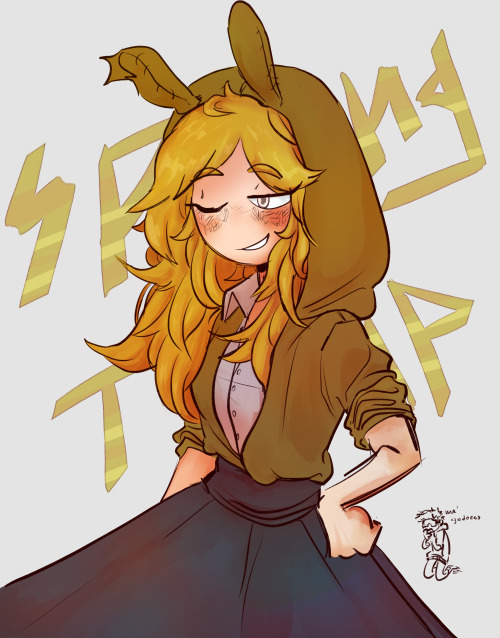 so I didn’t have any experience with time stamps until I got into kpop and started looking at stuff for it, but personally I do it for the time that what’s happening in the fic is meant to be happening, not the time I wrote. and I think that’s how most other people do it too.

as for the exclamation mark thing, that’s pretty much always been a thing in fanfiction since forever im pretty sure. I couldn’t tell you why or when that started but it’s just a way of showing that it’s an alternate take one the character/idol. I don’t think theres any special reason for it tho and it’s also not exclusive to tumblr either. I’d say there’s a good chance you’d find examples of it on websites like archive and fanfiction.net and watt pad and such

#fanfiction is old as fuck tho so who knows where any of the rules came from, #but it’s present in every fandom pretty much, #ask
3 notes · See All
arcadias-glorious-trashText
#fandom will rule the world, #the world quivers before us, #you cant stop us peasants, #meme, #tales of arcadia, #trollhunters, #trollhunters meme, #jim lake, #claire nunez, #just bc theire in the pic, #fandom, #fangirl, #fangirls
23 notes · See All
suspiciously-squishyText

It really is sad when someone thinks that a person helping them out once means that it’s okay to view them as a resource to further their own projects and nothing more.

#me rule, #what's mine is not fucking yours I barely know you, #Don't be presumptuous and also like, #maybe try viewing other people as PEOPLE, #potential friends even?, #not just business opportunities?, #wild concept in a fandom space I know, #(and I say this as a not very outgoing person already), #jfc, #Don't be presumptuous with OTHER PEOPLE'S projects, #their time, #their effort, #the things they've made on their own, #I heard some shit the other night that has steam coming out of my ears
5 notes · See All
twrflwrText

among the LONG LIST of useless muses i have, #1 among them is mother from ragtime

#ooc., #thats called ''i want to play her in a production of ragtime'' asdfghjk, #her and jerusha from daddy long legs, #nonexistent fandoms but they rule my heart
3 notes · See All
ryunosukescutiepieText

What I can’t write:

Characters I write for:

Characters I won’t write for:

Me, sipping from my hot chocolate mug: “Well well well, let’s see which Janus ship vibe is radiating from this…”

#Sanders sides, #it's callout time, #impatentpending, #meme, #this fandom is full of amazing people, #and Elena is one of them, #you go you funky snusband's wife, #go and predict the future of tss, #go and destroy our heart with angst, #you rule
57 notes · See All
lcsbianistText

#this is a kindaichi love club, #i dont make the rules i just enforce them, #sarahs fandom things, #haikyuu!!, #kindaichi
6 notes · See All
lilacsolanumLink
It's One Banana, Prompto, What Could It Cost? Ten Gil?https://archiveofourown.org/works/26831815

Ignis, Gladio, and Prompto exist in orbit around Noctis, and they like and respect each other. They all looked forward to a fun and frivolous road trip, excited to celebrate the end of Noctis’s life as a single man.

They never expected the journey to turn into weeks of unrelenting close quarters, desperate scrambling for gil, and endless fights with daemons. When Ignis gets taken out by poison, their rising tension comes to a head, and they must smooth out the changing nature of their relationships.

#final fantasy xv, #ignis scientia, #gladiolus amicitia, #prompto argentum, #noctis lucis caelum, #chocobros, #it's me writing about team dynamics, #new fandom old bullshit, #they only talk about class differences for like two sentences in later chapters, #but if y'all get to name your fics after three lines of hozier lyrics, #I can name my fics with Lucille Bluth quotes, #no rules just right
2 notes · See All
lexiewritesText

Pro-tip: If you read a fic you like, and want to use a similar idea, it’s always a good idea to credit the fic that inspired you.

#i already deal with the fact my own sister essentially rips off my writing style, #in another fandom, #by not dealing with it at all, #i have no energy left to deal with other people who riff on my ideas, #and the thing is i would be the fic's biggest goddamn cheerleader, #and super supportive, #aside from the scenes that are a little too similar, #it's been a long day and maybe i'm reading too much into it, #i've been in fandom long enough to know the Old Rules, #not everyone has, #i don't want to be THAT asshole, #but it's ruffled me
3 notes · See All
risingmccnsText

I added six new muses yesterday, and I’d love to get some things going for them! So if you’d like a short starter from Brittany, Eleanor, Jeanette, Audra, Callum, or Prudence please comment on this with a character! You can read about them in the source link (the latter three are on my seasonal muses page which you can access via my muses page).

As always, I’m open for any AU, not mentioned ships or your own requests what I should write. That includes ideas for characters as any part of LGBTQ+. I don’t write smut normally, but I can if it makes sense in the story, so just send me your idea and I will tell you whether or not I will write it. Just no PWP please. I also keep the right to decline when I’m not comfortable with something or I have no ideas for a story or characters. (Doesn’t really happen though.) So never be shy and feel free to prompt me!

Assassin’s Creed
A beloved fandom I haven’t been producing for for some time, but still love it.
Ships:
-Altmal (My first ever OTP)
-Desmond/Clay (Always wanted to write something)

Dishonored
Will gather for whiskey and cigars at any time.
Ships:
-Corvosider (I will go down with this ship)
-Corvo/daud (Like reading it, have never written something)
I don’t like Emsider that much, but won’t say no if something comes to my mind

Detroit become human
My “current” hyperfixation since the game came out. I definitely am stuck here.
Ships:
-All of them
-Reed900

Deus Ex
I definitely asked for this!
Ships:
-Jensard

The Magnus Archives
Statement of OP regarding the loving relationships imagined:
-John/Martin

Mass Effect
This is my favourite videogame on the citadel!
Ships:
-Shakarian (There is no word to describe my love for Garrus)
-Shepard/Legion
-Shepard/Tali
-Jaalryder
-Ryder/SAM
I’m mainly here for sexy androids and aliens, but I love everyone. I’ll write Shepard as male, female, nonbinary or any gender you want in the ships.

Prototype
The second game never happened.
Ships:
-Protocreed (Almond and Dana/Rebecca)
The popular crossovers aren’t available because I don’t own a playstation, sorry

Witcher
Goddamnit Roach!
Ships: (Don’t really have one)
-Geralt/Yen
-Geralt/Dandelion
-Geralt/Regis
-Regis/Detlaff
Or any combination of them (I don’t like Triss, sorry)

for your consideration : juno gently removing nureyev’s glasses before kissing him tenderly

#tpp, #the penumbra podcast, #junoverse, #juno steel, #peter nureyev, #jupeter, #i am SOFT okay ???, #i dont know if i should be proud or ashamed that this is my first contribution to this fandom, #also jupeter ????, #best ship name ever, #i dont make the rules
134 notes · See All
Next Page