That’s what she says before dunking her in the Grimm pool.

What do you love the most about Blake and Yang?
For me it’s their confidence on each other! Being able to count on  each other regardless of the situation. And  without having to be afraid <3
I like to think about them a lot when I think about relationships. They are the goal of my life \(^.^)/ 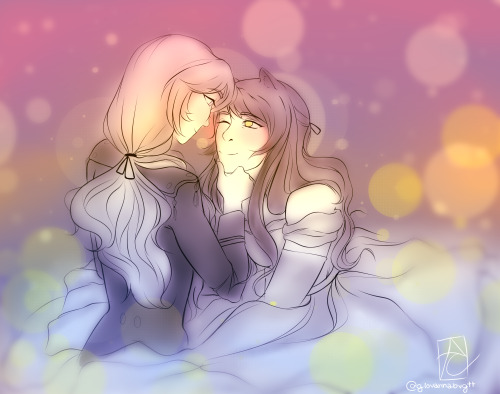 I’d love that! Would be a wonderful callback to the fireflies in rwby chibi lol. But it would also be a wonderful moment of respite for the team and a reminder that they’re fighting for a world where these peaceful Semblances can shine.

We still literally don’t know what Penny’s Semblance is. Not a smidgen of a hint of an ability that isn’t tied to her robot powers or her Maiden powers.

I am VERY excited to see what that Semblance could be 👀

Maybe a noncombat Semblance? Since so much of Penny’s life is combat-oriented, a soft Semblance would be very nice to see. Especially since we’ve seen her in life threatening fights now where she hasn’t pulled out some new ability. I have no idea though, and I’m excited to find out 👀

When (not if!) Emerald uses the Lamp, I really excited to get some new information. Even if it’s just a clarification of Salem’s plans, whether she does want the world to end, or has a plan to defeat the gods when they show up.

It would be a pretty big waste of the Lamp - and of crwby’s storytelling time in a jam-packed volume - for Emerald to just learn information that we, the audience, already know. It wouldn’t be as impactful as us learning new information alongside her. So I’m really excited for whatever new info Jinn has in store for us - and most importantly, what it means for Emerald.

“Wonder how long it’ll be before Hazel comes back,” Oscar muttered to nothing. The bruised, broken boy was outstretched and hanging about five feet up, facing the ground. One Grimm hook wrapped around each limb, with one more around his torso. Each time he breathed, it reminded him of his broken ribs and burned chest. Everything just hurt. Not to mention that Oscar couldn’t feel his hands or feet anymore.

The dim light from the fake skylight still showed over him, giving him no indication of how much time had passed. His shadow was like a stain on the unforgiving ground. There was no sound other than the creaking of the whale and Oscar’s personal comments–it was eery. Not to mention the inside of the whale smelled faintly of rotten guts and tar. Oscar already fought down nausea with each punch to the gut Hazel threw, and the stench certainly didn’t help.

Salem had already started her attack, so he doubted he’d be seeing much of her. Though he guessed that Hazel hadn’t told her the password for that very reason.

I trust you, Oscar, Ozpin said, I really do. But perhaps it was too premature–

“No,” Oscar coughed and shook his head. He felt blood trickle out his mouth and heard it faintly splatter on the ground. Fantastic. “He’ll do it. He has to.” The boy sighed and hung his head. “I need to have something to hope for.” The comment hardly came out as a whisper. With Atlas and Mantle in shambles, Oscar had long since stopped hoping for rescue. His friends had much bigger problems to worry about than him. He hoped they were smart enough to figure out that Salem wouldn’t kill him; killing him now would be a detriment to her plans.

Oscar would just suffer for an undisclosed amount of time.

Ruby gripped her scythe when she saw Cinder descend near the generator. “You need to leave.”

“Not without that puppet pretending to be the maiden. Those powers belong to me.”

“They belong to Penny-”

Cinder smirked and created a sword, eyes glowing with power. “A false promise to a puppet pretending to be a human. You’ve seen her die once, are you sure you’re ready to see her die again?”

Ruby rushed at Cinder, those words stinging her. “I will not let you harm her again!”

Cinder smiled and started blocking each hit that Ruby attempted, laughing with each strike. “You could barely fight me when I had half the maiden powers. What makes you think you can keep up with me now?” She grabbed the shaft of Ruby’s scythe and used her semblance to snap it in half.

Ruby dropped her damaged scythe and pushed herself away from Cinder, hesitating for a moment. “I’ll keep fighting for my friends, no matter what!” Her eyes started to glow, stopping once she felt Cinder’s grimm hand pressing against her chest.

Cinder smiled and started draining Ruby’s aura, her arm starting to glow red. “Then I’ll make sure your death is in vain.”

Ruby screamed in pain, not noticing the wind starting to pick up around her as ice started to form. “I… will… protect everyone!” Silver energy started bursting from her eyes as the ice and wind slammed into Cinder.

Cinder’s eyes widened as she saw the display, quickly changing to a frown once she realized what had happened. “No! That can’t be yours!”

Ruby hesitated for a moment as she felt a power building up inside of her. She caught her reflection in the ice, seeing her eyes glowing the same way Penny’s did when she used the maiden powers….  And then she felt it. A presence in her mind that felt… familiar. Her eyes widened as she started putting everything together. “P-Penny….”

Cinder rushed to Ruby, ready to try to drain her again.

Ruby immediately created a scythe from ice and slammed it into Cinder’s grimm hand, bracing herself.

Cinder growled in anger and started throwing fireballs at Ruby. “Those powers are mine! They cant be yours!”

Ruby spun her scythe around, getting pushed back by each hit. She glared at Cinder, feeling more of the power building up inside of her. “Leave. My. Friends. Alone!” A bright silver light emanated from her eyes.

Cinder screamed in pain and rushed away, the cold from Ruby’s eyes burning her flesh as well as burning away pieces of her grimm arm.

Once the light faded away, Ruby slumped back against the wall, shaking. Tears rolled down her cheeks as everything that happened finished processing through her mind. “P-Penny…”

Blake rushed over to Ruby, panting and trying to catch her breath. “R-Ruby! Is everything okay? I was coming to check on you and saw the flash from your eyes and I-” she stopped mid sentence once she saw faint silver light trailing from Ruby’s eyes. She sighed and pulled Ruby into a hug. “I’m sorry.”

Ruby pressed into it, sobbing into Blake’s shoulder. “I… I couldnt… I needed to be faster…”

“It’s not your fault. We saw her when she landed.”

Ruby just broke, all of her emotions finally getting let out.

also i was watching episode 7 for the 10th time and watching emerald’s body language when tyrian appears… she’s visibly terrified of him. he comes closer and she backs away, her hands are tense and they raise when he gets closer, like she’s getting ready to protect herself. she’s clearly just so afraid of him, and it’s no wonder considering how much he loves to emotionally torment her and mercury

something I think is really interesting to consider is why did emerald go to the room oscar was being kept in the first place? was her plan all along to eavestrop? or did it only change to that because hazel was already in the room with him? was she planning on talking to oscar (or ozpin) personally and finding out information from him? i genuinely don’t know the answer to this but it’s interesting to think about and if anyone has any thoughts/if I missed something that told us then please let me know

I both do and don’t won’t Ruby to be sad in the second half of volume 8. Because, on the hand, if she cries i more likely than not am also going to cry and be depressed. But on the OTHER hand: feeling sadness, depression, or other negative emotions would be a step in the right direction for her.

She has not addressed ANY of her traumas ONCE. Instead of grieving for Pennys death, she went and fought the Grimm invading beacon. Instead of grieving for Phyrra or addressing Blake leaving her and Yang, she went on a quest to get to mistral. Every time something bad has happened, she ran or tried to accomplish a heroic goal for the greater good. She hasn’t addressed her negative emotions or experiences ONCE.

But now? She doesn’t have a god damn choice. She can’t just LEAVE Penny, and there isn’t anything she can do to avoid her. So she now has to ecknowledge that she might never see Penny again. And that is probably gonna make the emotions she has been bottling for the entirety of the show erupt like fucking Yellowstone. 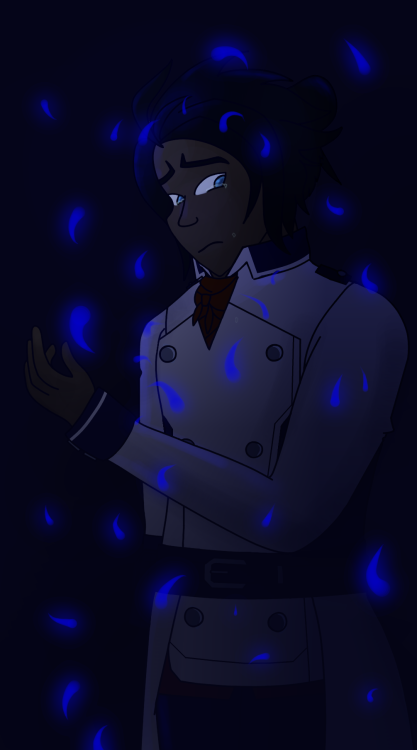 (Penny crashes in the courtyard and everyone runs to go see what happened, Whitley follows closely  behind. )

Whitley: HO MY GODS! It’s Penny Polendina … Angels are falling from the heavens.

Weiss: Whitley is apparently … a Penny fan boi … apparently … and apparently he was being on his best behavior before when he greeted us; and that’s why he was pestering me in front of the stairs because he wanted an autograph. But at this point I think all his restraints are gone … he’s going full fan boi.

Ruby: *looks to the giddy Whitley* … can you wait tell she’s like I don’t know NOT DYING! HELP!

I cannot get this HC out of my head about Raven returning this volume to save Yang from getting caught in Monstra’s explosion and having some line like, “There’s only going to be one person I’m thinking of,” before she dies, thus Yang becomes the new Spring Maiden.