Yang: “Do you think she thinks less of me? For not helping out with Amity?”

Jaune: “Ruby is you sister. She’s always going to love you, even if you disagree with each other.

IS THIS BUMBLEBY CONFIRMED?????? SOMEONE TELL ME PLEASE 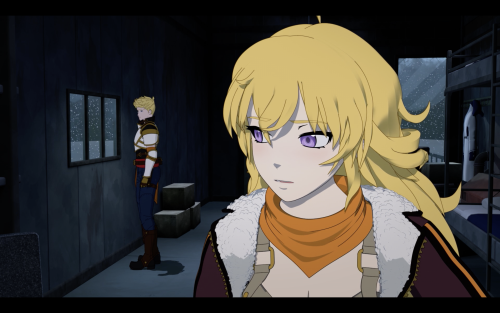 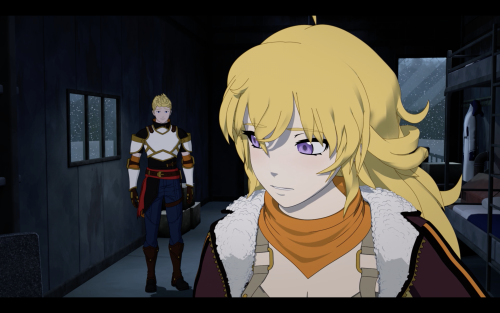 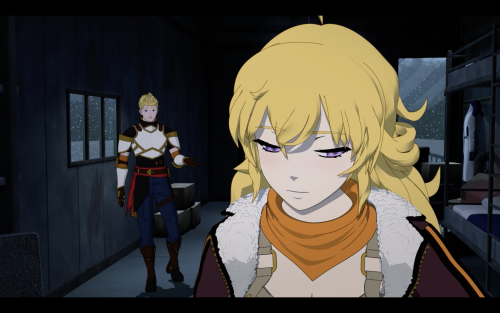 hI I kindda got bored so I made that-

I would of used the photo of Yang and Blake at the waterfall when they were hOLDIN HANDS but I couldn’t make it all transparent. 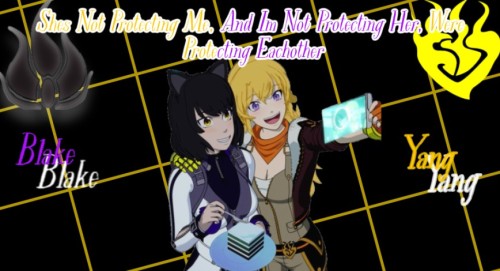 It seems that they’ll be apart for most of the volume, but looking at Yang’s and Blake’s reaction to the mention of their team and ReNora parallels, they’re thinking of each other. I’m hope that Blake or Yang will have conversation with Nora or Ren about their feelings 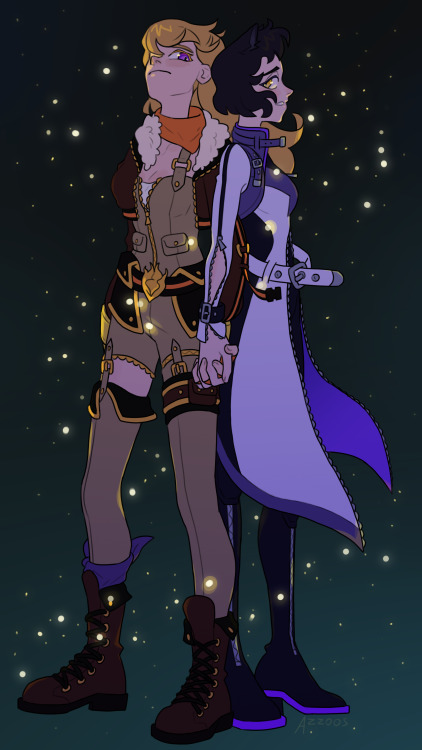 Here is my finished piece for the BBB this year! I worked with the super amazing author, @emocean-is-trash​, to bring her story to life in this illustration.

From the moment I read the synopsis, I knew I was going to adore this story. I’m so glad I was able to work on this project with Alex.

Please go give “All The Things You Are” some love, as well as check out the other big bang works the incredible writers and artists involved have created! I feel blessed to have a part of it <3 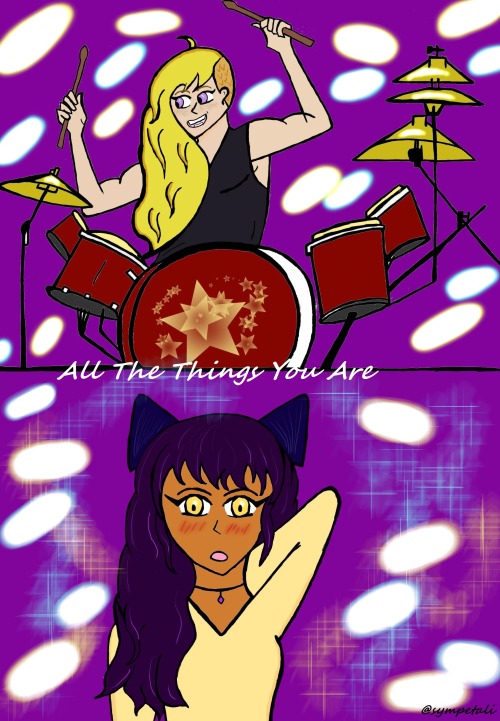 it’s impossible not to look at Yang’s abs…

btw it’s not homophobic to think that Blake Belladonna displays romantic interest in both women AND men. It’s actually biphobic to invalidate and deny her experiences with two male ex-love-interests now that she’s also showing interest in Yang.

Ship bmblb if you want. Ship it to high heaven. It’s valid to want a same-sex relationship between main characters in RWBY - something that Rooster Teeth still hasn’t committed to in-show for all their hints and promises. But please stop attacking people who looked at five seasons of natural, meaningful, chemistry-driven romance between Blake and Sun, and thought it was good. Blake showing a clear romantic interest in men does not mean she can’t like women, and Blake showing a clear romantic interest in women doesn’t mean she can’t like men. Maybe Blake likes both. Maybe Blake likes MORE.

To pretend she’s limited to one is more harmful than some people seem to realize.

#rwby, #rwby bmblb, #rwby blacksun, #rwby blake, #rwby sun, #rwby yang, #why am i doing this to myself, #bring on the hate
34 notes · See All
sthefboohPhoto

After a long time I came back with RWBY Art, and I am subtly opening commissions, if anyone is interested, please contact me ^^ 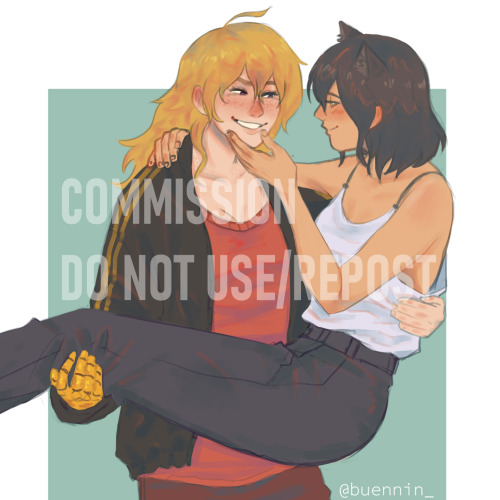 Just want to celebrate new volume with my lovely bees 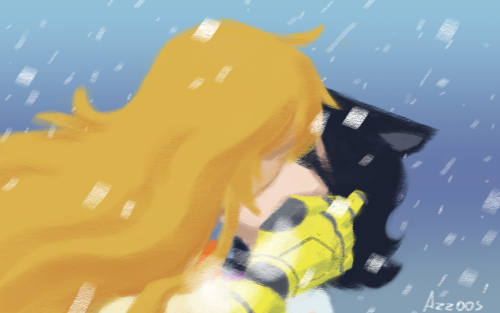 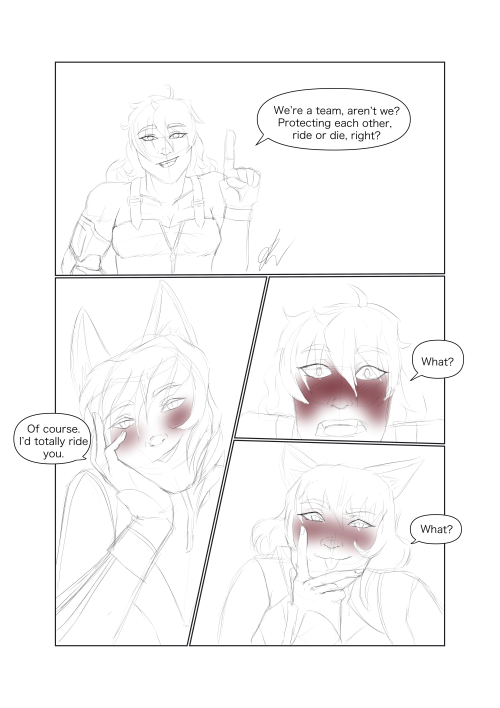 bees in Halloween costumes that Yang picked out

After Yang and Blake have been together long enough, Yang a singular thought would begin to circulate in her mind, consuming much of her time and thought’s.

When Blake asked her for her hand, Yang instantly said yes, for many different reasons, the main one being that she truly loved Blake and second slightly lesser reason being that she finally gets to say it, her greatest pun.

With everything said and done Yang and Blake were ready to set out on their fist trip as a couple.

Yang turned to her friends and family: Later guys, these bumblebee’s are ready for their “Honey"moon.

Various groans of disappointment resound around them the perfect chorus for their departure.

Cute silly comic I did of the bees.

Smol Blake was a blast to draw

Bonus panel was supposed to say

bumbleby zoom call fanart based on Barbara dunkelman and Arryn zech at galaxycon 2020 (if I remember correctly lmao) ! :)

Yeah, no, it’s like. 100% about Blake and I’m so sure of that I will make definitive statements about it.

The song’s about Yang’s recovery after her defeat by Adam, something Ruby has nothing to do with that. The first two verses are about a constant nightmare she has, nightmares we know are about Adam, and it makes no sense for the lyrics to go “I have nightmares about Adam, I love my little sister who’s not connected to these nightmares at all, anyways back to those nightmares.”

“My minds repeats the scene, I can’t forget it and it’s torture” <- Makes no sense if we assume the “her” is Ruby because Yang never witnessed anything happening to Ruby in the first three volumes that would be so horrifying that it would be considered torture

And this is just something I remember so I could be wrong, but I’m pretty sure after 6x10 someone tweeted a screenshot of Yang on Bumblebee going to to find Blake with the lyrics “I’m racing towards her side, there’s nothing that I won’t do for her” and Casey liked it. Obviously that’s not the scene the lyrics were referencing, but it was still pretty 👀

The long and short of it is that reading the “her” is Ruby requires you to take the lines out of the context of the rest of the song because of how disconnected Ruby is from the trauma Yang suffered during the fall of Beacon, but reading it as Blake fits perfectly into that context because she was the third person present for what happened. It ~just happens~ to feed into the shipping because “There’s nothing that I won’t do for her” is such an intense statement that it feels romantic, but reading it as Blake isn’t about shipping, it’s just objectively what makes the most sense in the context of the song, of the verse those lines are part of.

#Anonymous, #Annie babbles about RWBY, #I'm once again crying over the gayest thing we got out of volume 4, #Until BMBLB anyways lmao
62 notes · See All
Next Page