Aka I’m posting one-year-old art I did for the @shipwreckedfanzine last year because I totally never posted this!!! Ahahaa (go check out the zine! Its free download and multi-ship Qrow zine, but you can download individual ships too)

This art is also available as a print in my shop! (Chiherah.com)

Don’t think I’ve ever actually shared this but

Here is My Happy Huntresses OC, Raina Lavender!! If anyone is curious about her pls just ask no worries and you’ll definitely be seeing more of her later on! ;)

Be may do crimes

i’m tired, please take this little doodle of may and cinder ‘fighting’ over the winter maiden

[ May: Stand down, Cinder. And hand over the winter maiden]

RWBY, the volume 8 * instense exhale * its kIlling me ITs gREat don’t get me wrong bUt DANGGGG I- i even saw the fricking sneak peak * couGh * RubY was frickiNg teariNg uP i NDNDJSJSJSJSJ

WAR BABES, nevermore is a close second but that intro riff makes me want to whoop someones ass too

THE TWISTED TEA IS SO CRISPY

I’m proud of this

Someone had to take the fall.

rwby vol. 7 + history of the entire world, i guess

Qrow watched as James gave the kids their licences. He remembered how it felt, the excitement, the freedom of knowing he and Raven would be staying. They thought they could do anything, that nothing could defeat them. They were proven wrong.
Somehow, though, he didn’t think these kids would be.

I wrote this drabble awhile ago and figured i’d share

If Blake had a tail and fangs + disaster lesbian Yang:

Amanda Waller is aboard a mobile command center, hovering just above Metropolis. With a look of fierce determination, she stares at a wall of monitors displaying the threat that lay before them. Darkseid and an army of Parademons are gathering just outside the city, preparing to attack. Waller’s forces are down below, leading the evacuation of Metropolis. She sighs, opening a comm link to all of her subordinates.

“This is Waller. Halt the evacuation. We’re pulling out of Metropolis. I want everyone to rendezvous Beta camp immediately. That'san order.” Her eyes narrow slightly. “I know you’re there.”

Batman steps out of the shadows, glaring at Waller.

“What are you doing?” he asks gruffly, stepping up to her

“What I have to.” she says with a wave of her hand. “Darkseid is closing in, and we need to get this piece of the Anti-Life Equation as far away from him as possible. I’m taking my forces and we’re leaving.” She turns back to her monitors.

Batman growls in anger. “Absolutely not. Metropolis is still being evacuated. The Justice League is doing what it can but if you leave with your men, millions will die. You’re abandoning the people you swore to protect.”

She wheels around, her frustrations rising.

“That may be but I have a job to do and I’m sure as hell not letting Darkseid get my piece of the Equation. This is bigger than one city, Batman. I’m abandoning a city to save the world.”

“There is always another way!” Batman says. “I will find another way. I will not sacrifice these people for the small chance your plan will work. No one dies if I can help it. No exceptions.”

Waller turns to look at her security team. “Take him into custody while we-” she stops, realizing Batman is already gone, as he heads back down to do what he can for Metropolis.

When Batman does this, he’s a badass, and a hero for sticking to his morals. He won’t let innocents die, no matter what. Hell ya Batman. Waller is just cold and insensitive and just cause problems.

But when this whole situation actually happens in RWBY instead, we demonize Ruby for the exact actions that Batman would have taken in that situation. Hmm…interesting

Thank you all for following our project this year, it means the world to us and we hope we can continue creating this rewrite for years to come!!
-Love, the RWBY Rewrite team! 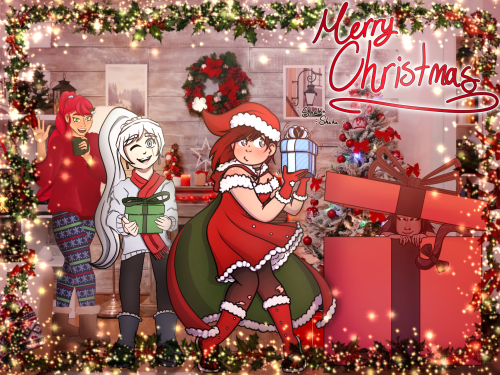 OK. we had weiss and winter hug.

we just got a weiss and WHITLEY hug

now ALL the schnee siblings please

(maybe even mama schnee as well?)

I’m still mad at CRWBY for how poorly they handled the whole Lucky Charms thing (especially that apology), but if volume 7 ends with Tyrian being brutally murdered, all is forgiven

Well look who it is