“You’ve got a team now, Jaune. We both do. And if we fail, then, we’ll just be bringing them down with us. We have to put our teammates first, and ourselves second. Your team deserves a great leader, Jaune. And I think that can be you.”

“I don’t care what you say! We WILL stop them, and I WILL stop you! BET ON THAT!”

“No! But I won’t stand by and watch someone get hurt!”

“You told me once that bad things just happen. You were angry when you said it, and I didn’t want to listen. But you were right. Bad things do happen, all the time, every day. Which is why I’m out here, to do whatever I can, wherever I can, and hopefully do some good. We’ve all lost something, and I’ve seen what loss can do to people. But if we gave up every time we lost, then we’d never be able to move forward.”

“Whatever it takes to shut you up.”

“Just because you don’t have an idea, doesn’t mean we’re out of options! Oz hasn’t been here to tell us what to do, but we still managed to get this far anyway. We’ve been in bad situations before, and we don’t need an adult to come save us or tell us what to do. We just did it our way! And I say we do it our way. And if you think you can keep up with us “kids”… we’d be happy to have you.”

“We’re all in this together, and we’re all going to do the best we can. That’s all anyone can do. And I know it’s what you’ve always aimed for. We would’ve come whether or not you’d let us, so stop talking like we’re your responsibility! We’re not! But we could still use Qrow Branwen on our side.”

“We’re going to Atlas. Bigger people than you have tried to stop us and failed, but we’re supposed to be on the same side! We’re supposed to use our power to protect people, but you just use yours to look down on everyone! We didn’t want to steal from you. We did it because you gave us no other choice! Now I’m giving you one last chance to stand down and hear us out.”

“You were. Then you trained us.” 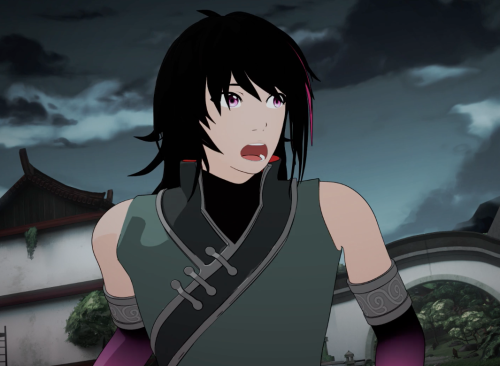 Don’t worry weiss, you have a new better family

The Scorpion boi has arrived :D

Does anyone wanna send me some asks just talking about RWBY?? Please????

It could be about literally anything: theories, predictions for future volumes or talks about past ones, individual characters, ships ANYTHING

This hiatus is killing me

Don’t mind me. Just reveling in my Yang angst.

I like the idealised version of her younger self from her beacon days I have created after seeing cool fanart and reading way too much fanfiction instead of being productive :)))

Something I noticed while re-watching RWBY. Not sure if it’s actually an indication of anything, but I thought it was pretty nifty.

(This was Volume 4 Chapter 5, by the way… in case you’re wondering)

#thanks i hate it, #rwby volume 4
11 notes · See All
acollectionofhalftruthsText

I drew my girl Ilia (from RWBY) in a cute cottagecore aesthetic because it’s what she deserves!! 💜💖💛

My Ranking of the best characters every volume of RWBY. This is 100% opinion based

4. Yang (The most likable character this volume)

3. Weiss (Her arc was starting this volume)

4. Roman (A lot better this Volume)

4. Jaune (his best since the new saga)

1. Yang (Everything was fine until Blake came back)

2. Blake (everything was fine before she returned to Yang)

Volume 7 (great characters. If only the actual MCs felt important)

1. Ironwood (best character in the show)

1. Oscar (if they work with the material he was built up with in V6 and V7 and expand on it, he can easily be the best character in the show)

2. Ozpin (if Oscars gonna be great, he’ll be great)

3. Salem (she may finally do something)

4. Neo (shes actually doing something in the show)