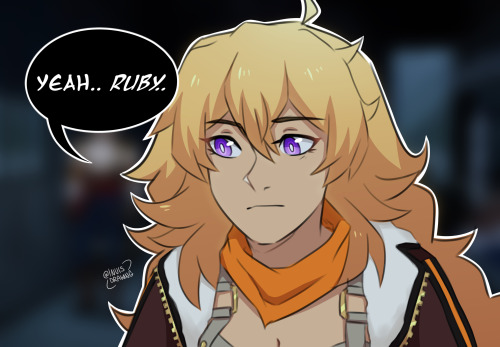 High-key living for this rescue.

I know Ren was angry and I totally get why but he couldn’t have possibly wrestled Oscar off of the Hound. So even though he did have to actively make the choice to let Oscar go (and watched helplessly as it carried him to a flying Grimm fortress) it was the right thing to do, because if he hadn’t, Yang and Jaune would be dead now. He’s stuck in the mindset of ‘what if’. What if Yang and Jaune didn’t fall, would have have saved Oscar? What if he didn’t have to let go of the Grimm to save them instead? The answer to all of this is obviously no, he couldn’t have rescued Oscar alone, dangling a hundred feet in the air from the claws of a giant, intelligent, talking Grimm.

He just can’t see that now because of irrational thinking. Irrationally blaming himself and everyone else for failing.

Me when people say Yang only cares about Blake and doesn’t give a shit about Ruby:

#this is the only fandom I'm in, #why are yall like this, #yang thinks her relationship with blake has the most chance of going wrong, #she's just really confident with ruby, #it really isn't all that hard to figure out, #you guys just want a reason to hate on yang and bumbleby, #rwby, #yang xiao long, #ruby rose, #blake belladonna, #bumbleby, #rwby spoilers, #rwby volume 8, #rwby8 spoilers
24 notes · See All
anesidoraaText
#rwby, #rwby v8 spoilers, #rwby v8, #rwby volume 8, #photo edits, #rwby v8e3, #penny polendina, #winter maiden
2 notes · See All
imdcathsmeowText

Any show you watch will always have a character that goes through a “Jerk Season” either because it’s a part of their character arc or the writer is biased towards or against the character.

RWBY Volume 8 just happens to be Ren’s turn to go through it. It happens and it’s normal.

saw this post and i lost my mind thinking about it, so i had to draw it. 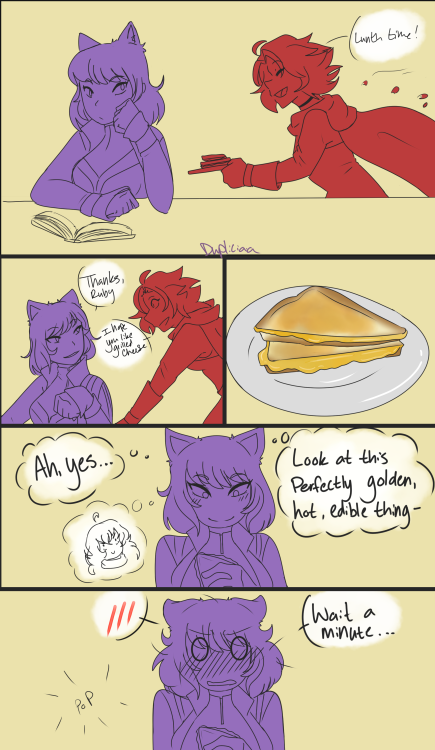 My new header image just about sums up how well the situation is going for Remnant right about now.

#rwby, #rwby volume 8, #halo reach, #the enemy is ruthless efficient but they're not nearly fast enough
1 notes · See All
gladsomevarangianText

Just saw a post that went along of the lines of saying about how Yang’s worries might be because Blake hasn’t trusted her in the past, pointing to Blake having Yang promise her after the incident with Mercury and no, that’s not it.

The bees are a little worried about where they stand with each other after splitting up into separate teams, but that doesn’t mean they don’t trust each other.

Blake asking Yang to look her in the eye and tell her that Mercury attacked first back then was a result of Blake’s own issues, not a lack of trust in Yang. She wanted to believe her from the start.

“You cheated your way into Beacon”? Really, lotus boy? REALLY?

Feel free to use, just please credit me!

#rwby, #rwby spoilers, #rwby volume 8, #yes i made her eyes sparkly in every one she deserves it, #yang xiao long, #also yes i hc her as an enby lesbian, #self projecting? maybe
13 notes · See All
onionymousText

Also, thoughts on Ren and Yang… I’m sad; 2 volumes ago and they hugged after they reunited in Argus. Anyway, I’m on Team Ren in this one. They’re barely adults and they feel like they have the responsibility to save the world. Like, how about those older huntsmen and huntresses who have way more experience than them and actually graduated from hunstmen academies?

Also, Oscar my poor baby 😭😭😭 kudos to the VA cuz the groans and cries were really good. At this point, I just want to end his suffering. (I mean, we do know that Jinn can only answer one more question so that’s okay, right? Ruby really should have used her final question so it would take 100 more years for Salem to use Jinn again.)

Also, did anybody else see Neo do the ballet thing on the ship? I love her! Have I mentioned I love her? Cause I do. 💕

Again, back on Whitley. Continue being your sassy self. You’re doing great, sweetie!

Willful ignorance aside, you can tell that the people complaining about Yang not showing concern over Ruby’s opinion of her have never had an SO. Yang is showing classic “first argument panic” here. Anyone who has ever had a new relationship knows that feeling of panic and “did I just F this up” after the first real argument or disagreement. You don’t get that same concern when you have an argument with a sibling, who you have a strong lifetime bond with.

Will be interesting to see how this resolves, especially since Blake was trying to use Ruby as an excuse to call and check on Yang.

#kinda surprised no one has posted this, #do you ever just point your sword at your brother, #rwby, #whitley schnee, #jacques schnee, #weiss schnee, #schnee family, #rwby volume 8, #rwby spoilers
16 notes · See All
eshdenText

I have been rewatching last episode and damn, big shout-out to Neath, I can’t stop wachting the ‘you cheated your way into Beacon!’ scene

This would be great. Get the poor farm boi out, get Neo the fuck out of dodge, sounds wonderful to me.

People seem to be having a hard time grasping the difference between audience and character POV, as well as scene context. Let’s use Weiss and Hazel as examples.

Y'all, Weiss does not view her family the same way the audience does. She knows they’re broken, but her mind likely doesn’t even touch on the word abuse yet. It’s only been about 24 hours since her conversation with her mother where she got new info she hasn’t had a chance to process. In Weiss’ mind, Whitley is a little gremlin who treats her badly and acts like a little shit. She doesn’t understand him or see him the way the audience does. Not yet. So when he opens the door and starts on his usual snarkiness, she basically says, “I don’t have time for this right now, get out of my way,” in the most effective way possible. Their entire interaction makes sense for them and who they currently are.

Hazel isn’t a man of logic. Wounded in a way that can’t be healed = blind rage born from unbearable grief. It is not a thought out response. He blames Oz for everything, including the pain he himself is inflicting on Oscar. This is exactly what you would expect from a character who has gone down this road. If he stopped to think things through, accept his sister made her own choices, and grieve in a healthy manner, he wouldn’t be this character or one of Salem’s henchmen. Everything he does makes sense for him.

Too many people are trying to apply audience omniscience or cold logic to what the characters are doing, then complaining it doesn’t make any sense or that it’s bad writing because A is totally ignoring factors XYZ even though XY and Z haven’t even come into play for the characters yet.