(no discourse in the notes, please. i literally don’t care and i’m not willing to debate. thanks!)

Happy birthday to four of my favorite fictional characters:

Wanted to test the Paul Ruben Shimmer watercolor set on Weiss’s earrings and good lord, they are saturated. X.X 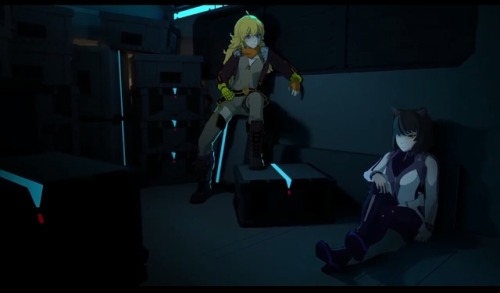 Ok I need opinions from fellow artists (don’t think I can qualify as one yet though but anyway) is tracing a good way to practice? Like I traced a picture of flowey from undertale today because I wanted to try the shading they did cause it seemed pretty simple and I struggle with shading. And obviously I will never upload it cause that’s a crappy thing to do but will it actually help me get better or did I waste about an hour or two of my time??

Ooh I like that! Yeah, I’ll accept any headcanon that retcons things I disagree with lol

The thing is, that doesn’t quite match up with the confidence she displayed in Volume 7 and has continued to tout in Volume 8. She’s the character that contrasts with Nora’s “I don’t really know who I am” statement. But whatever – she knows who she is and that someone has a terrible fashion sense, apparently. Go girl, give us nothing!

Sure thing! Weiss’s 7-8 design is my least favorite of all of them, for all these reasons (warning, I do go for the throat):

I want to take a moment to tip my hat to whatever storyboarder/animator looked at the V7 intro’s lyrics and went “Lol hey dude, what if we cut to the character voiced by Dawn Bennett right at the line ‘when dark won’t yield to dawn’? Like 'yield to Dawn’ Wouldn’t that be funny?” and just did it.

That shot of Elm is epic, but it’s just so corny that I can’t help but laugh. And it’s so well synched up that I have a hard time believing it was just coincidence.

Well, first, let me state that I like her haircut (though I feel its model could be a bit more voluminous); it’s mostly the physical clothes themselves I dislike.

Discussion of zippers and breasts under the cut.

First artwork with my new Apple Pencil! Decided to keep it simple but I definitely want to try more stuff in the future! ( maybe do whiterose?) I’m having fun learning with the Apple Pencil and ProCreate 😁

The great king of vale

As the the 3 bowed to him

Today I give you our favourite summoning queens

(Also, I’m going back to easier drawings cause I need to ✨study✨ for my ✨exams✨)

When Ironwoods saw the gold glint in Oscar’s eyes he paused. It was only for a second, it’d be unnoticed by most but Ozpin was something else. “Don’t…” He paused, turning away. He didn’t have time for this, he had a Kingdom to save.

Ozpin frowned, it looked out of place on Oscar’s innocent face and highlighted just how in pain he was. “Please… James… Listen to me what your proposing…” Ozpin couldn’t even finish, he’d lived this moment a thousand times and it never got easy. Every time it would pierce his heart and he was forced to remember, that even with all his lives he was but a man.

“It’s all we have, we tried it your way oz but that’s gotten us no where…but this way we can save Atlas.” Said Ironwood, their was some softness to his tone as if he understand where Ozpin was coming from. It was nostalgic of the many times they’d laugh and talk plans in his office, it should’ve made Oz feel warm…but a chill shot through him.

Ironwood smiled, it was neither gentle nor kind. He wondered why he did it all he got was that the motion felt appropriate. Smiling… At Ozpin… His friend. It took effort, and dropped as quickly as a house of cards. “Right, well I’ll send Winter and Oscar up to ami-” He scowled, hating that he was been interrupted and turned around. Oz was looking at him, gobsmacked and appalled.

“You can’t be serious… They’ll die!” Ozpin was screaming, no… He couldn’t… No… His old friend seemed so unbothered that Ozpin thought maybe they’d completely remade him in wires. “Ozpin… Now isn’t the time. The situation is growing dire as we wait, Salem is at our doorstep” He sighed, running a hand through his hair as if he was scding a child. “Winter knew what she was signing up for… And well he’s just another life, you’ll find a more suitable one soon more equipped for battle.”

Ozpin felt cold, as if he’d been throw headfirst with no aura into the heart of Solitos. “Excuse me…” Said Ozpin, his voice low and quiet and yet it got Ironwoods attention for the first time since they came to the vault. Ironwood for his part paused, “Oz? I meant nothing by it but you know its true.” His false apology only grew Ozpin’s ire.

The man was no stranger to insults, to pain, to suffering… He was an awful man who’d caused his fair share of it. Made more mistakes than every man, woman and child on this planet… But Oscar? He did not bare his sins… He was innocent, as every child should be allowed yl be… And here was his old friend, saying the opposite. That Oscar was merely armour Oz had dawned himself in so he could live and would discard just as easily.

It made him feel sick, his entire being was repulsed. He was trembling, anger rolling off him in waves. “You… Dare… You dare to reduce everything Oscar is… To a corpse on a ladder to send you forward?!” He spat, Ironwood glared. He supposed he understood where Oz was coming from, he had grown fond of Oscar during their training sessions. He was fond of Winter, her death would weigh heavily on him… But it was the price that needed to be paid.

“Sacrifices must be made.” Was all Ironwood said, Ozpin glared. But through his angered eyes were unshed tears. “You think I don’t know that!…” He yelled, edging towards Ironwood who stepped back. “You think I haven’t sacrificed everything for the world… Your plan is despicable, what happened to creating robotic huntsman to reduce the loss of life.” Ironwood bristled but Ozpin wasn’t done.

“You’ve sacrificed nothing… You led through peace and all you’ve known is peace… I’ve never known peace!” He cried, all his lifes were spent fighting this war, he’d lost everything… Countless times and Ironwood having the fall to say he had no idea about sacrifices. “I couldn’t… I wouldn’t want anyone to fight if I didn’t have too…and you want to so callously commit genocide. Losing your honour, your values, your morality… All because you’re afraid” .“ Ironwood glared "I am not afraid! You are!” He spat.

Oz smiled. He recalled Oscar saying something similar, and placed a hand over his…no their heart. “I am afraid” said Ozpin, the words carrying more than its fair share of weight. “And that’s okay, for it is what we do when we’re most afraid that reveals who we are.” He felt Oscar’s mind gently tapping his, his way if saying that he was with him.

The only one who had yet to abandon him.

Oz looked down, a tear rolling down his cheek. Mourning the memory of his friend, his college… His brother in arms. For she had won yet again, fear clouded Ironwood… The James he’d known and that man would be gone forever. “And I don’t see you anymore James…” He said, the words cracking and more tears falling as Long Memory clicked open.

“Do you intend to fight me?” Whispered Ironwood, dangerously. It was a warning. “I won’t allow you to do this. I won’t watch you fall further than she ever had… General.” Said Oz, as the words left his mouth the two were flung into a fight. It was vicious as the two clashed, they fell into a rhythm born from countless sparrs and friendly fights.

This wasn’t one of them.

And yet Oz was hesitant.

All to quickly he was thrown on defence, for all his talk he hesitated. His mind reeling, even when he was fighting the man he didn’t want to believe that he had fallen so hard….that was until a sharp gasp was heard, his mind was thrown back and their was a gun shot.

Oz took over instantly, a horrified scream on his lips. Already activating Oscar’s aura, terror on his face. From the fact Oscar had been shot, and Ironwood had known it was him…or that he knew and he still did it… Oz wasn’t sure which was worse. He felt sick as the familiar smell of blood filled the air, Oscar’s blood.

He wanted to vomit.

Instead he screamed, green energy crackled through the air. “You’re a traitor… I won’t allow you to stop me… No matter what it takes.” Said Ironwood steely and unfazed. “You… Became the traitor when you stopped wanting to protect the very people you swore to serve.. When you lost all moral integrity and rights when you shot a defenceless child….” Glared Oz, the energy grew and grew as did his strikes.

Just because he deserved suffering didn’t mean Oscar did. “And for hurting him…you’ll pay.” He roared, sounding inhuman as he charged towards Ironwood in a burst of green light.

My concerns of the rwby fandom became oscar pine fandom instead