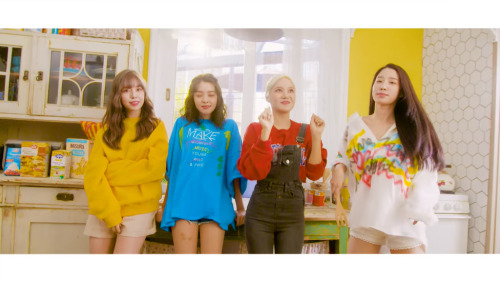 Does anyone know if Harry could have taken the golden egg in the Tournament with a simple Accio? If he could I want to punch pillows

“Merlin’s beard,” Newt mutters, staring at a side column in one of the wizarding papers she tracks for work.

Newt gestures frustratedly to the paper he’s dropped to his lap. “This!”

“Accio,” Tina says gently, unfurling the page when it reaches her. She easily finds the article in question. “You’re leaving me ‘tearful and broken-hearted after only a year of marriage’ for a witch you met in—“ she skims the article—“Australia.” Tina rolls her eyes. “Mercy Lewis, you’d think they would make some sort of effort. You haven’t even been there recently.”

She looks up, surprised to see frustration and even hurt glittering in his eyes. His hands are curled at his sides, somehow both limp and tense. She stands and joins him by his desk, looping an arm around his shoulders and kissing the top of his head. “What is it? These articles don’t usually bother you.” She’s been around to see many of them in various news sources, all full of rampant speculation about his time at school, or his deal with his publisher, or arguments he’s had with his brother. (That one, she reflects, had contained at least one or two sentences that were not rampant falsehoods.)

Newt covers her hand on his shoulder, tugging until she slides willingly into his lap. He buries his face in her neck, wrapping his arms around her waist. Tina threads her fingers into his hair. “How is it that people can’t tell how I feel about you?” he asks.

Newt huffs, shaking his head against her skin, and she shivers.

“I can always tell. You know that right?”

He hums and nods. “I just…I hate that they talk about you like…like a case I fancied carrying around for a week or two before I found a different one I liked better.”

“I guess they haven’t noticed how long you’ve had that same case.”

Newt laughs tiredly into her shoulder.

“I get it.” She begins to stroke her fingers through his hair. “I wouldn’t like people thinkin’ that I could just…throw you away.”

He tightens his arms around her. “Keeping you forever,” he announces into her hair. She pulls back just enough to cover his mouth with hers, plying him with a kiss until his posture softens. “And you’re keeping me,” he says roughly after a few moments, nosing along her cheek to kiss the spot beside her ear.

“That’s settled then.” Tina grins, but Newt swallows and adds, more earnestly. “I love you.”

Tina shifts until they can more easily see each other, resting against his chest, and drops a kiss to his nose. “Love you too.”

#bananachef, #my writing, #newtina, #newtina fanfiction, #accio, #wow it took a long time to come up with something for this
92 notes · See All
drarryruinedme7Text

So Harry spent all that time learning Accio so he could summon his broom but he didn’t think to just try summoning the egg?? I mean, maybe there was a spell on it that would keep it from working, but he could have at least tried. I mean, seriously????

I’ve always wondered the limits of the summoning charm (Accio). How specific do you have to be in what you’re calling? Like let’s say you say “Accio book.” Would you end up with the book nearest to you, or every book in the world flying toward you? And can you use it on a person? Or a creature? And what if the object is halfway across the world? Could it still work? Because depending on its limits, this one spell could possibly be the most useful in the entire series. 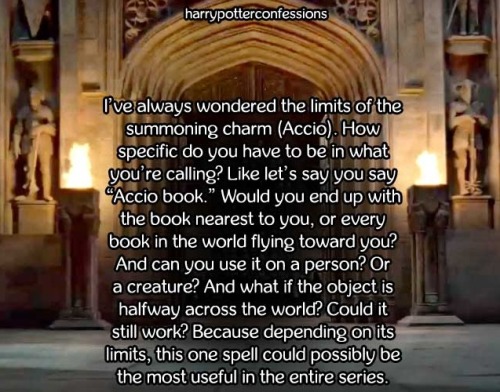 gonna put on my slytherins robes and try a spell again.

i have now acquired soup. have a good day.

In the wizarding world, shopkeepers had MAGIC. So why were their stores dusty, disorganized piles of nonsense? At my job we have to scan every item in the store twice a year just to know where the fuck it’s kept.

Were there no inventory spells? Clearly, spells could be crafted - look at Snape - so did no one create an inventerio or catalogia spell to help find things? The Weasley twins kept an orderly shop so there had to have been SOMETHING.

I discussed this with my 65-year-old dad - as you do - and he pointed out that you could accio almost anything. Okay, but:

After a lot of back and forth, which included the firm agreement that JK Rowling cannot be allowed to meddle in this discussion, we finally agreed that someone should write a fanfic.

Harry Potter and The Ingredient That I Swear We Have, Just Let Me Look a Little Longer, Ha Ha, Ain’t Magic Grand?“ 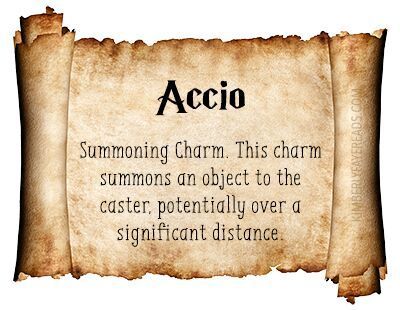 I’m mad today because when I read the books for the first time I pronounced “Accio” as “Asseeoh” which was fine, until I realized that it is pronounced “Ackeeo”. But, Jim Dale who voices it for the audiobooks says “Asseeoh” and now I’m just confused and angry.