Around the time they were filming 3x03/04, Jeanine said:

“So, there’s still some ways to go, but… So yeah, Forrest’s been around, but I think everyone’s gonna be happy. You’ll be good.”

As for “Forrest being around”:

I rather doubt that the M/M breakup will cause misunderstandings (and thus tension). It’s quite likely that there’s going to be a time jump fairly early in the season, it would be kinda weird for Alex being unaware for months that M/M broke up. Also don’t think it will be relevant who ended it.

If anything, F*rlex has the potential to be a reason for tension, but so far it seems, like Christian hasn’t filmed more than one, maybe two episodes. That doesn’t exactly scream “extended F*rlex season arc” imo.

Whatever it is that will cause tension (and there’s certainly more than just one reason), I 100% agree with you on the “I just don’t wan’t them to be mean to each other”

I’m so sick of it. The way the writers (lbr, one (re)-writer) made Michael treat Alex in S2 still makes me angry. I’m over it and don’t want to see any of that in S3. Tension borne of insecurity, uncertainty, and lack of communication however, I’d be good with that, as long as there’s visible progress, hopeful moments, and some of the tension being resolved along the way.

I also demand that at least 50% of tension between them, is UST and LONGING.

Nope, nothing, Forrest or F*rlex weren’t even mentioned (if there’d been any of that in the video, I would’ve mentioned it in the caption and tagged it).

Don’t know about any discourse, I have everything regarding the pairing blacklisted. xD

Vlamburn were asked how they’d describe S3 for Malex in one word, and Tyler said “tension”, while Vlamis said “hopeful”. Maybe people think Tyler’s mention of “tension” has something to do with F*rlex? Christian’s currently in Miami tho (i.e. not filming), not sure where the idea stems from that there’s a whole F*rlex arc with Forrest not there?

Either way, I think what you’ve seen is speculation, not any confirmed details of a storyline in the IG live.

I’m not sure what kind of meet & greet you can win (and how?), but I guess they’ll tell us?

Man, I’m dying for some spoilers. I doubt they’ll answer any too direct questions, and Forlex fans should probably be prepared to not get any answers about their ship (Vlamis is gonna get all possessive “Forlex? We don’t know her. This is MY boyfriend btw” - not sure if Tyler’s gonna answer Forlex questions either).

In lieu of real spoilers, I hope we’ll at least be able to tell whether good things are in the books for Alex and Michael. And by “good” I mainly mean, that they share scenes, and that they are headed in the direction of “getting together”.

Thank you, nonnie, I rather enjoy the holidays. I’m currently in a bit of a Bridgerton frenzie. The show butchered quite a few things, but at least they got most of the bits about Simon and Daphne right, and gdi, SIMON. Hooooooly smokes, what a Duke! RAWRRRR

Uhm, sorry, that wasn’t your question, had to share tho. xD

Mhmmmm, predictions are almost impossible to make tbh, with all the wild guessing we’re forced to do due to the lack of substantial spoilers, I don’t dare make any predictions beyond “Liz will return to Roswell in the first half of the season”. :P

As for my wishes, I’ve said this a couple of times before: I want Malex, and I want them to get together (and then be/stay together for the rest of the show and beyond) in S3. I don’t care about any romantic F*rlex stuff they’ll undoubtedly force on us to some degree, all I can hope is that it’ll be over fast. I just don’t have the patience to sit through yet another lenghty relationship that’s not Malex.

Other than that I just want a lot more friendship moments in S3, for people to have actual conversations, and for Liz to be at the heart of the show again.

I still think he’s on some kind of “social media break” (for lack of a better word,  just going by his general “IG inactivity” - compared to before filming started) and his “silence” has nothing to do with the show, or being (un)enthusiastic about ships etc.

To my knowledge, he’s never talked about F*rlex in interviews or while answering fan questions, insofar it’s impossible to say what he thinks about it (and whether he’s as unenthusiastic about it as he was about the PLL triangle xD), but I imagine he probably would’ve preferred if F*rlex had happened in S2.

Tyler suddenly doing a 180 and saying things like, “Well, Michael dated Alex’s best friend. Maybe Forrest is a better option,” but he obviously won’t do that.

Yeah, he definitely learned a lesson or two since all that went down last year.

Lbr, he’s a stage hog (and I don’t mean that as an insult). He thrives on all the  energy (good and “bad”), he’s like a kid on a sugar high entering a candy store. YAY, MORE SUGAR!

He loves to be at the center of attention, but he’s also relentless in his attempts to make Tyler and Christian join. They just won’t do him the favor 😂 Either bc they’re not used to it (Christian, probably) or bc they’re not in the mood (Tyler, probably. Which imo has nothing to do with fandom or the ships, looks more like he’s on a bit of a break from social media. Maybe he just doesn’t have the energy for any of this atm - and really, who could blame him after the century we’ve all had this year).

Vlamis is doing all of this for fun and not bc he wants to piss anyone off. Sometimes he goes a bit overboard, his sense of humor isn’t to everyone’s liking, but hey, that’s normal. No one can please everyone.

(I remember some tweets and posts all “who should I pick?”). That’s hard to forget and sometimes hard to trust sincerity going forward.

Yeah, I get that. I think for him, Malex is way (WAY) more sincere than M/M ever was, I understand why it’s harder for some to believe tho.

Either way, I’m glad that he mentioned that he’s been talking to Christian about the whole thing. Ohhh, to be a fly on the wall when they had that convo 😏

His tweet was in reply to a fan convo about how much he loves teasing the Michael/F*rlex rivalry, and then someone else joined the convo and said Vlamis should “show some respect to Christian AntiDormi, Forlex  and show fans too”. They also accused him of “behaving like a child and creating a hostile environment in fandom”.

Not the first time people have been unhappy about Vlamis in that regard, and I think some fans have worried about Christian in particular.

Fans would probably feel less “hostile” towards Vlamis, if Christian’d join “the rivalry” in some way.  He’s not super active on social media tho, and from what I have seen, he’s not interacted with colleagues on IG like that before. (Uhm, and Tyler’s not much “help” either xD).

Those upset with Vlamis, had no way of knowing how Christian feels about it all prior to Vlamis’s tweet, and maybe they projected their hurt over the F*rlex teasing on Christian?

Either way, I think it’s good that Vlamis mentioned that he and Christian have talked about the whole thing, and that there’s no actual “bad blood” between them. It won’t necessarily make Vlamis’s F*rlex teasing more delightful for F*rlex fans (sorryyyyy 🙈), but at least they’ll know that Christian’s aware.

Vlamis has a bit of an asshole attitude, but I bet he’s made sure that Christian’s okay with it all, he wouldn’t keep teasing like this if he knew that Christian hates it or is cross with him bc of it. That would make the set an unpleasant work place, and that can’t be in anyone’s interest.

Attacking Vlamis over it is not okay, but I can understand that it’s not the nicest thing for those who like the ship. Remember how unhappy we were when Vlamis was still promoting M/M? We certainly didn’t like that. At all. And some people were VERY cross with Vlamis about it (some still are to this day…).

Cut F*rlex fans some slack, nonnie. They just want to enjoy their ship in peace. Being reminded of the fact that a large portion of the fandom doesn’t want it to happen, or hopes it’ll at least be over quickly, probably doesn’t spark joy.

We also have a tendency to happily “gloat” about Vlamis’s teasing (🙈I’m definitely guilty of that, although I’m trying my best to tag it accordingly so that people can avoid it), which in general is a normal thing to do, but in all likelihood not the most pleasant thing for F*rlex fans.

Again, attacking him is not okay, it really is not that deep, but let’s keep in mind how we felt last year and be kind to our fellow fans. 💕

Vlamis and Christian are good. ❤️

Imo Tyler’s lack of reaction to Vlamis tagging him in Malex posts has nothing to do with the show or any ships.

Tyler’s been mostly “absent” from IG for the past 2 months. Last time he posted a pic on his IG was in October, and he’s rarely posting stories. Looks more like he’s taking a bit of a break from social media in general to me.

Vlamis on the other hand, is his usual golden retriever on steroids self. The man will get jealous over F*rlex at the mere mention of the ship. xD

There’s no way of telling whether it’s bc there’s going to be tons of F*rlex on the show, or bc he just wants to cause some buzz and uses it as yet another reason to talk about Malex and declare his love for Tyler.

Personally, I don’t think they’ve filmed tons of F*rlex yet. Christian’s been in Santa Fe around the time they were filming 3x02 or 3x03 (I think it was 3x02, but that’s an assumption, not confirmed information). Of course he could’ve stayed for longer, and he can always come back for more. Just don’t think there’ll be the onslaught of F*rlex many of us fear (and some are hoping for).

I’m attending clown university tho, so there’s definitely tons of wishful thinking on my end involved  🙃🤡 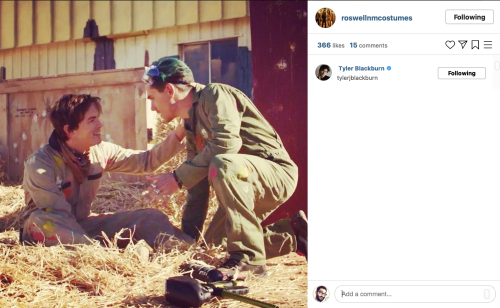 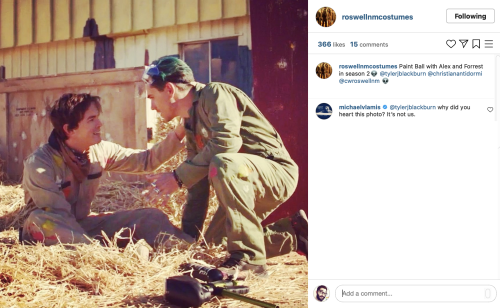 Also Alex and Michael constantly choosing other people, being happy with them and even saying “I love you” to others is seriously cheapening their cosmic soulmate story imo.

Exactly. So far they never even got a chance at a relationship (unlike Echo), and I just don’t care about seeing them with others at all.

Why waste Tyler’s and Vlamis’s incredible chemistry they have with each other????? Man, I’m so tired, cranky, out of fucks to give and downright petulant.

Yeah, if he sticks around, I hope he’ll be a friend.

Ngl, I’d much rather they give us aaaaall the Alex & Kyle content in S3 tho. They deprived us of their friendship last season. THEY OWE US!

I also still (desperately) want Alex and Isobel to become friends (give me my Statler and Waldorf of Roswell, please). And I’d like to see Alex and Liz getting closer again. And can we please have Alex & Rosa interaction??? Would love to know Rosa’s opinion of Alex (back in high school and now)!

It’s always annoyed me that the friendships between the core 8 were neglected so often (in some cases we’ve only ever heard about them but never actually saw those people behave like friends on screen), just let them all be better friends to each other.

Let them be supportive and kind. Really hope the writing will be much better in that regard…