Baby twins ❤️ i just love them so mich owo

Life used to be simple for you. Peaceful. But the Savior had other plans for you, and in moments, she ruined what you thought was your one shot at happiness. Blinded by anger, you escaped the Mint Eye, but that triggered a series of events that would bring you further into the world of brothers Saeran and Saeyoung. And further into the twisted world of your love for them.

Besides with you? Hm. I’d enjoy being able to go out on a picnic together, it doesn’t matter if it’s during the day or the night. As long as I’m under the same sky as you, then I’m happy. Perhaps I could lay my head on your lap and let you run your fingers through my hair.

It’s supposed to about me, I guess… but I would have spent so much time trying to bake and cook things for you to enjoy. What would make my birthday great is the fact that I get to spend another four seasons with you.

I find them delightful, honestly. Some people tend to think they’re annoying if they’re woken up in the morning by them, but I think it’s just a part of nature and it makes my day feel so much better. When I was at Magenta, there was nothing but cold walls and no windows… now there’s nothing but blue skies and open-air for me.

The birds are a reminder.

#blog takeover saeran, #anon, #ask, #saeran
4 notes · See All
marshmallowprotectionAnswer
Ok ok last one! Do I know you? ‘Cause you look a lot like my future husband ;))

#that means he loves u, #anon, #ask, #blog takeover saeran, #saeran
7 notes · See All
marshmallowprotectionAnswer
hey! ray! saeran! if you had to choose between different eras (ie, the 1920s, the 1990s, the victorian era, etc) which would you choose and why?

I’m not so sure. I think both that you mentioned are interesting in their own right. I suppose that I’ve spent more time thinking about how much I want my special prince(ss) to look as lovely as I see them in my mind. I’ve always thought about how the romance or the prior era and how lovely it would be shower someone in my affection… wait… no…

I mean… don’t pay me any mind, I’ve said too much! Victorian era, but just leave it at that.

I only want to exist at the same time as you, my darling. :)

#blog takeover saeran, #anon, #ask, #saeran, #ray
5 notes · See All
marshmallowprotectionAnswer
Hey everyone, what do you think of mod kait?

She’s very sweet, you know? I don’t know how to deal with this overwhelming support that she gives and extends to me especially. I don’t even know how you guys handle that. It’s difficult for me to think that there’s a person that likes me so much that they would dedicate so much of their time to me. Haha.

Um, I appreciate her… I just… don’t know how to handle how passionate she can be about me. I mean… um… who wouldn’t feel conflicted and unsure of their own feelings when someone spends hours writing about you…? I do wish she would take better care of herself, she’s disabled, but… she’s like me, and she works herself into the ground… I wish she wouldn’t do that.

Insufferable. That’s the word that I would use to describe Kait. Have you ever seen an airhead babble for six hours about the same boy, over and over again to a choir of maybe six people? It’s laughable that she thinks that wasting her time writing like this will do her any good.

What I do like is that she doesn’t mince words when she needs to talk big. Pitiful little thing will cry at the sharpest criticism of herself but she’ll bite back if you mess with someone else. That’s a fighter. I like to see it. Hahaha… I’d like to break it.

Hm. I admire that she has the patience and humility to deal with some of the stress of the world on her shoulders by extending her energy to something that she genuinely enjoys. I know it’s exhausting to do things for others without thanks, but I don’t think that she wants that. I think that’s what I like about her, honestly.

She doesn’t care so much about what it means to do for others. All she just wants is to be someone that can help others feel better in their time of need. I love that she has faith in herself to do such a thing because, for a long time, I could see that she did not believe in herself. She believes in the kindness in the world, and how could one not appreciate someone so faithful to the motto that kindness saves?

She never gives herself enough credit, but I think she deserves to hear that she’s appreciated for what she does.

I still don’t understand the amount of patience that she has to put up with all of this writing and nonsense. I’ve never seen a more stubborn person in my entire life solely dedicated to making others smile, and quite frankly, it’s too sweet for even for my tastes.

Tch. I guess I have to say that I appreciate that she puts a lot of care into ensuring that people don’t leave without a smile. Although, it’s kind of hard to deal with the fact that she’ll blubber over any little compliment she gets. I mean, I get it, but geez.

Work on that, okay, darling? She’s horrid at putting herself into a fire for others but she’s always so blind to see that she’s draining herself of everything that she has.

#WHO ASKed tHIS, #THIS IS ABOUT VALIDATING YOU GUYS. NOT. ME., #blog takeover saeran, #se saeran, #ray mystic messenger, #suit saeran, #saeran, #anon, #ask
7 notes · See All
jujusaeText

yes i,,,, definitely put the boys and girl in my house on New Horizons

Saeran’s birthday is approaching and you don’t know what to get him. At least, until you hear him play the piano.

I really say the bear minimum and V keeps showering me with hearts. Plz sir I’m trying to get to Ray’s route

Saeran cannot stand to lose a single challenge and the greatest challenge that he’s ever been given is the one that he’s got going on with you.

You’re his prey and you won’t be getting out of his grasp. He’s done everything that he can think of to try and make you crumble and fall down to your knees, mouthing silent pleas of forgiveness and of devotion at his knees as you pray for his pity. It’s only a matter of time, only a few more fun games with his toy and you will be begging him to forgive you for your actions. You’ll admit that Ray was nothing more than a mere fantasy and that he was the only person that ever mattered.

You refuse to listen to him.

You’re a stubborn fool, that’s what you are, my dear.

And Saeran isn’t going to give up until you’re ready to confess to him everything he’s been whispering to you since he met you. Simple as can be, he’s excited about the prospect of having you acknowledge him once and for all. That’s all he’s ever craved and he can almost taste it. For somebody to look at him and see that he’s worthy, that he’s strong, that he’s real!

Yet, for some reason, the sight of you in tears doesn’t bring him as much pleasure as it used.

He wasn’t sure what it was about you but it seemed like you were determined not to crack just to spite him. Well, that’s what his head told him. You would fight him because you wanted your stupid pathetic airhead back, right? Why else would you try to grt into his head with those words of concern when he was in pain or when he felt frustrated?

His heart, black and as cold as it was supposed to be, whispered something else to him entirely. He didn’t dare think it aloud or manifest it into reality, because he would deny it. Saeran was starting to think that what he wanted from you wasn’t what he thought he wanted.

No, what his heart really wanted was dangerous and wrong for paradise. He couldn’t ever let himself think out of the line that his Savior carefully built for him. That was what he was supposed to want, and yet… No. No. Saeran couldn’t, no, wouldn’t allow any weakness to take him over but he could feel it growing in there.

If he let that feeling prosper then everything he had been building these past few years would be for naught. What would have been the point in anything, then? What was the reason? If what he wanted didn’t align with what he was supposed to know and want, what did that say about him?

Didn’t that make him just as weak as that bug?

And that was the scariest thing of all.

I feel like if Saeran got a job in his after ending, I feel like he’d be an owner of a flower shop! So I got inspired to draw him as such! I bet he’d be an adorable florist! (: 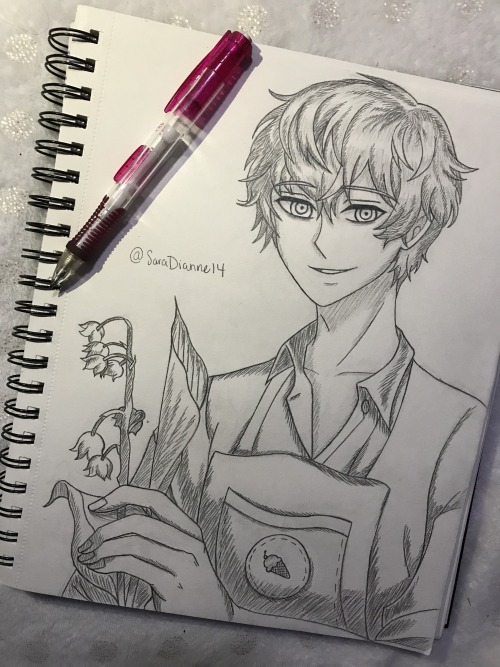 Ray would never tell you this but there have been nights where he’s felt like he needs to see you but he’s so busy and fraught with work that he can only spare a few meager minutes.

Those moments are hard, too hard to bear, and he never wants to leave your side. If he allows himself to be selfish he will become a monster that refuses to work. Ray adores you but he knows he needs to not smother you with his pathetic being. That’s why some nights he doesn’t come to your room, he walks to the garden below it and gazes up at your window where you often stare at the stars and moon and universe.

He likes to watch.

Ray has heard you admit that you’ve never seen the stars like this before and you love the view from your window so much. Your expression lit up, your tired eyes seemed now very envigored, and your smile grew tenfold. He had never seen somebody so happy in his life and it was all because he gave you the room that he thought you would enjoy the most. He’s happy beyond reason that he’s been able make you happy. All he wishes is to watch you smile and watch the starry skies for the rest of his life.

I’m sure this has already been done but I figured that a regular occurrence in the Choi household would be good practice for getting used to my new stylus.