I’m absolutely in love with this song 💖

(a/n bye this was such a sweet request to write and i hope i wrote it properly, i really think tomobe will like to achieve peak anime couple things with you but he’s also aloof and a bit shy)

request:  a tomobe x reader one ! for tomobe, they both get drinks and snacks together at 3 in the morning. hope this makes sense 🥺

Dating Tomobe was much more fun than people would think. He sometimes seems reserved and to himself because he always has his nose in manga and because he happens to be rather quiet himself.

The first time you two met was when you were on a train back home, coming from school. He had noticed you because of your anime keychain and he let a huff out, more of a breathy laugh, he was already amused. He let his eyes go up and took notice of your uniform, you didn’t go to his school and your uniform was foreign.

His eyes finally met your face and his lips parted in a gap.

You were stunning, from your stunning face structure to your hair. He had seen no one as beautiful as you, besides his manga “waifus” but those don’t count, he knows they can’t notice him.

As he stared for so long your neck tingled with instincts that someone might be staring, moving your head side to side slowly to see who it might be. Your eyes made contact with his, blush creeping up both your necks and to your cheeks.

He was handsome, his hair a bit shaggy but it suited him resting well on his forehead. He was a real cutie if you had to say to yourself but why was he staring and for so long?

Making the first move yourself, sliding over a bit see him properly you spoke up. “Uh, do you know me?” The voice you used was heavy to his ears, but to yours, you sounded confused.

“Yes, you are the woman in my dreams, something out of a shoujo manga.”

First, you stared blankly, utterly confused but then you let out a loud laugh, a hand flying to your lips to stifle the laughter.

Exchanging numbers was another fun activity. You would think you would do it sooner but the two of you were both too shy to ask. Tomobe overcame his fear before you. “Do you want to? His eyes falling everywhere but not once on you. “Do you want to exchange numbers?“

Now here you are, staring at your previous conversations with your boyfriend.

Re-reading his shoujo recommendations, promising it wasn’t anything dirty. Your hands ghosting at his photos of his anime figurines. His photos after his baseball practice were your favorite, he was dedicated to the sport. To have passion for something was admirable, and you always let him know.

Your screen was dimming, your eyes falling quickly to look at the time.

Groaning as you thought about how he was probably asleep, your eyes widening as you receive a text two minutes later.

do you happen to be awake?

you just replied though????

could’ve been a ghost…

well, does the ghost want to go to the gas station with me?

Soon your screen was lighting up and you couldn’t suppress your smile. You had gotten good at the whispering, so your parents wouldn’t hear. For odd reasons Tomobe simply didn’t care and talked in the same tone he always does.

“Its 3am,” Tomobe said seriously as if he was looking at the time to repeat back to you.

’‘No, I would’ve never known.” You giggled into the fun turning over to switch sides, your arm falling asleep.

“Can you sneak out?”

“Can you?” You spoke in disbelief, he spoke as if was an everyday thing for him.

Both lines got silent, you with frustration as he spoke so freely and Tomobe stayed quiet because he simply could. Looking at your window and thinking quietly to yourself you made a distressed sound. “You good?” Tomobe said with genuine concern, his voice laced with concern and curiosity.


“Mhm, just thinking about how I can avoid bussing my ass.” You joked, hoping to take the edge off. It worked because Tomobe let out a breathy laugh. God, you loved that sound.

It didn’t take long for Tomobe to find your house, actually not living that far. His hands up to catch you if you fell but you were just lifting one foot and then the other to escape. “What’re you doing?“

“This is what they do in anime.”

Playful hitting his chest you took his hand and laced it with yours, blush creeping up again. You both were young and naive, both of you in your third year of school but it was a simple pleasure coming from holding each other’s hand.

“Why’d you want to go to the gas station?”

Tomobe didn’t know himself. He had taken this advice from Sanada-senpai. He told him he should be spontaneous, so his girlfriend wouldn’t lose interest in him. He also saw this idea in the manga, but he wouldn’t tell you that part.

It wasn’t cold, nice and warm for a 3 am run to the gas station.

Stopping in your tracks as your face scrunched up in frustration again but this time directed at you. “I forgot my wallet.” you huffed, turning your body to retract back to your home. “It’s fine.” Tomobe pulled you back, “I got it.” he added.

Nodding slowly, you let yourself blush. Such a gentleman!

Finally entering the gas station, you skipped around, you didn’t know what you wanted and it seemed neither did Tomobe because he just followed you around. “Do you know what you want?“ You were looking up at him while you are squatting down, he was staring down at you and for some odd reason, it made his heart clench.

Is what both of you were thinking about, “You okay there?” You giggled and held the big bag of potato chips to your chest, “we can share these.” You sweetly said, again making his chest clench.

“You can pick the drinks, surprise me.“ Softly shoving away, for he would just wander around you if you didn’t.

He returned with two cherries flavored drinks, well, you did say surprise.

Eventually, you made it to the counter to pay after picking up sweets along the way. Tomobe never questions, rather he stayed with a content smile, letting out the breathy laugh you loved when you shoved him. Paying was simple and easy, quiet too. The cashier must’ve known you were teens, mumbling under his breath about ‘young love.’

Stepping outside felt amazing on your skin, the AC in the station too cold for your liking. Sitting on the curb, near the entrance door Tomobe sat close to you. He looked like he had something to say, his eyes kept glancing everywhere but you.

Poking his cheek to catch his attention worked, his eyes falling on you but soon did his head. His head rested on your shoulder and he mumbled incoherently. “Wait, Tomobe, I can’t hear you.” You laughed. His hand moved to squeeze your arm out of comfort.

’'I said.” He huffed, his cheeks tainted with red. “I said I really like you, that’s all.”

Now it was your turn to heat up with the flustering feeling. So cute!

A quick peck was placed on your lips, a hug holding you close so you wouldn’t run off like you normally did after you two kissed. 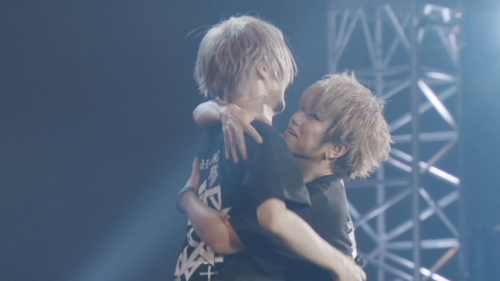 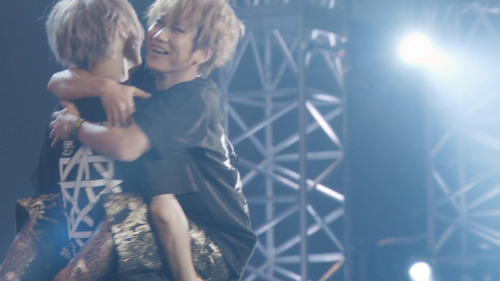