i’m assuming if you (his s/o) has a tattoo on an area that is hidden perfectly, maybe a few inks on your ribs or under your breasts, he would love to trace it with his calloused fingers and ask you about the story/meaning behind them.

i also definitely believe that even though sakusa might not like the idea of needles with ink poking through your skin, he’ll still respect your decision about a tattoo! and even if you keep it a secret from him, he’s still going to see it when you two sleep together for the first time.

though he won’t admit it, he loves to kiss your tattoo(s) and maybe one day he’ll be convinced to get one of his own.

Sakusa in no way, shape, or form needs a tutor, what he really needs is someone to take notes for him while he is away at games. When your academic advisor offers you a tutoring position to help increase your GPA you come in contact with the star volleyball player. Through text messages and notes you manage to form a strange relationship with Sakusa. Unfortunately for him Bokuto is one of your closest friends meaning that your paths eventually cross at a MSBY party. Drunk nights can lead to some unlikely friendships.

ughh… I feel sick. I need a fanfic of Sakusa being in a complete DOM mode. ugh…. please.. someone…

a/n: a big thank you to @forgetou and @neobakas for beta-reading this piece for me. ilysm <3

You were always incredibly considerate of Sakusa. It had been that way from the moment the two of you had met. You didn’t scoff at how he needed to be the first one in the locker rooms after practice, or laugh at his post-game rituals. You quietly adjusted to his odd habits, no fanfare or complaints. You never did so with any disdain nor treated his quirks as if they were a nuisance. You just accepted those parts of him without a second thought, considering it just as important to him as his limbs.

So yes, Sakusa fell for the kind girl that made him feel normal – the one that avoided taking him to crowded places, and stitched his jersey number onto a face mask. He thinks your jokes are hilarious, and he feels proud when he’s the one making you laugh. He likes it when you cook his favorite meals, and he appreciates the way you stay up to wait for him when he gets home a little late. He notices the effort you put into always looking pretty for him every day, always waiting for him to initiate contact for fear of invading his personal space.

But that’s just the thing.

Sakusa doesn’t want any personal space from you. He loves the way you smell, and the way your skin feels beneath his fingers. He daydreams about holding you in his arms, and rubbing circles along your back as you relaxed against him. He gets butterflies in his stomach when you kiss his cheek without asking him first, and he revels in the timid look on your face when you apologize for doing so.

He doesn’t mind. Why would he? Despite any preconceived notions one might have of him, Sakusa enjoys affection – from the right person. He’s not going to give Bokuto a high five, nor is he going to shake Hinata’s hand. Sakusa never fails to get the odd look from Atsumu when he slides his hand into yours without a second thought, or when he ‘allows’ you to brush his hair away from his face.

Sakusa wants to scoff whenever he hears that phrase. He doesn’t allow you to touch him. He yearns for it like his lungs need air.

So of course he notices when you try to keep him at arm’s length. 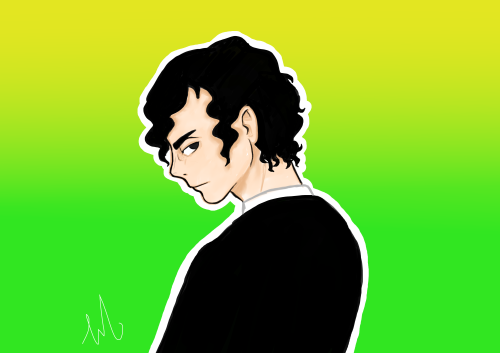 CW warning for mentions of OCD; nothing explicit, but it is mentioned and talked about in a little bit of depth, but overall theme is comforting :)

This is mostly brain rot that hit me last night after spending too long in the Sakusa tags but,, bare with me this is the best I could dribble out in an hour ok. Probably should have put more thought into this for my first hq fic thing but you know what. thats just me baby

Ok hear me out

I myself personally do not have OCD, but I am currently studying it and have friends with it so I know a fair deal about how it works and how negatively it can affect your day to day life. (If any dear readers do suffer from OCD, know that you are always understood and appreciated on my tl ok I love u sm and you’re doing a fuckin great job)

And like… boy, if you land Sakusa as a boyfriend ur one lucky mf

I don’t know whether or not his phobia of germs runs deep enough for it to be comparable to that of OCD, but I think regardless of whether or not he has the same struggles as you, he’d understand 100% where your fears come from in that regard and he’ll try really hard to help you as best as he can.

I mean, truth be told, he’ll feel pretty damn honoured that you’ve let him into your life like this, with this proximity - his own personal hygiene puts your mind at rest to a considerable degree, if that’s something you struggle with. After all, not all OCD cases are based on germs or dirt! Regardless of what shape or form your condition affects you, he’s so patient and mindful of every little thing that seems to bother you, he’ll make note - mentally and physically, if need be - and trust me when I say you can rely on this man to look after you in whatever way you may need.

a/n: this idea was originally meant for something else, but idk how and why i brain dumped so much that here we are instead. do let me know if you enjoyed it! ❤️

Northern lights were always a sight to behold. Colours of the rainbow took turns to display their artistic talent, weaving seamlessly into one another as they painted the sky, putting on a magnificent show for those below and above. They could awaken the sun from its slumber to gleam the dark canvas with strides of red and orange, or coax it back to dreamland by draping a curtain of blue and green over it. If they were feeling adventurous, colour palettes that were deemed jarring would be explored to create a bold statement, which were always a visually gratifying end product.

Given the opportunity, such beauty should be admired in a place that knows no boundaries, where the harshness of the frosty winter air that bit through the layers and layers of clothing into one’s skin would all vanish once they were enticed by the allurement laid before them. It was as if the dance of the aurora lights illuminating the midnight blue sky were a ray of hope in midst of chaos surrounding them.

Many often sought the alternative to witness and experience such picturesque spectacle. With a few tweaks here and there, it is possible for everyone to have a near equivalent experience. Add some loud banging music, waves of intoxicated bodies sliding against each other, thin fabric sticking on the surface of skins from the hot and humid air, whiffs of tobacco smothering the musty smell of sweat, and there you have it. Oh, along with flashing and blinding neon lights bouncing around the walls of the confined space.

Sakusa would pay thousands to see the real deal instead of this ridiculous faux. How was this even considered an alternative in the first place?

To him, nightclubs were hell, not the paradise others found it to be. He couldn’t comprehend the fun and excitement in staying up all night with cheap booze, keeping the unnecessary adrenaline pumping. Especially having to shout over the blasting music just to say a few words to each other. The whole thing sounded exhausting already.

It wasn’t that he was too old for this and not knowing how to have fun as a young man, he just simply knew his preferences. Sakusa would rather spend the wee hours catching up on beauty sleep. Enjoying a few drinks at a bar or pub, preferably with some jazz music, would be perfect to destress and chill.

So why was he in this so-called hell of his if he detested it so much?

Because of one fucking dumb blonde.

That one blonde that was glaringly noticeable in the sea of bobbing heads below.

That one blonde that needs to be taken care of like a child despite being a full-grown ass man.

If he had the money, Sakusa would have opted for a studio instead of sharing an apartment with someone else. He prayed that his housemate would be on the same wavelength as him, but god decided to spice up his life. Cue Miya Atsumu.

A/N: this is kind of a shitpost chapter but i think it’s fun so thank you for reading and enjoy :)

i may or may not be writing a hanahaki fic with sakusa…. idk if ill post it, depends on how it turns out

A/N: Got the idea of the prompt from a tiktok vid I found fjsjfn like the one with ushijima’s 🍆 and just played with it lolll (ctto pls your the best) anyways stay tuned on how that conversation turned out in the next chapter 😘

Kuroo: hey, do you have a bag that I can borrow?

Y/n: the only bags I have are the ones under my eyes, and they are specifically designed to carry the burden of my existence.

Kuroo: literally all you had to do was say no…

Tanaka: for fucks sake- look, I am not trying to ask you to marry me, I am trying tO SAVE YOU!!

Konoha: are you okay?

Y/n: *seductively* talk dirty to me~

Y/n: you’re are just mad that I’m more articulate than you!

Bokuto: well… well I am more smarter than you!

[Y/n and Atsumu glaring at each other]

Osamu: do you smell that?

Suna: *sniffs the air* what?

Osamu: *points at Atsumu and y/n* the scent of sexual tension is in the air.

I JUST GOT MY PEN AND THIS IS THE FIRST THING I DID WITH IT,,,, let me try omi and mullets 🤩 not done yet ofc

peep me on tiktok 👀